3Applied research bureau of the police of Kermanshah, Iran

Copyright: © 2014 Jalilian F, et al. This is an open-access article distributed under the terms of the Creative Commons Attribution License, which permits unrestricted use, distribution, and reproduction in any medium, provided the original author and source are credited.

Introduction: Drug abuse is one of the most serious problems in recent years in many countries. Social support is important benchmarks of health for people in avoidance conditions. The main goal of this study was to determine the drug abuse pattern, and social support status among men Kermanshah addicts, the west of Iran.

Methods: This cross-sectional study, conducted among men Kermanshah addicts, the west of Iran, during 2010, a total of 132 addicts, were randomly selected to participate voluntarily in the study. Data were collected from conduct interviews based on standard questionnaire and analyzed were by using SPSS-18 at 95% significant level.

Results: The majority of addicts were young (Mean: 30.4 years), and with little education. Opium (36.4%), Crack (21.2%), and Methamphetamine (12.9%) was the predominant drug. Inabilities to reject the offer drug use and have an addict friend the most reason to drug use were reported. Almost, 18.9% reported history of drug injection. 43.2% of the participants had already done drug cessation at least once. There was a significant correlation (P<0.05) between high level of social support and drug cessation.

Conclusion: Based on our findings, drug cessation was a significant correlation with high level of social support. It seems providing educational program to addict’s families for more support of patients at drug cessation can be beneficial.

Drug abuse is one of the most serious problems in recent years is the many of countries [1]. Addiction was defined a chronic, compulsive, or uncontrollable drug use, to the extent that a person (an addict) cannot or will not stop the use of some drugs, It usually implies a strong (Psychological) Dependence and (Physical) Dependence resulting in a Withdrawal syndrome when use of the drug is stopped [2]. Drug abuse is considered as one of the health, social, economic and political problem over the world. In addition, Iran for its specific geographical, social and cultural situations provided vulnerable situation for drug abuse. Research showed the 1.2 to 2 million people in Iran is addicts and 11 million people out of the population of Iran are struggling with their addiction or a member of their family [3,4]. Jalilian et al. carried out a research on prisoners in Kermanshah, the west of Iran and reported that 39.4% of the participants had history of drug abuse; furthermore, their study showed opium (33 %), methamphetamine (27 percent), and crack (11.7 %) are the highest substance abuse among them [5]. Drug addiction is a major problem in society ruining the life and leading to use of national assets for combating addiction and its defects [6]. Thus must be attention to drug abuse prevention program and addiction treatment. In this regard, social support, an important factor for drug cessation [7]. Social support is a function of social relations provided by members within a social network, and social networks generally relate to the number or contact frequency of family members, relatives, friends, and colleagues [8,9]. Beliefs and attitudes toward drug, as well as information and social norms about drug use influence drug behavior and may be formulated through interactions with members of the social network. Furthermore, because the social network functions as a social support resource, support concerning drug behavior can influence a member’s behavior [10]. Social support is important benchmarks of health for people in avoidance conditions. Social support in addiction treatment might decrease social isolation and in this respect decrease social rupture experiences and consequently, supports interpersonal relationship, and helps addicts in controlling problems and stress [11].

The main goal of this study was to determine the three kinds of support (family, friend and other significant) to drug cessation among men Kermanshah addicts, the west of Iran.

This cross-sectional study, conducted among men Kermanshah addicts, the west of Iran, during 2010.

The participants were men addicts who arrested by anti-drugs police (because all of them cooperation on drug dealing) in Kermanshah, the west of Iran. One hundred and thirty-two (88%) participants out of 150 signed the consent form and voluntarily agreed to participate in the study, which has been approved by the applied research bureau of the police of Kermanshah.

Data were collected from conduct interviews based on a standard questionnaire by a one of the research team. The interviews were performed in the first week of arrest.

Prior to conducting the main project, a pilot study was conducted to assess the content validity of the study questionnaires. The pilot study participants were 15 men addicts, similar to those who participated in the main study. The pilot study was conducted to obtain feedback about the clarity, length, comprehensiveness, and required completion time of the study questionnaires, as well as collect data to estimate the internal consistency of the measures.

Social support was evaluated by 12-item standard scale [12]. Each item was measured on an ordinal 5-point Likert-type scaling (1=strongly disagree, 5=strongly agree). Multidimensional scale of perceived social support, including three scopes (family, friend and other significant). Examples of the items are: There is a special person who is around when I am in need. The reliability coefficient for the social support scale in our study was .89, suggesting that the internal consistency was adequate.

The mean age of respondents was 30.45 years [95% CI: 29.05, 31.85], ranged from 19-65 years. More details of demographic characteristics of the participants (such as: age, education level, marital status, job, drug use by father, mother and sister or brother, and history of drug injection are shown in Table 1.

Table 1: Distribution of the demographic characteristics among the participants. 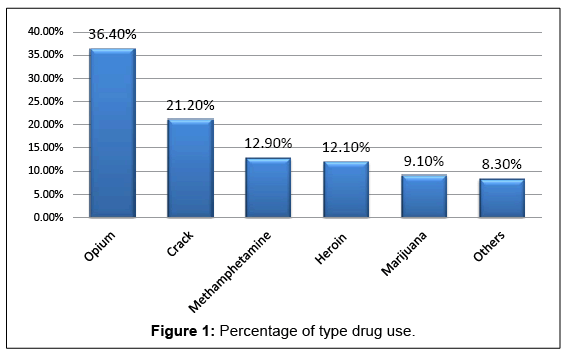 Figure 1: Percentage of type drug use.

Inabilities to reject the offer drug use and have an addict friend the most reason to drug use were reported (Figure 2). 43.2% (57/132) of the participants already did drug cessation at least once.

Figure 2: Percentage of most reason to drug use.

As can be seen in Table 2, a step-wise model building procedure was conducted and finally on 7th step the procedure stopped and the best model was selected, among the variables: age, drug use initiation age, and family support were the more influential predictor on drug cessation (Table 2).

Finally, in Table 3, it has showed the mean scores accrued of the family support, friend support, and significant other support.

Table 3: The mean scores accrued of the family support, friend support, and significant other support.

The mean age of respondents was 30.4 years, and the initiation age for drug use was 12. In addition, opium, crack, and methamphetamine were must drug abuse respectively. This is in line with the findings of earlier studies among Iranian addict [13-17]. Considering that drug addiction began at an early age are increasing, behavioral interventions provided for younger children with attention to industrial drugs, and psychotropic substance is necessary.

16.7% of a participant reported, their fathers had used drug and about 22.7% of them reported that their brothers had used a drug. In this regards, Weinstein reported that friends and peers important reason in predicting drug use. Many of study’s also reported families and friends have a role in the substance abuse; it seems that life skills education can be the usefulness results [18-21].

Drug injection could cause increased the risk of viral disease’s transmission such as hepatitis B, C and HIV/AIDS. Our findings showed 18.9% of participants reported to have a history of drug injection. These results can be warning to health policy makers in Iran; and should be the focus of special attention.

Based on the result, 43.2% of the participants already did drug cessation at last once. Many of the studies showed drug relapse in addiction is high [22-25]. In this regards Fridmann stated only that 20 until 50 presents of patients could continue to discontinuation drug use following a year [22]. In addition, Nurco et al. reported 66 presents this rate [25]. In addition, Keller et al. notes the rejection of the community is one reason for drug relapse [26].

Another of our findings was a significant correlation between high level of social support and drug cessation. It’s similar to another study [27-29]. In this regard, Brenda stated that special social support (family and friend) are very important at alcohol convalescence patients [28].

Drug abuse has a destroy influence not only on the individual addict but on the all family as well. Research showed collaborative effort of the whole family in drug cessation and relapse prevention. In the lack of a social support system, the earlier drug abusers will the most possible slip back into addiction [30,31].

Our result showed the mean of social support was a 29.10 (SD: 10.8), that showed a participant have acquired less than of half social support scale. Because of a social support role in addiction treatment has been shown, reinforced social support, and particularly through the family to addicts should be more be considered.

This research was supported by the applied research bureau of the police of Kermanshah, Iran. The authors declare that there are no conflicts of interests.

This study was funded by the applied research bureau of the police of Kermanshah, Iran.