Department of Electrical and Computer Engineering, University of Victoria, Canada

Copyright: © 2015 Herchak S, et al. This is an open-access article distributed under the terms of the Creative Commons Attribution License, which permits unrestricted use, distribution, and reproduction in any medium, provided the original author and source are credited.

Here we demonstrate a simple but robust interferometry scheme that connects an ultra-high quality factor whispering gallery micro cavity to a FC/PC connectorized single mode fibre. With this scheme, single Polystyrene beads with a radius as small as 25 nm can be detected at a signal-to-noise ratio of around 3.

The application of whispering gallery mode (WGM) microcavities for Nano detection and biosensing is a field of research seeing ongoing attention [1-15]. This method exploits the high quality-factor (Q) of the optical cavity for ultra-sensitive monitoring of shifts in the resonant wavelength. These resonant wavelength shifts are due to modifications in the optical properties of the resonator that can be due to the binding of individual nanoparticles or molecules. The typical procedure for monitoring the resonant wavelength of a microcavity includes scanning a tuneable wavelength laser while photo detecting the optical transmission which is monitored on an oscilloscope [3]. One issue with this method is the inherent uncertainty in the location of the transmission dip due to fluctuations in the laser wavelength, known as laser jitter. To circumvent this issue the use of an interferometer to produce a reference signal that follows the laser jitter has been used with an observed increase in sensitivity [10]. The demonstrated scheme, however, requires a split-off of the probe laser to the interferometer. This limits its application to power sensitive measurement where the maximum injection of probe laser power into the cavity is required. Here, we report that by simply inserting a FC/PC connectorized fibre as a Fabry P´erot (FP) interferometer (FPI) after the output of a whispering gallery cavity, one may reach similar detection sensitivity as reported in ref. [10] with a much simpler setup and without the necessity of split-off power.

In our first experiment, we connected a fibre Mach-Zehnder interferometer (MZI) in serial to the WGM sensor as shown in Figure 1a. A 630 nm central wavelength probing laser is fed with a frequency modulating ramp signal from a waveform generator. Then the power from the laser is sent through a polarization controller and subsequently enters a region of fibre optic taper. In the tapered region of the optical fiber a microsphere is brought into proximity with a piezoelectric Nano positioning device so optical coupling occurs. The power transmitted from the microsphere is fed to a thermally and mechanically stabilized MZI. The two output ports of the interferometer are detected by a balanced amplified photo detector (PD) upon being monitored by an oscilloscope. Through scattering matrix techniques, one may easily derive that the output signal received at the photodetector V(v) at probe laser frequency v follows

where Vout,max is the maximum voltage, ΔvFSR the free spectral range of the interferometer and f(v) the micro cavity transfer function expressed as

Where in the absence of mode splitting [16] (case A), f (v) has a single Lorentzian shape with Q0, the intrinsic Q of the cavity, v0 the cavity resonance frequency and K =Q0/Qc the normalized coupling parameter defined as the ratio of the intrinsic Q and coupling Q (Qc). In the presence of mode splitting (case B), f (v) displays a double Lorentzian structure with two dips centred at vl and vr corresponding to the cavity resonance frequency of the cosine and sine mode. Note through a least square fit procedure applied to Eq. 1, one may track the shift of cavity resonance wavelength upon particle binding. To validate our scheme, we first perform a numerical simulation on the system with the modelling parameters listed in Table 1. In Figure 2, we first constructed the transmitted signal in our model (blue dots) and conducted a least square fit (LSF). 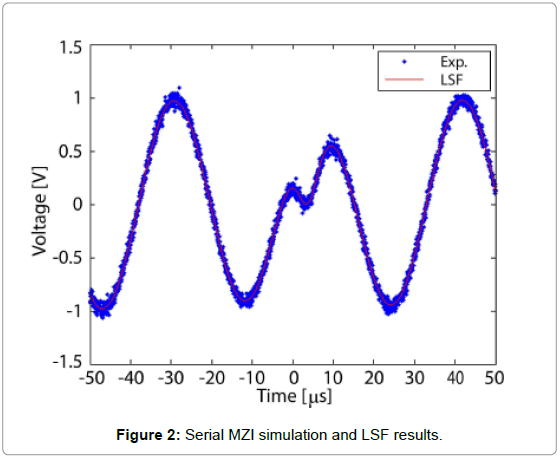 With Eq. 1 As shown, the fitted curve is in excellent agreement with the signal.

It is noted that there is a loss of information if the resonant wavelength of the microcavity is in proximity to the MZI sinusoidal zero point. This problem is apparent from Figure 3 where there is a clear jump in the resonant wavelength error near the point Δv=15 MHz. This location was confirmed to be the location of the sinusoidal zero point by both plotting the phase angle corresponding to the location of the resonant dip, and plotting the simulated data at this point. Because of this zero point, the sensing limitation of the MZI for a system with physical parameters given in Table 1 is for resonant wavelength shifts that can be detected with a 0.94 fm 3σ uncertainty. Therefore, although the employment of a balanced photo detector is favourable for Mach- Zehnder interferometry to cancel the excessive intensity noise, it is not suitable in this application as the output signal is bi-polar. To further overcome the inaccuracy occurred at quadrature points and simplify our setup, we adopt a simple Fabry-P´erot interferometer (FPI) scheme in the following section. The serial FPI set-up is shown in Figure 1b, which is identical to the previous scheme except that the MZI is replaced by a FPI and the transmitted signal is measured by a photodetector (PD). Here, the FPI is simply a fiber patch cord with (FC/PC) connectors on both ends. The connectors are not completely tightened so that a small portion of the light may back reflect between the connectors to form a FP type interferometer. It is also worth noting that in a typical micro cavity sensing system, an inherent FP cavity may already exist due to, eg. The minute back-reflection from poorly cleaned fiber connectors, which usually introduce sinusoidal ripples in the transmission spectrum. Therefore, one may use the following approach to improve the sensing resolution without introducing any new components in his setup.

Following similar derivations to the MZI, the output signal Vout (v) can be expressed as

Here due to the small reflectivity at the connector air interface, the finesse F is much less than unity. Therefore we can approximate the Airy function from the FPI transfer function [17] to the sinusoidal form above for simplicity. Again, with a least square procedure, one may track the cavity resonance shift from the particle binding events. For the validation purposes, the LSF was performed on data simulated with Eq. 3 using the physical parameters listed in Table 2. The fit is compared to simulated data in Figure 4, and the resonant wavelength error is displayed in Figure 5. As shown in contrast to the MZI case discussed in previous section, the FPI yields uniform estimation inaccuracy regardless the value of the cavity resonance wavelength. 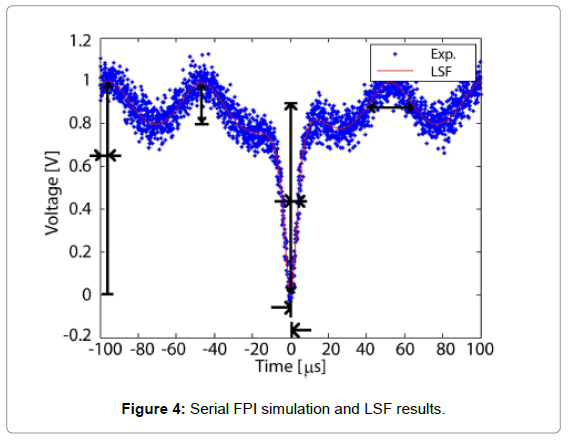 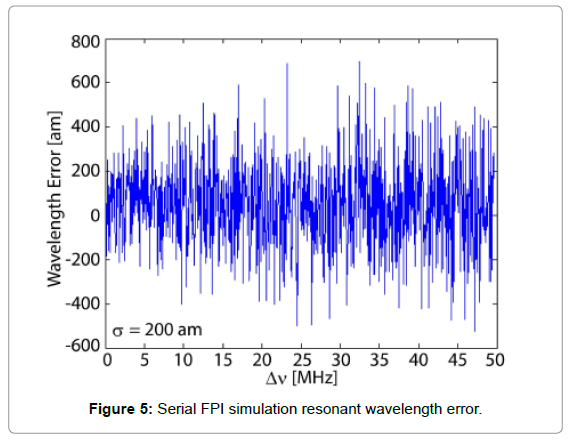 In the following experiment, we injected 25 nm polystyrene Nano beads in the buffer. As shown in Figure 9, due to the increased backscattering from the adsorbed Nano beads, mode splitting was observed in the transmission spectrogram. The shift of split frequency due to the binding events at 3.1 second was evident from the spectrogram. We further applied our LSF procedure in combination to a step finder to the spectrogram. As shown in Figure 10, at 3.1 second, a cavity resonance wavelength shift in an amount of 1.6 ± 1.0 fm was observed at the left resonance dip while a step of 3.1 ± 0.9 fm was observed at the right resonance dip. Equivalently, this is an average resonance wavelength shift of 2.4 fm and a mode splitting wavelength shift of 1.5 fm due to the binding event. 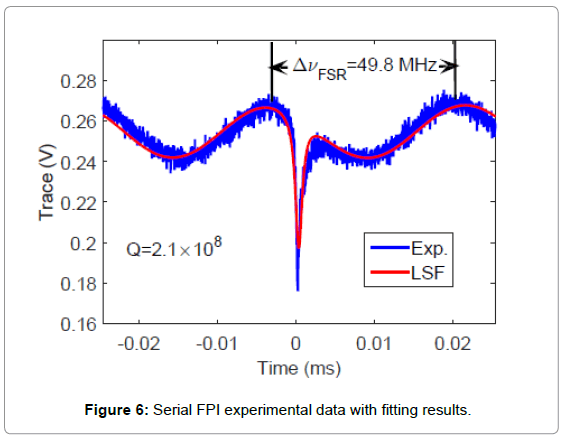 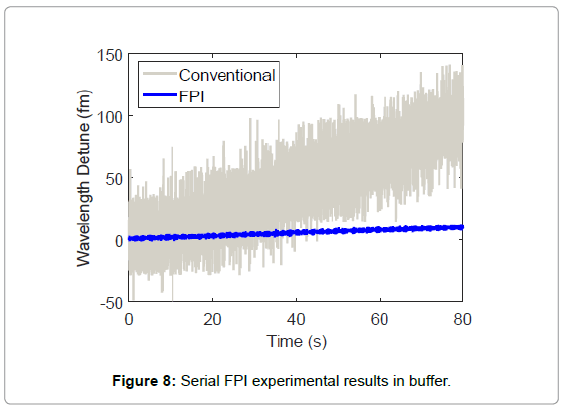 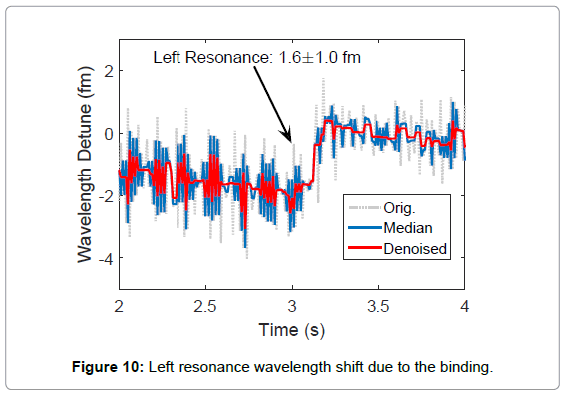 Figure 10: Left resonance wavelength shift due to the binding.

An algorithm for detecting steps from noisy resonant wavelength samples is demonstrated here. Discrete samples were collected as a trace of the resonant peak positions (grey dotted lines in Figures 10 and 11) which themselves were identified by least squares fitting. Because of the presence of noise, a de-noising procedure turned out to be necessary before numerical differentiation can be applied to the data. The denoising consists of two steps: first a median filter [18] was applied to smooth the noisy data in question and remove possible outliers (blue traces in Figures 10 and 11). To further reduce the noise, a de-noising technique based on total-variation minimization was further applied [19] (red traces in Figures 10 and 11), which is known for its ability to reduce random noise while preserving signal edges (i.e., steps in the present case). Numerical differentiation was then applied to the processed data and a total of N locations with the largest derivatives were picked as candidate step locations. Finally, least squares fitting were applied to fit the data at these possible step locations into a step function and the corresponding SNR was evaluated. A step was deemed to occur if the SNR exceeded a predetermined threshold which was set to one in this case. 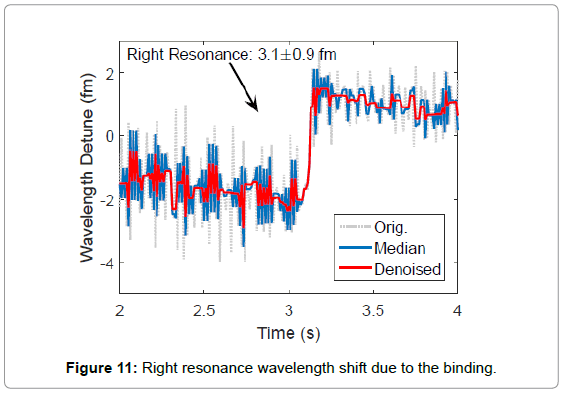 Figure 11: Right resonance wavelength shift due to the binding.

The reference interferometry technique is a versatile sensitivity enhancing element in Nano detection experiments. The serial connected interferometer approach was shown to be of benefit. This was achieved by carrying out an experiment with a FPI in line with a microsphere of loaded Q 2.1 × 108. The mean sensitivity of this experiment was 1 fm, showing an increase of 20 times improvement over the conventional sensitivity.

Although the in-line FPI approach shows slightly larger measurement uncertainty compared to that of the parallel MZI approach [10] due to the fact that no thermal stabilization to the FPI was adopted here, the simplicity of using a fibre patch cord -or even directly using the inherent FP cavity- makes the FPI an intriguing technique. Beyond simplicity, the FPI technique has been shown to improve resolution by an order of magnitude.

The author would like to thank Xuan Du for helping create the figures depicting the experimental set-up. This work was supported by the Natural Sciences and Engineering Research Council of Canada.