Copyright: © 2015 Ba ID et al. This is an open-access article distributed under the terms of the Creative Commons Attribution License, which permits unrestricted use, distribution, and reproduction in any medium, provided the original author and source are credited.

IRIS is a paradoxical reaction occurring in HIV-infected patient after initiation of highly active antiretroviral therapy (HAART). Incidence is estimated 12 to 19% of child starting HAART. IRIS with tuberculosis in non-HIV patients has not been reported in the literature. We report the case of an HIV negative 8 years-old girl who did develop IRIS and dilated cardiomyopathy during her treatment for severe disseminated TB (lungs, mediastinal lymph nodes, spleen, liver and kidneys). An appropriate antibiotic treatment was begun against the multiple sensitive mycobacterium tuberculosis strain retrieved: RHZE for 2 months followed by RH 10 months. The child appeared stable the 2 first weeks on treatment but not apyretic. She remained in the hospital for 6 months and experienced daily recurrent fever 39-40°C with rigors, diffuse bone pains, elevated transaminases and deterioration of chest infiltrates. Sequential abdominal CT and Gallium scans demonstrated a progressive involvement of liver, spleen, kidneys, medullar bones and abdomen lymph nodes for 2 weeks to 5 months. Then she gradually improved. Her complete immunological work-up at that point was considered normal. We concluded from an extensive review of the literature that this case highlights a paradoxical immune mediated reaction to Mycobacterium tuberculosis during an appropriate anti-TB treatment. IRIS results in clinical deterioration but is not a failure to treatment. Early recognition of IRIS could prevent unnecessary changes in anti-TB regimen.

Immune reconstitution inflammatory syndrome (IRIS) is a paradoxical reaction initially described in HIV-infected patient after the initiation of an antiretroviral therapy (ART). IRIS is mostly seen in HIV-infected patients [1]. The incidence is estimated between 12 to 19% in children starting ART [2-4]. Tb associated IRIS is characterized by a clinical worsening after the start of ART in patients receiving Tb treatment. It can also be diagnosed as a new presentation of Tb that is «unmasked» in the weeks following the initiation of ART and the exclusion of other causes that could explain a deterioration (such as antimicrobial drug resistance, drug hypersensitivity reaction, or another opportunistic infection) [5]. IRIS in association with tuberculosis in non-HIV patients has not been reported in the literature. We reported the case of IRIS in a child-disseminated tuberculosis.

An 8-old-year girl was referred to our hospital for fever and abnormal CXR, no medical investigation upon her arrival in Canada 3 years ago, unknown immunization status and no pets. Medical history noticed right thigh pain, weight loss over 2 months with sleepiness, fatigue and lack of energy. She coughed for 3 weeks presenting dyspnea on exertion. She suffered neither from any sputum, hemoptysis, thoracic pain nor wheezed any gastrointestinal symptoms. Our final diagnosis was immune reconstitution inflammatory syndrome (IRIS) in a negative HIV-patient. It took many weeks before IRIS manifestations decreased despite a good gain weight, resolution of CX-ray abnormalities and recovery of cardiac function. She was discharged after five months of hospitalization. Chest X-ray on 6 month-anti-TB (Figure 5). 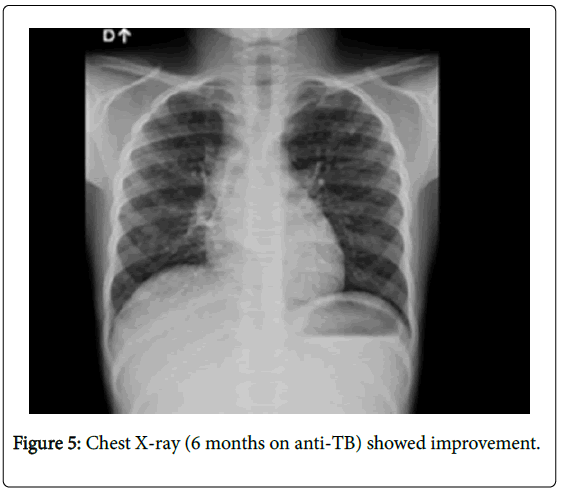 IRIS is a phenomenon observed in patients recovering from immunodeficiency. Generally, two clinical scenarios commonly occurred: an unmasking IRIS underlying unrecognized infection flares after starting ART; and parodoxical IRIS, resulting as the exacerbation of an often past known treated infection [5]. Pathogenesis of IRIS involve a combination of underlying antigenic burden, the degree of immune restoration following HAART, and host genetic susceptibility. These pathogenic mechanisms may interact and likely depend on the underlying burden of infectious or noninfectious agent [5-7].

In children, IRIS incidence is estimated between 12 and 19% of all children who initiate antiretroviral therapy [2-4] with a higher incidence in patients who have been diagnosed with an active opportunistic infection at the time of ART initiation [8,9]. Most data concerning IRIS originated from limited ressources settings. Risky factors for the development of IRIS include a high baseline HIV viral load before the initiation of ART, rapid decline in HIV viral load after initiation of ART, a lower baseline CD4 count before ART initiation, a high antigenic burden and disseminated opportunistic infection, initiation of ART concomitant with or soon after the initiation of the treatment of an acute infection, and lack of exposure to ART before initiating the current regimen [7]. IRIS causes in HIV-infected patients include infectious etiologies and non infectious causes [6]. Recent report also documented IRIS due to Mycobacterium bovis BCG in HIV-infected children in whom ART was initiated [10,11]. TB associated IRIS is characterized by a clinical worsening after the start of ART in patients receiving Tb treatment. It can also be diagnosed as a new presentation of TB that is «unmasked» in the weeks following the initiation of ART and the exclusion of other causes that could explain a deterioration [5].

TB is among the most frequent reported pathogen associated with IRIS. TB-IRIS can have a variety of clinical manifestations: fever, pulmonary disease, disseminated TB, systemic reaction inflammatory syndromes, acute renal failure [12]. Transient worsening of patient has been reported after the initiation of ART in severely immunocompromised patients [13,14] and paradoxical CNS TB reactions are well described in both children and adult HIV-negative patients [15,16]. No treatment has been prospectively studied in IRIS patients. Non-steroidal antiinflammatory drugs (NSAIDS) or corticostroids are commonly used to decrease inflammation in patients with severe IRIS [7,17].

Indeed, IRIS are not previously described in literature in negative HIV patients. We think that severe malnutrition is the main clinical risk causing immune impairement by developing IRIS in negative HIV patients. The mechanism is similar unlike in positive HIV by the restoration of the immune system. Genetic host susceptibility may certainly play a role in the development of this syndrome.

We concluded from an extensive review of the literature that this case highlights a paradoxical immune mediated reaction similar to the previously described IRIS in infected HIV patients but this time to Mycobacterium tuberculosis during an appropriate antibiotic treatment. Such an IRIS resulted in an apparent clinical deterioration but turned out not being a failure to treatment. In the future, early recognition of an IRIS in tuberculosis might prevent unnecessary changes in anti-TB regimen.