Copyright: © 2012 Deshmukh GM, et al. This is an open-access article distributed under the terms of the Creative Commons Attribution License, which permits unrestricted use, distribution, and reproduction in any medium, provided the original author and source are credited.

Many commercial processes are available for the removal of hydrogen sulfide from gaseous streams. Most of the processes use gasliquid contactors in which hydrogen sulfide is contacted with a reagent to give either another dissolved sulfide containing components (for e.g. alkanol-amin or hydroxide based processes) or elemental sulphur as a precipitate. Important representatives of the latter type are so called iron chelate based processes. The desulphurization technique of bifunctional redox iron chelate process can be used for treating natural gas or petroleum gas. The desulphurization and cleaning processes can minimize the atmospheric emission of gases like SOx, NOx and CO. Here the principle of redox reaction of metal chelate with hydrogen sulfide is used for desulphurization.

The reaction sequence for oxidative absorption of hydrogen sulfide in iron chelate solutions is mentioned below:

The overall chemistry is simple and consists of two sets chemical reactions.

The function of the chelant is to prevent the formation of insoluble iron compounds without interfering with the ability of the iron to undergo reduction and oxidation.

The number ‘n’ denotes the charge of the chelant anion. In the absorption step, H2S comes in contact with a liquid containing a soluble ferric iron chelate that is the active ferric chelate (Fe3+chelantn-) is converted to inactive ferrous chelate ( Fe2+ chelantn-). The H2S forms sulfide and hydrosulfide ions which are selectively oxidized to form elemental sulfur and the ferric chelate, Fe3+chelant* is reduced to the corresponding ferrous chelate, Fe2+ chelant*.

In the regeneration step, the ferrous chelate, Fe2+chelant*, is reoxidized with air, back to ferric chelate, Fe3+chelant*. The regenerated solution is then recycled to the absorption section.

The set of chemical reactions given below summarizes the chelant free radical-induced oxidative degradation chemistry and is considerably more complex:

The iron chelate can be regarded as a pseudo catalyst in the reaction of hydrogen sulfide with oxygen. The sulfur that is produced is easily recoverable from the slurry. Another advantage of iron chelate-based processes is that they essentially operate at ambient conditions, as illustrated in Table 1 [1].

The most of the study has been done on oxidative degradation of chelate during regeneration of ferrous chelate. Chen et al. [2] used HPLC techniques to study the degradation of NTA during regeneration of ferrous chelate. It is recommended to use of chelating agents that are less reactive toward the hydroxyl radical as Fe3+/Fe2+ redox catalysts for absorption of hydrogen sulfide to sulfur. Some experimental studies reporting on oxidative absorption of hydrogen sulfide by ferric chelates are available.

As per the literature available, it is clear that the chelated iron solution is modified in such a way to be the best solution for desulphurization of petroleum gases with minimum drawbacks. The use of liquid based redox process using chelated iron can be reinvestigated here for desulphurization of gases having low to moderate ppm of hydrogen sulfide to minimize further degradation or remove the other drawbacks.

The present experimental work includes study for oxidative absorption of hydrogen sulfide using ferric chelates of NTA, EDTA and DTPA, 10%, 50% and 100% concentrations of hydrogen sulfide in Fe-NTA solution and use of sodium thiosulphate in order to minimize degradation of NTA.

The following materials were obtained in the highest purity available and were used without purification.

Analysis of samples was performed using High Performance Liquid Chromatography (HPLC) equipped with a quaternary HP 1050 Pump and HP 1050 series variable wavelength UV/Visible detector. The manual injector is equipped with a sample loop of 20 μl. Nucleosil 100- 5 RP-C18 column (CHEMITO, Mumbai), 250 mm in length and 4.0 mm in diameter with a particle size of 5 μm.

The kinetic experiments for oxidative absorption of hydrogen sulfide into FeNTA aqueous solution were carried out batch wise in a thermo stated stirred cell reactor made up of glass having internal diameter 8 cm and volume 300 ml. A four blade glass turbine impeller of 1.5 cm blade diameter was used to stir the mixture as shown in Figure 1. Four symmetrically mounted glass baffles increased the effectiveness of stirring and prevented the formation of a vortex. The constant temperature water bath with constant stirring regulates the temperature of the liquid mixture during the experiments. The speed of agitation was maintained at 1000 rpm. The calibrated thermometer, tachometer, digital pH meter and rotameter were used to observe the temperature of solution, speed of stirrer, pH of the sample and flow rate respectively. A Kipp’s apparatus of 1 liter volume was used to produce hydrogen sulfide gas. 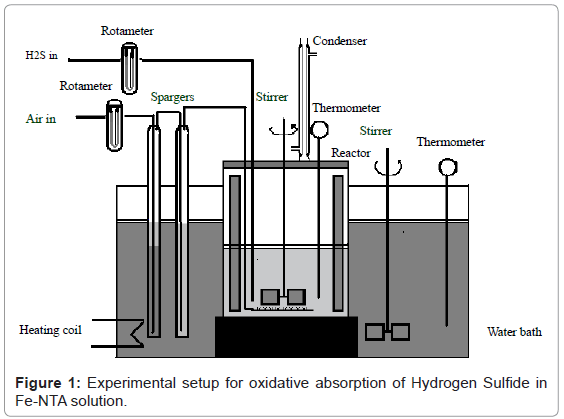 4. Initiating the reaction by carrying air and H2S. The H2S flow rate was maintained at 0.1 LPM and air flow rate was 1 LPM. Reduction of ferric ions to ferrous is started due to reaction with hydrogen sulfide and elemental sulfur is precipitated. Ferrous is converted again to ferric by oxygen present in air.

5. Steady state operation for 10 hours to study oxidative absorption of hydrogen sulfide for various reaction conditions. The samples were collected after an interval of one hour to measure the concentration of NTA.

There are several iron chelate based processes for the removal of hydrogen sulfide from gas streams have been developed over the years and commercialized. The most important difference between these processes concerned the liquid formulation and the way the degradation of chelate is suppressed. Obtaining kinetic data for oxidative absorption of hydrogen sulfide in iron chelate complex and the influence of the antioxidants on hydrogen sulfide removal, if applied in this sulfur removal process, will give the improved designs for desulphurization unit. This work dealt with these subjects and contributes to the development of a firm basis for designing of desulphurization unit.

Degradation of various chelates for oxidative absorption of hydrogen sulfide

The degradation of EDTA, HEDTA, NTA and other aminopolycarboxylate chelating agents for oxidation of Fe-NTA complex was reviewed by Chen et al. [2]. The percentage degradation of HEDTA, EDTA and NTA were 80% within 40 hrs, 80 hrs and 100 hrs respectively. Pekss and Salmas also studied the oxidative degradation of chelates at the pH of 3-6, temperature range 30 to 60°C. The degradation of EDTA, DTPA and NTA for oxidative absorption of hydrogen sufide in iron-chelate complex was studied at temperature 313 K and pH 6 as shown in figure 2. The ferric chelate ratio was taken as 1:1 and 1:2 as per the stability of ferric with the particular chelates and the initial concentration of ferric was taken 10000 ppm. The concentrations of chelates were determined after different time interval using HPLC. The percentage degradation of NTA, DTPA and EDTA were 30%, 22% and 66% observed in 10 hours respectively. The order of degradation was found to be: EDTA > NTA > DTPA. It was also observed that hydrogen sulfide was absorbed only into iron-NTA solution. Ferric chelates of EDTA and DTPA was found unsatisfactory as there was no separation of elemental sulfur but degradation was observed. It is found that NTA is far superior ligand for better absorption of hydrogen sulfide in Fe (III) chelate system. 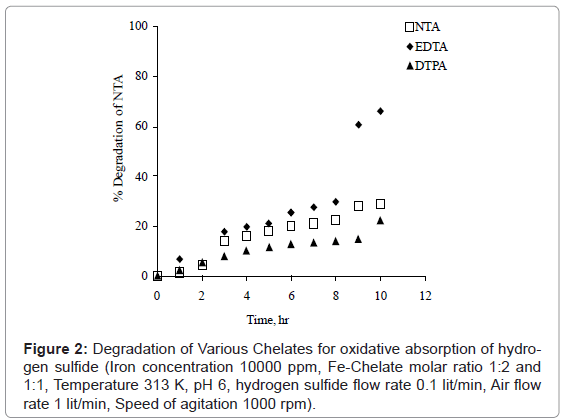 The effect of hydrogen sulfide concentration also plays most important role in NTA degradation due to reduction of ferric into ferrous during absorption process. Most of the investigators have reported removal of hydrogen sulfide from biogas using iron chelate solution and found suitable for removal of hydrogen sulfide from biogas. Horikawa et al. [5] have studied purification of a biogas by chemical absorption of hydrogen sulfide in an iron-chelated solution catalyzed by Fe/EDTA using continuous counter-current absorber. It is reported that for a biogas flow-rate of 1000 ml/min and 2.2 kg/cm2 pressure, approximately 90% and 70% of the H2S can be removed with the catalytic solution flowing at 83 and 68 ml/min, respectively. This means that above a flow-rate of 83 ml/min or with an appropriate ratio of gas contacting phases, it is possible to achieve total removal of H2S. 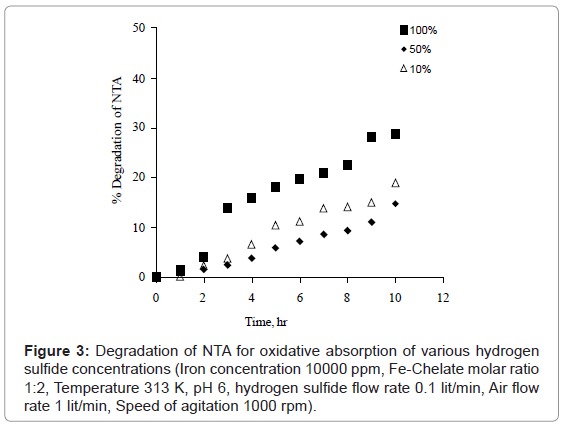 Formation of the hydroxyl ion during redox reaction of Fe-NTA may be responsible for the degradation of NTA. A number of additives that function as hydroxyl scavengers have been used to slow down or prevent radical-induced oxidative degradation. The added material reacts with hydroxyl ions or free radicals, thus preventing them from attacking, hydroxylation, and thus degrading the organic ligand. There are many such antioxidants that may be used viz. ethylene glycol, potassium citrate, sodium thiocynate, 1-butanol and sodium thiosulphate as antioxidants. 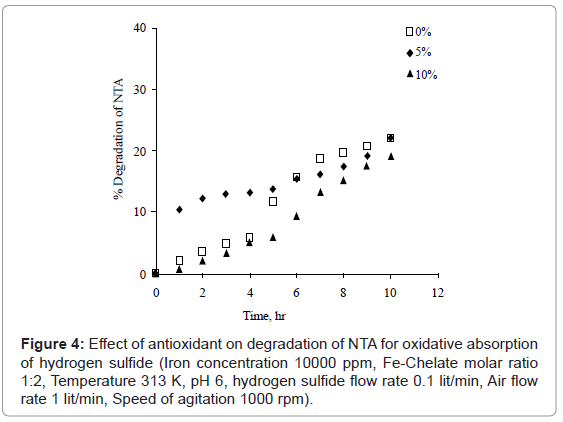 Kinetics of NTA degradation for oxidative absorption of hydrogen sulfide 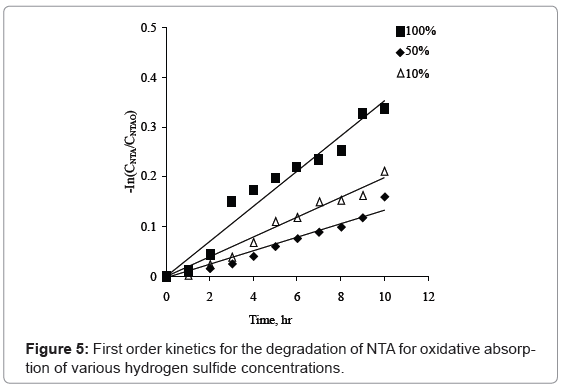 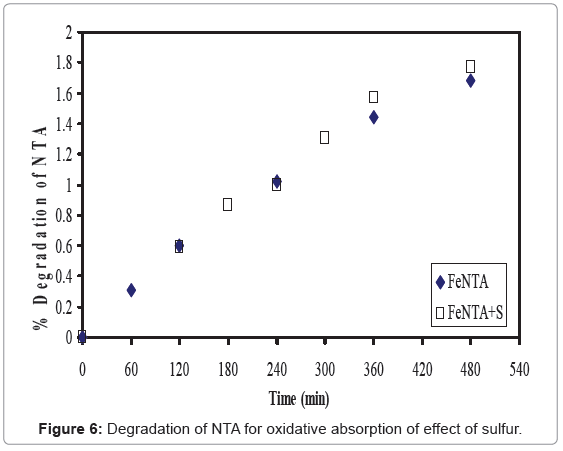 Figure 6: Degradation of NTA for oxidative absorption of effect of sulfur.

We are grateful to the University Grants Commission, India for providing financial support to this research work.