Copyright: © 2013 Varadharajan D, et al. This is an open-access article distributed under the terms of the Creative Commons Attribution License, which permits unrestricted use, distribution, and reproduction in any medium, provided the original author and source are credited.

Marine crabs are plays a vital role, depending upon the directly and indirectly in livelihoods the millions of people around the world. In the last two decades, the employ in the principal fisheries and farming parts has grown faster than the world’s population and employment in traditional culture management. The food from land is day by day decreased, as consumption of populations are high, since the people looking forward in seafood. The marine resource study is very important and the fisheries data are require for any coast, the true data depicting the state for future problems and solving the demand of food.

Crustaceans, such as crabs are very important for human beings, it has a significant quantity of protein, vitamins and other nutrients. They are used for feed and feed additive and extremely used in farm animal and making a medically valuable products. In recent years, the importance of crabs meat and other parts to the health and populations longevity and good price of world market. The demand for seafood currently exceeds, day by day increasing in populations, and occurs in overexploitations [1-3]. In the present study, the landing of crabs data very much useful for further research and welfare of fisherman. In Indian coast commonly available in fifteen edible crabs, since the twelve crabs are commercially valuable of local and export trade. In Indian coastal region of Nagapattinam coast the landing of fisheries data are very important, because these coastal regions a significant quantity for seafood supply for the nation. It is economically very important for the state or country, they are authorised to export, developing and managements of future research. The crab fisheries potential have been conducted by many workers in Indian waters [4]. The same potential has been conducted from Goa, and Palk Bay in Gulf of Mannar [5,6]. Tuticorin from Kakinada and the south Kanara coast Parangipettai coast,from Palk bay region [7]. In the present investigation an attempt has been made to study the fishery potential of commercially important portunid crab along Nagapattinam coast. From the previous crab landing reports the crab population is declining every year. So crab fishery resource study is essential to improve the population of the respective areas.

The study was conduct in different landing centers, viz, (station1) Pazhaiyar (latit 11º. 21 N long 79º 49 E), (station2) Poombukar (Lati, 11.13 N, Long, 79.849 E), (station 3) Thirumullaivasal (lati 12030’ N, long 71074’ E) and (station 4) Nagapattinam (lati 10º 15’-11º 12’46’’ N, long 79º 37’ 30’’-79º 50’12’’E). Data of catch and effort of crab landings were collected and recorded from four different landing centers. The study was made from April 2009 to March 2010. The collect data for watching the landing of crabs and then fisherman giving more information were collected by interviewing them personally. The average of daily commercial crab landing was worked out from the data thus obtained and raised to the number of fishing days to assess the monthly total crab landings of the centre. The data were, collected for all the months except the second of half April-16 to May-30. The methodology for the present study was followed by standard method [2,3]. 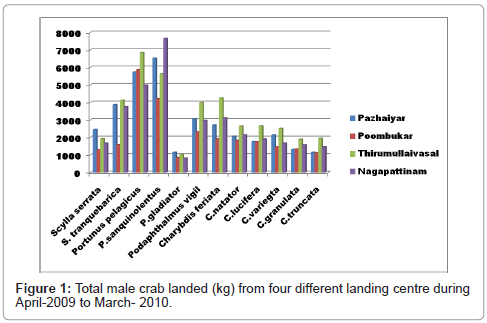 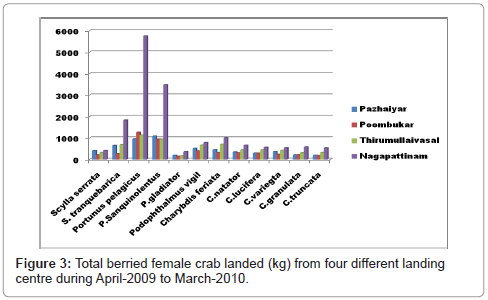 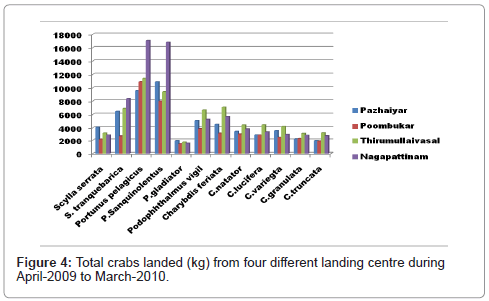 The landings of total crab in the present study is 240559.8 kgs or (241 t) reported in different four stations. The maximum landing of crabs was recorded in (station-2) Nagapattinam (73,385 kg) and minimum was recorded in (station-2) Poombukar (44,705 kg) followed by other stations. This term agreed with previous studies, the crabs landings in Parangipettai coast 79,445.6 kg, its reported by Soundarapandian [2] and similarly, Arukkattuthurai to Aiyyampattinam coast the landing of crabs 3, 88,196.032 kg, its reported by Varadharajan et al. [3]. The differences in the crab landings in the past two decades are due to many reasons, including development of improved fishing craft and gear, importance of crab meat in the national and international markets and changes in the environmental parameters. The crab meat is not only used for the human consumption but recently most of the crabs are being fished as the source of fishmeal. The present investigations the P. pelagicus and P. sanguinolentus constituted around 39% of the total landings forming a major crab fishery along Nagapattinam coast. However, in this study the commercial crabs viz., S.serrata, S.tranquebarica and P.pelagicus, P. sanguinolentus, P.vigil and C. harybdis sp in C. feriata, C. natator, C. lucifera are available throughout the study periods in almost all stations [8]. The P. gladiator, C. granulata, C. truncata and C. variegata, its fishery is purely seasonal and contributes very less as far as total crab fishery is concerned [9]. The quantity of minimum was landed in Portunus gladiator, Charybdis sp., are recorded of seasonally [2,3].

The crab fishery before and after tsunami did not show any marked variation except some minor differences in the landings has been reported that the increased landings of crabs again suffered a setback after Tsunami, resulting in a significant fall in crab landings along Indian coast [10]. Being a commodity of lesser export value, no commercial operations have been directed towards crab resource in a big way in the country. However, substantial quantities of crabs are landed every year as by-catches of fisheries trawlers and of indigenous fishing units throughout the country. The commercially crabs are important fisheries resources in marine environment have been collected extensively in part of their distribution range in Indian coastal waters. Since the crabs became important as exportable fisheries resources, overfishing have occurred more severely in some coastal regions [11,12]. As a result of overfishing of local populations, both the size and number of crabs have decreased. The crabs including the male species with strong muscle meat, the female species with nutritious eggs, the molting species with a new soft shell grown beneath the old hard one, and the juvenile species. Owing to their great demand in the markets, marine crabs are extensively cultured in many provinces of southern India. Another anticipated problem is the demand for small crabs by consumers because of their low price in the market. Despite all these problems, it might still be important to consider the application of some guidelines for commercial crab fishing in the coastal [13]. Therefore, the study presents an account of some case studies on the approach of fishermen towards the sustenance of the crab fishery resources they exploit and hence, of their livelihood. The crab fisheries are a highly dynamic system, which is constantly undergoing change due to natural and anthropogenic factors. There is having more or less negative effects on the resources of the coastal regions. In the present study, the different coastal fishery reports are significantly important for the state and the Indian government. Since, the crab landings data are essential to make out the contribution of crabs to the Indian economy. They are from different coast is supplying a significant quantity of seafood for the state, still there is no detailed information on crab catches from this region. In the present study an attempt has been made to identify the fishery potential of commercially important crabs of both marine and estuarine biotopes of Nagapattinam coast. In these coastal provides significant quantity of seafood for the state, so definitely solve the problem in future the demand of food and also the need for conversation strategies.