Copyright: © 2013 Watanabe S, et al. This is an open-access article distributed under the terms of the Creative Commons Attribution License, which permits unrestricted use, distribution, and reproduction in any medium, provided the original author and source are credited.

Conditioned Place Preference (CPP) is an easy-to-run experiment that is widely used to detect the reinforcing property of drugs. Most CPP experiments have employed post-training tests without drug injection. Here, a post-training test with drug injection was employed. C57/BL6 mice received CPP training with 0.3 mg/Kg or 3.0 mg/Kg morphine and were then tested three times: without morphine, with 0.3 mg/Kg morphine, and with 3.0 mg/Kg morphine. The mice trained with 0.3 mg/Kg did not show a significant increase in staying time at the drug-associated compartment in the drug-free test, but a significant increase was found in tests with the drug. The mice trained with 3.0 mg/Kg morphine showed conditioned preference in all tests and displayed enhancement of the conditioned preference in tests with the drug. The animals experienced environmental cues under the influence of the drug during the CPP training but were exposed to cues without the drug in the drug-free test. Thus negative results obtained in the post-training drug-free test may have been caused by differences in the stimuli the animals experienced.

Nomikos and Spyraki [4] have carried out post training tests with and without the drug after CPP with cocaine in rats; they found no difference between the two tests. Similarly, Spyraki et al. [5] did not find a difference between post-training tests with and without diazepam; however, they found conditioned place aversion by picrotoxin only in the post-training test with the drug injection. Morphine (1.0 mg/ Kg)-induced CPP in rats was also not affected by drug injection prior to testing [6]; in some cases a prior injection even reduced the conditioned preference induced by 1.0 mg/Kg morphine [7]. Thus, there have been conflicting effects of pre-treatment by different drugs on post-conditioning tests.

Tuazon [11] observed successful CPP after 1.0 mg and 3.0 mg/ Kg morphine injections in mice but not after injection of 0.1 mg/Kg morphine. Kennedy et al. [12] failed to obtain CPP after 0.25 mg/Kg morphine injection. Examination of the effects of drug injection in the post-training test is therefore particularly important after CPP with a lower dose. If the drug influences CS during CPP training, subjects may display conditioned preference in the test with the drug injection but not in the test without the drug. Here, the reinforcing property of low dose morphine was examined using the CPP procedure. The posttraining test was carried out with and without the drug. Two dosages were employed: 3.0 mg/Kg, which should cause CPP, and 0.3 mg/Kg, which should not cause clear conditioned preference in a conventional post-training test without the drug.

Twenty-eight male C57/BL6J mice were obtained from the Nihon Bio-Supply Center (Tokyo, Japan) for this study. The mice were 8 weeks old at the start of the experiment. The mice lived in a room under reversed 12D/12L lighting conditions. Temperature was maintained at 24°C. Food and water were freely available. Mice were treated in accordance with guidelines established by the Japanese Society for Animal Psychology.

Days 1 and 2 (pre-training test): Each mouse was placed in the center compartment. After 5 min, the doors to the other compartments were opened and the animal was allowed to move freely throughout the apparatus for 15 min. The amount of time spent in each compartment during the day 2 trial was used as the baseline. The floor and walls of each compartment were wiped with 70% ethanol after each trial.

Days 3–8 (CPP training): The mice received injections of morphine on days 3, 5, and 7, and saline on days 4, 6, and 8. On drugtreatment days, subjects were injected with morphine and restricted to either the black or white compartment for 40 min. On salinetreatment days, these subjects were injected with saline and restricted to the other compartment for 40 min. Compartment choice following drug administration was selected in an unbiased way (i.e., the baseline compartment preference did not affect this selection process).

3.0 mg/Kg test: The mice were injected with 3.0 mg/Kg morphine and received a test identical to the no-drug test.

Morphine HCl (Dainippon Sumitomo Pharma, Osaka, Japan Seiyaku) was dissolved in physiological saline. Doses were 0.3 or 3.0 mg/Kg in 10 ml/Kg of saline. Intra-peritoneal injections were used to administer the drug or saline. Following the injection, animals were immediately placed into the CPP apparatus.

The amount of time spent in the drug-associated compartment was measured to detect effects of CPP training. Planned multiple comparisons were conducted [13] and ANOVA was therefore not carried out. Because the purpose of the experiment was to evaluate the presence of CPP, the baseline was compared with the three tests using Holm’s correction for multiple comparisons. 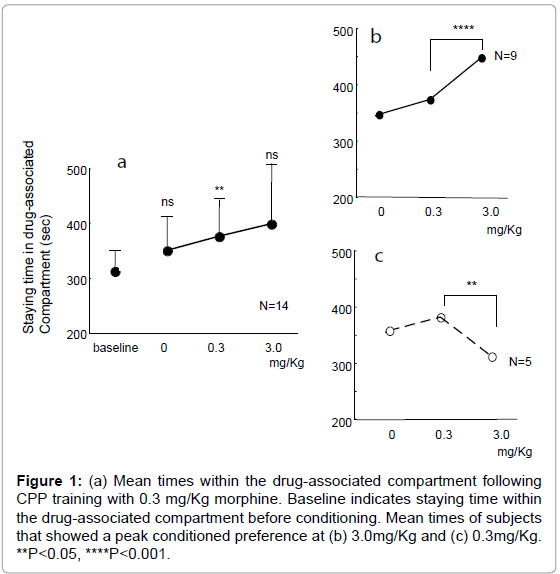 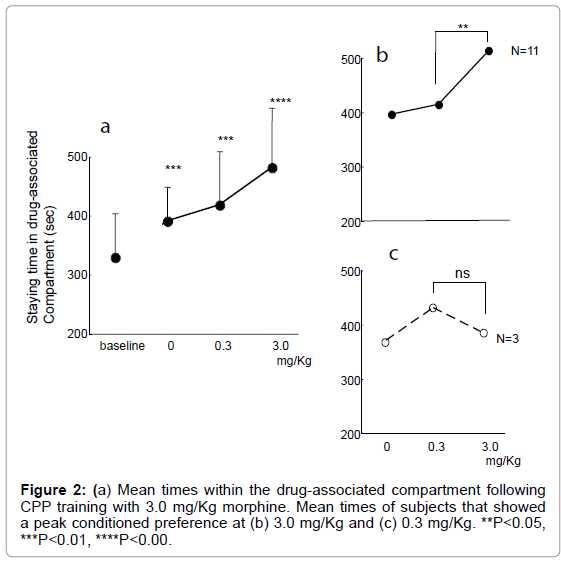 C57/BL6 mice did not demonstrate conditioned place preference in a post-training test without morphine after CPP training with 0.1 mg/Kg [11], 0.25 mg/Kg [12], or even 0.5 mg/Kg [14]. Thus the present results of the post-training drug-free test after CPP training with 0.3 mg/ Kg agree with previous reports. Because the preference demonstrated by the test after the drug injection indicates the reinforcing property of 0.3 mg/Kg morphine, the drug-free test may have produced false negative results. As noted in the introduction, the environmental cues (CS+) were cues under the drug-injected state, and cues without drug influence might have differed from the original CS+ for the animals. The CS+ functioned as a conditioned reinforcer during the posttraining- tests, and its reinforcing value became weaker without the influence of the drug. An interesting finding is that some mice showed stronger conditioned preference after 0.3 mg/Kg than after 3.0 mg/Kg. This phenomenon agrees with the observations of Bespalov et al. [8], who reported that mice displayed the conditioned preference most strongly in the test with the training dose of morphine. Dose response curves of morphine at the post-training test had peaks at the training doses [8]. This phenomenon is similar to stimulus generalization after conventional discriminative training, supporting the explanation based on stimulus control presented in the introduction. Unfortunately, there has been no report of 0.3 mg/Kg morphine discrimination in mice; however, ED50 of dose generalization after discrimination of 3.0 mg/ Kg morphine in mice was 1.12-1.32 mg/Kg [15,16]. Rats trained on discrimination of 3.0 mg/Kg morphine showed ED50 of 0.17 mg/Kg [17] or 0.89 mg/Kg [18] . Thus, it is plausible to assume that there is a subjective difference between 0.3 mg/Kg and 3.0 mg/Kg morphine in mice.

The results of CPP with 3.0 mg/Kg morphine also support the idea that the post-training test with drug injection is a sensitive procedure to detect reinforcing property of the drug. This enhancing effect agrees with results of Sakoori and Murphy [10], in which a higher dose (4 mg/Kg) was used. Unpredicted was the peak preference at 0.3 mg/Kg displayed by 3 mice, although their preference did not differ after 3.0 mg/Kg and 0.3 mg/Kg injection. Thus, the preference at 0.3 mg/Kg was probably attributable to variability of the data.

In conclusion, the present experiment suggests the possibility of false negative results as a consequence of post-training test without drugs. To generalize this conclusion, more experiments with different types of drugs are required.

This research was supported by the Global COE Program of the Japanese Government (D-9) at Keio University.