Copyright: © 2011 Takata K, et al. This is an open-access article distributed under the terms of the Creative Commons Attribution License, which permits unrestricted use, distribution, and reproduction in any medium, provided the original author and source are credited.

Dementia-associated neuropsychiatric symptoms, such as depression and apathy, are core features of Alzheimer’s disease (AD). Pathological hallmarks of AD include senile plaques, neurofibrillary tangles (NFTs), and neurodegeneration. Senile plaques are composed of amyloid-β (Aβ) and are surrounded by microglia, an immune effector cells in brains. Studies on responsible genes of familial AD have suggested that Aβ accumulation is a primary event that influences other AD pathologies, and the reduction of brain Aβ has been proposed as a therapeutic target for AD. On the other hand, microglial phagocytosis has been noted as an Aβ clearance system in the brain. In this context, the transplantation of microglia prepared from bone marrow cells may contribute to the clearance of Aβ in vivo brain. As a first step for this cell therapeutic strategy, we examined the preparation of microglia-like cells from mouse, rat, and human bone marrow cells by the treatment with macrophage colony-stimulating factor (M-CSF) and analyzed their phagocytic ability. In the cultivation of bone marrow cells collected from mouse, rat, and human, adherent cells on the culture dish were markedly increased by the treatment with human M-CSF. In addition, the adherent cells from mouse bone marrow cells were more sensitive to human M-CSF than that from rat bone marrow cells and more effectively expressed microglial makers, such as cluster of differentiation (CD) 11b, Iba1, and CD68. Furthermore, we demonstrated that a part of adherent cells derived from mouse and human bone marrow cells have phagocytic abilities of iron particles and Aβ peptides, and the treatment with human M-CSF significantly increased the number of phagocytic cells. Thus, we positively suggest that the microglia-like cells prepared from bone marrow cells by the treatment with human M-CSF could be a source for the cell therapeutic strategy for AD.

Alzheimer’s disease (AD) is characterized by progressive cognitive impairment as a consequence of extensive neuronal loss [1]. Almost all patients diagnosed with AD develop dementiaassociated neuropsychiatric symptoms at some stage during their disease [2]. Principal pathological features of AD are extracellular deposition of fibrillar amyloid-β (Aβ) and formation of intraneuronal neurofibrillary tangles (NFTs) composed of hyperphosphorylated tau. It is also well known that microglia markedly accumulate on the Aβ depositions (senile plaques) in AD brain [3]. Microglia are primary immune effector cells distributed ubiquitously throughout the central nervous system and have an ability as phagocytes. Although some studies have demonstrated that in some specific condition, microglia can be detrimental in the AD brain [4,5], many others have supported the theory that they are actually beneficial [6,7].

Aβ peptides are produced from amyloid precursor protein (APP) by combination cleavages with β-secretase and γ-secretase. Aβ is composed of 37-43 amino acid residues because γ-secretase, which is a protein complex containing presenilin (PS), generates the C-terminal of Aβ with different length [8]. In studies of familial AD, mutations in genes of APP, PS1, and PS2 have been found, and transgenic mice models carrying these familial AD-linked mutations enhance the Aβ production in their brains [9-11]. These findings strongly suggest that the accumulation of Aβ in brain is a primary event driving other AD pathogenesis, such as NFTs formations and neuronal loss (amyloid cascade hypothesis) [12].

A number of experimental studies have been performed to test the integrity of the amyloid cascade hypothesis. The studies of Aβ immunotherapy are principal one. Immunization with Aβ peptide in transgenic mouse models of AD significantly reduced the formation and deposition of Aβ and restored cognitive function [13-16]. In the experimental studies in animal models of AD, the phagocytic activity of microglia is proposed as an Aβ clearance system in the brain [17]. In a case report of the clinical trial of Aβ immunization also suggests microglial contribution in the clearance of Aβ in the human AD brain [18].

We previously transplanted with primary cultured rat microglia into the lateral ventricle in the Aβ-injected rats and demonstrated that exogenous microglia accumulated on Aβ deposit and increased Aβ clearance [19]. Thus, we speculate that the transplantation with freshly prepared exogenous human microglia may be effective for the Aβ clearance in human brain, and it positively suggests the cell therapeutic strategies for AD. In the clinical application of this cell therapeutic strategy for human AD, preparation of exogenous human microglia is a first and important step. However, ethical and technical difficulties in the primary-culture of human microglia preclude the preparation. Recent study demonstrated that the mouse bone marrow cells could be differentiated to microglia-like cells by the treatment with macrophage-colony stimulating factor (M-CSF) [20].

In this study, we cultured bone marrow cells collected from mouse, rat, and human in the presence of human M-CSF and characterized their abilities such as proliferation and Aβ phagocytosis. Thus, we evaluated a possibility of bone marrow-derived cells as a source for the cell therapeutic strategy for AD.

All animal experiments were carried out in accordance with the National Institutes of Health Guide for the Care and Use of Laboratory Animals, and the protocols were approved by the Committee for Animal Research at Kyoto Pharmaceutical University. Bone marrow cells were harvested from male C57BL/6 mice or Sprague-Dawley rats by flushing the femurs and tibias with Minimum Essential Medium (MEM)-α (Wako, Osaka, Japan). Cells were centrifuged at 300 g for 5 min and gently resuspended with lysing buffer, which contains 150 mM NH4Cl, 1.0 mM KHCO3, and 0.1 mM ethylenediaminetetraacetic acid (EDTA), to remove red blood cells. After the filtration through 70-μm-diameter nylon mesh (BD Bioscience, Billerica, MA, USA), cells were centrifuged again at 300 g for 5 min. Cells collected were resuspended with MEM-α supplemented with 10% fetal calf serum (FCS), plated into 60-mm-diameter dishes at concentration of 2.5 x 106 cells/mL and then incubated at 37°C in 5% CO2/95% air in the presence or absence of 2.0 x 104 units/mL human M-CSF (Leukoprol®, Kyowa Hakko, Tokyo, Japan).

At three, seven, and fourteen days after the cultivation, non- adherent cells were discarded by gentle rinse with phosphate buffered- saline (PBS), whereas adherent cells in triplicate wells were collected with PBS containing 0.25% trypsin and 0.05% EDTA, and then cells were counted with improved Neubauer-type cell counter plate (PHJapan, Hiroshima, Japan).

Human bone marrow cells expressing cluster of differentiation (CD)34 were purchased from Lonza (Basel, Switzerland) and were seeded at concentration of 1.5 x 105 cells/mL with Iscove’s modified Dulbecco’s medium (IMDM; Lonza) supplemented with 15% FCS at 37°C in 5% CO2/95% air in the presence or absence of 2.0 x 104 units/mL human M-CSF. At three, seven, and fourteen days after the cultivation, non-adherent cells were discarded by gentle rinse, and adherent cells in three views of 430 x 580-μm2 field from triplicate wells were counted under a light microscope (IX70; Olympus, Tokyo, Japan).

To assess phagocytic ability, adherent cells were treated with super-paramagnetic iron particles (Resovist®; 10 μg/mL, Nihon Schering K.K.,Osaka, Japan) or synthetic human Aβ1-42 peptide (Aβ42; 1 μM, AnaSpec, San Jose, CA, USA) for 12 hrs. The Aβ42 peptide used in this study is hydrochloride form and self-aggregates into oligomeric and fibrillar Aβ [21]. The smear patterns of this Aβ42 peptide in Western blot analysis were shown in our previous study [22]. After several rinses, cells were then fixed with PBS containing 4% paraformaldehyde. To visualize iron particles phagocytosed by adherent cells, Prussian blue method was utilized by the incubation of fixed cells with PBS containing 1% potassium ferrocyanide and 1% hydrogen chloride at 4°C for 30 min. The number of blue-colored cells in five or three views of 450 x 580-μm2 field from quintuplicate wells for mouse cells or triplicate wells for human cells was counted, respectively.

All of the data represent the means ± S.E.M. Statistical significance of differences between the treatments at each time point was determined by Student’s t-test (StatView, Abacus Concepts, Berkeley, CA, USA). Data was further analyzed by two-way analysis of variance (ANOVA) followed by Fisher’s protected least significant difference (Fisher’s PLSD) post-hoc tests with treatment and culture days as sources of variation. In the absence of human M-CSF, mouse bone marrow-derived cells gradually expressed microglial markers in a culture day- dependent manner, and 19.5% of the cells were CD11b and Iba1 double-immunopositive (CD11b+/Iba1+) and 79.3% of the cells were CD68-immunopositive (CD68+) at 14 days after the cultivation (Figure 2A). At the same time point, 25.6% and 55.4% of rat bone marrow- derived cells were CD11b+/Iba1+ and CD68+, respectively (Figure 2C).

Although we further investigated the expressions of the makers of astrocytes (GFAP), oligodendrocytes (ODC), neurons (βIII-T) and glial progenitor (NG2), these makers were not detected in the mouse and rat bone marrow-derived cells under all culture conditions examined in this study (data not shown). 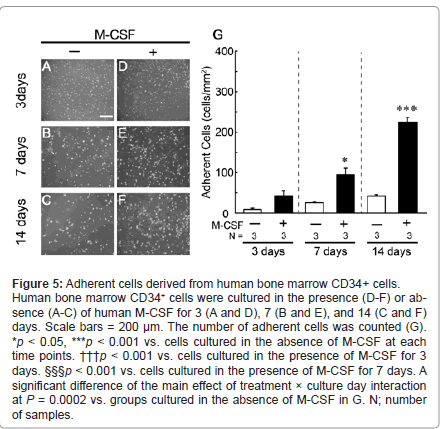 Previous study demonstrated that exogenously administered microglia effect to the clearance of Aβ in the experimental ex vivo study using unfixed brain sections from both AD cases and transgenic mice [17]. Therefore, we previously prepared rat primary cultured microglia from brains of new bone Wistar rats and directly transplanted it into the lateral ventricle of the Aβ-injected rats [19]. The trace of transplanted microglia was examined using the magnetic resonance imaging, and we found that exogenous microglia accumulated on Aβ deposit and increased Aβ clearance in the brain of Aβ-injected rats. In the study, we transplanted with microglia into the lateral ventricle, whereas several groups reported that intra-arterially injected microglia can migrate through an intact and/or injured blood-brain barrier (BBB) to the brain parenchyma [24,25]. Therefore, we speculate that the transplantation with freshly prepared exogenous human microglia from systemic circulation may be effective for the Aβ clearance in human brain, and it positively suggests the cell therapeutic strategies for AD.

In the clinical application of this cell therapeutic strategy for human AD, preparation of exogenous human microglia is an important step. Although it is possible to prepare human microglia from fetal and adult human brain [26,27], ethical and technical difficulties may preclude the clinical application. Previous in vivo studies suggested that mouse bone marrow-derived cells can migrate across the BBB, differentiate into parenchymal microglia [28,29], and furthermore accumulate on the Aβ plaques in mouse models of AD [30,31]. In vitro studies also showed that microglia-like cells can be prepared from the mouse bone marrow cells by the treatment with M-CSF [20] or granulocyte-M-CSF (GM-CSF) [32]. In this study, we treated human bone marrow cells as well as those from mice and rats with human M-CSF and investigated their abilities of proliferation and phagocytosis.

As far as we know, no study clearly demonstrates the Aβ phagocytosis in bone marrow-derived cells, especially human origin. Thus, the novel findings in the present study are summarized as following; (i) bone marrow-derived microglia-like cells are able to phagocytose Aβ, and (ii) proliferation of the Aβ phagocytic cells can be significantly increased by the treatment of M-CSF. Taken together, we positively suggest that the transplantation of microglia-like Aβ phagocytic cells derived from human bone marrow cells, furthermore embryonic stem (ES) cells and/or induced pluripotent stem (iPS) cells could be a powerful tool for the cell therapeutic approach in AD. Further studies in the biology and regulation of microglia-like cells derived from stem cells may provide a novel insight into the cell therapeutic strategies for AD.

We thank Dr. Toshio Kaneda (Faculty of Pharmaceutical Sciences, Hoshi University) and Dr. Osamu Honmou (Sapporo Medical University, School of Medicine) for helpful discussions. This study was supported by Frontier Research Programs from the Ministry of Education, Culture, Sports, Science and Technology of Japan; grants-in-aid from Japan Society for the Promotion of Science; and Kyoto Pharmaceutical University Fund for the Promotion of Scientific Research.