Copyright: © 2012 Pushparajan N, et al. This is an open-access article distributed under the terms of the Creative Commons Attribution License, which permits unrestricted use, distribution, and reproduction in any medium, provided the original author and source are credited.

The developed nations made mandatory to label all marketed processed food products with their nutrient contents to enable the consumer to maintain a healthy food regime. Reliable data on nutritional quality of fish is, therefore, very essential in aiding nutritionist and technologist in dietary formulations, processing and product development, as well as in nutrition labeling. The knowledge of the chemical composition of any edible organisms is extremely important since the nutritive value is reflected in its biochemical contents [1]. A newer species should be recommended for human consumption only after assessing the nutritive value of the species with regards to its nutritional merits [2]. Even though large numbers of marine animals are suitable for human consumption, our knowledge on its nutritive value is fragmentary. In this respect biochemical assay play a major role in recent years. In the present study biochemical estimation was performed to know the nutritional status of fresh and cooked meat of commonly available fish and shellfishes.

The specimens, Sardinella longiceps, Penaeus monodon and Portunus sanguinolentus were collected from Parangipettai, Mudasalodai and Killai fish landing centers (Lat.11º29’N Long.79º46’ E). The green mussel Perna viridis was collected from the Parangipettai station. Bunches of mussels were found attached to the artificial rocks near old jetty. This location is opposite to the marine biological station which is approximately 2 km away from the seashore, upstream. The average depth of the collection site is 1.5 m during low tide. The fresh and cooked tissues of the eight samples were oven dried at a constant temperature of 60°C for 24 hours and thoroughly dried (Figures 1, 2 and 3) were powdered by using motor and pestle. The powder was used for biochemical estimation by following the standard procedure. The biuret method modified by [3] was employed to estimate the total protein. Twenty five mg of dried tissue was taken and homogenized in a hand homogenizer with 1ml of glass-distilled water. To which 4 ml of biuret reagent (1.5 gm of CuSO4. 5H2O and 6.0 gm of NaK tartrate. 4H2O were dissolved in 500 ml distilled water in a 1 liter flask. Then 300 ml of 10% NaOH was added with constant swirling and the volume was made up to 1 litre with distilled water. The reagent was stored in a polythene bottle) was added in two installments of 2 ml each and the tissue grinder was cleaned before the content is being transferred to the centrifuge tube. After 30minutes, the sample was centrifuged (400 rpm) for 10 minutes, the supernatant was collected and the optical density was measured in a spectrophotometer at a wavelength of 540 nm against a blank reading. Blanks were prepared by mixing 1 ml of distilled water with 4 ml of biuret reagent.

The optical densities were compared with those of a standard curve prepared from Bovine Serum Albumin (BSA). The percentage of protein was calculated by using the following formula;

For the estimation of the total carbohydrate content, the procedure of [4] was followed. Five mg of dried tissue powder was taken and to this 1 ml of glass distilled water was added. Followed by 1.0 ml of the 5% phenol solution and 5 ml of concentrated sulphuric acid was added one after another. The optical density was measured in a spectrophotometer after 30 minutes against a blank at 490 nm. Blanks were prepared by mixing 1ml of distilled water with 1 ml of 5% phenol and 5ml of concentrated sulphuric acid. The optical densities were compared with those of a standard curve prepared from D-glucose.

The percentage of carbohydrate was calculated by using the following formula;

The chloroform -methanol extraction procedure of [5] was employed for extracting lipid from the muscle tissue. Four hundred mg of fine powder was taken in a test tube to which 5ml of chloroform -methanol (2:1) mixture was added. The test tube was covered with aluminium foil and allowed to stand for an overnight digestion. Then the mixture was filtered and the filtrate was collected in a pre weighed 10 ml beaker, which was then dried in a hot air oven. The difference between the weight of the empty beaker and beaker with residue gave actual weight of the lipid in the muscle tissue.

The percentage of lipid was calculated by using the formula;

Ash was estimated by incinerating the pre-weighed test material in a muffle furnace at 560°C for a period of 5 hours [6]. The residue was weighed and the percentage of ash was calculated. Triplicate was maintained for each biochemical estimation. 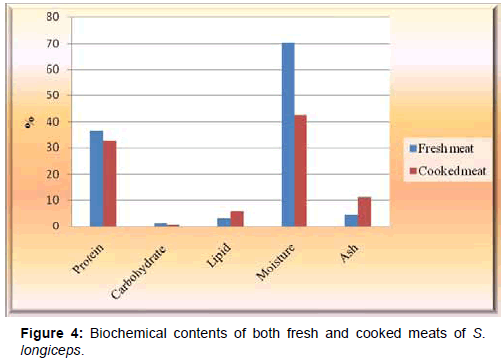 Figure 4: Biochemical contents of both fresh and cooked meats of S.longiceps. 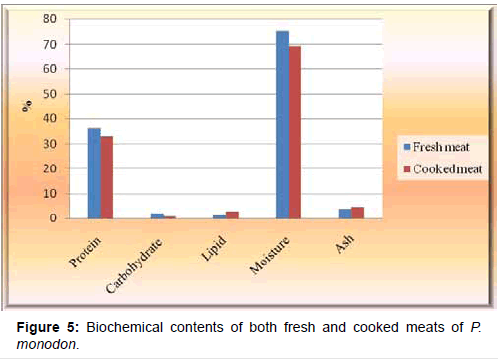 Figure 5: Biochemical contents of both fresh and cooked meats of P.monodon. 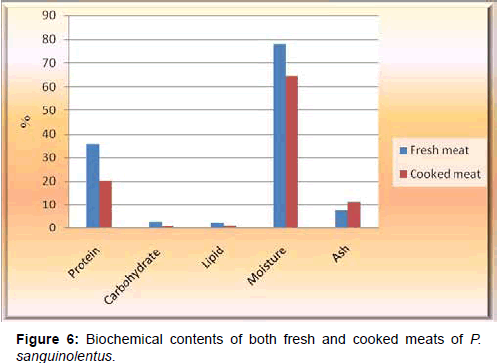 Figure 6: Biochemical contents of both fresh and cooked meats of P.sanguinolentus. 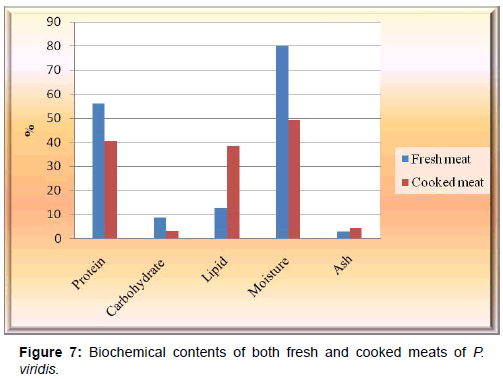 Figure 7: Biochemical contents of both fresh and cooked meats of P.viridis.

The proximate composition generally means the percentage composition of five basic constituents such as water, protein, lipid, carbohydrate and ash. The energy yielding nutrients like protein, lipid and carbohydrate are considered as macronutrients that are present in high levels; whereas non-energy yielding nutrients like vitamins and minerals are micronutrients and are present in small quantities. Even though minor components are needed only in very less quantities, these are essential for maintaining the life system. The proximate composition not only varies widely depending on several maturity stage, season and feeding regimes but also in different sexes. Knowledge on the protein, lipid and carbohydrate contents of meat helps to assessing the nutrimental qualities of organism in question. The knowledge of the chemical composition of any edible organisms is extremely important. Since the nutritive value is reflected in its biochemical contents [7].

Proteins are fundamental biomolecules in all aspects of cell structure and function. The fish proteins are normally made up of 20 common amino acids joined together through the peptide bond (-Co- NH bond). Fish proteins are rich in Essential Amino Acids (EAA), are easily digestible and nutritionally superior, to vegetable proteins. The average protein content of fish approximately ranges from 8 to 23 g/100 g wet edible portion. An increasing demand for good quality animal protein for the exploding population has led to effective and increasing exploitation of the aquatic resources. Fish occupy an important part in the world protein supply, accounting for about 10 percent of the total protein supply. The acceptability and easy digestibility of fish proteins make it very valuable in combating protein malnutrition, especially in children [8]. Proteins perform a wide range of functions and also provide energy of 5.65Kcal/g. Proteins contribute 15-20% of the total calories in the body for maintenance.

Carbohydrates are either simple or complex, and are major sources of energy in all human diets. These are the chief sources of energy constituents of compound lipids and conjugated proteins. Degradation products acts as promoters or utilized for synthesis of other substances like fatty acid and amino acids, constituents of muco – polysaccharides which form the ground substance of mesenchymal tissues. Inherited deficiency of certain enzymes in metabolic pathways or different carbohydrates can cause diseases. The ratio of carbohydrate was less when compared to the other nutrients such as proteins and lipids in animal tissues, especially in aquatic animals [14]. This may be due to the scarcity of carbohydrates and abundance of protein and lipids in the natural aquatic food web, and probably responsible for a common trend in aquatic organism to use protein as an energy source.

In the present study carbohydrate is uniformly high in fresh meats and showed reduction in cooked meats of all animals. Carbohydrate is maximum in P. viridis and minimum in P.longiceps and it was more or less similar in P. monodon and P. sanguinolentus of fresh and cooked meats. Carbohydrate already estimated in fish and shellfishes [9-13]. Lipids are broadly consisting of fats, phospholipids, waxes, sterols and sphingomyelins. Fats are the fatty acid esters of glycerol. Lipids, in combination with other biomolecules, form some specialised molecules such as glycolipids and lipoproteins. Lipids of marine origin are rich sources of Omega-3 (n-3) polyunsaturated fatty acids and they have pronounced hyocholestrolemic effect when supplemented in human diet. Lipids form the stored form of energy and also form a part of the cell structure. Dietary fat of fish is a good source of essential fatty acids and the fish liver oils are richest sources of vitamins A and D. Fats are concentrated sources of energy, providing 9.45K.cal/g and act as carrier of vehicles for A, D, E and K vitamins and promote their absorption. Adequate and good quality fat in the diet, with sufficient polyunsaturated fatty acids in proper proportions to meet the requirements of essential fatty acids, is necessary for good health, excess if fat particularly saturated fats in diet, leads to obesity, diabetes and cardiovascular diseases. Dietary fat provide essential fatty acids which are functional components of membrane lipids and also have other important metabolic functions. Fats are the precursors of biologically active compounds in the body to meet the requirements of Essential Fatty Acids (EFA) such as linoleic (n-6), linolenic (n-3) acids and also contain minor components like tocopherols, tocotriends and sterols which five natural flavours to fats.

Lipids are transported in blood, in combination with protein, in the form of lipoproteins. The patterns of blood lipids are based on the distribution of fat and cholesterol among different lipoproteins. Based on density, lipoproteins are characterized as Low Density Lipoproteins (LDL) and High Density Lipoproteins (HDL). High blood levels of LDL cholesterol result in accumulation of lipids in the cells. LDL has adverse effects on heart and leads to increased risks of heart disease by transporting cholesterol from liver to various tissues cause atherogenic effect (thickening of the inner coat of arteries). Relatively substantial amounts of HDL that scavenge excess cholesterol from the tissues to the liver for degradation has been gaining acceptance as being protection against heart disease and are therefore anti-atherogenic. In the present study fresh meat lipids are maximum in P. viridis (12.67%) and minimum in P. monodon (1.40%) But in cooked meat lipids are maximum in P. viridis (38.33%) and minimum in P. sanguinolentus (1.14%). Interesting observation is that except in P. sanguinolentus all other animals’ lipid contents are showing maximum values after cooking. This may be the contribution of cooking oil to the muscle lipids. The lipids are already determined in many fish and shellfishes world over [10,15-18].

In the present study the knowledge of the chemical composition of any edible organisms is extremely important since the nutritive value is reflected in its biochemical contents. A newer species should be recommended for human consumption only after assessing the nutritive value of the species with regards to its nutritional merits. Even though large numbers of marine fish, shrimp, crabs and mussel are suitable for human consumption, our knowledge on its nutritive value is fragmentary. In this respect biochemical assay play a major role in recent years. The biochemical composition fresh and cooked meats are the yardstick to measure and assess the nutritional quality of food resources.