Copyright: © 2012 Patel CR, et al. This is an open-access article distributed under the terms of the Creative Commons Attribution License, which permits unrestricted use, distribution, and reproduction in any medium, provided the original author and source are credited.

A simple Multicomponent Spectrophotometric method for simultaneous estimation of Metaxalone and Diclofenac Potassium in combined tablet dosage form had been proposed. Considering the absorption spectra of both analytes in the range of 220-350 nm in methanol, the four wavelengths of equal intervals of 40 nm were selected as 350 nm, 310 nm, 270 nm and 230 nm to produce calibration curves of mixture of analytes. The present method used inbuilt application of instrument (Shimadzu Pharm Spec 1700, UV spectrophotometer) to quantify Metaxalone and Diclofence potassium in formulation. The method had been validated in accordance with ICH guidelines for accuracy and precision.

Metaxalone (MET) is a muscle relaxant used to relax muscles and relieve pain caused by strains, sprains, and other musculoskeletal conditions. Chemically MET is 5-[(3, 5-dimethylphenoxy) methyl]-1, 3-oxazolidin-2-one (Figure 1). It is a white to almost white, odorless crystalline powder freely soluble in chloroform, soluble in methanol, 96% ethanol, deionized water and in propylene glycol, but practically insoluble in ether and water [1]. 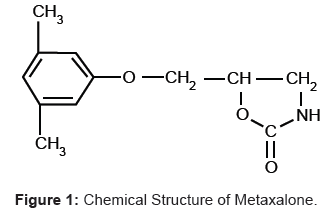 Diclofenac Potassium (DP), a Non-Steroidal Anti-Inflammatory Drug (NSAID), is 2-[(2, 6-dichlorophenyl) amino] benzene acetic acid, monopotassium salt (Figure 2). It is a faintly yellowish white to light beige, virtually odorless, slightly hygroscopic crystalline powder. It is freely soluble in methanol, soluble in ethanol, sparingly soluble in water and practically insoluble in chloroform and in dilute acid [2]. It is used to reduce inflammation and as an analgesic reducing pain in conditions such as arthritis or acute injury. 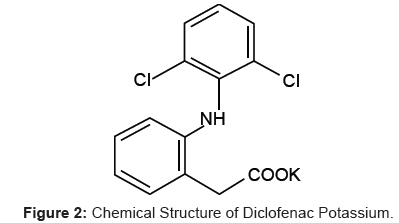 Metaxalone (400 mg) and Diclofenac potassium (50 mg) is available in combination as tablet dosage form and prescribed for muscle relaxant and pain relief. Literature survey reveals that few analytical methods like chromatographic methods [3,4], RP-HPLC [5,6] are available to determine MET and DP individually or in combination with other drugs. An attempt has been made to develop and validate new UVVisible spectrophotometric method for simultaneous estimation MET and DP in tablet dosage form.

The mixed stock solution of analytes was prepared by transferring 200 mg of MET and 25 mg of DP in 200 ml volumetric flask, dissolved in few ml of methanol and making up the volume with methanol. This solution was further diluted to get five serial dilutions containing 20 to 100 μg/ml of MET and 2.5 to 12.5 μg/ml of DP in Methanol. All mixed standard solutions were scanned over the range of 350 nm to 220 nm in multi component mode of spectrophotometer at medium scanning speed. The absorption of solutions were measured at wavelength interval of 40 nm, stored in the instrument, and processed by instrument. An overlain spectrum of mixed standard solutions is as shown in (Figure 3) The spectral data of these scans stored and processed in the instrument is used to determine the concentration of MET and DP in the sample solution. 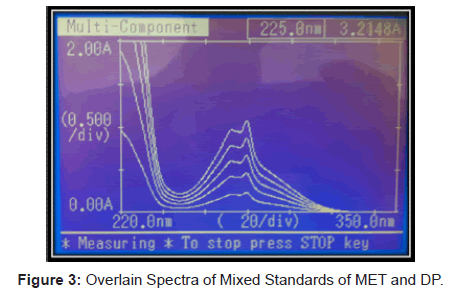 Figure 3: Overlain Spectra of Mixed Standards of MET and DP.

Twenty tablets were accurately weighed and crushed to fine powder. The tablet powder equivalent to 50 mg of MET (6.25 mg of DP) was accurately weighed, transferred to 50 ml volumetric flask, dissolved in small quantity of methanol with sonication and finally make up to mark with methanol. This solution was filtered through whattman filter paper No. 41. The filtrate was further diluted with methanol to get concentration of 60 μg/ml of MET 7.5 μg/ml of DP. 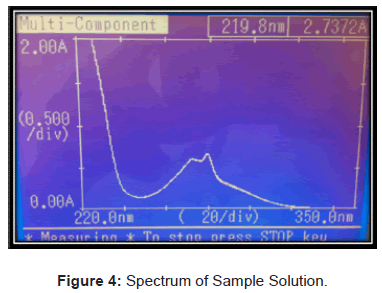 The proposed method of analysis for MET and DP in combination were validated as per the recommendations of ICH guidelines [7] for accuracy and precision. Recovery studies were carried out by addition of pure drug to previously analyzed tablet sample at three different concentration levels (80%, 100%, and 120%). The results of recovery studies are reported in (Table 2). While, precision of the method was determined by repeatability and intermediate precision (intra-day, inter-day) expressed as % Relative Standard Deviation (% RSD). Intraday precision was evaluated by analyzing concentration of MET (60 μg/ml) and DP (7.5 μg/ml) of standard and sample solutions at three different time intervals under the same experimental conditions on the same day, while inter-day precision was determined by analyzing above mentioned concentrations of solutions on three consecutive days (Table 3).

As the proposed method is specific to instrument having software for provision of such determination, selection of proper sampling wavelength and concentrations of mixed standard solutions are critical. Hence overlay spectra of analytes were studied carefully. DP has shown absorption in the range of 200-340 nm while MET was found to be absorbing in the region 230-300 nm. Considering common absorption of drugs, the wavelength range of 220-350 nm was selected for the study. The various wavelength intervals were tried to measure and process data by the instruments to determine the exact concentration of standard and sample solutions. The wavelength interval of 40 nm was found to effective to quantify both drugs in formulation. The concentrations of mixed standard solutions were selected on the basis of linearity of each analyte at their wavelengths of absorption. The care was taken while selecting the concentrations of mixed solutions such that the absorbance at four selected wavelengths was not more than 1.5 (considering % relative error by instruments).

The mean content of analytes in the marketed formulation were found to be 99.82 and 99.824% for MET and DP respectively, while recovery was found in the range of 99.15 to 99.70% for MET and 100.14 to 101.98% for DP respectively. The values of relative standard deviations of inter-day and intra-day studies were found to be less than 1%. Intra-day study also indicated the standard and sample solutions were stable for measurement for longer time. The limitation of the present study is need of inbuilt software and retaining the standards of both analytes for spectra of mixed standards. The assay and validation results confirmed that the contents of MET and DP estimated in the tablet dosage form were free from the interference of excipients.

The developed multi component spectroscopy method for simultaneous estimation of Metaxalone and Diclofenac Potassium in combined tablet dosage form is simple, economical, accurate and reproducible and can be conveniently adopted for the routine quality control analysis from its pharmaceutical formulations and bulk drug.