The Cigarette-Carrying Habit of Occasional Smokers

Copyright: © 2012 Zhu SH, et al. This is an open-access article distributed under the terms of the Creative Commons Attribution License, which permits unrestricted use, distribution, and reproduction in any medium, provided the original author and source are credited.

It has been hypothesized that one mechanism for occasional smokers to maintain a low frequency of smoking is that they often do not carry cigarettes with them [5]. When they do not have cigarettes with them, they will likely not smoke even if they develop an unexpected craving when going about their daily routines. On a behavioral level, therefore, the unavailability of cigarettes helps to keep some days of the month completely non-smoking. This could be a major smoking-related behavior that distinguishes occasional smokers from daily smokers. To our knowledge, except for one conference poster that reported asking this question with a convenience sample of occasional smokers [21], no study has tested this hypothesis with the general smoking population.

The present study tests these two hypotheses with a representative sample of smokers from a population survey: the 2008 California Tobacco Survey. The California survey includes a substantial number of Latino smokers, a group known to have a high proportion of occasional smokers [1,3-5,22]. In fact, it was the attempt to explain the particularly high proportion of occasional smokers among Latinos that led to the hypothesis that occasional smokers do not carry their cigarettes [5]. Thus, this study also analyzes Latinos separately from the other ethnic groups to check if the finding is specific to Latinos only.

California Tobacco Survey (CTS) is an ongoing population survey that has been conducted every three years since 1990 to evaluate the tobacco control program in California [23,24]. All of the CTS surveys used a modified Waksberg random-digit dialing telephone sample of households [25] followed by an in-depth survey of a subsample of adult household members designed to recruit a sample of respondents representative of the California population. For the 2008 CTS, this twostage sampling methodology included a total of 22,225 households with at least one member over 17 years old in the screener survey. Then, all young adults between the age of 18 and 29, all adult smokers, and a random subset of adult nonsmokers in the screener survey were included in the extended interview (N=10,397). The response rate for young adults was 47.0%, while the rate for older adults was 61.0%. The methodology for these surveys has been presented elsewhere in detail [26]. The survey response rate for population surveys has decreased in the last decade, but studies have shown that this decrease does not significantly affect the relative relationship among subgroups [27]. This study is based on CTS 2008, the seventh cross-sectional survey in the series [28]. The data collection of the survey and the data analysis for this study were approved by the Research Ethics Committee at the University of California, San Diego.

The survey first asked respondents “Have you smoked at least 100 cigarettes in your entire life?” If the answer was “Yes”, they were further asked “Do you smoke cigarettes every day, some days or not at all?” If the answer was “Every day,” they would be asked “How many cigarettes on average do you smoke per day?” If the answer was “Some days”, they would be asked “On how many of the past 30 days did you smoke cigarettes?” Current smokers were defined as those who had smoked at least 100 cigarettes in their lifetime and who are currently smoking every day or some days. Daily smokers were defined as those who answered “every day” in the second question. Occasional smokers were those who answered “some days.” However, if they stated that they had smoked 25 days or more in the past 30 days, they would be reclassified as daily smokers. This is in accordance to the classification of daily and non-daily smokers of other studies [1,29,30].

All current smokers (daily and non-daily) were asked the question as part of the extended CTS adult survey “Do you usually carry cigarettes with you?” The answers were Yes or No. About 0.5% (n = 8) of the smokers had missing values for this question (refused or responded “don’t know”) and were excluded from the analysis. 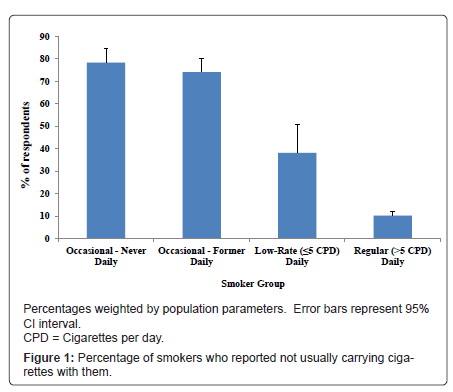 Figure 1: Percentage of smokers who reported not usually carrying cigarettes with them.

Note: All percentages are weighted by population parameters.
* CPD = Cigarettes per day.

Table 1: Percentage of smokers who reported not usually carrying cigarettes with them, by ethnic group.

Studies on youth who are experimenting with smoking have reported that they often “bum” cigarettes from others [34,35]. This suggests many of these experimenters initially do not carry cigarettes with them. Some of them become established smokers but never proceed to daily smoking. These are the never-daily occasional smokers. It is possible that many of these occasional smokers never developed a habit of carrying their cigarettes, and that helps keep them from increasing their smoking frequency to a level that leads to nicotine dependence.

One clue comes from a study in which former-daily occasional smokers were asked if they gradually reduced to smoke only occasionally or if they quit smoking and later relapsed to smoke occasionally [21]. The majority of them reported the quit-and-relapse route [21]. If this is the case with most former-daily occasional smokers, then the change of cigarette-carrying habit is more likely to take place after a prolonged quit attempt. This can be tested in future studies.

This study has several limitations. It is based on a simple survey question where smokers gave a global self-report on their cigarettecarrying habit. No details are available as to what proportion of the smoking days the occasional smokers actually did carry their cigarettes, nor what distinguishes cigarette-carrying days from non-cigarettecarrying days. Since occasional smokers are smoking some days, where do they usually obtain their cigarettes? Also lacking is the information that can help gauge how intentional it is for the smokers not to carry their cigarettes. The study, however, is the first to report a clear pattern of cigarette-carrying habit based on a representative sample. It provides a starting point for more comprehensive research in the future.

The strong association between not carrying cigarettes and occasional smoking has implications for research in population differences in smoking behavior. Latinos, for example, have a very high proportion of occasional smokers [5,16]. It is not well understood what prevents the large proportion of Latino young cigarette-experimenters from becoming regular daily smokers later. The genetic research on nicotine metabolism to date would have predicted Asians, not Latinos, to have the highest proportion of very light smokers [37]. The results from this study suggest that a better understanding of the “culture of smoking” including the cigarette-carrying habit among Latinos may be a useful lead in this inquiry.

The strong association also suggests that a change in one might lead to a change in the other. Historically, heavy smoking on the population level took place only after the invention of the cigarette-making machine [38-40]. The ready-made, pre-packaged cigarettes made it convenient for smokers to carry cigarettes around to be smoked in most places. Modern tobacco control policies, however, have increasingly restricted the settings where smoking is allowed, and this has led to a reduction in consumption among smokers living in areas where such policies are consistently applied [41-45]. It is possible that this change has also affected smokers’ cigarette-carrying habits. Some smokers carrying cigarettes on certain days when they realize that they cannot smoke anywhere on those days. This in turn could impact their cigarette consumption level. The present study is based on a cross-sectional survey and an observed correlation does not necessarily mean causality in either direction. Future research could examine individual smokers in a longitudinal design to clarify these issues.

We thank Shiushing Wong for statistical assistance and Sharon Cummins for helpful comments on an earlier draft of the paper. The 2008 California Tobacco Survey was funded by the California Department of Public Health, contract # 04- 35783. The analysis and writing of this paper was supported by a grant from the University of California Tobacco-Related Disease Research Program, Grant # 18XT-0163.