Copyright: © 2013 Zhao W, et al. This is an open-access article distributed under the terms of the Creative Commons Attribution License, which permits unrestricted use, distribution, and reproduction in any medium, provided the original author and source are credited.

From the end of March to the end of May, 2011, five cruises were carried out to survey the red tide occurrence in the Zhejiang coast of the East China Sea where the red tides occurred each spring and there was a trend for community succession from diatoms to dinoflagellates. Using Excitation Emission Matrix Spectrum(EEMs) combined with Parallel Factor Analysis (PARAFAC) examine the fluorescent components feature of dissolved organic matter (DOM) sampled from the East China Sea in the red tide season. Three fluorescent components were identified by PARAFAC, including tyrosine-like component C1(230,280/320), tryptophan-like component C2(240,305/355) and humic-like component C3(270,340/480). The result showed that the fluorescence intensity of C1 was relatively high and changed along with the succession of red tides, besides, the weak correlation coefficient with salinity and the particularity of its source suggested that phytoplankton activity was the important factor in fluorescence intensity change of C1. The fluorescence intensities of component C2 and C3 were relatively low and changed not very significant, but its good linearity with salinity indicated that the terrestrial input was the important sources of two components during the algae dispersion. Lower Fluorescence Index (FI) (<1.4) also tested the terrestrial distribution.
Nevertheless, correlation coefficient with salinity was slightly decreasing showed the effects of biological activity had increased during the outbreak of dinoflagellate. Higher (>0.8) Biological Index (BIX) and lower Humification Index (HIX) (<2) inferred that biological activity intensively in the red tide season in the East China Sea would contribute the CDOM in the water.

Chromophoric dissolved organic Matter < CDOM > is an important part of the dissolved organic matter (DOM) and plays an important role in marine photoreactions [1-6] and the biogeochemistry of biogenic elements [7]. Spectroscopic techniques can provide information about the source and composition of the DOM present in a natural abundance, thereby eliminating the need for isolating or concentrating it prior to analysis [8,9]. There are notable differences in CDOM composition in different water environments. The highest humic-like CDOM concentrations in estuarine and coastal areas are usually observed in freshwater and estuaries due to river runoff [10], and decreases in coastal and offshore waters [11]. Amount of proteinlike CDOM were monitored in the algae bloom water and changed with the bloom process [12,13].

The East China Sea is the red tide-frequent-occurrence area and its eutrophication water area is the first of the four China Sea area, which threatens fisheries, public health and economic. According to statistics, since the 1990s, the number of the red tides in this region accounted for over 50% of the total in China, and the frequency increased. Meanwhile, red tides in East China Sea also presented the characteristic of the duration lengthening and area expanding. Its occurring time is concentrated in the April and May annually [14-16].

The investigation area located at 28-30.5°N and 122-123.5°E in the East China Sea. This water area is greatly influenced by the Changjiang dilute water (CDW), the East China Sea Coastal Current (ECSCC), the Taiwan Warm Current (TWC) from Taiwan Strait, and a branch of the Kuroshio Current [17]. The Yangtze River (or Changjiang River) is the fifth largest river in the world with huge amounts of freshwater discharge (9.24×1011 yr-1). The fresh water discharge has significant seasonal variation with a minimum in May to October and a maximum in November to April. The CDW is divided into two branches out of the estuary; one extends southward along the coast of Zhejiang province and another northeastward directing at the Cheju Island [18,19]. The relative strength of these two branches varies seasonally. The southward branch was stronger in autumn and winter, and the northward branch was stronger in spring and summer.

Samples were collected in 5 cruises from sampling stations and sample times are shown in Figure 1. Diatom bloom occurred during March 31 to April 2, then diatom began to dispersion and 8 um size unknown algae appeared in part of the survey area in April 9 to April 10. Afterwards, most of the diatom dispersion and about 8um size unknown algae dominated in April 19 to April 20. Soon, dino flagellate began to bloom in May 13 to May 15 and out broke in May 25 to May 27. Surface, middle water samples which chlorophyll a was maximal, and bottom water samples (30-60m) were collected. The water samples were filtered using a vacuum pump through GF/F filters (Whatman, U.K, φ=25 mm, pre-combusted at 450°C for 4 h). The filtrate was stored in 60 ml brown glass bottle (pre-combusted at 450°C for 4 h) frozen at -20°C in the dark for later organic matter analysis. The EEMs fluorescence of the DOM was measured using a Hitachi F-4500 fluorescence spectrophotometer, with normal operating conditions of 5 nm slit widths of excitation and 10 nm slit widths of emission, a PMT voltage of 700 V. Fluorescence measurements were made by scanning emission spectra from 250 to 650 nm with 5 nm intervals, excitation ?wavelengths from 200 to 500 nm with 5 nm.The EEMs were normalized to quinine sulfate units using 0.01 mgL-1 quinine sulfate monohydrate in a solution of 0.05 mol L-1 H2SO4. The EEMs of each sample was Raman calibrated and subtracted from a Raman normalized Mill-Q water EEMs. Set the data which influenced by Rayleigh scattering to zero. EEMs were converted to R.U. by correcting with the area under the water Raman Peak at 350 nm excitation [20]. DOC was measured using a Shimadzu TOC-V total organic carbon analyser. Salinity was determined by CTD.

A total of 552 EEMs were subject to the multivariate modeling technique PARAFAC [21] using MAT-LAB 2010a with “the N-way toolbox for MATLAB’. The number of components was validated by split-half analysis.

The degree of DOM humification is an indicator of a material’s age and recalcitrance within a natural system [22,23]. The humification index (HIX) determined from the ratio of two integrated regions of an emission scan (sum from λEm 435–480 nm divided by the sum from λEm 300–345 nm) collected with excitation at 255 nm as a method for comparing the relative humification of DOM samples [22]. Fluorescence intensity ratios can be used to infer the relative contributions from autochthonous and allochthonous OM in natural waters. Fluorescence index (FI) was the ratio of the fluorescence intensity at emission 450 and 500 nm at afixedexcitation wavelength of 370 nm [24]. The biological/autochthonous index or BIX was used to assess the relative contribution of autochthonous DOM and is calculated from the ratio of emission intensities at λEm 380 nm and λEm 430 nm wavelength using a fixed excitation (λEx310 nm) [24].

The fluorescence characteristic of DOM Figure 2: Fluorescent components of DOM identified by the PARAFAC model.

Table 1: Positions of the fluorescence maxima of the three components.

The EEMs spectral characteristics of C1 was composed of two peaks with 320 nm emission maxima wavelength at excitation maxima wavelength 230 nm and 280 nm which was similar to a tyrosine-like fluorescent compound previously observed [1,25,26]. The spectral features were also similar to the high fluorescence intensities tyrosinelike fluorescent component observed in red tide water in the East China Sea [12].

The vertical distribution of the three components fluorescence intensities

The horizontal distribution of PARAFAC components To analysis the influence of terrestrial input on DOM in different red tide period, Table 4 showed the relationships between the three components and salinity. Although tyrosine-like C1 component had significant correlation with salinity, the correlation coefficient can reach -0.6749 in April 9 and April 10. Combining with the process of algal bloom showed that the C1 component was affected by algal succession in other periods. Tryptophan-like C2 component and humic-like C3 component had different correlation with salinity in different periods of red tide. C2 and C3 had better correlation with salinity during the diatom erupted until it dispersed, which showed that terrestrial input was a major contributor to them. The result was consisting with the conclusion that terrestrial input contributed a lot of tryptophan-like matter to the East China Sea. However, correlation had been reduced during the outbreak of dinoflagellate bloom, which indicated that the biological effects bad been increased.

Table 4: Positions of the fluorescence maxima of the three components.

Table 5: Relationship between fluorescence intensity of three components and DOC.

FI values can infer the relative contributions from autochthonous and allochthonous organic matter in natural waters. It suggested that FI values of 1.4 or less indicated humic DOM of terrestrial origin and values of 1.9 or higher correspond to microbially-derived material [24]. In this study, the FI in the East China Sea is in the range of 0.40~2.11, average 1.08. Most of the samples are less than 1.4, only one of them is larger than 1.9, indicating that terrestrial origin is the mainly sources of DOM in this area, which is consistent with above the relationship between DOM fluorescence components and salinity.

BIX Values between 0.8 and 1.0 correspond to freshly produced DOM of biological or microbial origin, whereas values below 0.6 are considered to contain little autochthonous OM [24]. In this area, BIX values were in the range from 0.39~1.48, average 0.9, about 81% samples were larger than 0.8, only 7 samples were less than 0.6. Red tide process is an important organic synthetic process; freshly produced DOM undoubtedly became an important distributor to the CDOM in the investigated water area.

The humification index (HIX) is used to investigate the degree of humification of CDOM [22,23]. Huguet et al. [33] measured HIX for samples from the Gironde Estuary (France). The high values between 10 and 16 were of terrestrial origin, but the low values (<4) were related to autochthonous organic matter. Yang et al. [34] got HIX values 0.53 and 2.11 sampled from the submarine hydrothermal vents off NE Taiwana indicating a biological or aquatic bacterial source. We calculated HIX values ranged from 0.45~7.53, averaged 1.37. Only several near shore or bottom samples have higher HX values (>2), especially near the Changjiang Estuary, the HIX value was 7.53. Most of samples had relatively lower HIX values (<2), indicating the DOM had the low humification degree and was the freshly produced by biological activity. 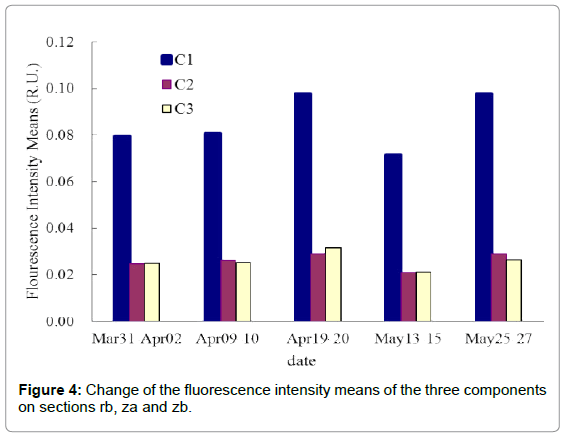 Figure 4: Change of the fluorescence intensity means of the three components on sections rb, za and zb.

Relationship between fluorescence intensity of three components and DOC

Many scholars attempted to establish the correlation between fluorescence and dissolved organic carbon (DOC) and tried to use fluorescence to invert the content of DOM [38]. Ferrari [39] found that humic-like was positively correlated with DOC (R>0.5) in the Mediterranean and the Atlantic coast, and Ji et al. [38] discovered that protein-like substance had good linear relation with DOC and humic-like substance had bad liner relation with DOC during red tide occurrence in Jiaozhou bay, Qingdao in China. In this study only part of the five curises showed somecorrelations between the three components and DOC listed in Table 4, which suggested the source complexity of the CDOM in the investigated water area.

Dissolved fluorescent organic matter was measured using EEMs combined with PARAFAC. The fluorescence intensity of tyrosine-like C1 was relatively high and changed along with the succession of red tides. Phytoplankton activity was the important factor effecting on the fluorescence intensity change of tyrosine-like C1 components. The fluorescence intensities of component C2 and C3 were low relatively and changed not very noticeable. All of the relationships between the three fluorescence components and salinity, low FI, higher BIX and low HIX indicated that terrestrial input and biological activity were the major sources of the CDOM components in different red tide periods. Our studies showed that the application of EEMs-PARAFAC modeling can characterize the qualities and sources of the dissolved organic matter in the coastal red tide-frequent-occurrence area.