Copyright: © 2013 Bazin I, et al. This is an open-access article distributed under the terms of the Creative Commons Attribution License, which permits unrestricted use, distribution, and reproduction in any medium, provided the original author and and source are credited.

The toxicity (mutagenic and carcinogenic effects) of food dyes (used like food additive) has been well documented. However the endocrine disrupting effects of these dyes have been poorly investigated. We studied five commercial food dyes for their agonistic estrogen activity and do a comparison with estrogenic activity of some paraben (other food additives compounds). Total estrogenic activities were measured using the Yeast Estrogen Screen bioassay (YES). The estrogenic potency of the food dyes was measured by dose-response curves and compared to a doseresponse curve of 17-β-estradiol (E2), (reference compound). Estrogen EC50 values have been calculated using standard linear regression methods. Among these compounds, three food dyes, indigotine (E 132), the monoazo dye Ponceau 4R (E 124) and the inorganic dye titanium dioxide (E 171), revealed weak estrogenic activity. Negative results were obtained for Quinoline Yellow (E 104).

Food additives are artificial ingredients added to foods, medications and cosmetics in order to enhance flavour, colour, and texture. They facilitate the preparation and prevent spoiling. The most common food additives are: Aspartame Monosodium Glutamate (MSG), Sodium Nitrate, parabens and dyes like tartrazine (Yellow Dye #5). Although many of these individual additives are included in small amounts individual average consumption is estimated at about 5 pounds of synthetic additives in total each year. If we include sugar data - as it’s the most used additive by the food industry - then that number increases to 135 pounds a year. Between them we can find food dyes (like tartrazine the most widely used) and parabens (methylparaben, ethylparaben, propylparaben, butylparaben and isobutylparaben). The most common health issue that occurs from the intake of food additives is the worsening of asthmatic symptoms and development of allergies. But safety of some of them is well known. For example, the safety of parabens has been debated overlooked to male and female breast, testicular cancer and fertility, they are able to mimic estrogens [1-5]. Except quinolone, food colors are relatively weak mutagen and certified as safe additives despite reports that some people have allergic reactions towards them [6]. However, studies have revealed toxic effects of many colorants [7].

All these compounds are classified as xenoestrogens. Xenoestrogens are exogenous chemicals able to modulate endogenous estrogen activity through, for example, structural similarities leads to receptors interactions or estrogen metabolizing enzymes. A common mode of action is with xenoestrogens shows an affinity for Estrogen Receptors (ER) and subsequently causes endocrine disruption through this interaction [8]. Other chemicals may bind to other receptors related to ERs and modulate their functioning [9].

The Estrogen Receptor (ER) is the key factor that elicits estrogenic response in vertebrates. Several structural trends have been identified to be potential ligands for the ER. Various additives like parabens have been proven to be endocrine disruptor compounds using either in vivo or in vitro assay [10]. Recombinant Yeast Assays (RYA) (or Yeast Estrogen Screen) based on use of estrogen receptors of vertebrates are convenient functional assays to evaluate the potential endocrine disruption of a substance [11]. But few studies have focused on the estrogenic activity of food dyes. Studies concern mainly food colors such as tartazine (E 102), sudan I and erythrosine B (E 127) which have effects on the chromosomal structure and can increase Estrogen Receptor (ER) site-specific DNA binding effect to Estrogen Response Element (ERE) in HTB 133 cells [12,13] and in the E-screen test [14]. Axon et al. [15] helped to identify several modulator of the human ER among food additives such as tartazine and sunset yellow.

In the current work, we sought to detect the presence of xenobiotic ER agonists between various food additives using the Yeast Estrogen Screen (YES).

Selected compounds methylparaben (MP), ethylparaben (EP), n-propylparaben (PP), n-butylparaben (BP), and 17-β-estradiol (E2) were purchased from Sigma-Aldrich (Table 1). All stock solutions were prepared in methanol and serially diluted in distilled water to obtain the targeted concentrations. For each paraben the endocrine activity was assessed at various concentrations in the range of 10-9 to 10-3 M. The methanol concentration in the exposure solutions, including controls was 0.01% (v/v) in the tested solutions, which is a non-effective dose as estimated in preliminary tests.

Table 1: compounds analyzed in this study.

For each dye, a stock solution (0.1 M) was prepared by dissolving in distilled water, followed by filtration through Whatmann No. 5 filter paper. All these dyes appeared perfectly soluble in water at this concentration as assessed by the absence of precipitate. For each dye, the endocrine activity was assessed at four concentrations in the range of 1×10-6 M to 1×10-2 M. The natural fluorescence of the dyes and their interference on the fluorescence emitted by yeast was determined beforehand in order to avoid spurious signals generated by the YES test in our experimental conditions. The fluorescence of each dye has been measured in the absence of yeast cells and subtracted from the data obtained for estrogenic tests. The cytotoxicity of each dye was evaluated by measuring yeast growth at an O.D. of 600 nm.

To determine the estrogen agonistic activity of studied compounds, E2 was used as a positive control and distillated water was used as a negative control. Stock solutions of MP, EP, PP BP (10-2 M), 17 β -estradiol (10-3 M), and dyes (0.1 M) are prepared in methanol and serially diluted in distilled water. The transformed yeast strain were grown overnight at 30°C in a non-selective medium (YPD: 5 g/L yeast extract, 10 g/L peptone, 20 g/L glucose, all from Sigma-Aldrich, France). The following day, 15 μl of saturated culture is added to 15 ml of selective media (SD, 6.7 g/L yeast nitrogen base without amino acids, DIFCO, Basel, Switzerland; 20 g/L glucose, supplemented with 0.1 g/L of prototrofic markers as required). The final culture was diluted in selective media and adjusted to an optical density (DO) between 0.1-0.2 at 600 nm. 45 μl aliquots were transferred into a 96-well polypropylene microtiter plate. 5 μl aliquots of each sample were then dispensed into wells in quadruplicate. This experimentation was carried out 3 times in order to obtain representative statistical data. After 6h incubation, 50 μl of YPER (Pierce, Rockford, IL, USA) were added to each well and incubated at 30°C for 30 min. 50 μl of buffer Z ( 60 mM Na2HPO4, 40 mM NaH2PO4, 10 mM KCl, 1 mM MgSO4, pH 7.0 plus 0.5% 2-mercaptoethanol (Fluka), 1% Triton X-100 (Sigma), 4-methylubelliferyl β-D Galactoside (Sigma)) were added to the cell lysat then incubated at room temperature for 30 min after a centrifugation at 1000 rpm for 1 min. The fluorescence was mesured at 460 nm (excitation at 355 nm and emission at 460 nm). Confirmation of human ER activation by xenobiotics was made with 4 Hydroxytamoxifen (4-OH-TAM). 0.5 μM of 4-OH-TAM was added to yeast cell prior to addition of potential ER activator. 4 OH-TAM competitively binds to estrogen receptors on tumor cells and other tissue targets, producing a nuclear complex that decreases DNA synthesis and inhibits estrogen effects. After 6h exposure to binary mixture, β-D-galactosidase activity was determined.

Natural and artificial azo dyes and parabens are widely used as coloring agents for food ingredients, drugs and cosmetics. These toxicological effects can vary from carcinogenicity and mutagenicity to genotoxicity. Many azo dyes are genotoxic in short-term tests and carcinogenic in laboratory animals [7]. The genotoxicity of these dyes are controversial, it were classified as genotoxic in one review [7] but not in another [16].

To our knowledge, food additives such as ponceau 4R, azorubine, titanium dioxyde or indigotine have not been examined and/or reported to be estrogenic chemicals. Accordingly, we investigated their potency of action in the yeast/(ERE) 2-pLacZ reporter gene assay. Figure 1 illustrates a typical dose-response for E2 on relative reporter gene expression in yeast cells transfected with (ERE) 2-pLacZ. In our experimental conditions the EC50 is 3.77*10-10 M (22 ng/L). These data were used to calculate EC50% values for a range of compounds. Table 2 and Figure 2 demonstrate that some formulation compounds of cosmetics such as paraben esters, are human ER agonists [17], in our assay. A correlation between the length of the paraben ester chain and the estrogenicity has been also pointed out [17,18]. In addition the cosmetic and food additives titanium dioxide and indigotine were also shown to be ER_ agonists (Figure 2). They induce a concentrationdependent response in yeast cell. As shown in Figure 2, the estrogenic potency of food dyes is very weak compared to that of E2 or some parabens. As previously reported [15], the food dye quinolone yellow was not shown to be an ER agonist (Figure 2). Table 2 demonstrates that food colorings such as indigotine, ponceau Red 4 and titanium dioxide - the most potent food xenoestrogens examined in this study - were approximately 106 times less effective that E2 at activating the human ER in the Yeast cell. The most xenoestrogen between paraben used like food additive is butylparaben. In 2003, butylparaben was cleared by the Joint FAO/WHO Expert Committee on Food Additives (JECFA) for use as a flavoring agent “at very low levels” (not specified) [19]. Butylparaben is used as a food additive in Japan and as an additive to beer to retard microbial growth. Recently, a call for data regarding suggested limits for the use of butylparaben as a food additive [20].

Table 2: EC50 of 17-β-Estradiol and food additives compounds in distilled water samples obtained in YES test.
(EC50 values, defined as the concentration where transcriptional response reaches 50% of its value at saturating concentration of ligand, were calculated from doseresponse assays, using 8 concentrations for parabens and food dyes and 10 concentrations for 17β-estradiol). 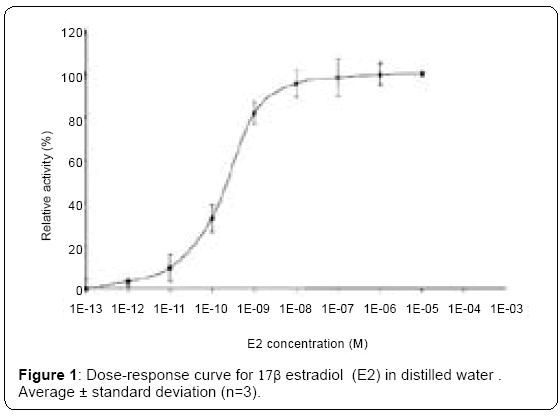 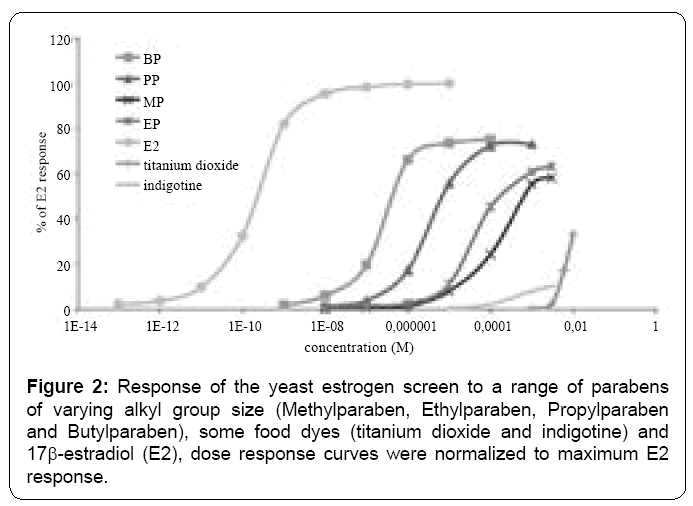 We have analyzed if 4 OH-TAM (a classical ER antagonist) can inhibit the estrogenic activity induced by studied compounds. Inhibition of the induction of (ERE) 2-pLacZ reporter can confirm that studied compounds induce an estrogenic effect in yeast cells. Figure 3 demonstrates that (ERE) 2-pLacZ reporter gene induced activity using E2 as well as with benzylparaben, butylparaben, propylparaben ethylparaben, indigotine and titanium dioxide, were inhibited by 4 OHTAM. 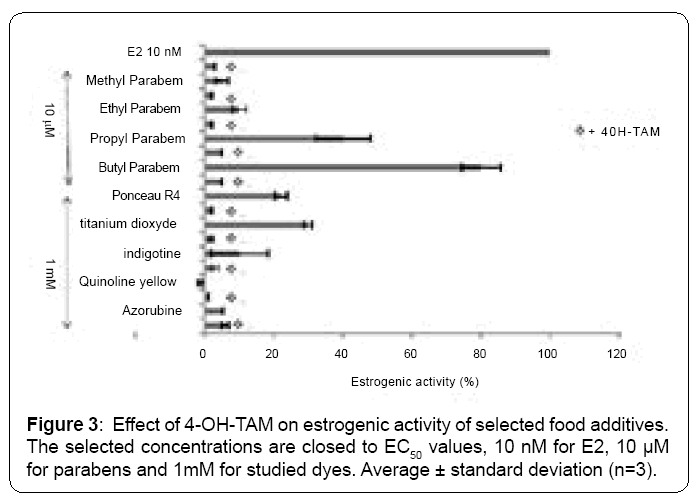 Our assays consist on an engineered yeast strain that harbors two foreign genetic elements: a vertebrate receptor, human Estrogen Receptor (hER), in our case and a reporter gene. Expression of reporter gene, LacZ, is dependent on the occurrence of estrogens. The final product concentration is easy to quantify, the beta-galactosidase activity. The mechanism of YES is shown in the Figure 4. This is a simplified version of the mechanisms used by natural estrogens to operate in vertebrates. The fundamental similarity of the transcriptional machinery in all eukaryotes ensures that it is similar also on yeast. In a strict sense, the YES assay detects only agonists of the ER, which are, substances that bind to ER and elicit transcriptional response in this simplified system. In conclusion some food dyes like titanium dioxide and indigotine have weak estrogenic effect in yeast cell. Their activities are close to those of methylparaben. 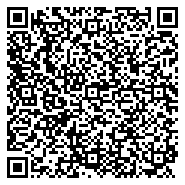