Copyright: © 2012 Lee JM, et al. This is an open-access article distributed under the terms of the Creative Commons Attribution License, which permits unrestricted use, distribution, and reproduction in any medium, provided the original author and source are credited.

It has been very easy to obtain the primary information on nucleotide or amino acid sequences in model organisms in the postgenomic era. The next molecular target of research is to analyze and understand the structure and function of proteins of interest. Although an increasing amount of data on crystal structure, catalytic activity, and the functions of proteins have been generated, the roles of many proteins remain unclear. In general, it is necessary to purify the target protein with biological or biochemical activity for proteomic analysis. Many recombinant protein expression systems using different host organisms, such as Escherichia coli, Saccharomyces cerevisiae, Pichia pastoris, cultured mammalian cells and insect cells are widely used. However, many researchers still have problems obtaining a sufficient quality and quantity of target proteins. Two major reasons for this are the toxicity and insolubility of target proteins. Proteins with physiological activity often shows severe toxicity to host cells. When this occurs, host cells with protein expression constructs cannot survive.

The baculovirus expression vector system (BEVS) has proven particularly useful for producing recombinant proteins. Its many advantages include the limitless size of the expressed protein, eukaryotic post-translational modifications, proteolytical processing, and high level expression compared to those in other eukaryotic systems [1]. Moreover, the proteins expressed by this system are correctly folded and are usually biologically active.

There are two types of baculoviruses which are available as expression vectors, Autographa californica nucleopolyhedrovirus (AcNPV) and Bombyx mori nucleopolyhedrovirus (BmNPV) [2,3]. AcNPV can infect a series of cell lines, such as Sf9, Sf21, or High Five, thus making it suitable for cell culture expression. AcNPV is not infectious to silkworm or silkworm-derived cell lines. On the other hand, BmNPV is believed to be infectious only to B. mori or its derived cells. However, the hybrid baculovirus, AcNPV replacing its putative DNA helicase-encoding gene with that of BmNPV, can replicate in both BmN (not susceptible to AcNPV) and Sf21 cells [4]. Furthermore, Guo et al. [5] found 14 strains of the silkworm B. mori that were susceptible to AcNPV and investigated one of them for its genetic basis of infectivity to this virus [5]. We also isolated more than 10 silkworm strains permissive to AcNPV by the screening of 163 strains stocked at Kyushu University [6].

For recombinant protein expression using BmNPV, silkworm larvae or pupae are always used as a host for infection because of the advantages the silkworm offers. The system might be one of the most promising for the large-scale production of eukaryotic proteins. The first report using the silkworm as a host insect for the production of human α-interferon was published in 1985 [7]. Afterwards, hepatitis B virus surface antigen, human growth hormone, human GM-CSF, bovine IFN-γ, human aFGF and bFGF were successfully produced. In these studies, several hundred μg of proteins were purified from 1 ml of hemolymph or one silkworm larva [8-12]. A recent example of recombinant protein production using silkworm larvae or pupae was well summarized in a review [13]. Using the hybrid baculovirus, 45 proteins from six categories were expressed and their expression levels were compared between silkworm larvae, pupae and Sf9 cells [14,15]. In general, the amount of proteins produced by one silkworm larva or pupa was greater than Sf9 (1 × 106 cells), although the silkworm system had a tendency to make the expressed proteins insoluble. In Table 1, we provide an up-to date summary of recombinant proteins expression in silkworm larvae.

Table 1: Expression of recombinant proteins in silkworm larvae and pupae.

The heterologous combination of AcNPV with silkworm generally produces less recombinant protein than the BmNPV-silkworm expression system. However, when the BmNPV-silkworm system was employed, the amount of recombinant proteins expressed and accumulated in insoluble form was often too high. As mentioned above, we found AcNPV permissive silkworm strains and using one of these strains, the d17 strain, a comparative amount of proteins were expressed from recombinant AcNPV (Figure 1, Lee et al.) [16-18]. The d17 strain is described in detail below. Furthermore, the solubility of the target proteins produced by using AcNPV, such as Oct4 and 3C3d, were slightly increased compared to that produced by using BmNPV. Therefore, in some cases, silkworm could be used as a host for both the BmNPV and AcNPV systems [19,20]. 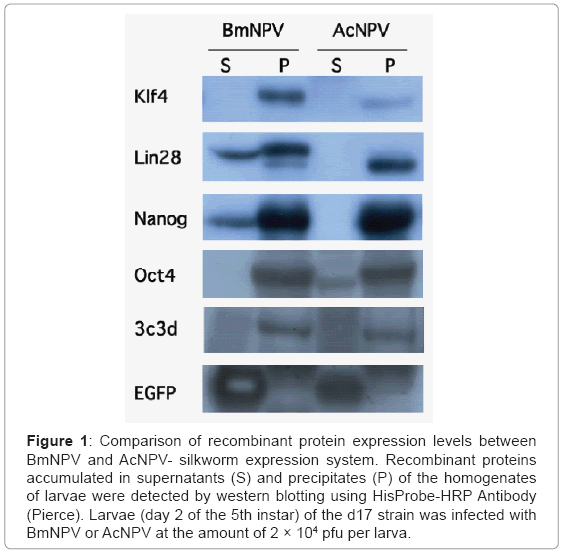 Figure 1: Comparison of recombinant protein expression levels between BmNPV and AcNPV- silkworm expression system. Recombinant proteins accumulated in supernatants (S) and precipitates (P) of the homogenates of larvae were detected by western blotting using HisProbe-HRP Antibody (Pierce). Larvae (day 2 of the 5th instar) of the d17 strain was infected with BmNPV or AcNPV at the amount of 2 × 104 pfu per larva.

Silkworm as a host strain

During the long history of sericulture in Japan, a wide variety of races and strains of silkworm have been generated and maintained. Kyushu University acts as a repository of silkworm bioresources and currently stores approximately 820 mutant strains [21]. For use as an insect factory, the silkworm B. mori has remarkable advantages in the mass production of eukaryotic proteins over other systems; the easy and low cost of mass rearing and the extraordinarily large body size and growth rate. This silkworm increases its body weight 104-fold within 25 days, from 0.5 mg at hatching to 5 g at the 5th in star, by eating only 20–25 g of mulberry leaves [2].

While the silkworm is the native host insect of BmNPV, the commercially available strains, such as Shunrei x Shogetsu and Kinsyu x Showa, are moderately resistant to BmNPV, probably due to their long history of being bred for economic traits.

In order to find out which B. mori strains are suitable for the BmNPV expression system, 12 AcNPV-susceptible strains were selected and the target protein expression was measured under the control of a strong polyhedrin promoter of BmNPV. As a result, we identified a B. mori strain (d17) which was highly effective to foreign protein expression by BmNPV [22]. The d17 strain exhibited up to about a 10 times higher production of recombinant luciferase than the other silkworm strains tested. Compared to the p50 type strain, drastically increased expression of recombinant EGFP and DsRed proteins from the polyhedrin promoter was seen in the larvae of the d17 strain (Figure 2). Interestingly, the d17 strain was also sensitive to AcNPV infection. However, with the other strains, there was no significant correlation between the sensitivity against two viruses. Figure 2: Expression of DsRed and EGFP in the high-permissive d17 strain and low-permissive p50 strain. Larvae (day 2 of the 5th instar) and pupae (day 2 of the pupae) were infected with BmNPV/polh-DsRed and BmNPV/ polh-EGFP at the amount of 2×104 pfu per larva and pupae. Photographs of the larvae and pupae were taken at 120 hpi. In each group of photographs, the top panels (A) exhibit bright light images and the bottom panels (B) show fluorescent images.

In addition to the d17 strain, we identified more than 10 silkworm strains suitable for the BmNPV expression system from the silkworm bioresources stored at Kyushu University Lee at al. [16]. Because these strains are genetically purified, there would be some difficulties in mass rearing them for industrial use. However, we expect that an F1 hybrid from these strains would have hybrid vigor or heterosis. In fact, the F1 hybrid or three ways cross of the BmNPV sensitive strains have produced an equivalent amount of recombinant proteins as their parental strains (Figure 3), and these hybrid lines are very easy to massrear and lay a relatively large number of fertile eggs. 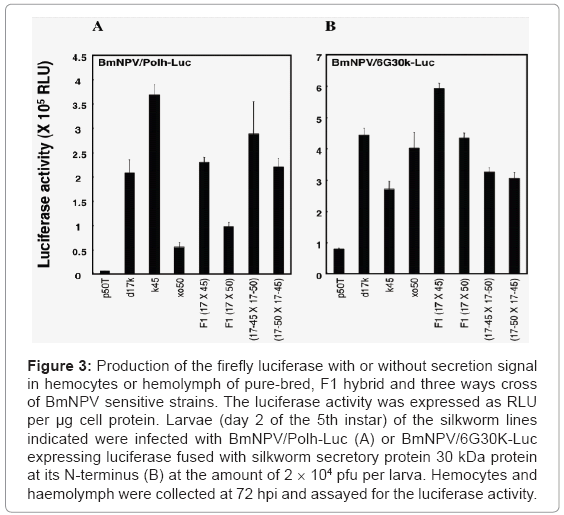 Figure 3: Production of the firefly luciferase with or without secretion signal in hemocytes or hemolymph of pure-bred, F1 hybrid and three ways cross of BmNPV sensitive strains. The luciferase activity was expressed as RLU per μg cell protein. Larvae (day 2 of the 5th instar) of the silkworm lines indicated were infected with BmNPV/Polh-Luc (A) or BmNPV/6G30K-Luc expressing luciferase fused with silkworm secretory protein 30 kDa protein at its N-terminus (B) at the amount of 2 × 104 pfu per larva. Hemocytes and haemolymph were collected at 72 hpi and assayed for the luciferase activity.

Transgenic silkworm technology can be used to modify the host strains for a baculovirus expression system. There are two different utilization methods for transgenic silkworm. One is to express the useful genes for recombinant protein production, such as molecular chaperones and protein modifying enzymes, irrespective of their origin.

Another is to repress or knockout harmful genes by RNA interference or gene targeting. Although the development of a gene targeting method in silkworm is under study, RNA interference is available in cultured silkworm cells by using several different approaches. Expression of long-hairpin RNA from plasmid DNA repressed the expression of a reporter gene by more than 99% in silkworm cell lines [29]. In addition, the expression of Caenorhabditis elegans SID-1 (CeSID-1) induced effective gene silencing in the cultured silkworm cell line BmN4 (BmN4-SID1) [30,31]. Soaking the BmN4-SID1 in dsRNA corresponding to endogenous target genes induced a significant decrease in the amount of mRNA or protein. It is not difficult to apply these strategies in transgenic silkworm.

To construct transgenic proteins useful for protein production, silkworm molecular chaperones, Hsp70 and Hsp40, or Hsc70 and Hsp90 co-chaperone Hop were introduced into silkworm genomes [32]. These transgenic silkworms were effective for the expression of mouse C3d, steroid hormone receptor and USP2 and exhibited a significant increase of target proteins in a soluble fraction. The molecular chaperones expression system used in this study is schematically illustrated in (Figure 4). In the transgenic silkworms, the chaperone genes were under the control of the UAS-hsp mini promoter and recombinant baculoviruses carrying the genes for the Gal4NFκBp65 activator and target proteins. The UAS promoter is activated only when the virus with the GAL4 activator was infected; therefore, useful but relatively toxic proteins can be maintained in transgenic silkworm genomes using this system. 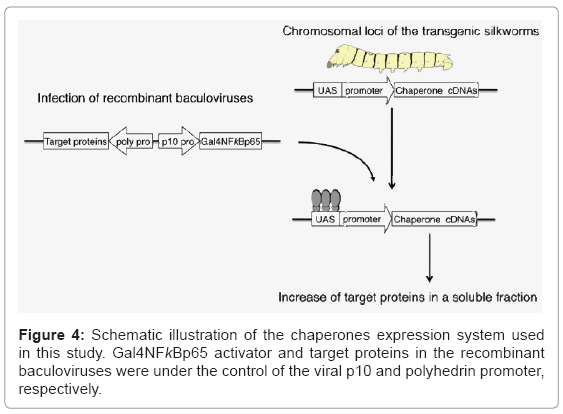 Figure 4: Schematic illustration of the chaperones expression system used in this study. Gal4NFkBp65 activator and target proteins in the recombinant baculoviruses were under the control of the viral p10 and polyhedrin promoter, respectively.

Another usage of transgenic silkworms is to convert the N-glycan attached to recombinant glycoproteins. The endogenous N-glycan structure found in insect glycoprotein is paucimannose or the high mannose-type, whereas that produced by mammalian cell is the complex-type that is terminally galactosylated or sialylated [33]. By expressing 5 mammalian glycosyltransferases, metabolically engineered Sf9 cells, SfSWT-1, were demonstrated to produce sialylate recombinant glycoproteins in the absence of fetal bovine serum [34]. Transgenic silkworms possessing mammalian glycosyltransferases could be generated in a similar manner, and could become a powerful tool for expressing recombinant proteins with mammalian-type N-glycan in the future.

As mentioned in this review, sensitivity against viruses differs among strains. To use the silkworm-baculovirus expression system, screening of adequate strains from silkworm bioresources is important. Although the silkworm has been an important agricultural animal in Japan, available information and academic use of silkworm bioresources was previously limited. To rectify this, the Ministry of Education, Culture, Sports, Science and Technology of Japan started a “National Bio Resource Project (NBRP)” in 2002 and selected silkworm as one of the bioresources in the project. Once this program began, researchers were able to obtain information on silkworm bioresources on the NBRP website, and access use of the strains. Information about the distribution of the bioresources is freely available on the homepage at http://www.nbrp.jp/index.jsp . Also, NBRP responds to direct inquiries at the following address: 6-10-1 Hakozaki, Higashi-Ku, Fukuoka, 812-8581, Yutaka Banno, NBRP “Silkworm”, Faculty of Agriculture, Graduate School of Kyushu University, Japan, Tel & Fax: 092-624-1011; Tel: 092-621-4991; E-mail: [email protected]