Copyright: © 2011 Yousefpour M, et al. This is an open-access article distributed under the terms of the Creative Commons Attribution License, which permits unrestricted use, distribution, and reproduction in any medium, provided the original author and source are credited.

An attempt is made to convert the calcium carbonate skeleton of widely available garden snail shell (Helix aspersa) to hydroxyapatite based bioceramics. The snail shell was found to decompose within 850°C to all the carbonate phases. The calcined snail shells were then treated with acids followed by different chemicals in ammoniacal media maintaining proper stoichemetry to produce fine Hydroxyapatite (HAP) as filter cake with Ca/P molar ratio of 1.67. The dried HAP powder was extremely pure with specific surface area of 15m2/g. The different characterization techniques were adopted both for calcined snail shell and HAP synthesized like X-ray Diffraction (XRD), Thermal Analysis (DTA/TGA) Figure 1, Fourier Transform Infrared Spectroscopy (FTIR) and Scanning Electron Microscopy (SEM). The surface area and the particle size, of the HAP powder prepared by chemical precipitation route, were also determined by BET and Malvern particle size analyzer respectively. The synthesized powder was soaked in stimulated body fluid (SBF) medium for various periods of time in order to evaluate its bioactivity. The changes of the pH of SBF medium were measured. High bioactivity of prepared HAP powder due to the formation of apatite on its surface was observed.

Hydroxyapatite (HA, Ca10 (PO4)6(OH)2), Zirconia (ZrO2) and Alumina (Al2O3) are known as important implant materials [1-3]. HA has often been considered as a candidate for use in load -bearing applications due to bonds and promotes the new bone formation necessary for implant osseointegration to bone directly. However, its poor mechanical properties have limited its application to load-bearing parts [4-11].

Alumina and zirconia have excellent biocompatibility. The main advantages of Al2O3 is its high hardness and wear resistance, while ZrO2 exhibits higher strength and fracture toughness and the composite consisting of the two has higher ductility and fracture toughness than each constituent [12]. Some interest has been paid to composites comprising of hydroxyapatite and another phase of high mechanical properties and bio-inertness, such as alumina and zirconia [13]. Cerium oxide or Ceria is used to stabiles the tetragonal polycrystalline structure of zirconia at room temperature, the product called Ceria-partially stabilized zirconia (Ce-TZP) [15]. Ce-TZP/Al2O3is a composite in which Ce-TZP particles are added to Al2O3 matrix as the second phase to modify the fracture behavior of composite because, it has high fracture toughness [14]. In additional, Ce-TZP/Al2O3 nano-composites could be superior to Y-TZP in clinical use [16,17]. The biocompatibility of zirconia-alumina (ZA) nano-composites in load-bearing applications such as dental/ orthopedic implants was significantly enhanced by the addition of bioactive HA [4].

For this study, we used of Al2O3, HA and ZrO2 nanopowders synthesized by sol-gel, chemical precipitation and hydrothermal methods (with particle sizes 112,9,12 nm respectively). The process Schematic is given in Figure 1. 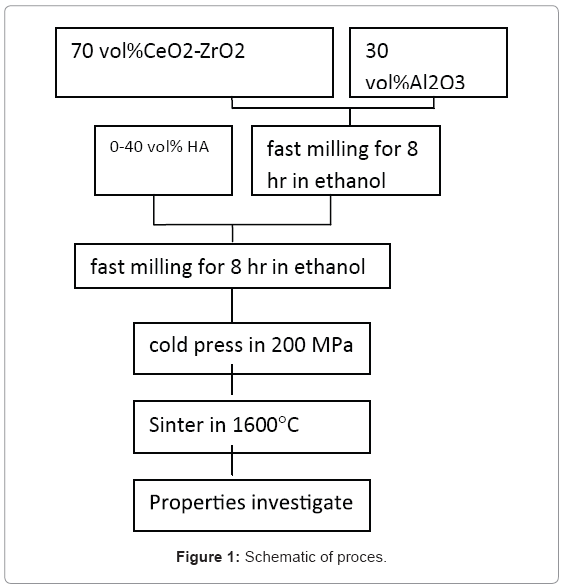 As is observed ZA nano -composite powders were prepared by fast milling machine (sharifi co. iran) of 70 vol% 10Ce-TZP and 30 vol% Al2O3 powder in ethanol for 8 hr. Obtained powder was mixed with HA (up to 40vol%) in ethanol by fast milling machine again for 8 hr. Mixed slurry was dehydrated, crushed and sieved, and uniaxial cold pressed at a pressure of 200 MPa by universal test machine (Zwick roll-Z100). Cold pressed samples were sintered at 1600°C for 2 hr by electrical furnace (Vecstar). The density of the specimens was measured by the Archimedes method [ASTM B311-08]. Crystalline phase analysis was performed by XRD (Bruker model D8). The bending strength was measured by means of three- point bend test with universal test machine (Zwick roll-Z100) [ASTM C1674-08].

In order to investigation the proliferation behavior on the ZA-HA composites, the samples used for cell tests were prepared from disc specimens with 10mm diameter that after polishing both sides with diamond slurries down to 1 mm, the specimens were washed and sterilized at 121°C for 20 minutes. The samples were placed in a 24 well tissue culture plate and seeded with 25µl of the 3x104 cells/cm2 MG63 (National Cell Bank of Iran-no NCBI C.) cell density suspension. Cells were allowed to adhere for 2 hours then flooded with 1 ml of Dulbecco's modified Eagle's medium (DMEM, Gibco-USA), 2mM L-glutamine (Gibco), 100 IU/ml of penicillin and 100µg/ml of streptomycin (Gibco) supplemented with 10% fetal bovine serum (FBS, Gibco-USA) and placed back into the incubator. The fabricated specimens, including pure HA as a positive control, were placed into a 24-well plate, which was followed by plating on all the discs.

The cells were cultured for 7 days in a humidified incubator under an atmosphere of 5% CO2 at 37°C. After detaching the cells from the specimens with a trypsin-EDTA solution (0.25% trypsin, 0.05% EDTAGibco) and staining with 0.4% trypan blue, the living cells were counted using a hemocytometer (Paul Marienfeld GmbH & Co-Germany). Each set of tests was performed in triplicate.

The results were expressed as means with standard errors. The data were then analyzed by one-way ANOVA, followed by the post hoc paired Student's two-tailed t-test. The significance levels were notified significant (*, if p< 0.05) and highly significant (**, if p<0.01) in the tables. 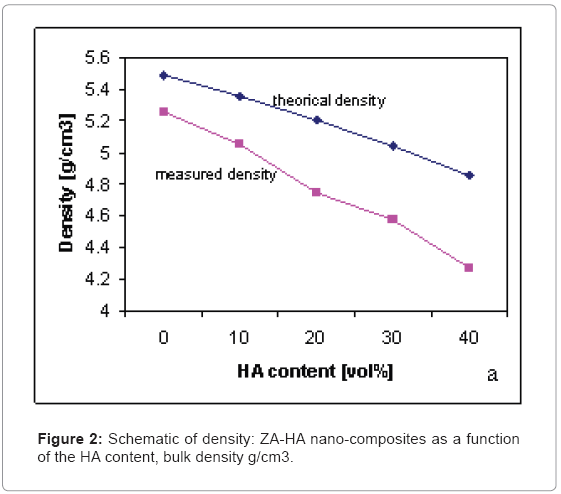 Figure 2: Schematic of density: ZA-HA nano-composites as a function of the HA content, bulk density g/cm3.

Figure 3, illustrates the XRD patterns of different composite materials. When no HA was added, only peaks corresponding to ZrO2 and Al2O3 are present, as shown in Figure (3-a). With addition of 10, 20, 30 and 40 vol% HA (Figure (3-b-c-d-e), respectively), as well as the peaks corresponding to HA, TCP peaks, were also detected, that TCP component was originated from the reaction between HA and ZrO2. The bending strengths of the nanocomposites are shown in Figure 4, as the HA content was increased up to 40vol% the strength decreased of 850 to 137 MPa. 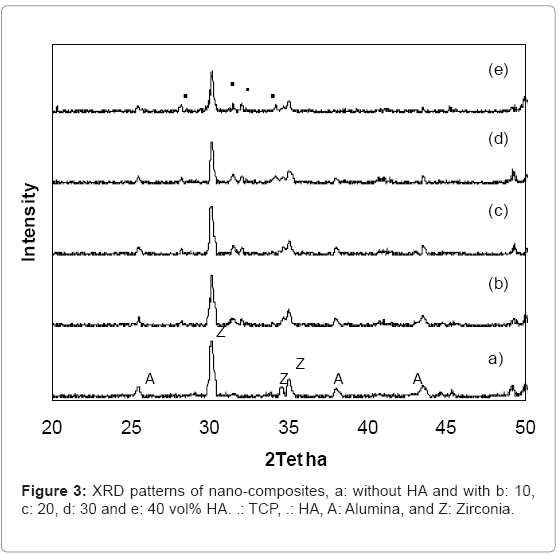 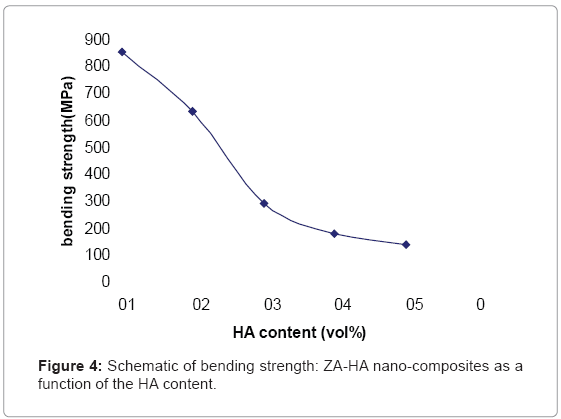 Figure 4: Schematic of bending strength: ZA-HA nano-composites as a function of the HA content.

Biocompatibility tests are in progress. Figure 5 illustrates Cell proliferation results on the specimens after 7 days culture. The number of cells was significantly increased by the addition of 10% HA to the ZA (ANOVA, p<0.05). The number of cells increased steadily with further addition of HA (ANOVA, p±0.001). When 40% HA was added to the ZA, the proliferation rate on that specimen became comparable to that on the pure HA means of wells±S.D. 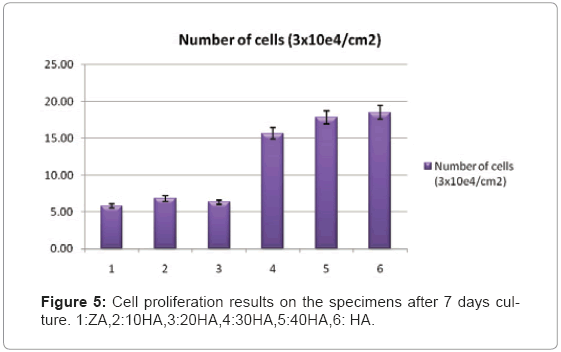 Figuer 6 show morphology of the proliferated cells on the specimens. As was observed specimens with30vol%HA show most of the cell proliferation. As a bio-inert implant material, ZA nano-composite is considered to have sufficient strength. However, its biocompatibility such as satisfactory osseointegration and faster bone regeneration has to be improved by the addition of calcium phosphates such as HA, and TCP, [1,4]. TCP component was originated from the reaction between HA and ZrO2. Both HA and TCP are formed of calcium and phosphate component, which are essential to satisfactory osseointegration and faster bone regeneration to be achieved [4,7]. Just as shown in the XRD patterns ,intensities of the HA and TCP peaks increased steadily with increasing HA content.

Hydroxyapatite (HA)-zirconia-alumina (ZA) bio-nano-composites were produced by mechanical blending of separately synthesized nano-scaled powder. Composite materials were characterized by phase analysis and cellular response test. From mechanical and biological properties evaluation of the 10Ce-TZP/Al2O3/HA bio nano composites, specimens with 30 vol% of HA, was found to be the optimal composition for biological applications.