Copyright: © 2012 Ahmed E, et al. This is an open-access article distributed under the terms of the Creative Commons Attribution License, which permits unrestricted use, distribution, and reproduction in any medium, provided the original author and source are credited.

Mycobacterium smegmatis mc2 155 contains a Ribonucleotide reductases (RNR), which catalyses the irreversible reduction of ribonucleotides to the corresponding 2 ́deoxyribonucleotides required for DNA replication and cell proliferation.

The aim of this work was the development of a rapid assay for ribonucleotide reduction by Mycobacterium smegmatis mc 2 155 and their biochemical characterisation.

For the enrichment of the Ribonucleotide reductase, different purification procedure has been achieved by using fast protein liquid chromatography (FPLC) with superdex G-200 chromatography and Phenyl-Superose HR 5/5 and the enzyme activity was assayed by using (HPLC).

Ribonucleotide reductase activity was detectable in the 40-60% ammonium sulphate fraction. A further purification procedure by gel filtration on the superdex G-200 led to a dissociation of the both subunits. Therefore, a biochemical complementation assay was necessary to identify ribonucleotide reductase activity. The obtained specific activity of the purified protein was 1790 pmol per mg per min with an overall yield of 10%. The purified small subunit of MS2- protein was detected on SDS-PAGE, which was showed a strong band that corresponds to an apparent molecular weight of 38.5 KDa.

Finally, the permeabilisation of the cells of M. smegmatis mc 2 155 with ether and toluene for short time facilitated us to develop a rapid assay for ribonucleotide reductase activity of others gram positive bacteria.

Clearly, new approaches to the development of anti-tuberculosis therapy are necessary. Inactivation of ribonucleotide reductase (RNR); the cell cycle-regulated, allosteric enzyme that catalyses the reduction of nucleoside diphosphates (NDPs) to the corresponding 2´-deoxy nucleoside diphosphates (dNDPs) [6]; may be attractive target for new anti-tuberculosis agents. The enzymatic activity is the first step in DNA synthesis and has therefore been recognized as primary target in the design of cancer chemotherapeutic agents. Furthermore, RNR is gaining wide acceptance as a target for antiviral agents and properly as anti-parasites chemotherapy [7]. There are very important for identification of Mycobacterium tuberculosis RNR as potential drug target: the inhibition of RNR altered the growth patterns of these bacteria. Studies in the 1960s and 1970s showed that Mycobacterium smegmatis cultured in iron-depleted media displayed altered, elongated morphology with decreased DNA synthesis and increased activity of DNA repair enzymes [8]. When grown in the presence of the radical scavenger hudroxyurea Mycobacterium smegmatis contained a decreased DNA/protein ratio, with an increase in DNA polymerase and ATP-dependent DNAase activities, measured in crude extracts [9]. The authors speculated that their results were consistent with the inhibition of mycobacterial activity of RNR. As part of an investigation of the regulation of mycobacterial growth and DNA synthesis by RNR, we report in this work the development of new assay for ribonucleotide reduction, the correlation between ribonucleotide reduction and growth and the purification of this enzyme by chromatography methods.

Large scale-incubation of the strains Mycobacterium smegmatis mc2155 was carried out according the method of Griepenburg and coworkers [12], which was grown in modified seed media described above at 37°C in 10 L fermentor with a aeration of 4 L/min and an agitation 250 rpm using fermentor Drive Assembley (New Brunswick Scientific Co. Inc. NJ., USA). Because Ribonucleotide reductase (as cell-cycle controlled enzyme) is present only in proliferating cells and previous investigations had showed highest activity at the late logarithmic phase of the growth curve [13]. Mycobacterium smegmatis mc2 155 was grown for 10 hours and harvested at an optical density at 578 nm 16-20.

Preparation of nucleotide of permeable cells

The fresh cells has been harvested in the late-exponential growth phase that displayed higher Mn-RNR activity were washed with 85 mM Potassium phosphate buffer and osmotically adjusted with 0.6 M sorbitol. The pH of this buffer was adjusted 7.2 for the cells grown in seed medium. The cells were collected by low speed centrifugation and adjusted to defined cell number, gently dispersed (30s x 6) in ultrasonic bath (Sonorex RK 102 H, Bandelin). The cells were permeabilized in teflon FEP tubes (Nalge, Rochester, N. Y., USA) by treatment with organic solvent (1% toluene, 10 min, 3 × 109 CFU/ml or 501% (v/v) ether, 1 min, 1 × 109 CFU/ml]. The permeabilized cells were washed twice with the same buffer as above omitting sorbitol in the last washing prior to assay of robonucleotide reductase activity. The suspension of the permeabilized cells were either immediately assayed or divided into small aliquots and quickly frozen liquid nitrogen for storage at temperature (-80°C). Such frozen cells were thawed only once.

The optimum condition of pH, ionic strength, temperature and time utilized for a assaying the RNR activity of Corynebacterium ammoniagenes [15] was used to display the RNR activity of Mycobacterium smegmatis mc2155. Assay mixtures contained, in a total volume of 100 μl 85 mM potassium phosphate buffer, pH 6.6, 0.5 μCi [5-3H] CDP (spec. act 10-20 Ci/ mmol), free from ethanol in vacuum; 10 nmol CDP (50 μM), 10 nmol ATP (50μM) as positive effector; 1.2 μmol dithiothreitol (6 mM); 0.2 μmol MgCl2 (1 mM); and up to 1.5 mg enzyme protein. The mixture was incubated for 20 min at 30°C and the reaction was stopped by boiling for 3 min. Assays with crude protein or with fractioned protein were treated with 50 μg pronase (from Streptomyces griseus, Boehringer) for 90 min at 37°C to destroy heatstable nucleoside N-glycosylase, followed by briefly boiling to destroy the pronase. The nucleotides in the assay solution were converted to the corresponding nucleosides by the addition of 10 units of alkaline phosphatase (from calf intestine, Boehringer) in 10 μl 1 M Tris/HCL buffer, pH 9.9, and incubated at 37°C for 90 min. The sample was boiled for 3 min and centrifuged. The supernatant was decanted and used for automatically nucleoside analysis. The system consists of an automatic sample injector (ASI 120 from Ismatec :sample capacity, 120) which injects 20 μl aliquots onto 25 × 0.4-cm cation-exchange HPLC column (Aminex A-9, Biod Rad) operated in a isocratic liquid chromatography system (model 330 from Beckman). The column is thermostated at 37°C and eluted with 0.1 M borate buffer, pH 8.2. The ribonucleoside, deoxyribonucleoside and free base present in the assay are separated with a flow rate of 0.8 ml/min and are fractioned directly into scintillation vials. One assay can be analysed with this system in 15 min.

Sodium dodecyl sulphate-polyacrylamide gel electrophoresis (SDS-Page) was performed according the method [16] in a 16% polyacrylamide gel. The gel was stained with Coomassie blue. Apparent relative molecular weights were obtained by comparison to a mixture of reduced reference proteins from molecular weight standard kit (Bio-rad). Relative mobility values (Rf) for ribonucleotide reductase and calibration proteins has been calculated from their position after electrophoresis. 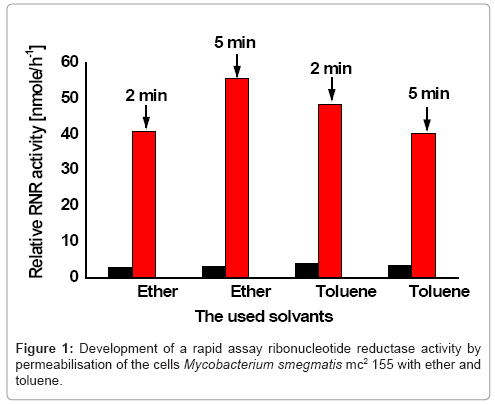 Figure 1: Development of a rapid assay ribonucleotide reductase activity by permeabilisation of the cells Mycobacterium smegmatis mc2 155 with ether and toluene. 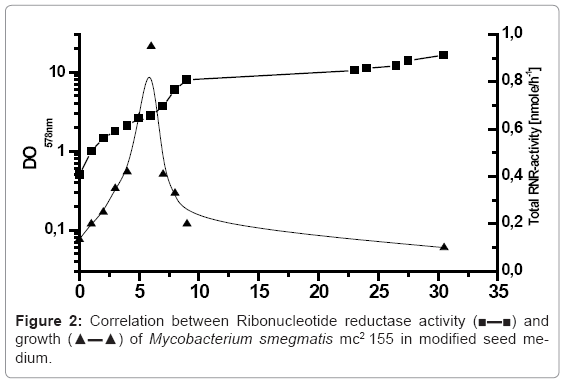 A rapid and efficient purification procedure of ribonucleotide reductases from several sources has been described using several methods of chromatography especially by gel filtration on superdex G-200 [17]. Ribonucleotide reductase activity was not detected in the crude extract; however, it was detectable in the 40-60% ammonium sulphate fraction. Furthermore, it was purified by gel filtration on the superdex G-200. The enzyme activity was stable throughout the purification procedure. However, the activity was decreased after 1 month of storage at -70°C if the concentration of protein was lower than 1 mg/ml. The partially purified enzyme was stable throughout 1.5 hour incubation during the activity assay in the presence of substrates and effectors. In order to avoid the loss of the total enzymatic activity a sorbitol was added to purification buffers. Despite the addition of protein stabilizers, total enzyme activity decreased during the purification and this decrease seems to be dependant of protein concentration. The protein solution was applied on Superdex G-200 column and eluted with buffer A. This step has lead to a dissociation of the both subunits of Ribonucleotide reductase of Mycobacterium smegmatis mc2155. Therefore, a biochemical complementation assay was necessary to identify ribonucleotide reductase activity. In the fact, that each used procedure for purification of ribonucleotide redutase of Mycobacterium smegmatis mc2155 affects the structure and the biological activity of this enzyme, this observations leads to confirm that both subunits were not able to form functionally active without biochemical complementation assay.

The authors are thankful to Prof. Dr. Auling G. Institute of Microbiology Hannover-Germany to provide us with the strain of Mycobacterium smegmatis mc2155 and the necessary facilities to conduct this research work in their laboratory. 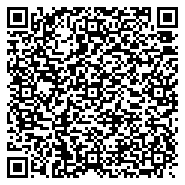