Copyright: © 2013 Kumar Y, et al. This is an open-access article distributed under the terms of the Creative Commons Attribution License, which permits unrestricted use, distribution, and reproduction in any medium, provided the original author and source are credited.

Biotoxins from certain marine fishes are not only harmful to marine animals and their native environment, but also have pharmacological importance, and can be used as medicines. An investigation was carried out to study the effects of liver biotoxins of marine fish (Chelonodon patoca), catfish (Osteogeneiosus militaries), and mackerel (Rastrelliger kanagurta) on mouse, and their established kidney and liver cell lines. Among the three toxins, puffer liver toxin was the most toxic in mouse, with 5 mouse units/ml, followed by 2.5 mouse units/ml and 0.67 mouse units/ml of catfish and mackerel, respectively. The morphological rigidity, viability, swelling and syncitia formation, followed by cell death, are the common features recorded in both cell lines. The Tissue Culture Infective Dose (TCID50) was the highest for puffer liver toxin in both cell lines, followed by catfish and mackerel liver toxin.

The miraculous oceanic water world is inhabited by a large variety of aquatic animals and fishes. The fishes are the most diversified group of the animal kingdom. There are a number of marine organisms, including some group of fishes that they are dangerous and deadly poisonous. Among all poisonous and venomous fishes, puffer fishes are considered to be the most poisonous and are found in all the oceans of the world. Although these are deadly poisonous, they command the highest price as food fish in several East Asian countries, particularly in Japan. There are many marine and freshwater fishes that contain toxins in their body. The two most common marine toxins are tetrodotoxin and saxitoxins. Tetrodotoxin is present predominantly in puffer fish [1]. The toxin is concentrated mostly in ovaries and liver, with small amount in intestine, skin, muscle and blood [2].

Despite serious public health threat by poisonous fishes to the tropical and subtropical regions, very little attention has been paid to the study of toxicological aspects of different fishes. They are dangerous to several other species, including human, by virtue of their ability to bite, lacerate or sting, or toxin substances contained in their body or organs. The problem of poisonous fishes is rapidly becoming recognized as one of the significant public health hazards, and one which can’t be circumvented of, if we were to harvest enormous food resources of our oceans. Some toxins extracted from these fishes have pharmacological importance. Hence, the scientists are continuously using these fishes as a valuable experimental animal/model.

Biotoxic fishes are those fishes which when digested, causes biotoxication in humans and animals due to the bioactive substance present in the fish. Fish biotoxins hold the promise of many medical compounds and substances useful for research in human and animal health problems. After intake of these fishes, humans may develop headache, vomiting sensation, and if concentration of toxin is high, death may occur. Therefore, the present investigation is to emphasize the toxicity of certain toxins extracted from different fishes, with the help of cell lines, to study the toxic effect of biotoxins extracted from liver tissues of three marine fish, like puffer fish (Chelonodon patoca), catfish (Osteheneiosus militaries), and mackerel (Rastrelliger kanaguta) on mouse cell lines, for development of a suitable alternate to mouse bioassay study. Moreover, this method is very sensitive and even small changes at the cellular level that may not result in the death of animal, are easily detected and demonstrated. This method prevents killing of hundreds of innocent animals for the sake of research, thereby making research more economical and ecofriendly.

The toxin was extracted from the liver tissues of the above fishes, following procedures with necessary modification [3-5]. In brief, different tissues were excised, minced and extracted, with an equal volume of 80% methanol and 1% acetic acid, in water bath maintained at 60°C for 30 minutes (min). Supernatant was collected after 30 min, and the residue was again processed twice in a similar manner. Finally, the supernatant was pooled. The supernatant was defatted with equal volume of dichloromethane. The aqueous layer was then separated and evaporated to dryness. The resulting residue was used as crude toxin.

Liver and kidney cell culture of mice was done, as per the procedure of Wenzel [6]. The Eagles’ minimum essential medium (Sigma Aldrich USA), calf bovine serum(Gibco, USA), and L–glutamine were used for the cell culture.

Toxicity assay was done, as per the following procedure [7]. The 96 well microtitre plates were seeded with 200 μl of culture medium containing 1.0×105 cells/ml, and incubated for 2 days for monolayer formation. Then 10 μl of toxin adjusted to pH 7.4, pre-filter sterilized through 0.22 μm membrane, were serially diluted 10 fold with Dulbecco’s PBS buffer. The study was conducted in triplicate. Cells with swollen or lost morphological rigidity were considered as dead. Atleast 200 cells in each well were randomly chosen, and the 50% tissue culture infected dose by Reed and Muench formula was calculated.

The extracted crude toxin of each tissue was dissolved individually in 1 ml of distilled water, so that 1 ml of test solution was equivalent to 1 gm of tissue. The amount of toxin solution for injection and the dilution that gives death time of 1-2 min was determined, and referred to as one mouse unit of the toxin.

The number of mouse units per ml of toxin was found to be 5.0, 2.5 and 0.67 for puffer, catfish and mackerel, respectively (Table 1). The puffer liver toxin injected mouse showed paralysis of hind limbs, urination, tonic spasm, gasping, hyperirritability, sluggish moment, lying in prostate condition, and during the terminal stage, micturation and defecation were recorded; whereas the mackerel liver toxin injected mouse showed sluggish movement, shivering, gasping paralysis of hind limbs, and finally death. Similar type of symptoms as in the case of mackerel, followed by death, was recorded by catfish liver toxin.

Table 1: Toxicity of liver toxins of three fish on mice.

Table 2: Mouse units/ml of toxin with their TCID50 values in liver and kidney Cell lines of mouse.

After treatment with puffer toxin, kidney cells undergo morphological deformities, and began to lose rigidity, viability, and got detached from each other within 2 min (Figure 1). The cells started degeneration, syncitia formation with dispersed cytoplasm and nuclear materials after 40 min, while some cells were found to be swollen (Figure 2). The nuclear and cytoplasmic demarcation and cell death were found to be within 1 hr and 11 min (Figure 3). The TCID50 was found to be 1.585×105/ml. Similarly, in case of catfish liver toxin, swelling, rounding, stretching and detaching of cells were observed after 44 min and 05 sec (Figure 4), and within 1 hr and 32 min, most of the cells degenerated with fusion of nuclear and cytoplasmic materials and syncitia formation (Figure 5). The TCID50 was found to be 2.512×103/ml. 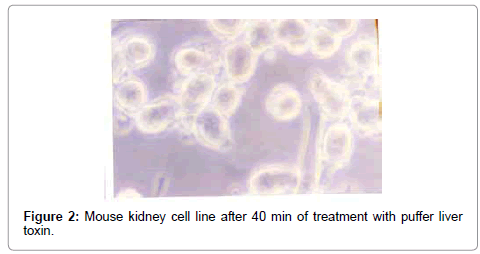 The effect of mackerel toxin was slower than the other two toxins. The fusion and swelling of cells started after 23 min (Figure 6), and after 45 min, most of the cells were clubbed and fused with degenerating cells (Figure 7). All the cells degenerated within 5 hrs, and the TCID50 value was found to be 2.215×102/ml. The swelling of cells and breaking of intracellular connection started after 3 min in puffer toxin, and the nuclear changes occurred within 16 min. The cells lost their morphology with degeneration of nucleus and loss of cell membrane, and bursting of cells (Figures 8 and 9). After 30 min, the medium became colloidal with death of all the cells. The TCID50 value was found to be 2.512×104/ml. 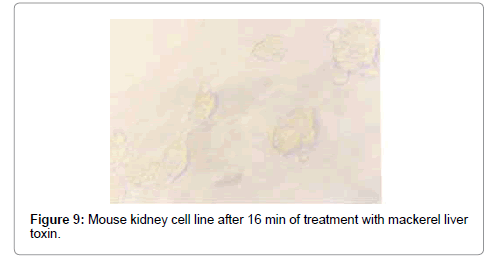 In the case of catfish liver toxin, morphological changes started after 6 min of toxin treatment with swollen, rounded and detached cells. Cell death was found to occur within 21 min, which was confirmed by trypan blue staining of the cells. The TCID50 was found to be 1.585×103/ml, whereas the effects were slow in case of mackerel toxin, which started after 30 min of treatment (Figure 10). After 30 min of syncitia formation, degenerated cells appeared which turned the growth medium to colloidal solution. The TCID50 value was found to be 1.585×102/ml. Marine toxins are those observed and extracted from certain marine fishes, are very complex in their nature. They have the ability to destroy life by complicated, and sometimes, undetermined means. Their investigation has invited speculation, and sometimes, pure fantasy [1].

Serious health problems are often reported due to marine and freshwater animals. As a result of which, continuous monitoring of the toxins are regularly done through mouse bioassay [8,9]. Detection of toxins by ELISA and HPLC are often restricted to sophisticated laboratory only [10].

The toxins are of public health importance, but the studies on human being are not possible. A simple and sensitive bioassay was used to detect the toxins also, to evaluate their toxicity. Thus, cell culture is used to evaluate the toxic effect of different fish toxins, and correlated with mouse bioassay.

The puffer liver toxin was found to be highly toxic, when compared to the other toxins.

The mean death time of one mouse unit was found to be 45 minutes and 1 ml of toxin was containing 5 mouse units. The present findings were in accordance with the result obtained by Hwang et al. [3] and Reddy [11], with subtle differences. Reddy [11] reported 6.25 mouse unit gram of puffer toxin. The puffer liver toxin was found to be most toxic in both liver and kidney cell lines of mouse. The morphological changes like swelling, syncitia, dispersed cytoplasm and nuclear material, were the common toxic effects.

Pharmacological studies on puffer poison were initiated by Murtha et al. [12]. According to them, a small dose of puffer poison can cause neuromuscular paralysis, respiratory failure, and marked hypertension to cat, dogs and rabbits. More studies have been done by various workers [13-17].

It is evident from this study that use of cell lines for toxicological studies is more sensitive and less quantity of sample is required for the assay. The changes at the cellular level were also studied simultaneously, which was possible by mouse bioassay studies. In conclusion, the morphology and viability changes induced in the mouse liver and kidney cells provided a new sensitive bioassay for puffer liver toxin, catfish liver toxin, and mackerel liver toxin.

Many researchers have worked on the effect of the marine toxins on cell lines viz. Pichardo et al. [18] used fish cell lines RTG-2 and PLHC-1, to compare the toxic effects produced by microcystins LR and RR of different concentrations. The embryotoxic effects of the marine biotoxin, okadaic acid on murine embryonic stem cells, was determined by Ehlers et al. [19]. No research has been undertaken to compare the mouse bioassay and TCID50 values.

Finally, it could be concluded that comparing and correlating the mouse bioassay and TCID50 values, the effect or lethality of toxins would be calculated as cell lines are sensitive and expensive. A large number of samples could be detected and quantified within a limited time. Also, the use of laboratory animals like mice can be minimized in toxicological research, and this assay is recommended for detecting and quantifying these toxins. The present study confirmed the more toxic nature of puffer liver toxin, followed by catfish liver toxin, while mackerel was found to be least toxic.

The authors are thankful to the Director, Central Institute of Fisheries Education, for his kind support and cooperation during the entire course of investigation.