Copyright: © 2012 Nawel O, et al. This is an open-access article distributed under the terms of the Creative Commons Attribution License, which permits unrestricted use, distribution, and reproduction in any medium, provided the original author and source are credited.

In this paper the key odorants effects of parsley ( Petroselinum crispum Hoffm) and fennel ( Foeniculum vulgare ) in the growth of Lactobacillus casei subsp rhamnosus , were studied. Parsley and fennel essential oils were obtained by hydrodistillation with 0.14% yield from parsley and 1% from fennel. All experiments were carried out in a 2L jar fermenter with an initial volume of 1.5L at 42°C, and the constant, adjusted to 200 rpm. Lactobacilli suspensions were incubated at 42°C for 12hr at 200 rpm and then a 10% (v/v) of the bacterial suspension was added to the cultures. The culture pH was maintained at 6.25 by automatic addition of 25% (w/w) NH 4 OH. For that purpose, batch cultures on MRS medium containing 15 g.L -1 of glucose were realized: the first fermentation is considered as a control, the second is characterized by the addition of 20 μL of the parsley essential oil in the growth exponential phase and the third contains additionally 20 μL of the fennel essential oil. The results show that Lactobacillus casei subsp rhamnosus can produce up to 10.96 g.L -1 and 13.78 gL -1 of lactic acid on the control fermentation and on the second fermentation, respectively. The addition of the fennel essential oil provokes an inhibition of the Lactobacillus casei subsp rhamnosus growth which is translated by the obtained weak lactic acid concentration of 5.14 g.L -1 .

The fennel is known for a long time as a medicinal plant used for the treatment of several stomach affections (aerophagia or diarrhoea) and obesity. Presently, the ripe fruit is still widely used in Arabian folk medicine systems as a diuretic, stimulant, appetizer, digestive and infantile febrifuge. The active principles have not yet been fully investigated in food and biotechnology. Because of the wide use of this plant, it was of interest to evaluate the activity of its essential oil. Searches made were concerned by the study of stigmasterol, stigmasterol palmitate, coumarin, phenol acids, essential oils, carbohydrates and hydroalcohol extracts [11-16]. The natural extracts stemming from this plant contain a variety of phenolic derivatives and essential oils with an inhibition bacteria proliferation power.

The lactic acid is a natural organic acid. It and its derivatives are widely used in food, pharmaceutical, leather and textile industries [17]. Furthermore, since lactic acid has an excellent reactivity that stems from the fact that it possesses both carboxylic and hydroxyl groups, it can undergo a variety of chemical conversions into potentially useful chemicals such as propylene oxide, propylene glycol, acrylic acid, 2,3-pentanedione and lactate ester [18,19]. Recently, there has been an increased interest in L-lactic acid production because it could be used as a raw material for the production of polylactic acid, a polymer used as special medical and environmental-friendly biodegradable plastic, and hence a substitute for synthetic plastics derived from petroleum feed stocks [20,21].

The objective of this work is the study of the effect of the parsley and fennel essential oil addition on the kinetics of the lactic acid production by Lactobacillus casei subsp rhamnosus.

The plant materials (Petroselinum crispum and Foeniculum vulgare) were collected from the Mascara region in the northwest of Algeria.

100g of seeds (Parsley or Fennel) were subjected to hydrodistillation for 5 hours. The distillate was extracted with pentane and dried over anhydrous sodium sulphate. The organic layer was then concentrated at 30°C using a rota vapour apparatus and the resulting essential oils were stored at 4°C.

The Lactobacillus casei subsp rhamnosus (LBC80 10D) strain used in all our experiments was supplied by the Rhone Poulenc group (France). It was maintained on MRS medium in the presence of 10% glycerol and preserved at -20°C. The MRS medium used in growth and inoculum preparations contained the following components (in g.L-1): 10 Soya peptone, 10 beef extract, 5 yeast extract, 2K2HPO4, 5 NaCH3CO2, 3H2O, 2 triammonium citrate, 0.2MgSO4, 7H2O, 0.05 MnSO4, H2O, 15 glucose and 1mL Tween 80. The pH was adjusted to 6.25 by 25% (w/w) NH4OH aqueous solution prior to sterilization at 108°C for 15min. The reactivation phase is realized after two successive transplantations at 42°C during 2 hours on liquid MRS medium [22].

All experiments were carried out in a 2L jar fermenter (Applikon Biocontroller ADI1030) with an initial volume of 1.5L at 42°C. The agitation speed was set at 200 rpm to insure complete mixing of the fermentation medium. The inocula were incubated at 42°C for 12hr at 200 rpm before their transfer to the fermenter in a 10%. The culture pH was maintained at 6.25 by automatic addition of 25% (w/w) NH4OH solution using a computer coupled peristaltic pump during the 24 hours of fermentation. The samples were withdrawn at desired intervals and frozen for further analysis. The fermentation batch (Control) of Lactobacillus casei subsp rhamnosus for production of L-lactic acid at a glucose concentration of 15 g.L-1 was carried out. Other cultures led in the same conditions were also prepared containing 20 μL of the parsley or fennel essential oil added during the exponential growth phase. The evolution of the biomass, the residual glucose amount and the lactic acid production are followed in regular time intervals.

Gram colouring is made regularly to control at the same time any risk of contagion and the presence of spores.

The biomass is determined by measurement of the optical density (OD) at 570 nm by a spectrophotometer HITACHI 4-2000.

Culture samples were centrifuged (13200g at 4°C for 5 min), diluted and filtered. Residual glucose and lactic acid concentrations were determined by Multi parameter Medical Analyzer. The enzymatic kit used for the lactic acid dosage is the PAP Ref-61 192 and for the glucose dosage it is the Elitech diagnosis ref - GPSL-0500.

The calculation of the fermentation kinetic parameters requires a preliminary data processing (smoothing) of the rough experimental data with the software KALEIDAGRAPH. This data processing is based on the technique of the averages slipping by using a second degree polynomial.

Calculation of the fermentation kinetic parameters

The various analyses carried out allow the following time evolution of the component concentrations present in the culture medium:

From these raw data it is possible to calculate the fermentation kinetic parameters in the batch culture by the calculation of the volumetric growth rate (r’’’x in g.L-1.h-1) and the specific growth rate (μ in h-1):

The maximal specific growth rate (μmax) was determined from the slopes of the plotted linear curve: lnX/X0= f (t).

Outputs in biomass and lactic acid (the slopes)

The biomass (Yx/s) and products (Yp/s) yields are defined as the mass ratios in biomass and metabolites formed per gram of consumed carbonaceous substrate. During this fermentation, we were interested in the yields of sugar conversion into biomass and lactic acid.

The approach used to determine the outputs consists in plotting linear curves: [(X–X0) = f (S0–S)] and [(L.A–L.A0) = f(S0–S)]. The slopes obtained from these straight lines represent respectively the outputs of sugar conversion into biomass and lactic acid.

Parsley and fennel oils were obtained with respectively 0.14% and 1% yield based on dry weight. The results of the three batch fermentations of Lactobacillus casei subsp rhamnosus control; with 20 μL of parsley or fennel essential oil are presented in figures 1-3 respectively. We notice that the development of the concentrations in biomass, residual sugars and lactic acid occurs. The initial concentration in glucose (15g.L-1) was the same for the three samples. They were inoculated with the same quantity of biomass (1.2 g.L-1). According to the obtained results, it is observed that the Lactobacillus casei subsp rhamnosus growth for the three fermentations is characterized by a short duration of the latency phase which indicates that the inoculated cells were in full exponential phase. 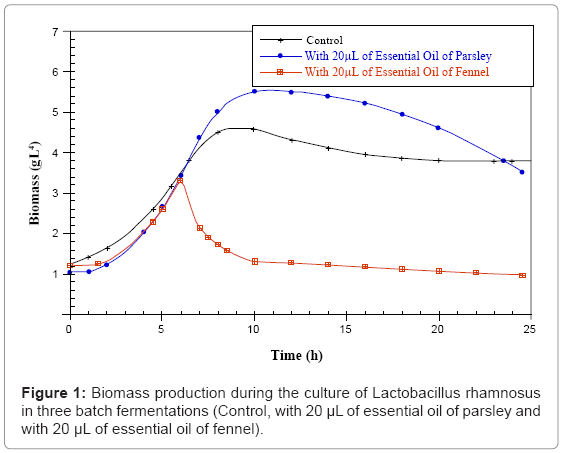 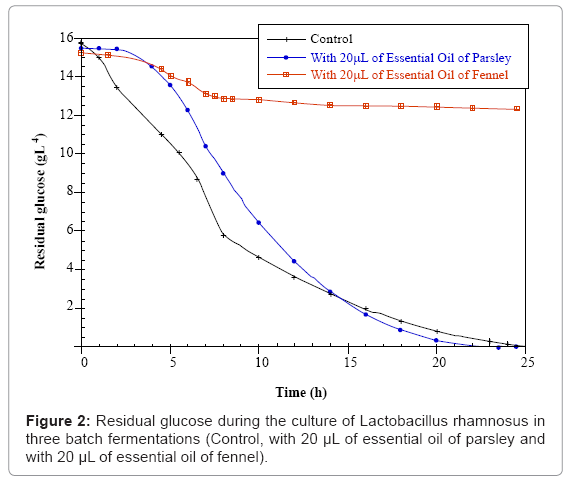 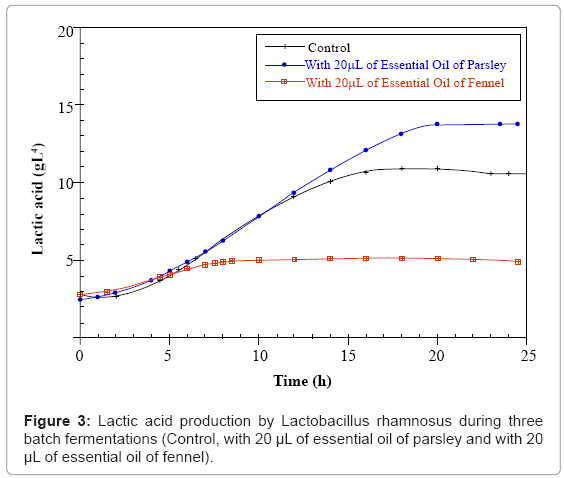 For the control fermentation, it is observed a weak biomass initial concentration of 1.2 g.L-1 which increases after 6 hours of fermentation until 3.5 g.L-1, then until 4.575 g.L-1 after 8 hours of culture (at the end of the exponential phase). The growth end is due to the glucose exhaustion in the culture medium which reaches a final value of 0.008 g.L-1 after 24 hours of fermentation. During the stationary phase (after 8 hours of culture), the strain consumes the glucose and uses it only for the cellular maintenance. In parallel, the lactic acid production starts from a value of 3 g.L-1 and reaches 10.96 g.L-1 of lactate after 24 hours of fermentation. During this fermentation that lasted 24 hours the quantity of consumed sugar is 15 g.L-1.

However for the parsley fermentation, the Lactobacillus casei subsp rhamnosus biomass starts with an initial concentration of 1.2 g.L-1 and the parsley essential oil was added during the full exponential phase after 6 hours of culture corresponding to a biomass quantity of 3.5 g.L-1. After 10 hours of fermentation, cellular concentration increases at a value of 5.51 g.L-1. For the production of lactic acid the Lactobacillus casei subsp rhamnosus culture reaches the maximum value of 13.78 g.L-1after 24 hours of fermentation. In parallel and since there is an increase in the biomass and lactic acid amounts, there is sugar consumption and it remains at the end of the fermentation 0.007 g.L-1 of glucose.

For the fennel fermentation, the addition of the essential oil is operated after 6 hours of fermentation (3.5 g.L-1 of biomass). A lyses and a remarkable decrease of the cellular biomass is noticed in correlation with the fennel essential oil addition. The quantity of biomass decreases to a final value of 0.98 g.L-1 after 24 hours of fermentation. The medium content in glucose remains high till the end of the fermentation (12.33 g.L-1) and the quantity of lactic acid produced is sharply lower than that of the control culture (5.14 g.L-1) (Figures 1,2,3).

The comparison between the three batch fermentations of Lactobacillus casei subsp rhamnosus indicates that the addition of the parsley essential oil has a positive and very significant effect, since the growth rate and the lactate quantity are improved, as well as the quantity of consumed sugar that is more important compared to the fermentation case with the fennel essential oil addition. 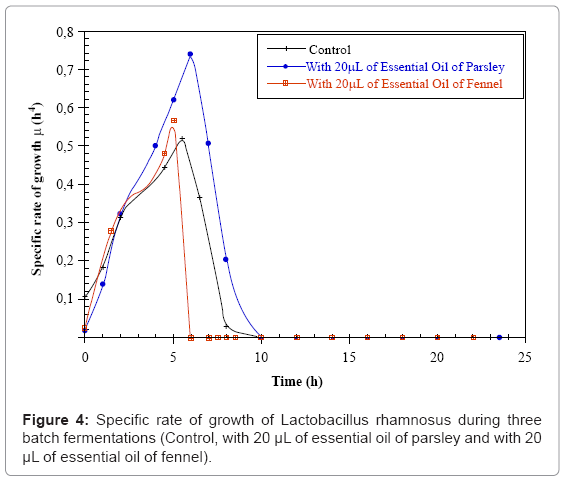 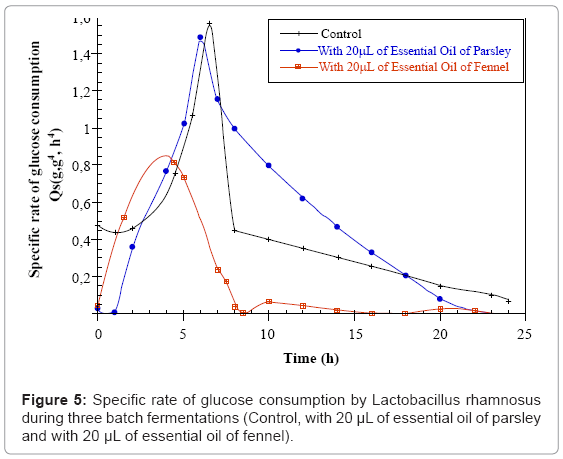 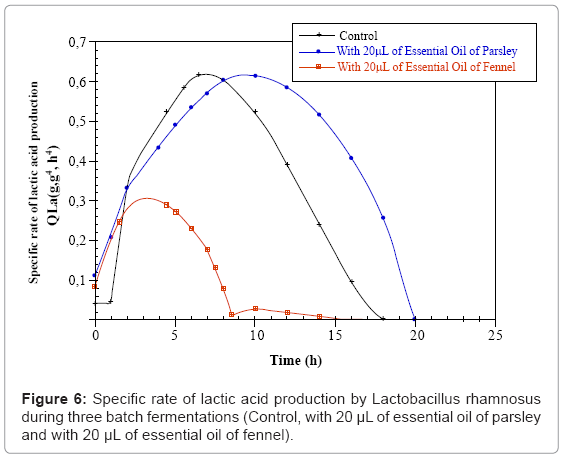 The growth kinetics may be characterized by a maximal growth specific rate (μmax) which is equal to 0.17 h-1 in the MRS medium (control) and increases up to 0.22 h-1 in the presence of the 20 μL of parsley essential oil. The third fermentation is characterized by a μmax of 0.17 h-1 before the addition of the fennel essential oil that decreases to 0 h-1 when the treatment is applied (Figures 7- 9 and Table 1). 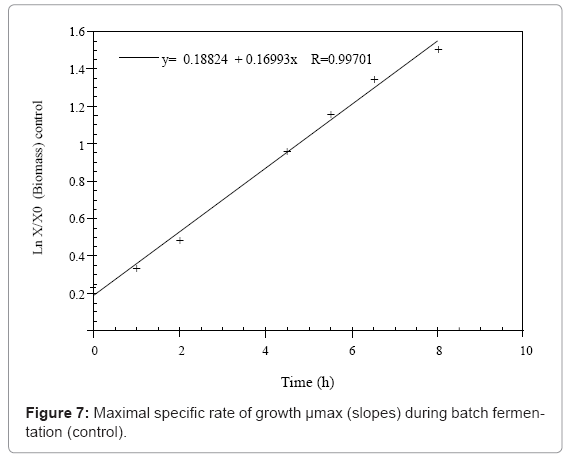 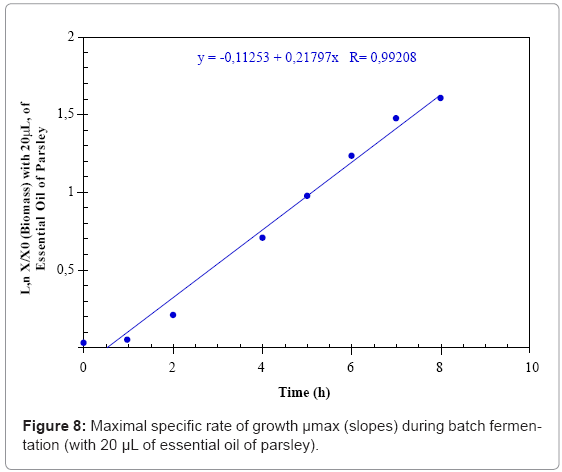 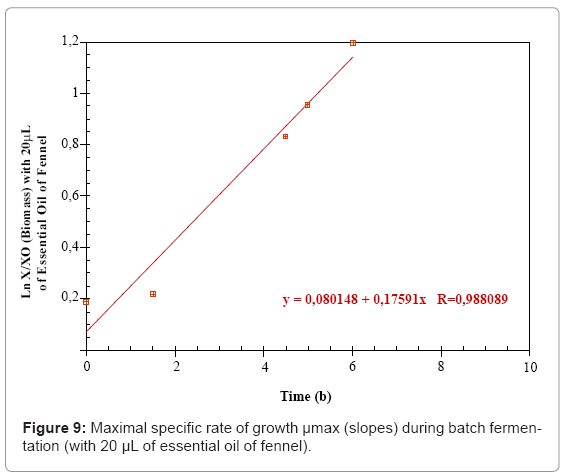 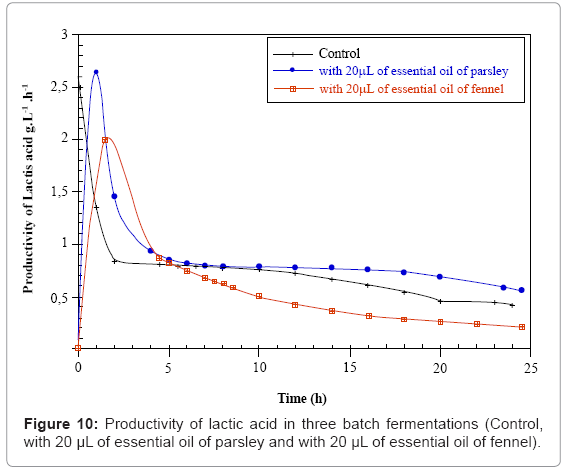 Healing plants represent a plentiful source of bioactive natural substances among which the essential oils. The objective of this work consists in the estimation of the effect of the parsley (Petroselinum crispum Hoffm) and fennel (Foeniculum vulgare) essentials oil over the kinetics of lactic acid production by Lactobacillus casei subsp rhamnosus. The results of the analysis carried out show a stimulating effect of the Petroselinum crispum Hoffm essential oil in the kinetics of lactic acid production and growth by Lactobacillus casei subsp rhamnosus and an inhibition effect of the Foeniculum vulgare essential oil from its contact with the strain.

The authors would like to thank the Pr. Annie Marc responsible for the laboratory GPBA-LSGC (Nancy-INPL-France) for their assistants in the realization of this study.