Enteroccoccus in Water, Sediment and Clams in a Tropical Environment,Maracaibo Lake, Venezuela

Copyright: © 2013 Montiel M, et al. This is an open-access article distributed under the terms of the Creative Commons Attribution License, which permits unrestricted use, distribution, and reproduction in any medium, provided the original author and source are credited.

The genus Enterococcus has widespread extra enteric sources and reservoirs. It has been suggested that coastal and Great Lakes States adopt enterococci as an alternative indicator for the monitoring of recreational water quality. Limited information, however, is available about the presence of enterococci in Lake Maracaibo, which is an important estuary in Venezuela, with the income and interchange of the Caribbean Sea, and is used by the people for recreational purposes and the culture of marine organisms. In this study, the density and species composition of enterococci in sediment, clams and water were examined at Lake Maracaibo.Enterococci was enumerated by the Most Probable Number Technique (MPN), and isolated by standard methods. Results obtained by MPN analyses indicated that enterococci were present in all samples, and their densities were generally higher in clams than sediment and water with means of 1.0x106 MPN/100 g, 2.1x103 MPN/100 g, and 6.0x101 MPN/100 ml, respectively. Dominant Enterococcus species were E. faecalis (65%), E. casseliflavus (20%), E. sanguinicola (5%), E. faecium (5%), and unidentified strains (5%). Results suggest that some enterococci are able to persist in Lake Maracaibo, especially in clams and sediment, for a prolonged amount of time after being introduced.

Enterococci are spherical or ovoid cells arranged in pairs or chains, Gram positive non-spore-forming, obligately fermentative chemoorganotrophs. They are important members of gut communities in many animals, and opportunistic pathogens that cause millions of infections annually. They can be found in soil, water, and plants [1]. When they are found in water it is associated with fecal matter. In the last two decades, the genus Enterococcus has been believed to be one of the most common causative agents of nosocomial diseases in humans following staphylococci [2-4]. Additionally, some vancomycinresistant enterococci belonging to the group of zoonoses (Slovak Regulation No.626/2004) can be transmitted to humans via food chain, and are employed as vectors in dissemination of resistance genes inside as well as outside of genus. This feature shifts them to the group of potential reservoirs of resistance genes with significant risk of resistance transfer to obligate pathogens, such a Staphylococcus spp. or Listeria spp. [5-7]. Also, Enterococcus has been proposed as fecal indicator in some countries, especially in recreational waters. The vast majority of clinical enterococcal infections in humans are caused by Enterococcus faecalis (around 80% of clinical isolates) and Enterococcus faecium (most of the remainder), with occasional infections being caused by E. durans, E. gallinarum, E. casseliflavus, E. avium, E. hirae, E. mundtii, and E. raffinosus [8,9]. The emergence of Enterococcus faecalis and Enterococcus faecium was paralleled by increases in glycopeptide and high-level aminoglycoside resistance, both important compounds for the treatment of human infections [10]. Although Enterococcus faecalis is the causative agent in most enterococcal infections, a partial replacement of Enterococcus faecalis by Enterococcus faecium has been noted in the last years, and presently, up to one-third of enterococcal infections in some countries is attributed to this species [11,12].

The presence of enterococci as an indicator of fecal contamination has been used in management of recreational water quality standards as it correlates best with the incidence of swimming-related illnesses [13,14].

Studies conducted by EPA to determine the correlation between different bacterial indicators and the occurrence of digestive system illness at swimming beaches suggest that the best indicators of health risk from recreational water contact in fresh water are E. coli and enterococci. For salt water, enterococci are the best [15].

However, little is known about the behavior of FIB in tropical environments, particularly in estuaries, since most studies have been performed in temperate to cold locations [16].

Study area. Lake Maracaibo is a tropical lake and remains warm (28-32.5ºC; mean 30ºC) throughout the annual seasonal cycle; it is the largest lake in South America [19], located at Zulia State, Venezuela. This estuarine lake is connected to the Gulf of Venezuela via the Strait of Maracaibo and El Tablazo Bay, and is brackish due to intrusion of salty water from the strait [19]. Lake Maracaibo receives large loads of nutrients from tributaries, sewage discharges, and agricultural sources [20]. 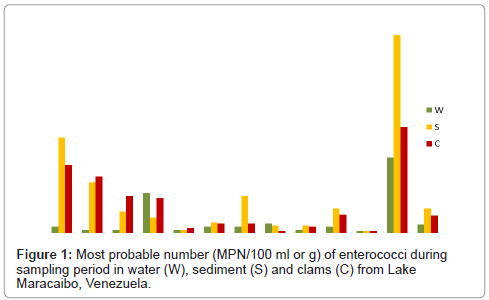 Densities were generally higher in sediment than clams and water with means of 25.9 MPN/100 g, 11.4 MPN/100 g, and 5.6 MPN/100 mL, respectively. Higher concentration of enterococci in sediment and clams than water has been reported before. LeFevre and Lewis 2003, defined a transport pathway for enterococci that begins with the primary source, followed by deposition to a sink, in which enterococci are temporarily sequestered (e.g., sediments), and eventually it can become a secondary source when organisms reenter the water column following a disturbance [25] and can also be filtered by shellfish as clams. Culturable enterococci cells persist longer in sand than water and some studies have documented growth of this microorganism rather than loss, in beach sand [26].

Survival in sediment may be enhanced relative to water because of protection from sunlight/UV inactivation, buffered temperatures, and availability of nutrients accumulated from algae, debris and plankton [27]. Bacteria may also be protected within biofilms on moist sand grains [28]. In some geographical regions, highly favorable conditions may be encountered outside the host. In relatively warm, nutrientrich, pristine tropical soils and waters, EC have been found at densities far exceeding the concentrations found in highly-polluted temperate waters [29]. Enterococcus densities were higher during November to March related with dry season in Venezuela (Figure 1). Other research reported higher values during summer months.

Sixty strains of enterococci were isolated from ninety samples collected form water, sediment and clams at Curarire beach, Lake Maracaibo. The most frequent species isolated was E. faecalis (65%) followed by E. casseliflavus (20%) (Figure 2). The water samples obtained from different points, E. faecium and E. faecalis as the most frequent species isolated followed by E. gallinarumand E. casseliflavus [30]. E. faecalis is the most common specie isolated from clinical samples (80-90%), interacts with many other organisms and has effects on the environment. In the other hand, E. casseliflavus has been reported in 20% of beach samples and it is associated with natural source, such as plants [31-33]. This is consistent with the results found in this research. 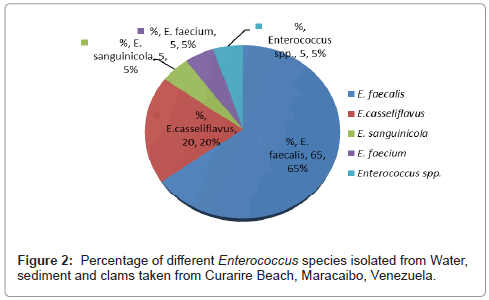 Results showed the importance of surveillance enterococci in tropical water especially in Venezuela in order to determine the ability to survive in Maracaibo Lake and if it’s necessary to include it in the Venezuelan guidelines.

This research was supported by the Consejo Cientificoy Humanistico (CONDES) University of Zulia, Maracaibo, Venezuela. 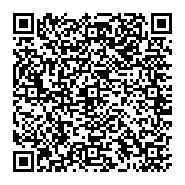