Copyright: © 2012 Tehrani A, et al. This is an open-access article distributed under the terms of the Creative Commons Attribution License, which permits unrestricted use, distribution, and reproduction in any medium, provided the original author and source are credited.

The present study was carried out on broilers to study the effect of Artemia Urmiana on hematological parameters for a period of 56 days (8 weeks). In this study 190 one-day old broiler chicks from Ross 308 strain were divided into five equal groups: L1, L2, L3, L4 (Test groups) and control group. The control diet contained 5% fish meal, and the other four groups contained 2.5%, 5%, 7.5%, and 10% brine shrimp. At the end of the 7th day, blood samples were collected from all the experimental groups and analyzed for the following parameters: RBC, WBC, Hb, PCV, MCV, MCH and MCHC. The blood sample collection was repeated at the end of 14th, 21th, 28th, 35th, 42th, 49th, 56th days respectively, and the blood parameters determined as well. The results demonstrated that in Artemia-fed groups the PCV, MCV, MCH, Lymphocytes and TP were more than control group, whereas Leukocytes and Heterophils were lesser than control group. However, RBC, Hb and MCHC were approximately equal to control group.

Artemia or Brine shrimp is a crustacean animal, lives in over 500 tropical and subtropical regions in the World [1], and has two species as Artemia urmiana (UA) and Parthenogenetica Artemia (PA) in Iran. Such animal was reported by Gunter in 1899 [2] for the first time and named Artemia urmiana by Clark and Bowen in 1976 [3]. All stages of Artemia from cysts and newly hatched nauplii to adult Artemia are utilized as food sources in aquaculture; however, there are scarce researches regarding the Artemia usage in poultry nutrition. In study by Zareia used Artemia meal (biomass) as a substitute for fish meal in broiler diet. Some studies approved that Artemia meal could be used as a feed ingredient in poultry nutrition [4-8]. The amino acid content of Artemia has been specified in different regions [9]. Thus, the Artemia is rich of amino acids which are efficient for broiler chick diet due to high digestibility, fatty acids and amino acids compared to fish meal although it varies in every region [10,11]. Commonly, Haematological parameters measurement provides valuable information in human and animal medicine. Unfortunately, due to lack of information of such parameters, blood profile is not used widely in avian medicine [12,13]. Although there is limited information in this field, evaluation of blood profiles of broiler strains have been assessed by several studies [14-17]. Talebi et al. [18] demonstrated that a significant increase of RBC and Leukocytic parameters was observable and haematological profile in broiler chicks (except heterophils and H / L ratio). Islam et al. [19] illustrated that the amount of RBC, Hb and PCV rise along with animal growth in three studied races. Nirmalan and Robinson [20] found the amount of lymphocytes, monocytes, heterophils, eosinophils and basophiles in poultries and quails at various ages, and demonstrated that through age increase, amount of all mentioned parameters except heterophils will be increased. Several other studies have been conducted on haematological parameters in poultries such as [21-25] and etc. The aim of present study is to evaluate haematological parameters in broiler chicks fed by diet containing AU.

In the experiment 190 one-day old broiler chicks from 308 Ross strain evaluated, provided from Urmia Chakavak institution (one-day chick producer unit), were purchased in February 2011. These chickens transferred to the Faculty of Veterinary Medicine, Urmia University and after six or seven days, the chicks were divided into five groups randomly (40 chicks in each experimental group and 30 chicks in the control group in 19 pens, each pen containing 10 chicks, L1, L2, L3, L4 (four experimental Groups and one control group). Furthermore, chicks were located in a standard single cages wire, with same environmental conditions for eight weeks, and received vaccines in the experimental period. During the eight weeks blood samples, including 1 ml of blood in vials with 2 mg ethylene-diamine tetra-acetic acid (EDTA), were collected for haematological tests from the jugular and brachial veins [26,27].

Table 3: The number of red blood cells in experimental and control groups

sort of Artemia meal as Urmia Lake Artemia Meal (ULAM) was replaced with fish meal proteins, in experimental groups, in 4 levels of protein (2.5, 5, 7.5 and 10% respectively). The experiment was performed during 8 weeks, somehow traits relating to broiler performances measured and analyzed (Haematological parameters). Additionally, standard broiler diets had 5 percent fish meal, hence the protein amount of such fish meal were counted (Control group), and different levels of Artemia protein in one kind of Artemia including 2.5, 5, 7.5, 10 percent replaced with fish meal protein (Experimental groups). In each stage (1, 2, 3) 5 types of rationing were recorded through mentioned percentages of Artemia, and each stage elongated up to 16 days. In the first week of starter stage, the chicks consumed a usual diet without Artemia, whereas in the second week of this stage added Artemia to poultry diet. The biomass harvesting methods of Artemia urmiana was originated from by technique sorgeloos [28].

Obviously, sugar, powered milk, multivitamin and water were fed to chickens for the first 1-2 days. Subsequently, corn meal and water fed to the chickens solely until through one-week age. The starter rations served to L1, L2, L3, L4 and control groups after 7th day. In addition, food rations were changed in each stage, and in 6th day they divided into 19 pens. The first 4 cages named as L1 group, the second 4 cages as L2 group, the third 4 cages as L3 group, the fourth 4 cages as L4 group, and finally 3 cages as control group. Furthermore, 2.5% Artemia was added to the first group (L1), 5% Artemia to the second group (L2), 7.5% Artemia to the third group (L3), 10% Artemia to the fourth group and 0% Artemia to control group. Moreover, multivitamin powder and amino acids were prepared again and fed during breeding period, in 20th days, and the other fed in 39th days which contained vitamin A, D3, E, B2, B6, C, K3, Nicotinamide, pantothenate, and amino acids: L_Methionine, L_Cysteine and L_Lysine.

Two vaccines were used during this period:

2. Newcastle vaccine with LaSota strain (Italian oil) which was injected by automatic needle in 13th days, 0.5 cc per chicken subcutaneously to the right side of the sternum, by vaccinators.

Sampling procedures: The sampling procedure has been started since 14th day and 7th day of experimental period and feeding with Artemia respectively. Blood samples were collected in an EDTA anticoagulant in 7th day, from jugular veins using 1 ml EDTA syringe with 25 gauge needles, and repeated every 7 days.

Statistical analysis: In order to analyzing data the Duncan test and SAS/STAT program were utilized for each haematological parameter between groups [31].

Importance of Artemia in poultry nutrition

Table 7: The number of white blood cells in experimental and control groups 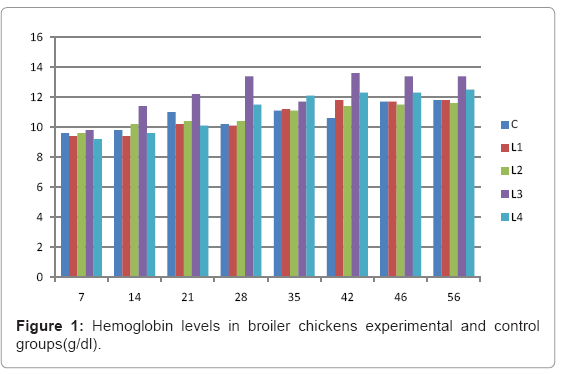 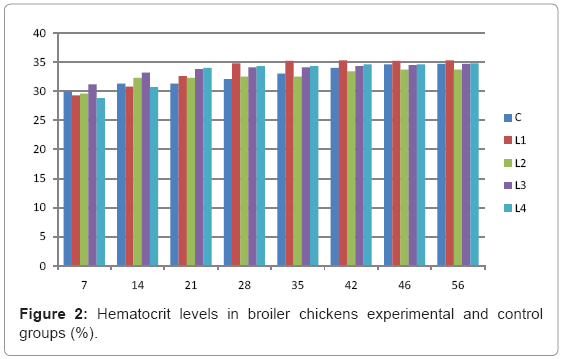 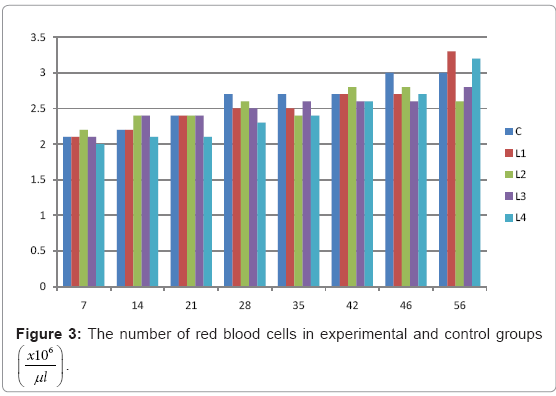 Figure 3: The number of red blood cells in experimental and control groups 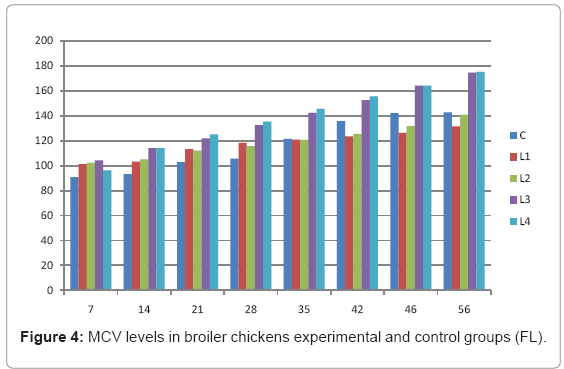 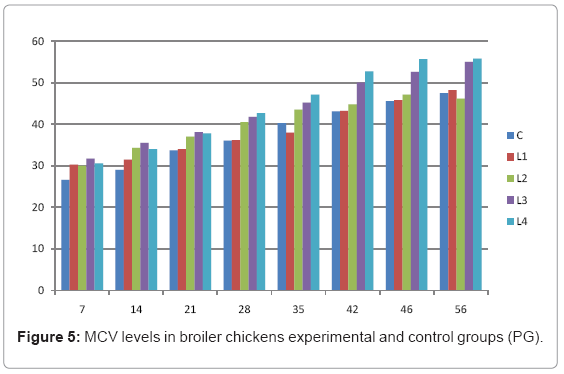 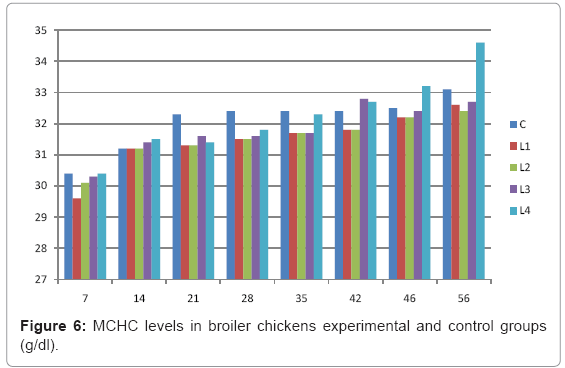 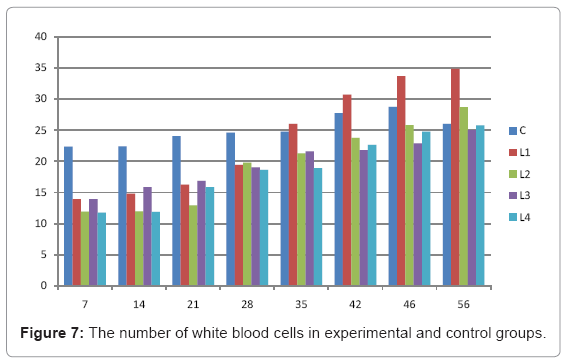 Figure 7: The number of white blood cells in experimental and control groups. 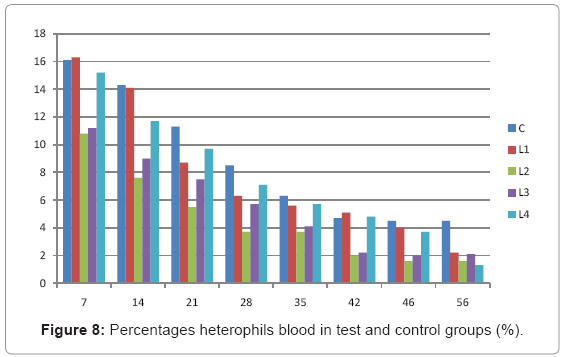 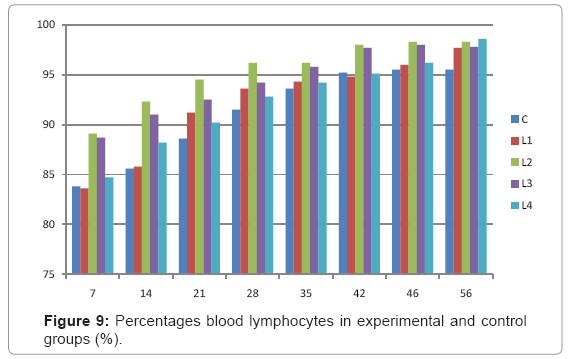 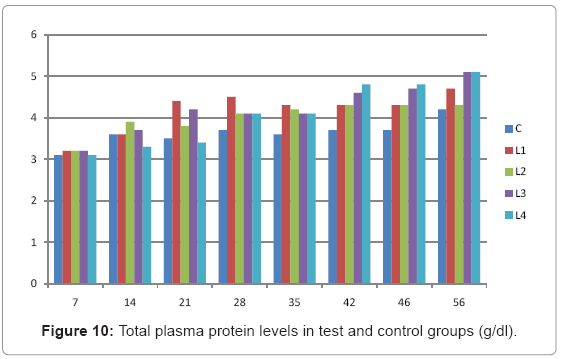