Copyright: © 2012 Shukla S, et al. This is an open-access article distributed under the terms of the Creative Commons Attribution License, which permits unrestricted use, distribution, and reproduction in any medium, provided the original author and source are credited.

Stereospermum suaveolens (DC.) is a multipurpose tree endowed with medicinal properties and good timber wood quality. It has analgesic and wound healing property. It is one of the important tree species used in the preparation of ayurvedic formulation known as Dashmula, in which roots of Dashmula tree species are used in preparation of ayurvedic formulations. Wood is employed for construction work, planks and beam, carts, carriages and wagons, furniture, cabinet work and tool handles. The destruction of this plant species is severe and planting of seedlings is almost negligible. Due to low germination and unsuccessful vegetative propagation, in vitro regeneration of Stereospermum suaveolens through micropropagation was studied as a tool for large scale propagation. In the present study, shoots were initiated from the nodal segments of Stereospermum suaveolens further shoot proliferation was achieved on MS medium supplemented with different concentrations of cytokinins and additives.100% root initiation was achieved in the MS medium supplemented with IBA. Different substrates were evaluated during hardening phase. The plants of S. suaveolens grown on coco peat showed 84.6 percent survival and those on soil mixture showed 76.47 percent survival.

Exploitation of medicinal plants for commercial use coupled with the destruction of underground parts, slow reproduction, slow growing and habitat-specific nature, are the crucial factors in meeting the goal of sustainability [3,4]. In Dashmula species, the destruction is severe due to total uprooting of plants since the roots are the source of active components. The destruction of these plants is severe and planting of seedlings is almost negligible. The application of in vitro culture for propagation of Dashmula tree species will help in sustainable availability of propagules and plant products [5]. The tissue culture of forest trees has shown promise in obtaining regenerants and clonal multiplication for domestication of wild populations, afforestation and economically important trees that have been cultivated for generations. Considering the importance of this medicinal tree for medicinal uses, pharmaceuticals and industries, it can be exploited at the commercial level. The medicinal value indicates that the use of various parts (leaves, roots, bark, etc.) of this tree species as plant extracts may be helpful in overcoming the disorders/disease predominant in the many rural areas of the country [6].

Furthermore, rising demand with shrinking habitats may lead to the local extinction of many medicinal plant species. Hence keeping the importance of this tree in view, it was selected for present investigation. The present study is focused on the effect of additives on in vitro shoot proliferation of Stereospermum suaveolens.

Nodal segments from field grown seedlings and terminal twigs of one and two-year-old tree were used as explants. The nodes were cut from healthy seedlings, surface sterilized with 0.2% (w/v) aqueous mercuric chloride for 5 minutes and washed 3-4 times with double distill water. The sterilized nodes were inoculated on different plant tissue culture medium such as MS [7], WPM [8] and SH [9]. The best result was observed in MS medium and hence the experiment was carry forwarded with different concentrations of plant growth regulators and additives. Nodes of developed shoots were placed on MS medium supplemented with different concentrations of BAP and Kinetin to study the effect of plant growth regulators on shoot proliferation. The effect of different concentration of PVP, citric acid, casein hydrolysate, adenine sulphate and activated charcoal in MS medium supplemented with 0.44 μM on in vitro shoot proliferation was investigated by inoculating the in vitro nodes grown in standardized medium at 25°C under 16 h light and 8 h dark regime. 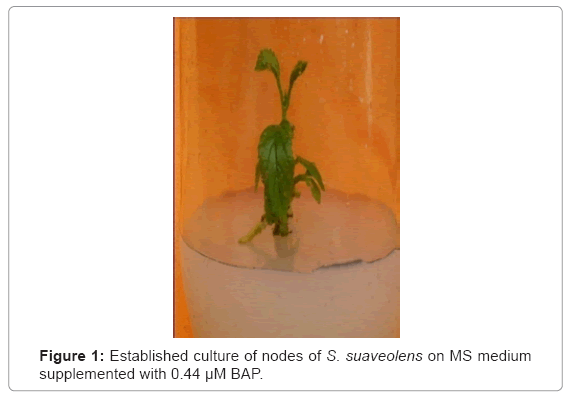 Table 1: Effect of adenine sulphate (AS) on shoot proliferation of S. suaveolens. 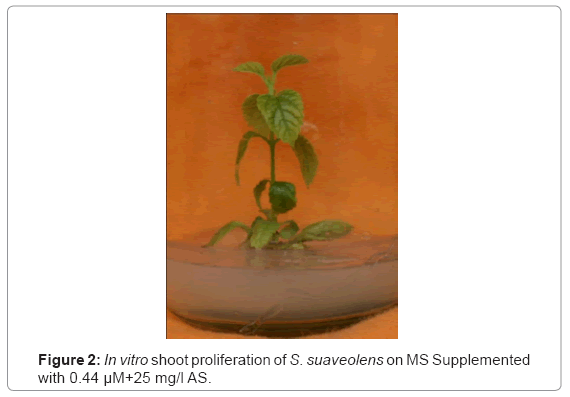 Figure 2: In vitro shoot proliferation of S. suaveolens on MS Supplemented with 0.44 μM+25 mg/l AS.

Table 2: Effect of PVP on shoot proliferation of S. suaveolens. 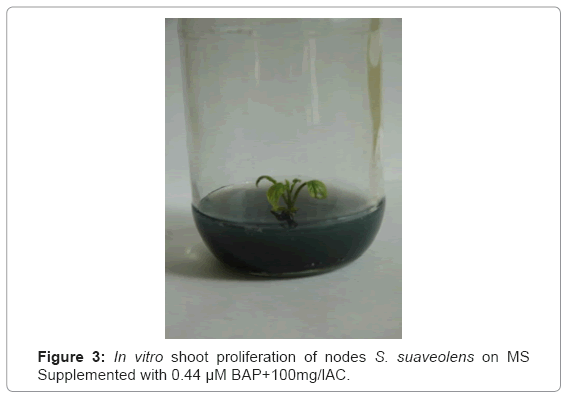 Authors are thankful to Prof. K.C.Upadhyaya, Director, Amity institute of Biotechnology, Amity University (Noida) for the continuous support and guidance.