Isolation, Optimisation and Purification of Lipase Production by Pseudomonas Aeruginosa

Copyright: © 2011 Zouaoui B, et al. This is an open-access article distributed under the terms of the Creative Commons Attribution License, which permits unrestricted use, distribution, and reproduction in any medium, provided the original author and source are credited.

Six isolates of lipase producing (Ps1, Ps2, Ps3, Ps4, Ps5 and Ps6) were secreened from wastewater on a selective medium agar that contained tween 80 or olive oil as the only source of carbon. The isolate showed highest lipase activity was Ps5 which later was identified as Pseudomonas aeruginosa. The effect of media composition was analysed to maximize production of lipase. The maximum extracellular lipase present in the broth was purified 11 folds with an overall yield of 65.51 % through purification procedure of ammonium sulphate precipitation and DEAE cellulose chromatography. The purified lipase had maximal activity within the pH range of 6-8, with an optimum PH of 7, and within the temperature range of 25 – 35°C, with optimum temperature for the hydrolysis of olive oil at 35°C. The lipase activity of the enzyme was enchanced by Ca+2 and Mg+2 but strongly inhibited by heavy metals Zn+2, Cu+2and Mn+2.

Lipases are glycerol ester hydrolases (EC: 3.1.1.3), which hydrolyze ester linkages of glycerides at water-oil interface. During hydrolysis lipases pick acyl group from glycerides forming lipase-acyl complex, which then transfers its acyl group to OH group of water. However, in non-aqueous conditions, these naturally hydrolytic enzymes can transfer acyl groups of carboxylic acids to nucleophiles other than water [12]. Thus lipases can acylate alcohols, sugars, thiols and amines synthesizing a variety of stereo-specific esters, sugar esters, thioesters and amides [5,16].

Microbial lipases have already established their vast potential regarding to their usage in different industries. The interest in microbial lipase production has increased in the last decades. Due to the versatility of the molecular structure and catalytic properties, these enzymes have potential biotechnological application in different industrial sectors such as food, waste water treatment, cosmetics, oleo chemical, pharmaceutics, detergents and in the fuel sector, which applies lipase as catalyst for synthesis of esters and for trans esterification of the oil for the production of bio diesel [14].

Generally, the enzymes of industrial interest are produced in the presence of inducers in the case of lipases, the presence of triacyl glycerol, surfactants, vegetable oils, oil industry wastes or their hydrolysis products in the culture medium have, in most cases, an inducible effect on lipase production [4]. Most of the well studied microbial lipases are inducible extracellular enzymes [17]. They are synthesized with in the cell and exported to its external surface or environment. Extracellular lipases have been produced from microorganisms, such as fungi, yeast, and bacteria beside from plants, and animals. Commercial lipases from Pseudomonas genus from Pseudomonas cepacia, Pseudomonas alcaligenes, Pseudomonas mendocina [15]. These lipases express different physicochemical properties that depend on metal ions, substrate, pH and temperature. The aim of this study is to analyse the influence of media components on the production of lipase and to purity and characterize lipase produced on a common production medium using Pseudomonas aeruginosa.

The bacterial strain Pseudomonas aeruginosa used in this study was isolated from a wastewater at sidi bel abbes, Algeria. The isolates were identified on the basis of various morphological, physico-chemical, and biochemical characteristics. Lipolytic bacteria are typically detected and secreened through the appearance of clearing zones by using a selective medium [11]. Which was containing Tween 80 or olive oil as the only source of carbon? The diameter ratio of clear zone and colony was measured.

The flasks were incubated at 35 °C with a constant shaking at 125 rpm for 3 days. The cell was separated by centrifugation at 10000 rpm and 4 °C for 20 min. The supernatants were collected and used to determine the lipase activity. The isolation expressed the highest activity was selected for further studied.

Protein was measured photometrically by the method of Bradford with Coomassie protein Assay reagent [2].

Lipase activity was determined titrimetrically using olive oil hydrolysis [13]. 1 ml enzyme solution was added to the assay substrate containing 10 ml of 10% homogenized olive oil in 10% gum acacia, 2 ml of 0,6% CaCl2 solution and 5 ml of 0,2 mol/ l phosphate buffer, PH 7.2. The enzyme-substrate was incubated on orbital shaker at 125 rpm at 35°C for 1h. 20 ml ethanol –acetone (1:1) was added to stop the reaction. Liberated fatty acids were titrated with 0.1mol/ l NaOH using phenophtaline as indicator. The reaction mixture without the enzyme was titrated in the same way and used as blank. One lipase unit was defined as the amount of the enzyme that released one μmol fatty acid per min under standard assay conditions [7].

Lipase purification was carried out at 4°C. The culture medium was centrifuged at 10000 rpm for 20 min to obtain crude enzyme, the supernatant fluid was subjected to precipitation with ammonium sulphate to 40 % saturation and stirred for 2h. The precipitate was removed by centrifugation. Lipase activity both in the precipitate and supernatant was determined.

Additional ammonium sulphate was added to the supernatant to bring the saturation to 60 %. The precipitate were collected, dissolved in buffer PH 7.2 and dialyzed against same buffer. The enzyme mixture was loaded onto the DEAE cellulose column (15 x1.5 cm) equilibrated with the phosphate buffer. The enzyme was eluted with a linear gradient of 0-1M NaCl in the same buffer at a flow rate of 1 ml/min. The active fractions that contained lipase enzyme were pooled, dialysed and assessed for protein content. The resulting enzyme was utilised for the characterization of the extracellular lipase. The protein content at each stage of enzyme purification was determined accordingly to Bradford et al. with bovine serum albumin as the standard

Determination of PH and temperature optimum

The temperature and PH optimum of purified lipase was determined at different degrees ranging from 20-50°C and PH values from 3 to 10. To determine the effect of temperature on lipase activity, purified enzyme and substrate were incubated at various reaction temperatures before starting the experiment and the enzyme assay was performed to determine the optimal temperature titrimetrically using olive oil as substrate. The optimal PH was determined by incubating the enzymesubstrate at various PH from (3 to 10) and assayed for lipase activity.

Thermo stability and pHstability of lipase

For determining the effect of metal ions on lipase activity, the purified enzyme were preincubated with 1 mM of Ca+2, Mg+2, Mn+2, Cu+2 and Zn+2 for 1h at 30°C and the residual activity was determined using olive oil as substrate under standard assay conditions. Figure 1: The clear zone displayed by lipase around the Pseudomonas sp colony on the emulsion Tween 80-agar (A) and olive oil-agar (B) at 30°C after 96h of incubation.

Table 1: The diameter ratio of clear zone and colony of the isolated bacterial.

The Ps5 was identified and found that it is a member in Pseudomonas genus. Therefore, the Ps5 was classified as Pseudomonas aeruginosa.

Four different media were used for lipase production by Pseudomonas aeruginosa. The results in (Figure 2) showed that medium (C) with dextrose as carbon, olive oil an inducer of lipase gave the maximum biomass and activity 18.36 g/l after 48 h. In the present study lipase production with different compositions were studied to maximise the production of lipase, the medium (C) presented the highest activity of 41.6 U/ml with specific enzyme activity 48.23 U/mg at 35°C after 24h (Figure 3).Lipase production in medium (A) without dextrose was 16.7% less as can pored to the medium (C) and the medium (D) with Tween 80 and dextrose produced 50% less lipase. Production studies on medium (B) shows a 75 % reduction in the production of lipase. Some Authors stated that lipase production greatly affected by the composition of the medium [10]. Based on these results, dextrose was selected as the main component for the fermentation medium and olive oil by Pseudomonas aeruginosa. Olive oil was better inducer than Tween 80, under the test conditions whereas dextrose was the best carbon source for lipase production. In fact, dextrose has been considered as a growth medium for microorganisms providing a satisfactory supply of nutrients for growth. 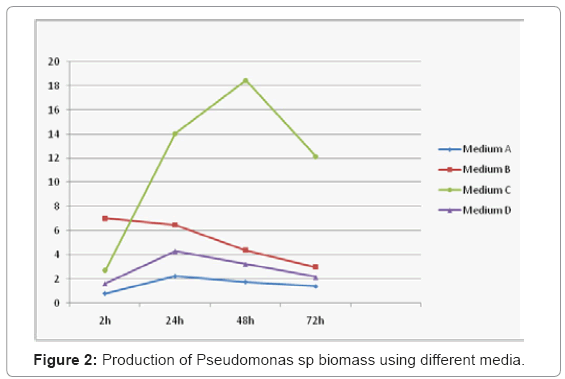 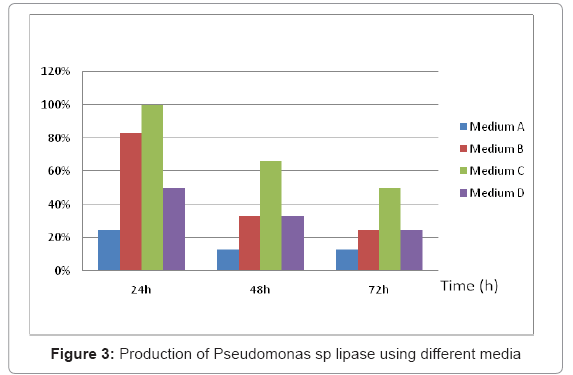 In conclusion, the Pseudomonas aeruginosa strain was found to be the best lipase producer. Wheat dextrose and olive oil were the best substrate and inducer, respectively for lipase production by this strain.

The crude enzyme was subjected to purification, maximal activity, specific activity, and yield (21.5 U/ml, 25.65 U/mg and 51.68 %) were detected at 40 % ammonium sulphate respectively (Table 2). By increasing the ammonium sulphate concentrations to 60 % a slight decrease in total activity was obtained. The specific activity 204.12 U/mg with yield of 65.51 % was obtained after the single step purification on DEAE cellulose chromatography (Table 2).

Initial PH of the culture broth is one of the most critical environmental parameters affecting both growth and lipase production. The results showed that the Pseudomonas aeruginosa was able to grow in the PH range from 6to 8 (Table 3) and reached the maximum lipase activity 42 U/ml at PH 7.0. These data are in agreement with that of Yuzo et al. [18] who reported that maximum lipase activity from Pseudomonas fluorescens HU 380 was detected at PH 7.

The results showed that maximum lipase activity detected at 35°C (Table 4). A decrease in the lipolytic activity were observed above 40°C and completely ended after 45°C. Such results are similar to that reported for many bacterial species [6].

Maximal thermo stability of the lipase was observed in the temperature range of 25 to 35°C (Table 6). The enzyme was found to be completely stable at 35°C after 1h. At 30°C, the enzyme maintained 81% after initial activity after 1h.

Among the metal ions tested, enhancement in the enzyme activity was observed in presence of Ca+2 with 121% and Mg+2 with 112% relative activity when compared to control (Table 7). These ions have been reported to play role as lipase cofactor [8].

Calcium ion, especially, is used in Ca+2 binding processing which impact to position specificity on active site [1]. Same lipases produced by Pseudomonas sp. Have been found to be Ca+2dependent, however Ca+2 exerted inhibitory effect on Pseudomonas sp Strain [13]. However, the hydrolytic activity of the enzyme was inhibited by heavy metals Zn+2, Mn+2 and Cu+2 with 32% relative activity.

Out of 36 bacterial isolates obtained from the wastewater at Sidi Bel abbes, Algeria, 6 exhibited lipase activity. Pseudomonas aeruginosa proved to be the best lipase producer various physicochemical parameters were studied to determine the optimum conditions for its lipase production. The obtained results showed that the medium composition for lipase production was (1 bacto peptone, 3 yeast extract, 20 dextrose, 10 olive oil, 0.7 K2HPO4, 0.3 KH2PO4, 0.5 MgSO4, 0.1 MnCl2 g/l ) at PH 7, 35°C and 125 rpm in 100 ml in 500 ml flask. The purified lipase showed optimal activity in a wide range of temperature and PH values. Moreover, because of its pronounced thermal stability as well as preservation of activity and stability.

We are grateful to the technical staff in the department of biology, faculty of science, sidi Bel abbes and Mascara universities, Algeria