Copyright: © 2012 Tanaka T. This is an open-access article distributed under the terms of the Creative Commons Attribution License, which permits unrestricted use, distribution, and reproduction in any medium, provided the original author and source are credited.

Silkworm is scientifically named as “Bombyx mori”, belonging to Lepidoptera family. Unlike the other wild insect in the same family, the ability to move and fly long distance in search of food is weakened or lost. They have been known one of the earliest domesticated insects kept by human beings. These characteristics are very suitable for manufacturing units or using experimental insect.

The Bombyx mori nucleopolyhedrovirus (BmNPV) is a kind of baculovirus, and expression and purification of proteins using the BmNPV were established by Dr. Maeda et al. [1-2]. In this technology, recombinant virus is prepared by inserting an objective protein gene to virus genome, and is injected into silkworm for the expression of recombinant protein. Large amount of recombinant protein is produced in hemolymph or fat bodies based upon the signal sequence. The expressed protein has similar posttranslational modifications and physiological activity in many cases compared with those in mammalian cells except for glycosylations [3-5]. Cytokines such as murine IL-3k [3], human GM-CSF [6], human Interferon-β [7], and human M-CSF [8], human growth hormone [9], canine parvovirus antigen [10], and malaria antigen [11] have been reported to be expressed in silkworm.

Taking particular note of these excellent characteristics of recombinant protein production in insect, we have been developed companion animal medicines with this technology. In 1994, feline interferon was commercialized as the first medicine produced using silkworm expression system. In 2005, canine interferon-γ was commercialized subsequently.

At that time, baculovirus expression system in silkworm cell lines and the silkworm using recombinant baculovirus vectors had been reported [1-2]. Recombinant BmNPV harboring feline interferon cDNA was constructed using a transfer vector pBM030 [4], in which high expression potency was demonstrated in B. mori cells and silkworm larvae. Feline interferon cDNA was inserted into downstream of polyhedron promoter in pBM030 containing untranslated regions around polyhedron gene, and co-transfected to silkworm cell together with BmNPV DNA. Recombinant BmNPVs were picked up and cloned by repeating limiting dilutions. Two and half million unit/mL of feline interferon was produced in culture supernatant of the recombinant BmNPV–infected silkworm cells. However, this production system was not satisfactory for industrial manufacture, because the cells grew slowly. Therefore, silkworm larvae were used for feline interferon production, and finally the productivity improved 1.2 × 108 unit/mL, which is 100 fold higher than any other production system [13]. The productivity from various expression systems was compared in (Figure 1). 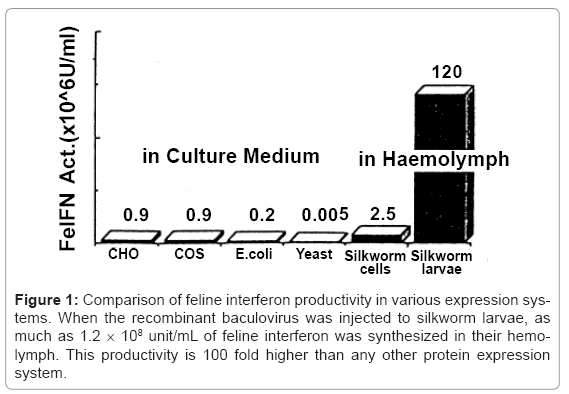 After inactivation of the recombinant virus and proteases with hydrochloric acid, the hemolymph was neutralized and centrifuged. The supernatant was purified by blue Sepharose and copper chelate Sepharose column chromatography. Reverse phase HPLC analysis shows that purified feline interferon has two peaks (Figure 2A). In N-terminal amino acid sequence analysis of the collected peak samples, one peak sample showed a consensus N-terminal amino acid sequence Cys-Asp-Leu-Pro, and the other Leu-Gly-Cys-Asp-Leu-Pro, which had additional two amino acids. As it suggested that the cleavage of signal sequence occurred at two different sites, alternate signal sequence was examined. According to report by Heijne G. von [14], Ser at -3 positions to the signal peptide sequence end was exchanged to Val, and new recombinant BmNPV was constructed. As a result, purified feline interferon from the new recombinant BmNPV–infected silkworm showed a single peak in reverse phase HPLC analysis (Figure 2B) [15]. The productivity of original and new recombinant BmNPVs was 7.7 × 107 and 1.2 × 108 unit/mL hemolymph, respectively. N-terminal sequence of the purified feline interferon from the new recombinant BmNPV was identified to be Cys-Asp-Leu-Pro as expected. But C-terminal sequence was Glu 170 in contradiction to Lys 171, which was expected as per the cDNA sequence. It was possible due to digestion by protease from silkworm or baculovirus, but the cause is not known clearly. 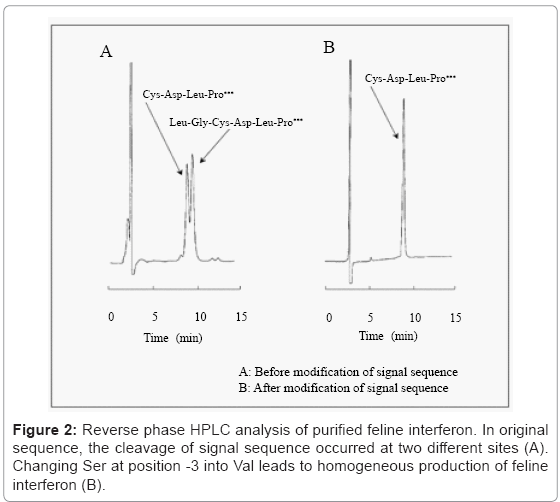 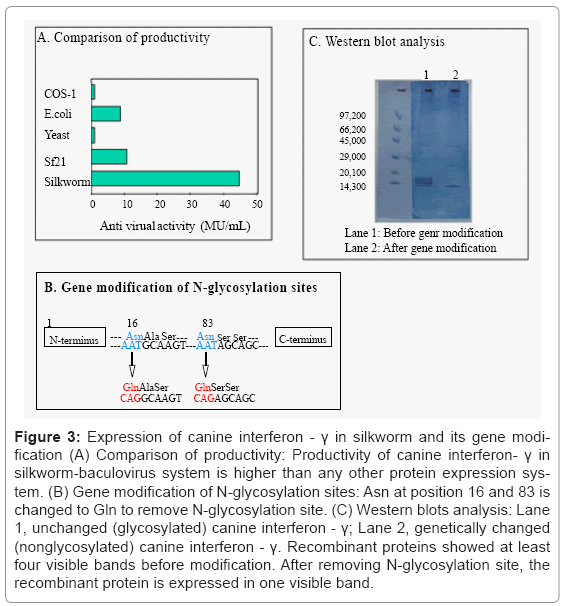 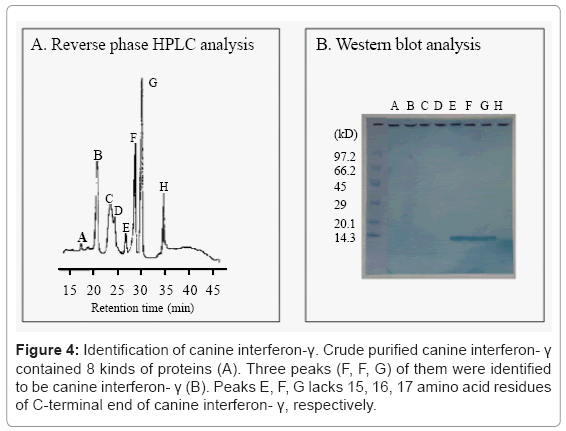 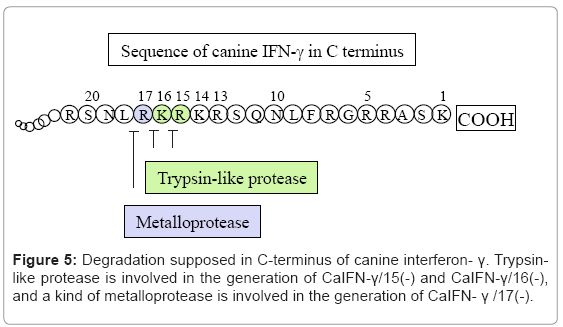 BmNPV codes cysteine protease and the activity is detected in the BmNPV–infected silkworm larval hemolymph [18,19]. However, the cysteine protease may not be involved in the case of canine interferon-γ, because the generation of CaIFN-γ/15(-), CaIFN-γ/16(-), and CaIFN-γ/17(-) is inhibited at pH 4 and stimulated under alkaline condition.

By optimizing the operation of anion-exchange column chromatography, CaIFN-γ/16(-) was purified significantly. From the N-terminal amino acid sequence, signal peptide was cleaved correctly at single site and the purified CaIFN-γ/16(-) had the characteristic bioactivity of canine interferon-γ represented by anti-virus activity, anti-tumor activity against canine neoplastic cells, and facilitation activity of the expression of MHC class II antigen [17]. The specific activity was 9.0 × 107 unit/mg, which is comparable to that of non truncated canine interferon-γ [17].

Feline and canine interferon’s were developed successfully using silkworm expression system. Two kinds of interferons were already approved by European Medicines Agency, Ministry of Agriculture, Forestry and Fisheries of Japan, and others, and commercialized as medicines for companion animals. Feline interferon and canine interferon- γ were approved as a treatment of feline and canine viral diseases in 20 countries, and canine atopic dermatitis in Japan, respectively (Figure 6). In the manufacturing of medicines, a stable supply of products with constant quality is of utmost importance. For this purpose, quality control should be preceded in every step of production, purification, and formulation. A certain type of modified form of objective product is noted as impure substances, but when some of them contain active substance, the content ratio of these modified products must be controlled within the defined level. In our experience, recombinant proteins produced in silkworm had various types of variants due to degradation. In the case of feline interferon, cleavage of signal peptide occurred at two different sites. In the case of canine interferon-γ, the difference of glycosylation and limiting degradation of C-terminal end were identified. Wild-type human interferon-ω1 is cleaved at two different sites in signal peptide sequence [20]. The recombinant human interferon-γ expressed in E. coli or animal cells is degraded at its C-terminal region. These facts show that these differences in modification are partly due to the nature of expressed protein rather than due to the use of silkworm. 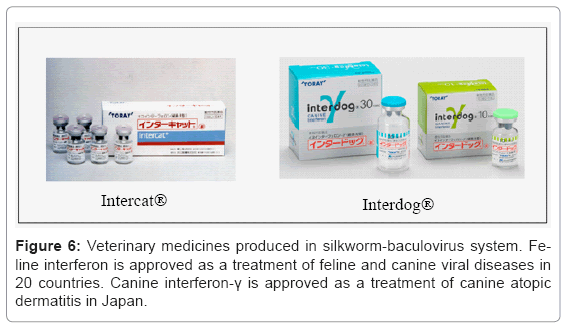