Copyright: © 2011 Rajan LA, et al. This is an open-access article distributed under the terms of the Creative Commons Attribution License, which permits unrestricted use, distribution, and reproduction in any medium, provided the original author and source are credited.

Glycine betaine (N, N, N-trimethylglycine) is a effective compatible solute, which maintains fluidity of membranes and protects the biological structure of the organisms under stress. In this study, betaine aldehyde dehydrogenase (GbsA) and betaine alcohol dehydrogenase (GbsB) genes encoding for glycine betaine biosynthesis were PCR amplified from genomic DNA of Bacillus subtilis isolated from salted anchovies (Thrissina thryssa) collected from retail fish market of Cochin, Kerala, India. The amplified genes were cloned and nucleotide sequences were determined. The sequencing results showed that GbsA and GbsB genes contain ORF of 1473 bp and 1182 bp long, encoding 474 and 266 amino acids respectively (GenBank accession nos. FJ823257 and FJ823258). In silico sequence analysis revealed that the GbsA and GbsB sequences of B. subtilis were conserved in many eubacteria.

Soil microorganisms are subjected to frequent fluctuations in the osmotic conditions of their habitat due to drying and wetting of the soil. Bacteria must have active mechanisms to compete successfully for their ecological niche [1,2]. The more effective defense against these conditions is the accumulation of osmoprotectants, which can be amassed to high intracellular levels without disturbing essential functions of the cell [3]. One of the most important osmoprotectants is glycine betaine [4]. Synthesis of glycine betaine from choline is a two-step oxidation process with glycine betaine aldehyde as the intermediate [5]. Characterization of glycine betaine has been most intensively studied at both the molecular and biochemical levels for E. coli [6]. In E. coli, choline dehydrogenase (betA) oxidizes choline to glycine betaine aldehyde and betaine aldehyde dehydrogenase (betB), converts glycine betaine aldehyde to the osmoprotectant glycine betaine. The choline-glycine betaine synthesis pathway is an important facet in Bacillus subtilis to high osmolarity stress [5]. However, the genetic and biochemical details governing choline uptake and glycine betaine synthesis have remained largely unknown. In this study, for the first instant we report the molecular characterization and in silico sequence analysis of GbsA and GbsB genes in B. subtilis isolated from salted fish. Moreover, the sequence analysis of glycine betaine aldehyde dehydrogenase and glycine betaine alcohol dehydrogenase from our isolate shows several base substitutions with that of reported sequences in GenBank, resulting in the altered amino acid sequences of the translated protein structures. implant [13,14]. Since few reports, to our knowledge, analyze the effects of Trabecular TitaniumT on stem cells [15] and none focuses on the genetic effects, the expression of genes related to the osteoblast differentiation was analyzed using cultures of bone marrow derived human mesenchymal stem cells (BM-hMSCs) treated with Trabecular Titanium T for seven days, in order to detect the early effects of the common part of BMPs on stem cells.

B. subtilis was isolated from salted anchovies procured from local fish markets in Cochin, Kerala, India. Microbial identification and biochemical characterization of B. subtilis was carried out as per [U.S. Food and Drug Administration (USFDA)] methods. B. subtilis was grown aerobically in nutrient broth medium containing 0.5% peptone, 0.1% beef extract, 0.1% yeast extract, 0.5% NaCl and incubated at 37°C. Genomic DNA of B. subtilis was prepared as described by [10].

The amplified DNA fragments of GbsA and GbsB were purified by the use of Perfectprep Gel Cleanup Kit (Eppendorf) and cloned into the cloning vector, pTZ57R/T (MBI Fermentas). The cloned inserts were transformed into E. coli JM109 and plated on LB agar containing ampicillin (100 µg mL-1), IPTG (50 µM) and X-gal (80 µg mL-1). The plates were incubated at 37°C and the transformants were selected and inoculated in 5 mL LB broth containing ampicillin. The recombinant plasmids were isolated from theovernight culture by alkaline lysis method (Sambrook and Russell, 2001) [11].

Characterization of the Recombinant Plasmid

The recombinant plasmid was double digested with restriction enzymes, BamI & XbaI for GbsA and XbaI & HindIII for GbsB. The reaction mixture contained recombinant plasmid 2µL, Enzyme buffer (10X) 2µL, each restriction enzyme (10UµL-1) 0.5µL and volume up to 20mL with autoclaved Millipore water. The reaction mixture was incubated overnight at 37°C in a water bath. The digested products were analyzed on 1.5% agarose gel. The clone with the correct insert as judged by size was sequenced on an ABI PRISM 377 genetic analyzer (Applied Biosystems, Perkin Elmer Co., Foster City, CA, USA).

The nucleotide sequences obtained were compared to the available database sequences by BLAST analysis using the NCBI (http://www. ncbi.nlm.nih.gov) database. The sequences were aligned and clustered using CLUSTAL-X version 1.81 [7]. The output alignments were imported into the GeneDoc program (http://www.psc.edu/biomed/genedoc/) and BioEdit version 7.05 program (www.mbio.ncsu.edu/BioEdit/) to calculate the percent identities among the nucleotide and amino acid sequences. The molecular masses and the theoretical pI values of the polypeptides were predicted using the ProtParam tool (http:// www.expasy.org/tools/protparam.html). 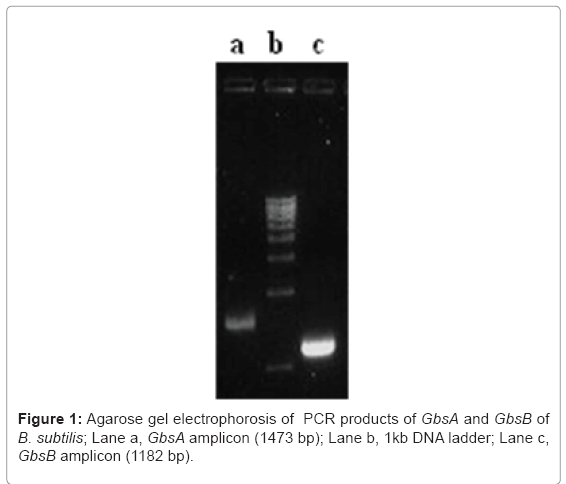 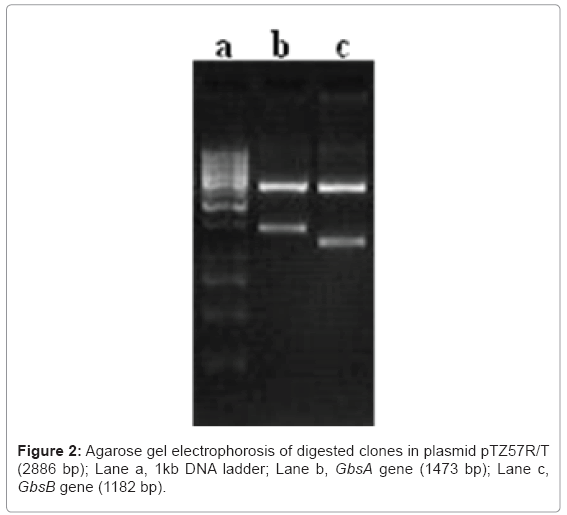 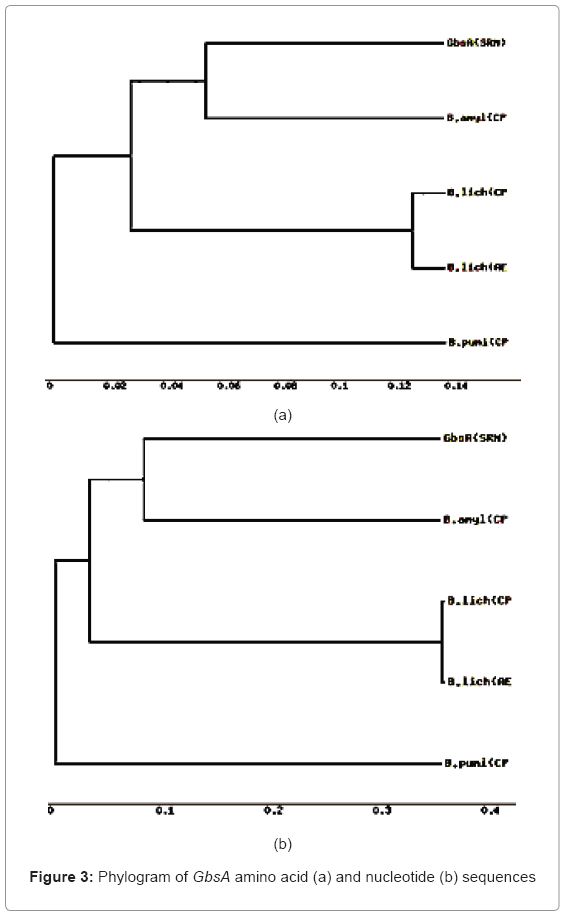 Figure 3: Phylogram of GbsA amino acid (a) and nucleotide (b) sequences 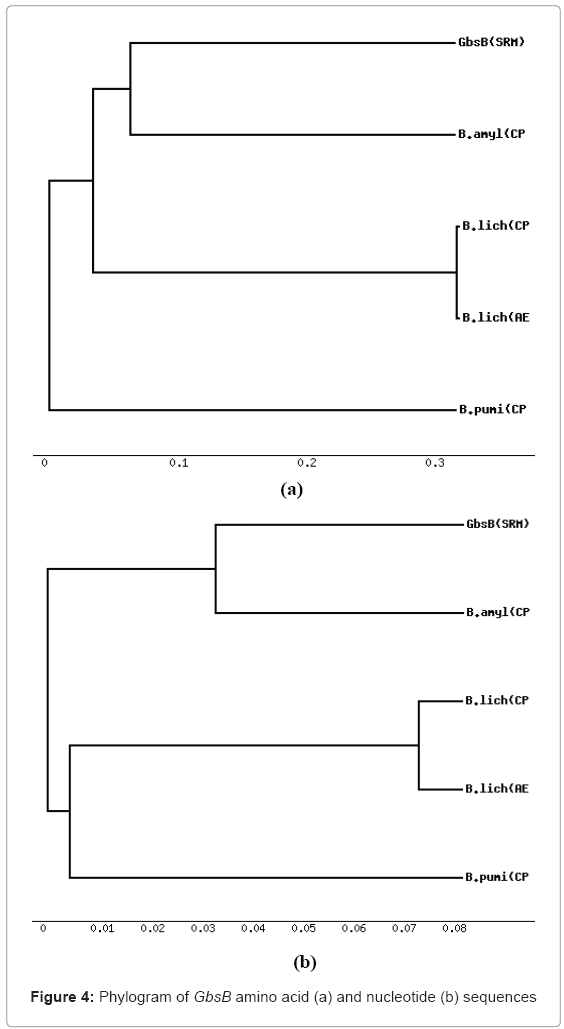 Figure 4: Phylogram of GbsB amino acid (a) and nucleotide (b) sequences

Glycine betaine (N, N, N-trimethylglycine) is a very efficient osmolyte [3] found in a wide range of bacteria and plants [12], where it is accumulated at high cytoplasmic concentrations in response to osmotic stress. In addition to its osmoprotectant activity, glycine betaine is also an effective protectant against mutagenic compounds and radiation-induced damage. Glycine betaine can either be taken up directly from the environment, or can be synthesized. A common biosynthetic pathway for glycine betaine is from choline, utilizing a two - step pathway with betaine aldehyde as intermediate.

In conclusion, to our knowledge, this study represents the first instance in which GbsA and GbsB genes from B. subtilis isolated from salted fish has been cloned and characterized in detail. Moreover, the determination of protein structure modification due to the nucleotide substitutions will certainly provide the basis for performing site-directed mutagenesis to improve the production and configuration of the osmolytes of biotechnological interest.