Copyright: © 2012 Vafaeimanesh J, et al. This is an open-access article distributed under the terms of the Creative Commons Attribution License, which permits unrestricted use, distribution, and reproduction in any medium, provided the original author and source are credited.

Background & study aims: Bacterial infection is accepted as a precipitating factor in gallstone formation and recent studies have revealed the presence of Helicobacter species in the biliary system. The aim is to determine whether bacterial infections could be detected in bile obtained at ERCP and to evaluate the prevalence of these infections in patients with biliary diseases.

Patients & methods: 102 consecutive patients undergoing ERCP for various indications at Tehran Taleghani Hospital were asked to participate in this study. Bile juice was aspirated after selective cannulation of the common bile duct and stored at -20°C. Each of the patient samples had been tested by PCR on 16s rRNA region and RFLP-DGGE for bacterial infections.

Results: Helicobacter DNA was detected by PCR in bile samples 2 out of 74 with gallstone diseases, 1 out of 15 pancreatobiliary malignancies and 1 out of 13 other benign biliary diseases (p=0.582). Direct sequencing confirmed strains of H. pylori in all four bile samples. Bacteria were detected by the amplification of 16s rRNA 43.2% in gallstone diseases, 53.3% in pancreatobiliary malignancies and 53.8% in other benign biliary diseases (p=0.646).

Conclusion: E.coli, Enterococcus, Klebsiella, Pseudomonas, Acinetobacter and H. pylori were found in the biliary system, suggesting that these bacteria are of etiological importance in gallstone formation and other biliary diseases.

Helicobacter pylori (H. pylori) is a Gram-negative, spiral-shaped, motile micro-organism that plays a causative role in the pathogenesis of chronic gastritis, peptic ulcer disease, development of gastric adenocarcinoma and mucosa-associated lymphoid tissue lymphoma in humans. Although H. pylori is recognized as a pathogen associated with gastric lesions, recent studies have revealed the presence of several Helicobacter species in the hepatobiliary system [4-7]. In animals, Helicobacter species have been isolated from sites including the gastrointestinal tract, liver and biliary tree. H. hepaticus and H. bilis have been detected in liver tissue from mice with chronic active hepatitis and hepatocellular cancer [2,3]. Similarly, H. canis has been isolated from the liver of a dog with multifocal necrotizing hepatitis [8].

Kawaguchi et al. [9] demonstrated a microorganism resembling H. pylori in a resected gall-bladder specimen by H. pylori urease B gene and immunohistochemical staining and bile-resistant hepatic Helicobacter species such as H. bilis, H. pullorum, and F. rappini were extracted from gallbladder mucosa and bile juice of patients with chronic cholecystitis, suggesting that these agents may be key elements in the development of various biliary diseases, especially cancer [10]. H. pylori DNA in gallstone was detected by PCR in several reports [11-13]. The discovery of H. pylori in bile juice has led to the suggestion that Helicobacter species are etiological agents in gallstone formation [14-16]. However, one study in Germany reported no association of Helicobacter species with gallstone formation suggesting possible regional and ethical differences [17].

The16s rRNA is the most conserved (least variable) gene in all cells. Portions of the rDNA sequence from distantly-related organisms are remarkably similar. This means that sequences from distantly related organisms can be precisely aligned, making the true differences easy to measure. For this reason, genes that encode the rRNA (rDNA) have been used extensively to determine taxonomy, phylogeny and to estimate rates of species divergence among bacteria [18].

The aim of this study was to determine the frequency of bacterial infection using PCR and DNA sequencing in bile obtained from endoscopic retrograde cholangiopancreatography (ERCP) and the evaluation of the potential pathogenic role of Helicobacter species in biliary diseases in Iranian patients.

102 consecutive patients (≥18 years) undergoing ERCP for various indications at Tehran Taleghani Hospital were asked to participate in this study from March 2010 to September 2011. Subjects were excluded if they were taking antibiotics during the previous four weeks. Patients with history of recent pancreato-biliary infections (≤6 months), renal and hepatic impairment were not enrolled. All patients signed an informed consent form. This research was approved by the Ethical Committee of Research Center for Gastroenterology and Liver Disease in Shahid Beheshti University of Medical Sciences.

Patient demographics and diagnoses were recorded and bile was collected by aseptic aspiration after selective cannulation of the common bile duct. Bile samples stored at -20°C and each of the patient samples will be tested by 16s rRNA universal and specific PCR for bacterial identification. The frequencies of 16s rRNA will be confirmed by sequencing and identification of the bacterial genus will be determined by RFLP-DGGE (Restriction Fragment Length Polymorphism & Denaturing Gradient Gel Electrophoresis).

1 mL of each bile samples was pelleted by centrifugation for 15 minutes at 14,000 rpm. Then DNA was extracted with phenolchloroform. To amplify DNA of eubacteria and Helicobacter species from the bile samples, the PCR method was used. To obtain higher amounts of DNA, the products were re-amplified with nested PCR primers (Tables 1, 2). Primer set 27F/1492R was used in separate reactions to amplify extracted rRNA genes. The PCR products were denatured at 94°C for 5 minutes, elongated at 30 cycles of 94°C for 30 seconds and 56°C for 30 seconds; and a final extension of 72°C for 10 minutes.

Final nested PCR products were electrophoretically separated in a 1% agarose gel, then the DNA band from the agarose gel was cut by Sma I (from Serratia marcescens S) enzyme (Roche, Germany) and stained with ethidium bromide. Resulting sequences were compared to databases accessed through the NCBI (National Center for Biotechnology Information) server.

Statistical analysis was performed with Chi-square test as well as Fisher’s exact test, and one-way analysis of variance (ANOVA) test. P values of 0.05 or less were considered statistically significant. All the data were analyzed using SPSS 16 for Windows (SPSS Inc., Chicago, IL, USA) and the values were expressed as mean ± standard deviation (SD) for continuous variables and percentages for categorical variables.

One hundred and two patients were included in this study. Fiftytwo patients (50.98%) were female, and the age ranged from 18 to 92 years (mean, 59.5 ± 16.6 years). The diagnoses of these patients are listed in Table 3. We divided the patients in 3 groups based on diagnosis; Group A: 74 patients (72.6%) with stones including CBD (Common Bile Duct) stones only, Gallbladder and CBD stones and microlithiasis. Group B: 15 patients (14.7%) with malignancy including cholangiocarcinoma, ampullary carcinoma, pancreatic carcinoma and duodenal adenocarcinoma. Group C: 13 patients (12.7%) with other benign diseases including SOD (Sphincter of Oddi Dysfunction) and PSC (Primary Sclerosing Cholangitis). There were no statistical differences among the study groups in age, gender and body mass index (BMI) (Table 3).

Table 3: Diagnoses and characteristics of study subjects in different groups.

Bacterial DNA was detected in 47 (46.1%) of 102 samples of bile juice by PCR assay (Figure 1). Additional PCR assays were done on the 47 positive bacterial DNA bile samples using Helicobacter genusspecific primers. Four samples had positive PCR for Helicobacter species (Figure 2). Helicobacter pylori-specific primer pairs HPF and HPR were used to identify H. pylori by PCR, and generate amplicons of approximately 296 bases for H. pylori ureC genes (glm region) in 4 samples positive for Helicobacter 16S rRNA (Figure 3). All of them (4 of 4) were positive for H. pylori ureC genes (glm). For detection of different bacterial isolates, molecular typing with RFLP-DGGE method was done in 47 positive bile samples for bacterial DNA (Figure 4) and 51 bacterial isolates were found in 47 positive samples (Table 4), including E.coli (20.6%), Enterococcus (11.7), Klebsiella (9.8%), Pseudomonas (9.8%), Acinetobacter (3.9%) and H. Pylori(3.9%). There was no difference in the identification of bacterial DNA and Helicobacter species among the groups based on diagnoses (Table 4). 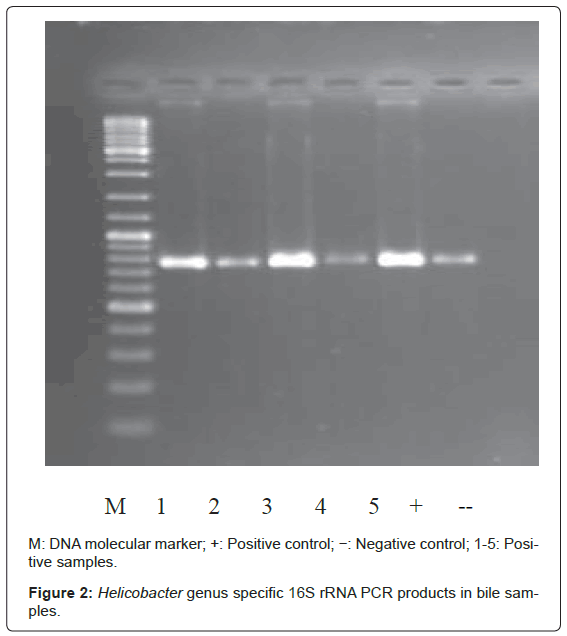 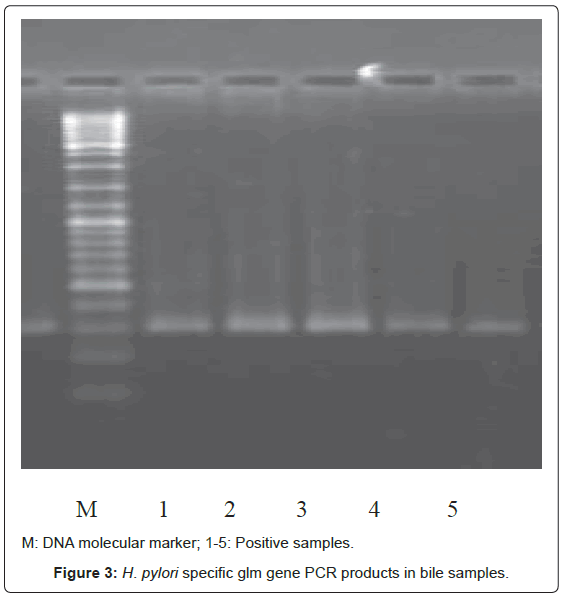 Table 4: Bacterial isolates among the groups based on diagnoses.

Table 5: Bacterial isolates among the groups based on gallstone composition.

The biliary system is thought to be sterile but this sterility could be broken under certain conditions. Two major routes of infection are ascending through the sphincter of Oddi and descending through the portal system [19,20]. For example, bacterial infection was found in bile (20%) and the liver (17%) on post-operative individuals without any hepato-biliary abnormalities. Also, patients underwent non-biliary abdominal surgery had a 32% positive rate of bacterial infection in their portal blood [21,22]. Leung et al. [23] found bacteria in 84% of the inner cut surface of the pigmented gallstones using electron microscopy but not cholesterol stones.

Lee et al. [1] extracted bacterial DNA from the specimens of gallstones, bile juice and Gall-bladder (GB) mucosa at cholecystectomy. Bacterial DNA was positive in 69.4% of the mixed cholesterol stones compared with 10% of pure cholesterol stones. Helicobacter DNA was detected in 4 out of 58 gallstones, 6 out of 48 bile samples and 5 out of 46 gallbladder specimens. Almost all mixed-cholesterol gallstones appear to harbor bacterial DNA, predominantly E. coli and identified the DNA of Helicobacter species in 27.7% of the GB mucosa, 25% of the bile juice, and 11.4% of the gallstones.

Similarly, in our study, we extracted bacterial DNA from the specimens of bile juice samples %43.2 in stone group, %53.3 in malignant group and %53.8 in other benign group including E.coli (20.6%), Enterococcus (11.7%), Klebsiella (9.8%), Pseudomonas (9.8%), Acinetobacter (3.9%) and H. Pylori (3.9%) without any difference in the identification of bacterial DNA and Helicobacter species among the groups based on diagnoses. The exact mechanism by which bacterial infections contribute to cholesterol gallstones is not known, bacterial biofilm is suggested to play a role as a nucleation factor in cholesterol gallstone formation, like a mucin. Other causative factors are changes of bile composition and bacterial phospholipase, excessive mucin production of Gall-bladder epithelial cells triggered by bacterial lipopolysaccharides [1].

More than 25 species of Helicobacter have been found and these microorganisms have been caused various diseases of the stomach, intestine and the liver in mammals. Hepatitis and hepatomas are caused by H. hepaticus in mice [24-26]. H. pulorum, Flexispira rappini, and H.canis are isolated in diarrheal patients, showing the possibility of zoonosis [27]. H. pylori is sensitive to bile acid and it is difficult to grow in bile juice but the extraction of bile-resistant Helicobacter species from animals bile showed that F. rappini, H. hepaticus, H. bilis, H. canis, H. cholecystus, and H. pullorum may be able to grow and survive in bile juice [21].

In study of Fallone et al. [7] bile juice was collected from 125 patients with various hepato-biliary diseases (75 with biliary stones, 15 with pancreatico-biliary malignancies and 4 with primary sclerosing cholangitis) undergoing ERCP. All bile samples of 122 patients with hepato-biliary diseases were negative for Helicobacter DNA. In a similar German study no Helicobacter species were found in bile juice, suggesting that there may be racial and demographic differences [17].

Nilsson et al. [31] have also studied the relationship between H. pylori and primary biliary cirrhosis and primary biliary sclerosing cholangitis. H. pylori was found in the liver tissue but H. bilis, H. pullorum and H. hepaticus was not [31]. In our study, we found the H. pylori from only one of five samples in the patients with PSC.

In summary, RFLP-DGGE is very accurate method but there are many limitations to identify all the organisms in cases of infection with multiple Helicobacter subtypes. Although disadvantage of lack of comparative healthy control group, we could identify bacteria including E.coli, Enterococcus, Klebsiella, Pseudomonas, Acinetobacter and H. pylori in bile juice samples of Iranian patients with biliary diseases. It may be a just innocent bystander, but bacterial infection is of etiological importance in benign and malignant biliary diseases. In future, researches will be needed to show the route of H. pylori infection in biliary diseases and the effect of bacterial eradication on the development of these diseases.

The study was supported by the Shahid Beheshti University of Medical Sciences. We wish to thank all the researchers who took part in this research project.