Copyright: © 2012 Pan D. This is an open-access article distributed under the terms of the Creative Commons Attribution License, which permits unrestricted use, distribution, and reproduction in any medium, provided the original author and source are credited.

Noninvasive MR molecular imaging and targeted drug delivery systems, often referred to as theranostic agents, are being developed to enable improved detection, patient risk stratification, site-specific treatment and longitudinal monitoring [1]. Gadolinium (Gd), a paramagnetic lanthanide has been the dominant metal for T1 weighted MR contrast agents to produce bright signal in vivo. With seven unpaired electron (+3 oxidation state) in the outer d-orbital, it strongly influences the T1 relaxation times of the soft, biological tissues to which the metal has access. Gd exhibits a tendency to alter signal intensities by shortening the T1 time in its surroundings. The efficacy is measured by the relaxivity, which is dependent on the chemical properties of the metal, typically as a coordinated complex. Gadolinium is toxic in its free form [2]. The free ion (i.e. chloride, sulfate, or acetate form) has inadequate solubility in water in the neutral pH range, and is poorly tolerated in vivo. However in the clinics it is routinely administered in a chelated (linear or macrocylics) form such as DTPA or DOTA, still maintaining the strong relaxivity [3]. By far, in terms of their chemical properties, Gd is superior in comparison to the other paramagnetic metals e.g. manganese (Mn) and copper (Cu). Despite the long history of Gd blood pool contrast agents [4] and the preclinical success of nanotechnology platforms [5] based on this metal, the recent discovery of nephrogenic systemic fibrosis (NSF) has raised concern on currently approved MR contrast agents [6]. NSF is a serious and unexpected side effect of gadolinium blood pool agents observed in some patients with renal disease or following liver transplant [7]. It was first identified in 1997 in the US when a small group of renal transplant patients were found to have developed complications such as joint contractures, brawny in duration and hyper pigmentation of the skin in their extremities. The disease was initially referred to as ‘nephrogenic fibrosing dermopathy’; however, the close connection of visceral led to the name ‘nephrogenic systemic fibrosis’. Interestingly, all affected individuals were observed to have chronic kidney disease. Later, its association with Gd was clinically observed by Grobner et al. [8] and subsequently by others [9,10] (Figure 1). Patients with NSF develop thickening of the skin and connective tissues that can inhibit arm and leg movements and even lead to bone fractures. Approximately 5% of patients experience a rapidly progressive course, which may result in death due to widespread fibrosis [11]. The cause of NSF is unknown, and there is no effective treatment of this condition. All these findings prompted the FDA to issue a boxed warning of gadolinium blood pool agents specifying that gadolinium based contrast agents (GBCAs) increase the risk for NSF in patients with: 1) acute or chronic, severe renal insufficiency (glomerular filtration rate <30 mL/min/1.73m2), 2) acute renal insufficiency of any severity due to the hepato-renal syndrome, or 3) in the perioperative liver transplantation period [12]. Although dialysis of patients may be considered promptly following GBCA administration, there is no evidence that hemodialysis prevents NSF. Linear chelates (e.g. Omniscan®, Magnevist® and OptiMARK®) are the most commonly reported agents differentiating them from macrocyclic molecules. In terms of the kinetic, thermodynamic, conditional stability as well as their tendency for transmetallation with zinc and other cations, macrocyclic chelates are superior to the linear forms [13]. 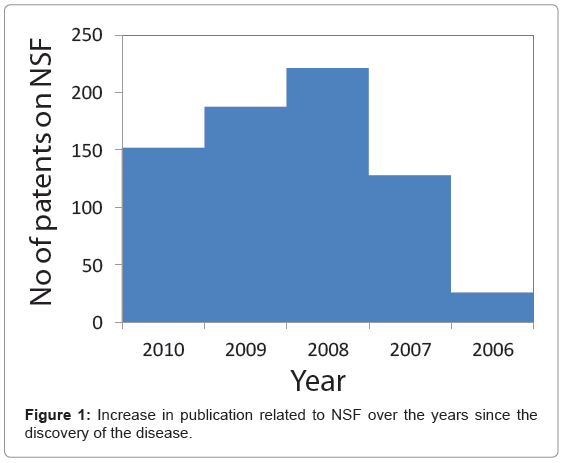 Figure 1: Increase in publication related to NSF over the years since the discovery of the disease.

Myriad of advancement has been made to create targeted nanoagents carrying high payload of paramagnetic Gd to characterize tissues based on the presence of pathognomonic biosignatures [14]. Some of these examples include e.g. metal chelates bearing liposomal vesicles [15] and lipoprotein micelles; [16] ανβ3-targeted paramagnetic polymerized liposome [17] and perfluorocarbon (PFC) nanoparticles; [18] paramagnetic micelles for macrophage imaging within atherosclerotic plaque [19] etc.

With the recent finding of NSF and its linking with Gd has raised concern over the safety of lanthanide based contrast agents? Manganese (Mn) is another paramagnetic metal that has been historically used as a T1 weighted MR contrast agent [20]. In fact Mn was among the first agents that was considered as MR contrast agent due to its favorable electronic configuration (five unpaired electron in bivalent state) and enriched biochemical features. However, this metal is known for its toxicity when administered in free ionic form and therefore needs to be “masked” before inject to in vivo [21]. Manganese chelates, e.g. Mn- DPDP (Teslascan™), prevent the early release of the metal has been successfully used in the clinic for the detecting liver lesions [22]. So far, it is the only FDA approved manganese contrast agent. Manganese-based contrast agents are now gaining tremendous attention, which is clearly evident from an increase in publications related to this topic (Figure 2). New strategies are surfacing with the objective to achieve high MR contrast. Towards this aim, it can be realized that Mn in the form of nanoparticles may reduce the threat of free metal based toxicities by inhibiting the premature loss of the free metal. Numerous strategies are now available which includes organic [23] and/or polymeric, i.e. denditric [24], inorganic [25] and hybrid [25] types. Liposomes have been classically used to encapsulate MnCl2, [26] however; they lack in vivo stability due to the leakage and fusion of the entrapped metal from the uni- or multi-lamellar particles [27]. There has been a constant surge of publications on inorganic “hard” type crystalline (and coated) manganese oxide based materials. [28-30] clearly, these systems offer exceptional contrast and targeting potential in vivo. However, hard particles may not be well tolerated in vivo and their overall clearance mechanism needs to be investigated in greater depth. “Soft” particles are typically represented by polymeric and lipid-based nanoparticles [31-35]. Dendrimers exemplify defined, macromolecular architectures with high safety profiles. However, large scale production of dendrimers (e.g. generation 5) in pure form can be challenging and may require advanced skills. Also, their ability to target sparse epitopes (e.g. angiogenic markers) is mostly uninvestigated. 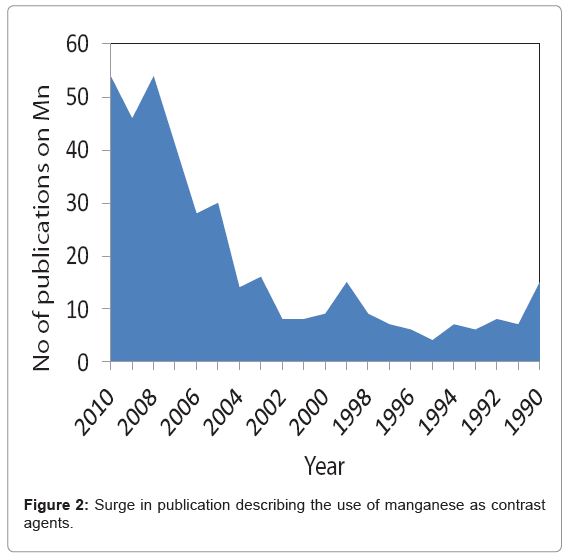 Figure 2: Surge in publication describing the use of manganese as contrast agents. 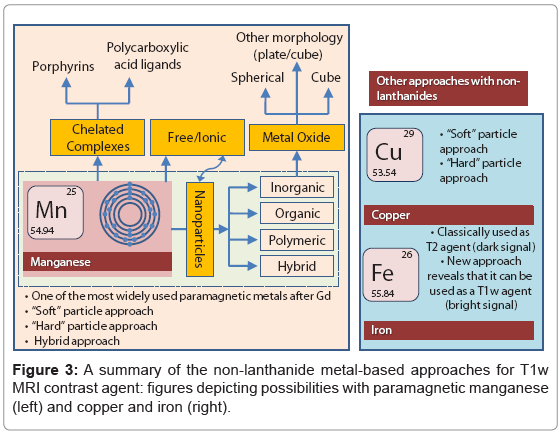 Some of the exciting examples of non-lanthanide based T1-weighted MR contrast agents include the novel use of magnetite iron oxide nanoparticles in a phospholipids stabilized suspension of colloidal system. Iron oxide particles have long been used as a T2 (dark signal enhancing) weighted agent. However, this unique strategy provides bright T1-weighted MR signal and overcomes the usual drawbacks of classically used iron oxide based agents i.e. susceptibility artifacts and long circulatory back ground signal (>24h) [36].

Of late, materials scientists have turned their attention in exploiting the paramagnetic behavior of Copper (Cu). Although this metal is not entirely free from the concern of toxicity, in general it is well tolerated in humans. Two approaches related to the use of Cu as MR contrast agents came out very recently. One of the works used an inorganic strategy by developing Au3Cu1 mixed metal nanoparticles [37]. The other strategy used a “soft” particle approach to produce a micro fluidized suspension of Cu-oleate stabilized by phospholipids [38].

Therefore, we might ask; how can the materials scientist take advantage of this knowledge and play a bigger role? Usually, the “soft” type particles are more compliant and have a better safety profile in comparison to their “hard” type counterpart (e.g. inorganic crystalline). However, for contrast agents for MRI (and other modalities e.g. computed tomography) the importance of metal (Mn [39,40], Cu, Fe and others) is unquestionable. Therefore, as we move forward, more and more new strategies will evolve to “package” these metallic agents into a biocompatible nano carrier with defined structural features and improved in vivo clearance properties. Clearly, there are massive opportunities exists in this area and as we move forward, materials scientist will play a pivotal role to define the scopes for developing “safer”, efficacious agents.