Copyright: © 2017 Abdulghaffara W, et al. This is an open-access article distributed under the terms of the Creative Commons Attribution License, which permits unrestricted use, distribution, and reproduction in any medium, provided the original author and source are credited.

Objective: To evaluate the role of DWI and ADC in differentiating benign from malignant hepaticmasses

Conclusion: DWI is an easy technique to obtain and to be evaluated. ADC values can differentiate benign from malignant liver masses with high sensitivity and specificity.

The incidence of discovering hepatic focal lesions during routine radiological examination parallels growth in imaging utilization. Most of the hepatic focal lesions arising in non-cirrhotic livers are benign. Hemangiomas, focal nodular hyperplasia, and adenomas are the most common solid benign lesions [1,2]. The most common malignant lesions in non-cirrhotic livers are metastases. The incidence of hepatocellular carcinoma and intra-hepatic cholangiocarcinoma is more noted on top of chronic liver diseases. Regarding benign lesions; maximizing specificity and accuracy of cross-sectional imaging of these lesions is paramount in avoiding unnecessary biopsies, which may lead to a post-procedural morbidity of 2.0% to 4.8% and mortality of 0.05% [3,4].

Ultrasound, Computed Tomography (CT), and magnetic resonance imaging (MRI) are the main liver imaging modalities. Comparing contrast-enhanced ultrasound, CT, and MRI in evaluating incidental focal liver lesions, most of the published series reported similar diagnostic performance with specificities ranging from 82-89% and no significant difference in the summary characteristic between modalities [4,5].

Over the last few years, several studies have investigated the role of DWI in the detection of focal liver lesions. DWI is superior to T2-weighted sequences [6-9] and to super paramagnetic iron oxide enhanced MR imaging in the detection and characterization of hepatic focal lesions [10]. The detection of small focal lesions seems to be significantly improved by DWI [6,8,10]. High SNRs and high lesion-to- liver signal intensity ratios are seen at low b values alleviating the depiction of focal liver lesions. In addition, the ‘black blood effect’ of diffusion-weighted images makes it easier to distinguish small focal hepatic lesions from intra-hepatic vessels. Furthermore, DWI seems to improve the perceptibility of focal hepatic lesions, especially of hepatocellular carcinomas (HCCs) in patients with liver cirrhosis as the heterogenecity and increased signal intensity of the cirrhotic liver parenchyma as a result of nodular regeneration, fibrosis, and scarring appears became less pronounced on DWI compared to T2-weighted images [11].

The differential diagnosis of malignant and benign focal hepatic lesions remains a diagnostic challenge; however, to improve the diagnosis of these lesions, new methods for existing modalities, such as MRI, CT, angiography, and ultrasonography are being developed. Recently, some studies have reported that the Apparent Diffusion Coefficient (ADC), which is one of calculated parameters of DWI, might be useful in differentiating benign and malignant lesions in the liver [12].

The diffusion coefficient is related to the molecular mobility of water molecules so reflects tissue properties, such as the size of the extracellular space (i.e., the rate of relatively unhindered moving water protons), viscosity and cellularity [13]. Therefore, determination of diffusion coefficients has been shown to be helpful for the characterization of focal and diffuse diseases of the liver [14,15].

The aim of our study was to assess the role of DWI and the ADC in differentiating between benign and malignant hepatic masses.

Between February 2011 and June 2013, Forty-one patients (25 males and 16 females with age range, 21–67 years; mean age, 49 years) with focal hepatic masses were included in our study. We apply our study on all patients referred to our department for MRI of the liver at the period of the study. Patients were imaged using conventional MRI, DWI and triphasic-MRI before biopsy of liver masses. Written informed consent was obtained from all patients before MRI.

Diffusion-weighted MR imaging was performed before dynamic imaging, using a single-shot spin-echo Echo Planar Imaging (EPI) sequence with the b factors of 50, 400, and 800 s/mm2 along the three orthogonal directions.

Acquisition time for the entire liver using the three different b factors was about 3.0 min. The parallel imaging algorithms (GRAPPA), with an acceleration factor of 2, were added to reduce the acquisition time. Spectral fat saturation was employed systematically to suppress the chemical-shift artifacts. ADC maps regarding isotropic images were automatically acquired and all mean ADCs of the lesions were measured on those maps.

After determination of the optimal timing for the arterial phase imaging, using the timing bolus technique, dynamic contrast-enhanced imaging was obtained after the administration of a bolus injection of the gadopentetatedimeglumine (0.1 mmol/kg of Magnevist), at a rate of 2 mL/s.

A dynamic series consisted of one pre-contrast series, followed by three successive post-contrast series, including an early arterial, late arterial, and portal phase imaging, at 31 s intervals (17 s for image acquisition with breath-holding and 14 s for re-breathing), at the start of each phase imaging followed by a 5-min delayed phase imaging. Triphasic MRI was done in 38 patients and was contraindicated in 3 patients with renal failure on haemodialysis and GFR less than 30 ml/ min.

Benign appearing focal lesions were subjected to follow up for 2 years to assess the stability of the size and appearance of the lesions (after 6 months then after 1 years for cysts and more setting after 2 years follow up for haemangioma).

Biopsy was done for malignant appearing lesions and correlated with the MRI findings. Diffusion describes the random (Brownian) motion of water molecules. With a very strong bipolar gradient pulse inserted into either a spin-echo pulse sequence (i.e., Stejskal-Tanner technique) or a gradient echo pulse sequence, MR imaging can be sensitive to the diffusion of water molecules in the tissue [16]. Diffusion restriction increases in highly cellular tissues and decreases in low cellular tissues with large extracellular space or with broken-down cellular membranes [17].

In our study, there is a significant difference in the ADC values between malignant (HCC and metastasis) hepatic masses and benign (cysts and hemangiomas) hepatic masses with low ADC in malignant masses and high ADC value in benign masses (Figure 6). The result of our study is in agreement with other studies had been published concerning the diffusion properties of focal hepatic lesions. Most of the studies revealed that ADC values of benign lesions (cysts and hemangiomas) were significantly higher than those of malignant lesions attributed to high cellularity of malignant masses [14,18,19]. 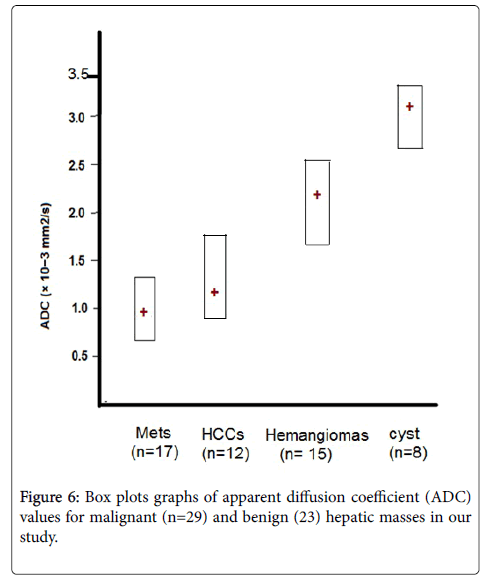 Differences in cellularity between benign and malignant liver lesions resulting in different diffusion properties of water protons within these lesions are reflected by different ADC values measured by DWI. Typically, benign liver lesions like cysts or hemangiomas that are hypocellular compared to liver parenchyma allow relatively unhindered diffusion of water protons resulting in high ADC values (~2 × 10–3 mm2/s in hemangiomas, and ~3 × 10–3 mm2/s in cysts) compared to low ADC values in hypercellular malignant liver lesions such as metastases or HCCs (1.1–1.3 × 10–3 mm2/s in HCCs and 1.1– 1.4 × 10–3 mm2/s in metastases) where diffusion of water protons is more restricted [9]. A published study noticed significant difference between ADCs of benign and malignant lesions (2.45 ± 0.96 × 10-3 and 1.08 ± 0.50 × 10-3 mm2/s respectively). The mean ± SD ADCs (×10-3 mm2/s) of the different groups of lesions were: metastases 0.94 ± 0.60, hepatocellular carcinomas 1.33 ± 0.13, hemangiomas 2.95 ± 0.67 and cysts 3.63 ± 0.56 [14].

ADCs tend to be larger when using small b-values, because the signal attenuation due to diffusion plays only a minor role in that case, and ADC values are contaminated by micro-perfusion. When higher b-values are used, ADCs tend to decrease, in relation with less perfusion contamination. Also, the ADC measurements of benign and malignant hepatic masses were significantly different, which supports similar previous findings with cysts and hemangiomas had the highest ADC values while malignant masses had the lowest ADC values [21-24]. In the liver, b values of 0 and 500–600 s/mm2 are typically used. Although at least two b values are required for diffusion-weighted imaging analysis, the application of a greater number of b values will improve the accuracy of the calculated ADC. The disadvantage of using multiple high b values is an associated increase in scanning time [25,26].

Quantitative measurement of ADC has been shown to be an indicator of malignancy in focal liver lesions, with a reduction in mean ADC (low signal intensity on an ADC map) of malignant lesions compared with benign lesions [9]. Bruegel et al. [9] reported that an ADC threshold of 1.63 × 10-3 mm2/sec could be used to correctly characterize 88% of lesions as either benign or malignant. Other study using a threshold ADC value of 1.5 × 10-3 mm2/s was able to differentiate benign from malignant lesions with 84% sensitivity and 89% specificity. Potential limitations will include necrotic and cystic metastases, where ADC might be elevated, and the diagnosis will then rely on post-contrast images [14].

In our study, we avoid to measure ADC in necrotic parts of the mixed tumor and depending only in measurement of solid component of mixed hepatic masses. A cut-off point of ADC value of 1.65 × 10-3 mm2/s was able to differentiate between malignant and benign hepatic masses with 96.6 % sensitivity, 95.7% specificity, and total accuracy of about 96.2 %.

In conclusion, DWI is easy to obtain and easy to evaluate, and ADC values can differentiate between benign and malignant liver masses with high sensitivity and specificity 96.6% and 95.7%, respectively. DWI is problem solving sequence in patients with contraindications to contrast media. We recommend addition of DWI sequence to the standard MRI examination of the liver before contrast study and according to the result of our study it is a promising sequence. However, more studies with more variants of hepatic focal lesions are needed for more evaluation of DWI in characterization of hepatic masses. 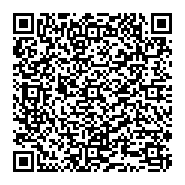