Myoepithelioma was first described in 1943 but was not included in WHO classification (1972) due to lack of established literature, since then only 100 cases have been described [1]. Traditionally only the solid tumors with spindle or plasmocytoid cells were included in myoepithelioma, but with ultra-structural and phenotypical variations that neoplastic myoepithelial cells of salivary glands showed, the definition has expanded. Precise criteria for classification of myoepitheliomas still remain controversial [3]. Among all myoepitheliomas of major salivary gland 50% arise from the parotid, 33% from the sublingual gland and 13% from the submandibular gland [4]. The tumour varies in its presentation from benign [5] to malignant [6] and also potentially malignant [7].

Myopeithelioma of parotid presenting in the post auricular region has not been reported in the wide review of the literature. Myoepithelioma and chronic suppurative otitis media presenting in the same patient has not been reported till date. The variation in presentation and diagnostic dilemma over such salivary gland tumours calls for due attention and proper work up before surgery.

A 65 year old male presented with history of progressive swelling in the left post aural region with painful discharging left ear for the past one year. On examination patient had firm to hard lobulated swelling 4 × 8 cm in the left mastoid region extending superiorly from left supra temporal line to angle of mandible inferiorly and lateral one-third of occipital nuchal lines posteriorly to post auricular groove anteriorly. Left external auditory canal was obliterated with copious foul smelling discharge blocking the view of tympanic membrane (Figures 1 and 2). Computed tomography with contrast revealed a well-defined heterogeneously enhancing mass lesion extending from left post auricular region inferiorly up to C2 vertebra level with multiple feeding vessels. Since the chances of tumour being a vascular malformation could not be ruled out, a FNAC was deferred and an ultrasound Doppler was done. Doppler showed a highly vascular tumour with a direct drainage to internal jugular vein and feeding vessels from superficial temporal artery, post auricular artery and occipital artery. Anaesthetic fitness was obtained and we performed an excision biopsy (Figures 3 and 4). 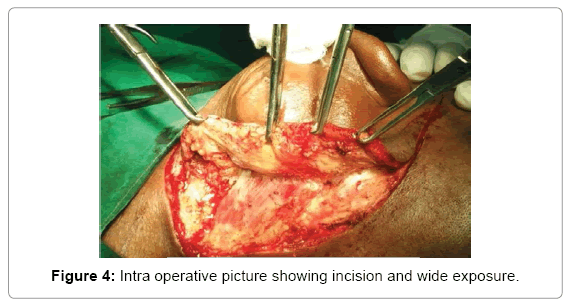 An operating Oto-microscope was used. The size and position of the tumour warranted a wider incision like Fisch approach. This exposure was needed to gain control of the feeders. Bipolar cautery was used for dissection along with cold steel instruments. Flap was raised with monopolar cautery. Tumour dissected of the attachments. Feeders were taken under control with ligature.

The tumour was removed in toto along with tail of Left parotid gland. Facial nerve was traced and preserved. Once tumour was removed the temporal cortex was exposed for treating chronic suppurative otitis media. The external auditory canal and tympanic membrane had granulations secondary to ear discharge, standard cortical mastoidectomy and tympanoplasty was performed. Peri and post-operative period was uneventful. Facial nerve was anatomically and functionally intact post operatively (Figures 5 and 6). Histopathology of the tumour was reported as a well-circumscribed lesion benign myoepithelioma of parotid. Immunohistochemistry revealed S100 positivity which helped us clinch the pathological diagnosis (Figure 7). Benign myoepithelioma of the parotid presenting with ear complaints and post aural swelling masquerades the actual disease in this particular patient. Benign myoepitheliomas are not uncommon tumours of parotid. Patient had two separate entities i.e. benign myoepithelioma of the left parotid gland and left side chronic suppurative otitis media with granulations along with a discharging ear. Both the diseases were dealt in same sitting considering the etiopathology of the diseases are entirely different. An operating otomicroscope was used throughout the procedure, which gave distinct advantage of determining the tumour plane and hence better dissection. Individual feeding vessels were identified and ligated.

The age of patients are usually in the range of 9-85 years, most commonly seen in the third decade according to one particular study [8]. Our patient was aged 65 years at the time of initial presentation.

According to a well-documented series, benign myoepitheliomas are less prone to recurrence than pleomorphic adenomas, which tend to have a higher recurrence rate.

One of the recommended treatment protocols for management of myoepithelioma, both benign and malignant is complete surgical excision. A lobectomy is indicated, when the mass occurs in the parotid gland [4]. Treatment should be designed as for a benign salivary gland tumour with a margin of normal uninvolved tissue being included within the surgical excision [9]. It is because a benign myoepithelioma can undergo malignant transformation, especially in longstanding tumours or in tumours exhibiting multiple recurrences, it is imperative that a careful follow-up schedule is provided to the patient. Our patient was followed up for 4 months with no evidence of recurrence.

In one of the studies most myoepitheliomas were located in the superficial lobe and abutted the capsule of the parotid gland. Whereas, this particular patient presented with a tumour bulk from the tail of parotid and growing in the post aural region. More over the patient also had concomitant ear disease, which becomes a diagnostic dilemma to the surgeon.

Computed tomographic analysis of the tumour shows well differentiated margins in 90% of cases [10] and so is our patient. And also 80% of the patients had inhomogeneous enhancement [10] as did our patient. From what was understood in a study the imaging findings of myoepithelioma are highly nonspecific, so differential diagnosis with most benign and low grade malignant lesions are very difficult. Thus, the most important differential diagnoses for myoepithelioma of the parotid gland include pleomorphic adenoma, Warthin tumour, basal cell adenoma, and low-grade malignant tumor [8]. Since pleomorphic adenoma of salivary gland tumours have rich myoepithelial cells they are now considered in the middle of spectrum, which has myoepithelioma on one end and basal cell adenoma on the other end [2].

To conclude, the varied presentation of salivary gland tumours makes treating such diseases very challenging. Follow up schedule is essential in all such cases.

Copyright: © 2018 Ramalingam V. This is an open-access article distributed under the terms of the Creative Commons Attribution License, which permits unrestricted use, distribution, and reproduction in any medium, provided the original author and source are credited.