Tyrosinase is a natural enzyme and mainly catalyses the o-hydroxylation of monophenols into their corresponding o-diphenols. The synthesis of o-diphenols is a potentially valuable catalytic ability and thus tyrosinase has attracted a lot of attention with respect to industrial applications. In environmental technology, it is used for the detoxification of phenol-containing wastewaters and contaminated soils and also used in cosmetic and food industries as important catalytic enzyme. Phenols are present in effluents of a number of industries such as coal conversion, resins, plastic, petroleum refining, textiles, dyes and organic chemicals. Conventional processes for removal of phenols have drawbacks of incomplete removal of phenols. Hence, an alternative based on enzymes has been investigated. This review summarizes the current research based on removal of phenol from waste streams by enzyme polyphenoloxidase (tyrosinase).

Phenolic compounds are mainly found in wastewater of many industries such as coal conversion, resin, plastic and petroleum refineries. These compounds are toxic pollutants in industrial waste imposing risk to human health and some of them are suspected carcinogens. Phenols and cresols are highly corrosive and toxic, cause, damage to the respiratory, scarring of the skin damage to gastrointestinal tracts, kidney failure, hematological changes and nervous system depression [1,2]. Therefore, some steps should be taken to treat wastewaters [3- 12] and also to degrade such environmental pollutants [13-21]. Some commonly used conventional treatment [22-29] often fails to generate final effluents at affordable cost with the required discharge quality. To overcome conventional biological treatment drawbacks, alternative technologies are sought for the treatment of phenolic wastewater such as treatment of narrow range of contaminant concentrations, generation of high sludge volumes and delays related to biological acclimatization.

Many researchers have proposed the use of peroxidase for removal of phenol and aromatic amines as a potential alternative due to following three reasons [30-35]:

a. Enzymes are highly selective and can effectively treat even dilute wastes.

b. They are less likely to be inhibited by substances which may be toxic to living organisms and their costs could eventually be less than that of other methods if commercially available enzymes are produced in bulk quantities.

c. Enzymes operate over a broad concentration range and require low retention times with respect to other methods [36].

Peroxidases and laccases show a wide substrate range, especially with regards to phenols and amines. This suggests that these oxidative enzymes may not have specific substrate binding sites. Another problem is the susceptibility peroxidase to inactivation as it got absorbed on the final product of reaction. To remove phenols by peroxidase and laccase is expensive in comparison to tyrosinase as in case of peroxidase, hydrogen peroxide is used as an electron acceptor which is costly in comparison to oxygen which acts as an electron acceptor in case of laccase and tyrosinase. Moreover, cost of laccase isolation is a hurdle in its use to decontaminate wastewater. Therefore, use of tyrosinase is a cheaper alternative for enzymatic wastewater treatment.

Tyrosinase (EC 1.14.18.1), known as poly-phenol oxidase, is a coppercontaining enzyme that catalyses an analogous phenol oxidation reaction to peroxidase [37-40]. This enzyme is widely distributed in vegetable products and fruits such as potato, mushroom, pear, tobacco, papaya, apple, avocado, banana, Florida spiny lobster, brown shrimp and others [41-43]. It is mainly responsible for browning in these food products [44]. It catalyses two different reactions. The primary reaction is the hydroxylation of monophenols resulting in o-diphenols, commonly known as mono-phenolase or cresolase [45]. The second reaction is the oxidation of o- diphenols to o-quinones, often known as o-phenolase or catecholase (Figure 1). Oxygen is used as an oxidant in the both of the oxidation reactions. This enzyme could also be used for the oxidation of many types of phenolic compounds such as chlorophenols, diphenols, methylphenols and naphtanols [46]. Chlorinated anilines and anilines can be also oxidised to some extent and co-polymerisation with un-substituted phenol can result in good removals for these difficult-to-oxidise compounds [47].

Tyrosinase has been isolated and purified from a variety of plant and animal sources [48]. However, few of those are well defined, and preparations show a significant degree of heterogeneity [49]. The molecular weight of tyrosinase ranges from 13.4 KDa to 128 KDa depending on the sources [45,49] (Figure 2).

The enzymatic structure of tyrosinases has been studied by both biological and chemical approaches with respect to domain structure, primary, secondary, and tertiary structure, Cu binding sites, and activation mechanism [50-53]. It is widely accepted that the active site of tyrosinase is quite similar to that of hemocyanin, which is a respiratory copper protein, and contains coupled binuclear coppers (Figure 3). 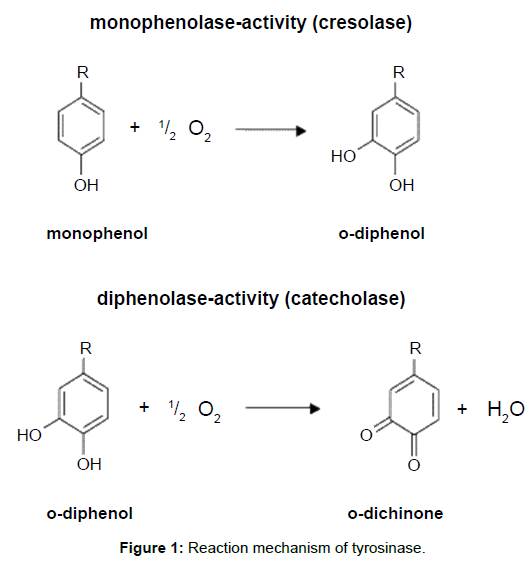 Mushroom Agaricus bisporus tyrosinase is the only commercially available tyrosinase and is considered to be one of the most studied tyrosinases [44,45,54]. Although tyrosinase was isolated and purified from various bacteria, fungi, plants and animals, the objectives were mostly aimed at preventing food browning. The sources of tyrosinase and the authors who described preparation methods of enzymes are summarised in Table 1.

Catalytic activity and its inhibition

Catalytic cycle: Tyrosinase catalytic mechanism has been studied for a long time [45,64]. This mechanism is complex and was believed to be an allosteric mechanism which involves two distinct binding sites for oxygen and aromatic compounds [45,65]. The oxidation state of copper in resting tyrosinase is mostly met derivative, which has two cupric centres [66,67]. In order to initiate the catalytic cycle, a reducing agent reacts with the two copper (II) atoms of met-tyrosinase and reduces them to de oxy-tyrosinase. However, if mono-phenol was used as a substrate, the enzyme activation could not occur without an aid of reducer [68]. Molecular oxygen binds with the deoxy tyrosinase and oxidises it to oxy-tyrosinase.

Tyrosinase catalysed removal of phenolic compounds from wastewaters: Atlow et al. first reported use of tyrosinase for the treatment of phenolic wastewaters [69-78] in 1984. Several monophenols and o-diphenols such as phenol [79], cresol, chlorophenol and catechol were removed very effectively with both commercially obtained and laboratory extracted tyrosinases. Tyrosinase was effective in removing phenol with initial concentrations ranging from 0.01 g/L to 1 g/L. The optimum enzyme dose to treat 50 mg/L (approximately 0.53 mM) phenol was determined to be 60 units/mL. Wada and his colleagues followed up with the tyrosinase catalysed phenol removal from wastewaters according to the procedures of Atlow et al.; however, no precipitate was formed but the reaction solution changed from colourless to dark-brown. They assumed that the enzyme purity might have an effect on the formation of precipitate: i.e., treatment with lower purity enzyme resulted in the precipitation.

pH and temperature: The optimum pH of tyrosinase activity depends on the source of enzyme and on the substrates [42]. However, only one study has been reported involving the treatment of phenol so far. Literature dealing with tyrosinase-catalysed phenolic wastewater treatment [80-84], commercially obtained or crude extract mushroom tyrosinase was used. 50 mg/L phenol was treated with 30 units/mL tyrosinase in different pH buffers and the best removal efficiency was achieved when 50 mM sodium phosphate buffer at pH 8 was used [39].

No such temperature effect has been examined for phenol treatment with tyrosinase. Probably the reason could be the indication of its instability upon exposure to high temperature conditions according to some thermal inactivation studies of tyrosinase [85].

Chemical additives: Unlike the studies involving other phenol oxidase, chemical additives were examined mostly for the purpose of removal of coloured soluble matter when tyrosinase was studied. Since precipitate has rarely been observed in phenol solutions treated with tyrosinase, the colour product remaining in the solution should be removed. Chitosan [90-98] and other natural or synthetic cationic polymers were investigated to accomplish the removal of colour from solutions [47,86,88,99-103].

Although the mechanism of the reaction between chitosan [104- 112] and oxidised phenols has not yet been clearly established, the 2-amino groups of chitosan are likely to perform a nucleophilic attack on o-quinones to form covalent bonds [113,114].The result strongly suggested that the adsorption of the quinones onto the chitosan was presumably the result of covalent interactions, which is referred to as chemisorptions. On the other hand, the interaction between phenol, pyrocatechol, or p-quinone and activated charcoal were weak and considered the result of low-energy physical forces such as hydrophobic interaction.

Wada and his colleagues investigated the use of cellulose, chitin, chitosan [115-121], hexamethylenediamine-epichlorohidrin polycondensate and polyethylenemine to remove coloured products [86]. The first three were natural polymers and the last two were synthetic cationic polymers that had amino groups. Chitin also removed colour effectively, but cellulose had no effect on the colour removal.

Payen et al. immobilised tyrosinase into chitosan gel in many ways [87,123,124]. They prepared chitosan gel [125], by dissolving chitosan in 8% (v/v) acetic acid solution and stirred overnight. After centrifugation of the solution-undissolved chitosan was removed, then the viscous chitosan solution was added through a syringe needle into an 8% NaOH solution. The chitosan gel formed in the NaOH solution was spread on square glass slides. Highly concentrated tyrosinase was added to the central region of the square and then two gel films were combined so as to containing tyrosinase between them and were then sealed using rubber cement. Chitosan was used for the support of the enzyme as well as for the sorbent, in this way, this immobilised tyrosinase could not be reused.

Characterisation of tyrosinase activity was done using L-tyrosine as a substrate. At pH 7 the maximum catalytic activity was observed. Tyrosinase appeared to be unstable at low pH and at elevated temperature. According to the 5 min Microtox assay, most chlorinated phenol solutions and phenol treated with tyrosinase enzyme had lower toxicities when compared to their corresponding untreated solutions. However, toxic products and coloured products were formed during wastewaters treatment [126-131]. Chitosan was found to be effective in inducing their precipitation, resulting in detoxified and colourless solutions. The addition of chitosan was very effective in inducing the precipitation of the coloured products generated by the transformation of phenol with tyrosinase. It was found that the toxicities of the phenol solutions when treated with tyrosinase were substantially lower than the solutions treated with peroxidase enzymes. This represents a very strong advantage when considering this enzyme for applications in wastewater treatment [132-134]. In addition, tyrosinase requires oxygen as an oxidant, which is comparatively much less expensive than the hydrogen peroxide, required by peroxidise enzymes. These might be critical points of interest while considering tyrosinase for applications in wastewater treatment.

Copyright: © 2016 Agarwal P, et al. This is an open-access article distributed under the terms of the Creative Commons Attribution License, which permits unrestricted use, distribution, and reproduction in any medium, provided the original author and source are credited