Potato is one of the most important food crops grown in mid and high altitude areas of Ethiopia. To meet the increasing demand of potato several potato genotypes have been introduced and evaluated at different areas of the country. However, the performances of different released potato varieties were not yet assessed in the study area. To this end, the present study was undertaken with the focus on determining the adaptability of Irish potato varieties for yield and yield components. It was conducted at Kaffa zone Adiyo District in Alarigeta experimental sub-station in 2013 and 2014 Belge cropping season. Seven improved potato varieties; namely Bule, Marachare, Wochecha, Dancha, Jallanie, Gudanie and Belete were used as treatment. Treatments were arranged in randomized complete block design with three replications. Average tuber diameter, average tuber number, average tuber weight, marketable tuber number, unmarketable tuber number, total tuber number, marketable tuber yield, unmarketable yield and total tuber yield data were recorded and submitted to SAS software version 9.0. Analysis of variance for each year showed significant (p<0.05) difference among the varieties for all studied traits except Average tuber diameter and marketable tuber number in 2013 and Average tuber diameter and unmarketable tuber yield in 2014. The highest and consistent tuber yield was found in variety Belete (40.54 t/ha and 39.98 t/ha) in 2013 and 2014 respectively. Therefore, variety Belete, which was given high yield in both years, could be used instated of currently cultivating varieties to increase production and productivity of the crop for better enhancement of food security and livelihood income of the locality.

Potato (Solanum tuberosum L.) is one of the most important food crops in many countries of the world [1]. In volume of production it ranks fourth in the world after maize, rice, and wheat with annual production of 314.1 million tons cultivated on about 18.1 million hectares of land [1] and among the root crops, potato ranks first in volume produced and consumed, followed by cassava, sweet potato, and yam [2].

It is an important food and cash crop in eastern and central Africa, playing a major role in national food security and nutrition specially in disaster situations, poverty alleviation and income generation, and provides employment in the production, processing and marketing sub-sectors [3,4].

Potato is efficient in converting resources such as labour and capital in to a high energy food. Its efficiency of protein production is also higher than commonly realized. If carefully managed, it gives the highest yield of nourishment per hectare of all basic food stuffs in tropical countries. Furthermore, the growing period is only 90-125 days; enable multiple cropping for optimum use of the available land moisture. Hence, it is noted that in potato producing areas double cropping is possible [5].

Potato is grown for food, animal feed, industrial uses and for seed tuber production. The main use is still as direct food but, an increasing proportion is processed into snack food. Potato is important for subsistence farmers but may also be a cash crop [6].

Potato was introduced to Ethiopia in 1858 by the German Botanist Schemper. Since then, potato became an important garden crop in many parts of the country. About 70% of the available agricultural land is suitable for potato production which is located at an altitude of 1500 to 3000 m.a.s.l with an annual rainfall between 600 and 1200 mm [4]. More than 3.3 million smallholders are engaged in potato production and over 1.61 million tonnes of potato was produced in 2013/14, a 71% increase compared to production in 2008/09 [7]. According to the [8], the average potato tuber yield in Ethiopia is estimated to be 9.0 t/ha in 2013/14. Even though this increased average national yield is very low as compared with the world average potato tuber yield (17.16 t/ha) [7]. A number of production constraints that accounts for low yield have been identified in the country and which are also commonly prevailed in the study area. The major ones are lack of stable, well-adapted, high yielding, acceptable and disease resistant cultivars and using of local cultivars, which are highly susceptible to late blight that sometimes leads to 100% yield loss [9]. Improved potato varieties together with improved management proved to give three to four fold yield advantage as compared to local varieties together with traditional production and management practices [10]. Thus, testing improved potato technologies to specific areas would help to identify best fit technologies to the existing production system that can ensure sustainable food security [10]. Therefore, the experiment was amid to test the adaptability and select high yielding potato variety to increase production and productivity of the crop for better improvement of food security and self sufficiency of livelihood of the area.

The experiment was conducted at Adiyo District, Alarigeta experimental sub-station in South Western Ethiopia during 2013/2005 and 2014/2006 belg cropping season. Alarigeta is 21 km away from Bonga town to South, which is 449 km south west of Addis Ababa. The site an altitude of 2474 masl and is experienced one long rainy season lasting from March/April to October. The mean monthly rain fall received the area was 109 mm in 2013 and 156 mm in 2014. The mean monthly minimum and maximum temperature was 19°C and 29°C in 2013, and 18°C and 27°C in 2014 according to South west Jima meteorological stations data. The soil of the area is characterized by sandy clay loam as determined by Jima Agricultural research Center soil and Water research processes soil laboratory.

Seven varieties were used for evaluation namely; Gudanie, Jallanie and Belete varieties obtained from Holeta Agricultural Research Center and Bule, Dancha, Marachare and Wochecha varieties obtained from Awassa Agricultural Research Center were used as a treatment. Treatments were arranged in randomized complete block design with three replications. Land was ploughed three times and all other management practices, such as seed and fertilizer rate, weeding, insect pest and disease control were applied as per the general recommendations for potato production [9]. The experimental field was divided in to three Blocks and each containing 7 plots with a distance of 1 m between block and 0.75 m between plots. Spacing between row 75 cm and between plants 30 cm was used. Planting was done in November 2013/2005 and 2014/2006.

Analysis of variance (ANOVA) for yield and yield components were showed significant (p<0.05) difference among the varieties for all traits except average tuber diameter and marketable tuber number in 2013 (Table 1) and average tuber diameter and unmarketable tuber yield in 2014 (Table 2). The presence of significant difference among the genotype for these traits was due to genetic variability of the varieties.

Table 2: Analysis of variance (ANOVA) for yield and yield components of potato at Alarigeta in 2014.

Table 3: mean separation of potato yield and yield components at Alarigeta in 2013.

Table 4: mean separation of potato yield and components at Alarigeta in 2014.

Among the varieties highly significant (P<0.05) difference were observed for total tuber yield in 2013 and 2014 (Tables 1 and 2). The highest total tuber yield was exhibited in variety Belete in 2013 (40.54 t/ha) and 2014 (39.98 t/ha). However, the lowest total tuber yield was displayed in variety Gudanie (18.23 t/ha) and Wochecha (10.1 t/ha) in 2013 and 2014 respectively. The highest overall mean total tuber yield was found in 2013 which was 25.97 t/ha, while 25.26 t/ha had got in 2014. As the overall mean indicates the total tuber yield was almost similar in both years even though some varieties showed yield difference across the years. Variety Belete was showed the highest and consistent tuber yield over years followed by Bule which was the second high yielded and consistent tuber yield (Figure 1). The high yield variation was observed in 2014 than 2013 indicating the suitability of growing season to explore the genetic potential of the variety. In contrast, all varieties were scored far below than the national total tuber yield level [9] and the yield loss was ranged from 14.69% up to 51.02%. The reason might be due to the shortage of rain fall during the initial growth and development stage, occurrences of late blight disease and high rain fall occurrence around the physiological maturity that can enhance different disease like root rot. In general, Belete and Bule were showed consistence and better adaptability in the test area. 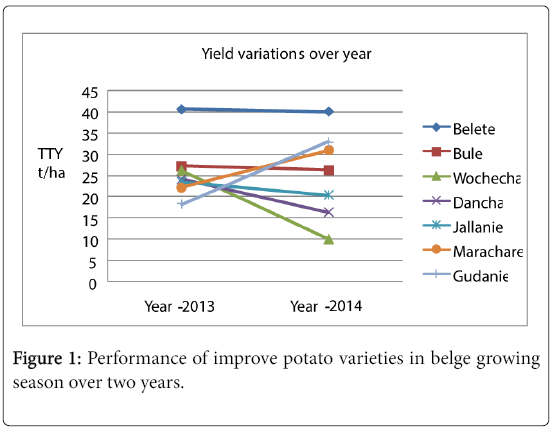 The analysis of variance for yield and yield components had showed highly significant (P<0.05) difference among the varieties for all studied traits except tuber diameter and marketable tuber number in 2013 and tuber diameter and unmarketable tuber yield in 2014. The presence of significant differences among the varieties indicates the genetic difference of varieties in yield potential, disease resistance and response to different climatic factors. The significance of traits in one year and not in another year indicates the extent of variation of response of traits to the existing variations in climatic factors in different year.

The result has revealed that there is no superior varieties for all tested characters in the analysis suggesting the traits are differently affected by genetic, agronomic and climatic factors. The mean performance of tested Varieties over testing years for total tuber yield was ranged from 40.257 t/ha for Belete in 2013 to 18.097 t/ha for Wochecha in 2014. All the varieties were scored far below than the national total tuber yield level and the yield loss was ranged from 14.69% to 51.02%. This might be due to the presence of high rain fall on ward to flowering stage and resulted in late blight and root rot disease, which obviously reduce the crop yield.

Although certain variations observed across the years in tuber yield for different varieties, Belet and Bule were showed high and consistent yield over years. Therefore, on the basis of present study Belete variety, which was given high yield in both years, could be used instated of currently using varieties to increase production and productivity of the potato crop in the area for better enhancement of food security and livelihood income. In the shortage of Belete, Bule could be used, which was second high yielded variety.

The research gap and future directions: agro ecological characteristics and soil fertility status of the area is being different from other area, planting date and fertilizer rate determination, seed degeneration study, new genotype introduction to release high yielding and disease resistant variety, pre extension and demonstration activity should be done.

I would like to thank Bonga agricultural research center for overall facilities provided during the execution of this trail.

Copyright: © 2018 Fikre H. This is an open-access article distributed under the terms of the Creative Commons Attribution License, which permits unrestricted use, distribution, and reproduction in any medium, provided the original author and source are credited.