Copyright: © 2017 Tersagh I, et al. This is an open-access article distributed under the terms of the Creative Commons Attribution License, which permits unrestricted use, distribution, and reproduction in any medium, provided the original author and source are credited.

Polycyclic aromatic hydrocarbons are ubiquitous in nature and persist in the environment as a result of their low solubility in water due to their hydrophobicity [1]. They are highly toxic, mutagenic, carcinogenic and genotoxic and also exhibit toxicity to algae, fish and can bio accumulate along the food chain [2]. Anthracene is a tricyclic poly aromatic hydrocarbon which is characterized by a three fused benzene ring. It is used in detecting contamination of PAHs and as a model polycyclic aromatic hydrocarbon for determination of the factors that affect bioavailability, rate of microbial degradation and biodegradation potential of PAHs in the environment [3]. It is among the substances of very high concern by the European chemical agency due to its toxicity [4]. Its utilization by the consortium of the bacteria was reported in four days Arulazhan et al. [5] and has been removed from the environment by E. coli, Mycobacterium Pseudomonas, Rhodococcus, Sphingomonas and Nocardiodes species as reported in previous research findings [6-9]. Mathew and Amund [10,11] reported 91.7% and 51% anthrance degradation by Microcccus luteus and Pseudomonas cetronellolis from crude oil polluted environment respectively. Oladimeji et al. [12] reported degradation of 95.2 percent of anthracene by Corynebacterium sp and 93.5 percent by Pseudomonas putida which is more when compared to degradation by Pseudomonas aeruginosa (312A) at the rate 3.90 mg L-1 day-1 of seventy one percent of anthracene degradation with the addition of the 250 mg L-1 of medium after 48 days as reported by Jacques. Mathew and Amund [10] isolated Micrococcus luteus from a crude oil contaminated environment which degraded about 91.7% of anthracene and Pseudomonas citronellolis (222A) which degraded about fifty one (51%) percent of anthracene as reported by [9,11] observed degradation of 74.8% anthracene which was supplemented in BSM medium at 0.1% with Acridine orange induced plasmid curing by Pseudomonas sp though comparatively less than the degradation done by Corynebacterium sp and Pseudomonas putida. Benzo(a)anthracene a crystalline polycyclic aromatic hydrocarbon has chemical formula C18H12 and consist of four fused benzene rings. It is odourless, colourless to yellow brown flake, plate or powder. Dibenzo(a,h)anthracene is a mutagen, carcinogenic aromatic hydrocarbon which is crystalline in nature and consists of five fused benzene rings and is produced by incomplete combustion of organic matter. It is also found in coal tar, soot, gasoline exhaust, tobacco smoke and certain food products such as smoked foods and barbecued foods. The substance is used for research to induce tumorigenesis. Juhasz et al. [13] reported the degradation of benz(a)anthracene and dibenzene(a,h)anthracene by Burkholderia cepacia as sole carbon and energy source though limited growth was observed on dibenz(a,h) anthracene. The present study aimed at monitoring biodegradation of anthracene, benzo(a)anthracene and dibenzo(a,h)anthracene by indigenous strains of aerobic heterotrophic bacteria and cyanobacteria isolates from petroleum hydrocarbon contaminated Bodo creek characterized bybrackish water – a moderate salt aquatic environment.

The study area was Bodo creek; characterized by brackish water which is heavily contaminated with crude oil and is located in Ogoni land in Gokana, LGA of Rivers State, in Niger Delta region.

Media conditions and enumeration of cyanobacteria and aerobic heterotrophic bacteria

BG-11 medium for isolation of cyanobacteria was composed as described by Ichor [14]. Enumeration of cyanobacteria was carried according to the method adopted by Ichor. The aliquot of the cyanobacteria culture comprising of different BG 11 medium – water volume ratio was subjected to 12 hr of sunlight and 12 hr of darkness for 14 days. The mineral salt agar as described in Mills et al. 1978 was used for enumeration of aerobic heterotrophic bacteria. The vapour phase transfer method was adopted for enumeration of hydrocarbon utilizing bacteria, following serial dilutions of water as described by Mills and Ichor [14]. Biodegradation Experiment using Cyanobacteria and Aerobic Heterotrophic Bacteria, a loopful of 24 hours culture aerobic heterotrophic bacteria was transferred into 400 ml starling nutrient broth in 500 Elenmeyer flask this was supplemented with nystatin and CUSO4 to prevent growth of fungi and cynobacteria respectively. It was incubated at 37°C for 24 hours. Treatment options of brackish water and sediment samples labelled A and B are prepared ascetically transferring 200 ml each of the aerobic heterotrophic bacteria and cyanobacteria suspension into the 500 ml sterile distilled water in two separate 1000 ml flask and was calibrated using mac farland standard 0.5 exactly 100 ml of inoculums’ size was used for each Treatment the experimental setup were each filled with 11 liters of water in different water jars and were labelled A, B, C+D the control experiment was labelled H and it was contaminated with 32300 ppm of sterile bony light crude oil sample obtained from shell petroleum company heterotrophic bacteria, cynabacteria and aerobic heterotrophic + cynobacteria were inoculated in water samples A, B, C+D respectively. Control H was not inoculated with water sample, sample B was treated with 0.25 mg/ml of ciprofloxacin and NY statin sample A was treated CuSO4 and nystatin to inhibit the activities of cynobacteria and fungi in the experimental setup. Samples C+D were treated with 0.25 mg/m of nytatin only, whereas control setup which was labelled H was left utreated prior to the experimental setup. Containers for the treatments were thoroughly washed with detergents and rinsed repeatedly with distilled water. 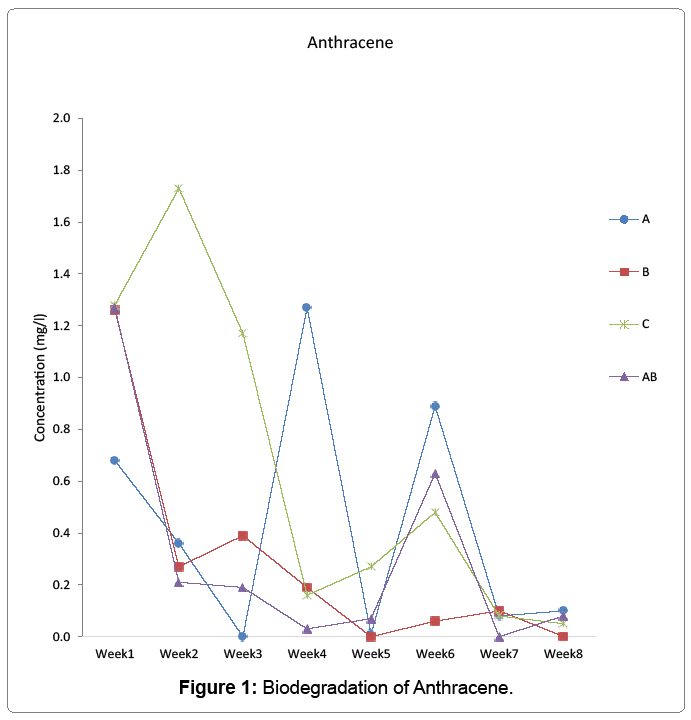 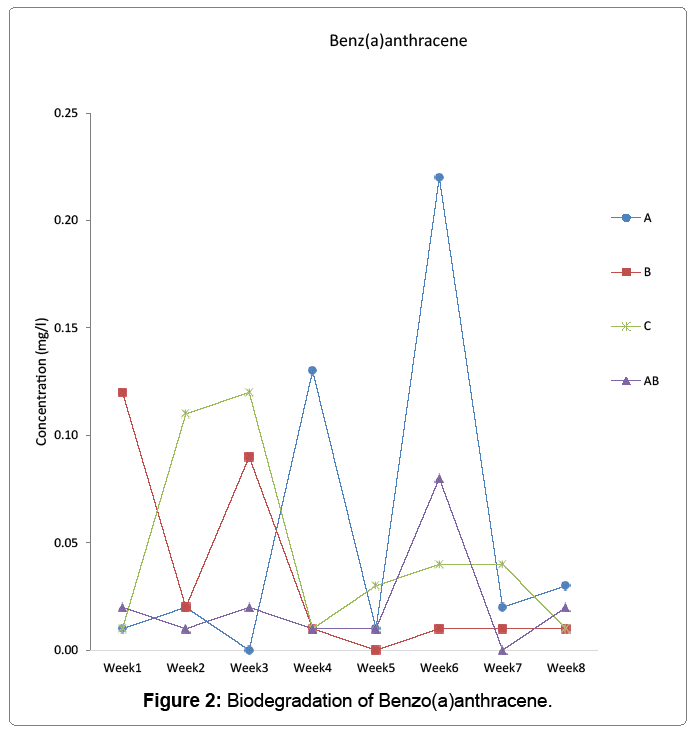 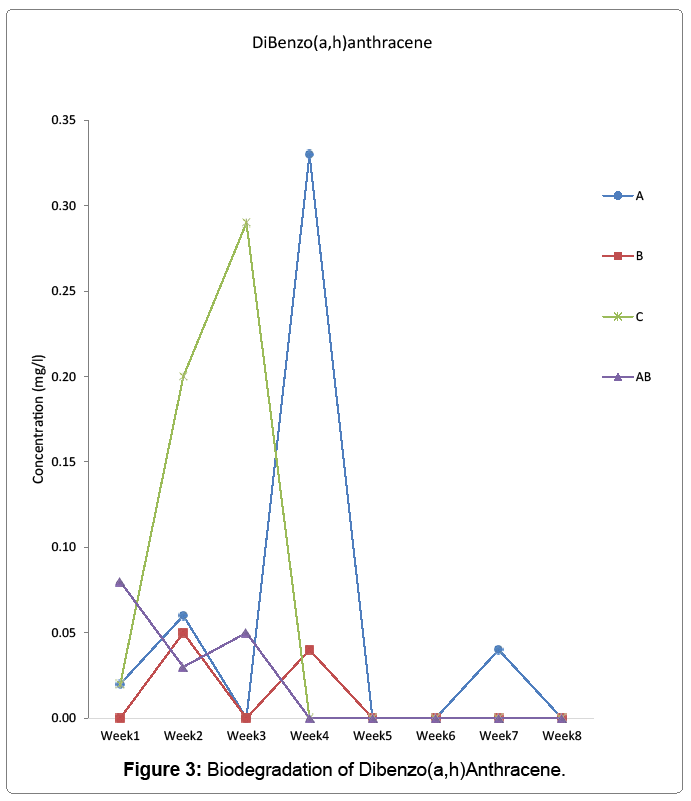 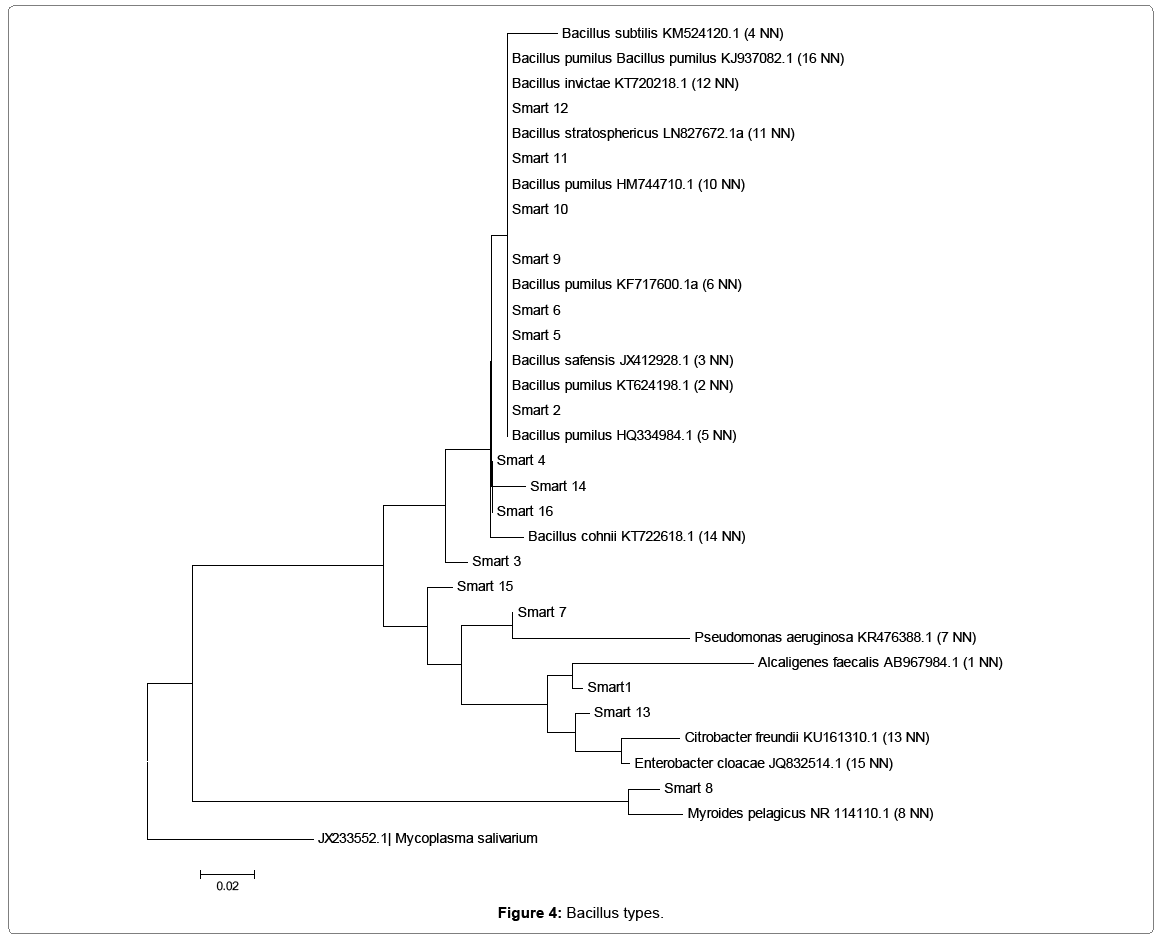 The resident aerobic heterotrophic bacteria and cyanobacteria isolated from Bodo creek degraded anthracene, benz(a)anthracene and dibenz(a,h)anthracene. The capability of aerobic heterotrophic bacteria and cyanobacteria from Bodo creek to degrade poly aromatic hydrocarbons has been reported previously. Ichor, et al. [18-20] reported on biodegradation of phenanthrene, PAH’s, fluoranthene, benzo(b)fluoranthene and benzo(k)fluoranthene by aerobic heterotrophic bacteria and cyanobacteria resident in Bodo creek. The cyanobacteria isolates are as reported by Ichor and the consortium of aerobic heterotrophic bacteria and cyanobacteria evolutionary history inferred as contained in Ichor [19]. Earlier research findings implicated Mycobacterium sp strain PYR-1 in degradation of 92% anthracene [21- 23]. Alkaliphilic bacteria and Bacillus badius strain D1 Ahmed [24] was reported to have degraded anthracene variously. Mycobacterium sp strain S1 grew on commercial anthracene [25]. Species of the genera Spingobium, Rhodococcus, Pseudomonas, Mycobacterium and Norcadia reportedly degraded anthracene [26]. Previous results also indicated that Alcaligenes faecalis MVMB1 effectively degraded anthracene [27]. Most of the HMW PAH-degrading bacteria; Actinomycetes, a variety of non-actinomycete bacteria have also been reported to metabolize benz[a]anthracene, fluoranthene, chrysene and pyrene. Three Burkholderia cepacia strains isolated from soil were observed to have grow on pyrene at concentrations of up to 1,000 mg/ liter and also degraded fluoranthene and benz[a]anthracene as a sole source of carbon and energy [27]. Pseudomonas (Sphingomonas) paucimobilis, EPA 505 reportedly biotransformed benz(a)anthracene. Mueller et al. [28] reported mineralization benz[a]anthracene by bacteria as its sole source of carbon and energy and formed 14CO2. A soil bacteria, Alcaligenes denitrificans strain WW1 also degraded benz[a]anthracene. Mycobacterium strain RJGII-135 cometabolized benz[a]anthracene and formed three dihydrodiols [29]. S. paucimobilis was said to have mineralised dibenz(a,h)anthracene to 33.3, 12.5 and 7.8% 14CO2 after 16 hrs of incubation period [30]. Dibenz(a,h)and Bap were reportedly co- metabolised by B. cepacia strains and decreased at 41 and 52% in dibenz and Bap in 56 days. B. cepacia strain VUN 10003 degraded 1.65 mg of dibenz(a,h)anthracene per litres as a sole carbon oil energy source after 56 days [13]. The result of study which spanned for 56 days of monitoring degradation of anthracene, benzo(a)anthracene and dibenzo(a,h)anthracene in a moderate salt aquatic environment – Bodo creek revealed a fluctuation in quantity of PAH’s studied throughout the period monitored with significant reduction on the last day sampled in all the treatment without nutrient amendment [31-33]. This trend of degradation in natural brackish water was previously reported during degradation of Phenanthrene, poly aromatic hydrocarbons, fluoranthene, benzo(b)fluoranthene and benzo(k)fluoranthene [18-20].

Based on the results of the present study, crude oil contaminated bodo reek has interest microbial capacity for the biodegradation of PAH as an alternative to the physical and chemical methods. It indicates the aerobic heterotrophic bacteria and cyanobacteria singly and as a consortium effectively degraded anthracene, benzo(a) anthracene and dibenzo(a,h)anthracene without nutrient amendment and bio stimulation of the studied organisms implicated in the process. Strategies for enhancing the metabolic capacity of the microbes, bioavailability of polyaromatic hydrocarbons and understanding the metabolic pathway of the degradation are highly advocated. 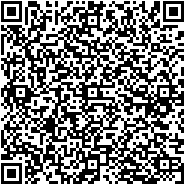