Copyright: © 2015 Schroeder G, et al. This is an open-access article distributed under the terms of the Creative Commons Attribution License, which permits unrestricted use, distribution, and reproduction in any medium, provided the original author and source are credited.

Human consumption of shellfish and certain finfish contaminated with the neurotoxin domoic acid causes Amnesic Shellfish Poisoning (ASP), a syndrome that results in preventable morbidity and mortality [1-5]. Although the incidence of ASP is rare around the world due to careful monitoring by government agencies since the original incident in 1987, patients can still present with clinical symptoms (Table 1) that may not be known to physicians. Hence, the goal of this report is to provide information to clinicians, along with relevant background material about the biological source of the neurotoxin.

History of the Event

ASP was first described in late 1987, in eastern Canada, when at least 153 human cases of intoxication and four deaths of elderly patients were reported, along with significant morbidity in other patients [6-8]. All were determined by Health Canada to have consumed aquacultured blue mussels (Mytilus edulis) from Prince Edward Island, eastern Canada.

Identification and Source of the Toxin

The toxin in the mussels was discovered to be domoic acid, a small (311 g/mol) polar amino acid [9]. Surprisingly, this toxin was identical to the one reported in Japan in 1959, from a marine red macroalga, Chondria armata. Seaweed extracts containing domoic acid had been used as an effective anthelminthic to treat intestinal worms in Japanese children. However, in the case of the Canadian outbreak, an order of magnitude higher dose (~290 mg) was consumed, compared to the “therapeutic” anthelminthic dose (~20 mg) used by the Japanese in treating for parasites [3,10]. Moreover, the elderly Canadian patients were more vulnerable and at a higher risk of mortality due to reduced renal function, as well as having a compromised blood-brain barrier [11]. The poisoning led to serious and potentially life-threatening neurological sequelae, including primarily serious and protracted generalized convulsions and seizures, as well as memory loss (hence the name of the syndrome) and even death [7,8]. The toxin also resulted in dermatologic, pulmonary, ophthalmic, as well as gastrointestinal and neurologic manifestations (Table 1) [12,13].

The biological source of domoic acid in the 1987 poisoning event was not seaweed, but rather species of phytoplankton, the marine pennate diatom Pseudo-nitzschia multiseries (Figure 1) [6]. At present, 45 species of the genus Pseudo-nitzschia have been discovered, of which 19 produce domoic acid [14]. These toxigenic species are found worldwide [3,4]; another diatom, Nitzschia navis-varingica, also produces domoic acid [15]. Mounting global research has discovered that repeated seasonal harmful algal blooms (HABs) of toxigenic Pseudo-nitzschia species exposed birds (e.g. pelicans, cormorants; [16]), marine mammals (e.g. sea lions, seals, dolphins, whales; [17]), and marine fish [18,19] to toxic and sublethal doses of domoic acid. Blooms of toxigenic Pseudo-nitzschia have become more prevalent along coastal waters worldwide. The 2015 toxic bloom along the entire west coast of North America resulted in numerous harvesting closures and human health concerns. It is not known why this diatom produces domoic acid, as this biotoxin does not appear to harm its immediate predators. Humans become poisoned after consuming molluscan shellfish (e.g., mussels, clams, oysters, scallops, cockles) that have filtered the toxic diatom cells out of the water, therefore concentrating the toxin in their digestive system (Figure 2). The toxin can be present at very high in bivalve shellfish, particularly within the viscera and intestinal tracts [6]. Humans can also become poisoned by eating planktivorous fish (e.g., anchovies, sardines) that have fed on the toxic diatoms, recreational fish (e.g., white croaker, staghorn sculpin, coho salmon) that feed on other contaminated pelagic fish, or benthic organisms (e.g., Dungeness crabs) (Figure 3). The serious impact of chronic low doses of domoic acid on human health are not understood, compared to what is known about exposure to high doses [10,19,20]. This is especially problematic for coastal indigenous populations that consume molluscan shellfish on a regular basis. 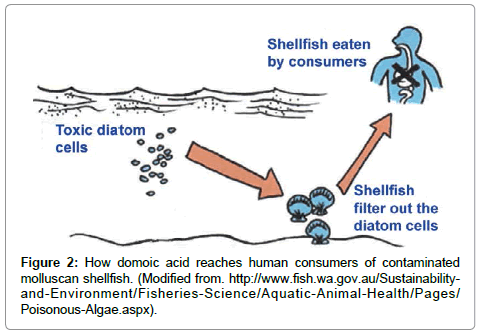 Figure 3: Biotoxins like domoic acid from harmful algal blooms are transferred throughout the food web when toxic algal cells are eaten by zooplankton, fish, and shellfish that are, in turn, eaten by other animals and humans. The small micrograph at the upper left shows chains of Pseudo-nitzschia cells (Source: Gary Wikfors; http://www.whoi.edu/redtide/impacts/ecosystems).

An acute neuronal hyperexcitation syndrome is caused by toxic levels of domoic acid in humans. As well, peripheral neurons are affected, followed by a chronic loss of function in neurological systems [11,12,25,26]. These are most susceptible to excitotoxic degeneration, especially in the hippocampus amygdala and anterior horn cells of the human spinal cord.

Neurotoxic synergism is postulated to occur by voltage-dependent magnesium block at the NMDA receptor channel, followed by domoic-acid-mediated activation of non-NMDA receptors. This leads eventually to chronic loss of function in short-term memory, as well as certain cognitive functions, and has even been associated with dementia [27,28]. A rat model has shown the sequence of events leading to damage caused by domoic acid (Figure 4) [29]. Mice exposed to domoic acid in the laboratory get limbic seizures, gait abnormalities and demonstrable degeneration of their hippocampus [26]. The effects of domoic acid on the nervous system and memory have triggered interest in those studying Parkinson’s disease, Huntington’s chorea, Alzheimer’s disease, and other dementias. 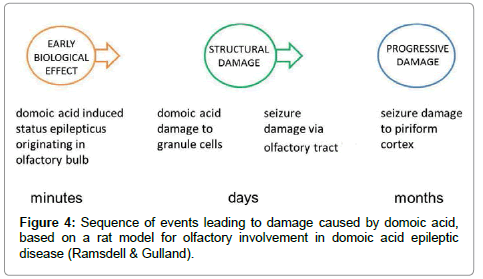 Figure 4: Sequence of events leading to damage caused by domoic acid, based on a rat model for olfactory involvement in domoic acid epileptic disease (Ramsdell & Gulland).

Extensive research on patients of the 1987 intoxication revealed a wide range in the onset time of symptoms: 15 min to 38 hrs (mean, 5.5 hrs) after ingestion, depending on the amount and cumulative absorption of ingested toxins [7,8]. The maximal neurologic deficits were observed, four hours post-ingestion, in patients exhibiting the least effect, versus 72 hours in patients most affected by domoic acid. A summary of the symptoms is given in Table 1.

Patients presented with permanent neurologic sequelae, amnesia and cognitive abnormalities, including coma, mutism, seizures, and purposeless chewing and grimacing. The cognitive dysfunction occurred in patients manifesting neurologic signs and symptoms within 48 to 72 hrs. Some patients were described with hiccups and emotional lability, with uncontrolled crying or aggressiveness [7]. In addition, patients exhibited seizures, myoclonus, hemiparesis, hyporeflexia, profuse respiratory secretions, and hemodynamic instability with labile blood pressure. Patients had a predominantly anterograde memory disorder. However, some severely affected patients also had retrograde amnesia, extending several years prior to the mussel-induced intoxication [8]. Nearly a year after the ASP event, an 84-year-old male survivor reexperienced severe seizures and was diagnosed with temporal lobe epilepsy caused by domoic acid intoxication [29,30].

Those most affected were males, older patients (>60 years of age), as well as immunocompromised younger patients. Those <65 years of age had pre-existing illnesses, such as insulin-dependent diabetes, chronic renal disease, autoimmune conditions requiring chronic steroid therapy, hypertension with a history of TIA’s, chronic hepatic dysfunction and alcoholic liver disease. Animal studies have demonstrated that the placental barrier is unable to prevent fetal exposure to domoic acid and that the toxin can transfer to neonatal rats during lactation [31]. Thus, pregnant women, infants and children must remain particularly vigilant to avoid consuming high-risk shellfish.

Testing for the presence of domoic acid in seafood consumed by humans is carried out by government agencies. However, the toxin can also be detected in blood by competitive ELISA [32].

Currently, the only approved therapies for humans intoxicated with domoic acid are anticonvulsant drugs and maintenance therapy; although a number of glutamatergic antagonists are in preclinical development [26]. Treatment for domoic acid toxicity therefore consists of supportive symptomatic therapies, including:

2. Antiemetics for nausea, vomiting; properistaltic/prokinetic to increase transit time through GI tract such as metoclopramide.

4. Administration of intravenous anticonvulsants, e.g., Diazepam and/or Phenobarbital, to treat seizures (but seizures in these cases are resistant to treatment with Phenytoin).

5. Clinical management of cardiac dysrhythmias; these are typically exacerbated by massive electrolyte disturbances as we as shifts in Mg and Ca.

6. Continuous ECG monitoring, along with correction of underlying electrolyte abnormalities, infusion of I.V. magnesium sulfate if necessary; also therapeutic for seizures and/or cardioversion if patient is hemodynamically unstable and exhibits organ hypoperfusion.

Some neurons undergo excitotoxic cell death very quickly after exposure to domoic acid. However, toxicity may also develop over time, during which domoic acid can initiate a “neurotoxic cascade” [33], long after the toxin is gone. Treatments could therefore catch patients during the early stages of toxicity, preventing them from experiencing some of the later effects, notably seizures that intensify over time and are responsible for memory loss. Promising research indicates that administration of troxerutin (a flavanol) [34], as well as ursolic acid (a natural triterpenoid) [35], to domoic-acid-treated mice results in reversal of memory impairment. Both are potential agents for prevention and treatment of cognitive deficits resulting from domoic acid toxicity. Furthermore, guidance for developing other treatments can be gained from experimental animal studies [26].

Contacts in the Event of Amnesic Shellfish Poisoning

1. Age, weight and condition of patient.

2. Type of shellfish or finfish ingested.

3. Amount of shellfish or finfish ingested.

4. Where the shellfish or finfish was eaten.

5. Where the shellfish or finfish was harvested.

Do not eat shellfish sold as bait. Bait products do not meet the same food safety regulations as seafood for human consumption. Be careful of anchovies and sardines harvested in late summer and early fall (especially in endemic coastal regions) and most importantly during reported HABs. Check with local health officials before collecting shellfish (especially mussels, oysters, clams, scallops and certain verities of crab, particularly Dungeness crabs). Separate and discard the more toxic viscera of shucked scallops from to adductor muscle to reduce the toxic load ingested. Avoid consuming large amounts of any potentially toxic marine species over a short period of time, to minimize the likelihood of more severe sequelae. A searchable list of references on domoic acid and ASP is found in [36]. 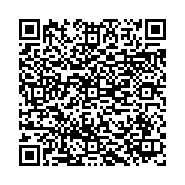