An Approach to Computer Aided Drug Design of some Bioactive Cinnamoyl Hydrazones, In Silico and Docking Studies as Possible COX-2 Selective Inhibitors

Web-based tools offer many advantages for processing chemical information, most notably ease of use and high interactivity. The methods to calculate various molecular properties relevant to drug design are described, including the prediction of intestinal absorption, blood-brain barrier penetration, efflux and water solubility. Information about the web technology used is also provided [1].

Acyl hydrazones are a versatile class of nitrogen-substituted molecules with a high degree of chemical reactivity, used as precursors and intermediates of many important organic molecules such as heterocyclic, pharmaceuticals, polymers, dyestuffs and photographic products [2]. Substituted acyl hydrazones show a variety of biological activity, such as analgesic, anti–inflammatory, anti-microbial, anticonvulsant, anti-platelet, anti-tubercular, anti-viral, schistomiasis and anti-tumor activities [3,4].

In recent years, intensive research has been conducted on cinnamic acid derivatives, seeking to create new polyfunctional drugs based on them [5,6]. This class of compounds is of additional interest because some representatives cinnamic acids such as caffeic, ferulic acid, etc. are widely represented in plants and together with flavonoids, participate in the regulation of many biochemical processes. The increased interest in this group of compounds is due to the variety of their pharmacological activities: e.g. antioxidative [7], antitumor [8] and antimicrobial [9], as well as to their ability to regulate the activity of a number of enzyme systems that participate in cell activation processes. Caffeic and ferulic acids inhibit 5- and 12-1ipoxygenases [10], reduce the level of leukotrienes in tissues and may potentially be used to treat bronchial asthma [11].

Selective inhibition of COX-2 (Cyclooxygenase-2) by NSAIDs (Non-steroidal anti-inflammatory drugs) has been proposed as an approach to reduce their associated side effects while maintaining efficacy. The improved safety profile of selective COX-2 inhibitors will allow more widespread and sustained use than is currently possible with standard NSAIDs. COX-2 is expressed after an inflammatory stimulus and releases metabolites that are used to induce pain and inflammation. Adding interest are the findings that COX-2 deletion or inhibition may lead to reduction or exacerbation of the inflammatory response, depending on the model. COX-2 appears to play a significant role in resolution of inflammation, a role that is important in the healing of gastric ulcers. During normal physiology, COX-2 levels are undetectable whereas during periods of acute and chronic inflammation, the level of COX-2 is significantly higher [12].

Based on the literature review on the anti-inflammatory and related activities of cinnamic acid derivatives [13-18] and method followed by Morphy et al. [19,20] it was aimed to design new cinnamic acid hybrids, cinnamoyl hydrazones that might act as effective bioactive agents and to evaluate the in silico parameters to optimize the activity through systematic modification of the substituent on the benzylidene core. Yet another goal of the study was to unravel the selective inhibitory activity on COX-2 enzyme by conducting docking studies for active compounds to investigate the nature of interactions contributing to the possible biological activity.

Pharmmapper serves as a valuable tool for identifying targets for a novel synthetic compound, a newly isolated natural product, a compound with known biological activity or an existing drug whose mechanism action is unknown [26]. Suitable targets were predicted by Pharmmapper and docking studies were conducted using Swiss Dock software [27].

Prompted by the medicinal importance of hydrazones and cinnamoyl moieties, the structural analogues of cinnamoyl hydrazones were designed in such a way that, the analogues have both biological active moieties.

The structural analogues have been designed in such a way that it will show more drug likeness score than the prototype molecule but having the same pharmacophore essential for the activity. A series of fourteen N-[(1E)-2-substitutedphenyl-1-{N'-[(1E)-phenyl methylidene] hydrazine carbonyl} eth-1-en-1-yl]benzamides [1-14] were designed and their chemical structures were drawn using Marvin sketch.

Different substituents such as electron donating (chloro, bromo, iodo), electron releasing (hydroxyl, methoxy, methyl), etc. were tried on the benzylidene ring to study their effect on the predicted properties and bioactivities.

The list of designed acyl hydrazones analogues with drug likeness scores, and other molecular properties have been listed below. The position of substituent on benzylidene ring was modified in these designed molecules to get increased drug likeness score. Table 1 shows the different substituted compounds and Table 2 indicates the nomenclature generated using software chemicalize.org. 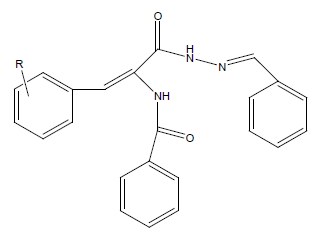 Lipinski’s Rule of Five describes molecular properties important for a drug’s pharmacokinetics in the human body, including their absorption, distribution, metabolism, and excretion [28]. Using Chemicalize, Mol inspiration and Mol soft molecular properties were predicted for the designed compounds. The results obtained, given in detail in Tables 3-6, revealed that all the compounds tested obeyed Lipinski rule of five with not more than 5 hydrogen bond donors (OH and NH groups), not more than 10 hydrogen bond acceptors (notably N and O), not more than 15 rotatable bonds (rotb), molecular weight under 500 g/mol and a partition coefficient, log P less than 5 except for compound 3 and 8. All the compounds tested also passed the other Lipinski like filter such as bioavailability.

Absorption is defined as the process involved in getting a drug from its dosage form into the body and the ability to predict the percent oral absorption is primary goal in the design, optimization and selection of potential candidates in the development of oral drugs. Topological surface area (TPSA) is another key property that has been linked to bioavailability and it was found that passively absorbed molecules with a TPSA more than 140 are thought to have low oral availability [29]. TPSA obtained for the tested compounds were below 140 indicating their good oral bioavailability. Thus these results predicted the good drug likeliness, solubility, permeability and oral bioavailability of compounds.

Drug likeness may be defined as a complex balance of various molecular properties and structure features which determine whether particular molecule is similar to the known drugs. Table 8 lists the predicted scores of selected parameters for compounds. Positive scores were obtained for the compounds indicating the potential quinazolinone nucleus and amino acid residues. Compounds 3 and 8 showed negative scores, which may be due to the molecular properties that do not obey the Lipinski rule of five.

Conventional non-steroidal anti-inflammatory drugs are profoundly used in the treatment of wide variety of inflammatory conditions and they act by the inhibition of cyclooxygenase (COX), the enzyme involved in the biosynthesis of prostaglandins, prostacyclins and thromboxanes from arachidonic acid [32].

Selective inhibition of COX-2 has been proposed as an approach to reduce their associated side effects while maintaining efficacy. The improved safety profile of selective COX-2 inhibitors will allow more widespread and sustained use than is currently possible with standard NSAIDs [33].

SC-558, a diaryl heterocyclic inhibitor has 1900-fold selectivity for COX-2 over COX-1. It has a central pyrazole ring and a sulphonamide substituent attached to one of the aryl rings. The interactions observed with SC-558 at the active site of the coenzyme COX-2 were as following, the bromophenyl ring was bound in a hydrophobic cavity formed by Trp356B, Tyr 354B, Phe350B, Ser499B and Leu500B. The trifluoromethyl group was bound pocket formed by Val 318B, Leu 321B and Arg89B and. The sulphonamide group extended into an adjacent relatively polar region and interacted with Val 492B, Phe487B,Gln161B, His58B and Arg482B. The central pyrazole ring showed strong interactions with Tyr324B, Val318B and Ala496B. These features of SC-558 binding are quite important in studying the binding modes of various selective and non-selective COX-2 inhibitors.

Further the docking studies on standard drug phenyl butazone showed similar interactions at the active site of COX-2. The phenyl ring was found in the hydrophobic pocket formed by Tyr324B, Ser322B, His58B, Arg482B and Phe487B. The other phenyl ring at position of the quinazolinone ring was bound in an adjacent pocket formed by Trp356B and Tyr354B. The butyl group extended into a relatively hydrophobic region and interacted with Leucine500B, Arg89b, Leu328B and Val85B. Oxygen of carbonyl groups interacted with Arg 89B and Ser499B.

Compound 5 exhibited similar type of interactions, with the strongest interaction of 4-hydroxy group with OH of Tyr 354B. Phenyl ring was found in a hydrophobic cavity formed by Trp356B, Tyr 354B, Phe350B, Ser499B and Leu500B and the hydrazone scaffold interacted with Val318B, Ala 496B, Leu 500B and Arg89B. The hydrophobic pocket formed by Tyr324B, Ser322B, His58B, Arg482B and Phe487B was occupied by the benzoyl group. Figures 1-3 clearly indicate the similarity in the interactions, observed, in which superimposition of the tested compounds, standard drug and reference ligands can be seen. The compounds which did not exhibit good anti-inflammatory activity showed poor docking interactions with large variations in their binding energies. The compound 14 exhibited interactions extended to other amino acids and different pockets other than to those observed with SC-558 and phenyl butazone which can be seen clearly in Figures 4 and 5. interactions pertaining to hydrogen bonding with amino acids in the relatively polar region, van der Waal’s interactions and hydrophobic interactions of the aromatic groups which found embedded into the hydrophobic cavities of the target proteins.

Computer based drug design on the basis of SAR and pharmacophores has become a useful tool for modern structurebased rational drug design .Inspired by the literature survey about the potentiality of acylhydrazone derivatives it was planned to design a series of N-[(1E)-2-substitutedphenyl-1-{N'-[(1E)-phenyl methylidene] hydrazine carbonyl}eth-1-en-1-yl]benzamides. Compound 6 showed similar binding interactions as that of standard drugs, Phenyl butazone and SC-5 at the binding sites of COX-2 suggest the possible COX- 2 inhibition mechanism. In silico evaluation including molecular properties like bioavailability, Lipinski’s rule of five reflected the oral bioavailability of these compounds. Good drug likeness and bioactivity scores further indicate the probable potentiality of these compounds as future drugs.

Copyright: © 2016 Banu BH, et al. This is an open-access article distributed under the terms of the Creative Commons Attribution License, which permits unrestricted use, distribution, and reproduction in any medium, provided the original author and source are credited. 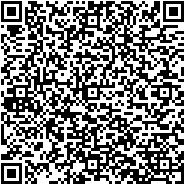