An Assessment of Seaweeds Diversity and Distribution at the Beach of Nathia Gali, Karachi, Pakistan

Copyright: © 2017 Qari R. This is an open-access article distributed under the terms of the Creative Commons Attribution License, which permits unrestricted use, distribution, and reproduction in any medium, provided the original author and source are credited.

The seaweeds resources were sampled from exposed shore of Nathia Gali beach, Karachi coast at low tide. The present data of diversity and biomass of seaweeds provide a comparison of two different periods i.e., from 1989 to 1991 and 2012. A total of 60 taxa were recorded in the coastal area of Nathia Gali; 14 belonging to chlorophyta, 15 to Phaeophyta and 31 to Rhodophyta. The green seaweeds viz, Caulerpa racemosa, Codium iyengarii and Halimeda tuna; brown seaweeds, Cystoseira indica, Iyengaria stellata Padina pavonica and Sargassum boveanum and red seaweeds Gracilaria corticata and Scinaia fascicularis were found to be the dominant species of Nathia Gali. The total biomass 66056.18 g. m-2 was recorded during the study period and the highest biomass was recorded in January (16551.79 g m-2) and the lowest in July (1276.3 g. m-2). In winters, seaweeds biomass and growth increased due to low temperature of air and seawater with low intensity of light and high dissolved nutrients. The richness of seaweed resources in the studied area is due to the intertidal rocks available on the coast but nowadays, there is lot of disturbance due to anthropogenic activities such as discharge of domestic and industrial waste; tanneries effluents; rainfall and associated pollutant from runoff; shipping and agricultural sources. These disturbances play vital role in changing the ecosystem which effects flora and fauna of the coast.

The floral components are represented by three groups of primary producers, the mangroves, sea grasses and the seaweed [1]. The macrobenthic algae are an important component of the marine ecosystem. They exhibit an enormous variety in size, color, form, and lifestyle and they are extremely rich in the sea. According to a very rough estimate there are more than 17,000 species of sea plants and 95% of them are algae [2]. To date, several investigations for the exploitation of seaweed resources in developed countries have been made about biomass and standing crop. More recently Faveri et al. [3] studied the temporal changes in the seaweeds flora in Southern Brazil and its potential causes. Hay and Villout [4] studied the seasonality of Undaria pinnatifida population in New Zealand waters. Jagtap [5] described the marine flora of Nicobar group of islands in Andaman Sea. Ballesteros [6] studied seasonal growth and production of deep-water population of Halimeda tuna in the Northwestern Mediterranean. Pedrini et al. [7] reported the marine algae of Trindade Island, Brazil. Basson et al. [8] also reported the benthic flora of Bahrain. Chock and Mathieson [9] quantified the standing crop and biomass variation of estuarine seaweed at Cedar point, Dover New Hampshire Maine, UK. Similar studies have also been conducted in other areas of the world such as, North Carolina [10], India [11], Dodger channel of Canada [12] and Central Puget Sound Washington, U.S.A. [13]. Josselyn and Mathieson [14] have reported the biomass variation of selected estuarine macrophytes at North temperate estuary, Falmouth Massachusetts, USA.

The seaweed resources are abundant around the rocky shores of Karachi. Many studies have been made on the standing crop and biomass of seaweeds like Shameel [15] served seaweed of from the coast of Lasbella, Pakistan. Saleem [16] and Saifullah [17] studied the distribution and biomass of marine algae along Karachi. Qari and Qasim [18,19] investigated the Seasonal change in the standing crop of intertidal seaweeds from the Buleji and Manora coast of Karachi. Recently Qari [20] studied Phytomass on natural bed of seaweed at Paradise Point, Karachi coast.

Pakistan is a developing country; the marine resources like seaweeds are under threat due to variety of pollutants. There are above 6,000 industries located in Karachi at different sites. According to an estimate all these industries contribute approximately 99% of the total industrial pollution beside the contamination from oil waste discharge [21,22]. Increasing concern on wrecking of floral resources deemed it necessary to study the seaweeds diversity and abundance for a better management of marine flora. At Nathia Gali of Karachi coast no any information on diversity of seaweeds although this coast has very luxuriant seaweed vegetation, therefore the present investigation deals with the seaweeds biomass, distribution, diversity of seaweeds species (Chlorophyta, Phaeophyta and Rhodophyta) of Nathia Gali coast Karachi, northern Arabian Sea.

The investigation was carried out at Nathia Gali that presents a very scenic point also known as Pacha, is situated at 24o50´ N, 66o 42.5´ E on the south western coast of Arabian Sea. It is not easily assessable; as a result it is still consist of undisturbed forms of flora and fauna. The jutting rocks lessen the force of the waves thus protecting the backwater beach and along with it the existing life. The beach starts with pale yellow coloured rocks at its front, the main boulder like forms, is exposed to the surface and slopes steep towards the sea. The sides of these rock formations are thickly covered with the biota especially rich in seaweed.

When the tide is low the back area is fully exposed while at high tides even the facing rock zone gets submerged with seawater.

Field surveys were undertaken to the selected sampling beach (Nathia Gali) of the Karachi coast over a period of four years from 1989 to 1991 and 2012 for the comparison of two data of different period. The seasonal distribution of seaweeds was studied by a wooden quadrate frame of one-meter square [23]. Each month fifty quadrates (ten feet apart) from low tidal mark to high tidal mark were randomly sampled in the intertidal belt. Phytomass falling inside each quadrate were harvested and studied for the composition and biomass. All seaweeds placed individually in prelabeled plastic bags and returned to the laboratory.

All collected seaweeds samples were carefully cleaned from mud debris and epiphytes, using seawater. For identification, the materials were sorted out on the basis of Anand [24,25], Round [26], Chapman and Chapman [27], Dawes [28], Morris [29], Dring [30]. The total and the differential biomass (wet weight) of each species was estimated after carefully scraping them and weighed with a fine degree of accuracy (0.001 g) and subsequently the biomass of each species was calculated and expressed in gram fresh weight per meter square (g. m-2). The average values of fifty quadrates were pooled and are used for comparing the condition in different seasons. The Shannon – Weiner diversity index of each monthly sample was calculated by using the formula on Excel program. Species richness and species evenness also calculated.

_ spp not found _* month not collected

_spp not found _*month not collected

_ spp not found _* month not collected

Table 5: Analysis of variance (ANOVA) for biomass of seaweeds at Natia Gali beach of Karachi. (DF is degree of freedom, F is the F-statistics and P is the probability level). 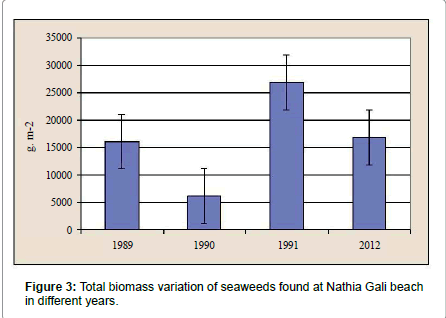 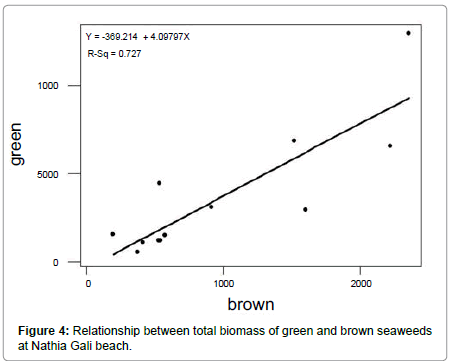 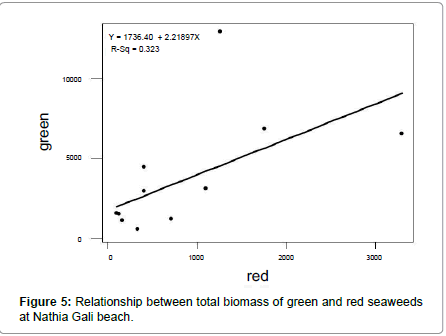 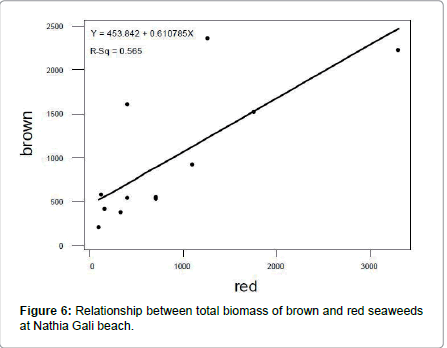 Seaweeds found in the present study were categorized into four groups based on their frequency of occurrence during the study period [31]. Species found mostly all year round i.e., nine to twelve months named as perennials and species found in the major portion of the year i.e., from six to eight months called pseudoperennials. Seasonal annuals were those species found in limited period of occurrence i.e., from three to five month and species restricted to only one, two or three months named as rare.

The detail account of biomass for each species is given below alphabetically as presented in Tables 1-3 for each group of seaweeds. 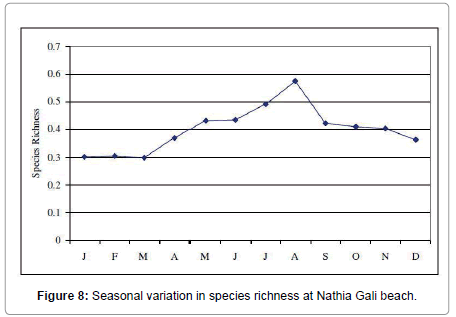 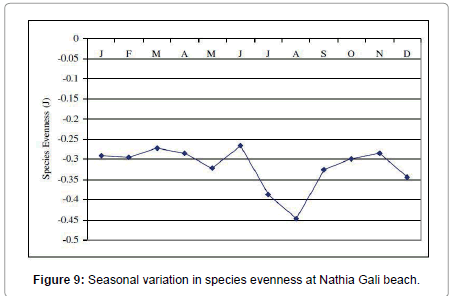 Seaweeds are important raw material in polysaccharides production. Most of them have very important economic value [36]. Michalak et al. [37] and Zia et al. [38-40] found that seaweeds could help to reduce the use of chemical fertilizer and improve physicochemical properties of the soil and to increase the plant growth. Gavino and Trono [38] reported that the seaweeds and their products are the third most important fishery export. From the present study, it is apparent that many economically and medicinally important species of seaweeds such as Gracilaria corticate, Hypnea musciformis, H. pannosa, Sargassum boveanum, Ulva fasciata etc., are richly found at this coast [39-42] but nowadays there is lot of disturbance due to anthropogenic activities such as discharge of untreated and partially treated domestic and industrial waste, coolant waters of industrial and atomic nuclear power plants and harbour activities such as dredging and cargo handling, the dumping of ship waste and other coastal activities. Therefore for the conservation of these resources it is need to control these pollutants and prohibited or ban on like these activities. The present comparative study of two different periods will be useful as new base line record for future floral studies on Nathia Gali coast.

Thanks and great regards to Prof. Dr. M. Shameel (Late) for help in identifying the species of seaweeds.