Appendicectomy for Appendicitis and Laparoscopy Training

Copyright: © 2017 Ray-Offer E, et al. This is an open-access article distributed under the terms of the Creative Commons Attribution License, which permits unrestricted use, distribution, and reproduction in any medium, provided the original author and source are credited.

Background: Globally, acute appendicitis is the most common cause of acute surgical abdomen with significant morbidity and mortality. Laparoscopy is a notable stride in the improvement of surgical care. Aims: To study the practice of appendicectomy in the tertiary hospital setting of a developing country to know who performs it, when and how. Patients and Methods: A retrospective study of all appendicectomies for acute Appendicitis performed in University of Port Harcourt Teaching Hospital (UPTH) from January 2007 to December 2012. Data were extracted from the theatre records on demographics, anaesthesia, cadre of surgeon, method of operation and operating time. Statistical analysis of data was done using SPSS version 20. Results: A total of 432 appendicectomies for acute appendicitis were performed during the study period. There were 205 males and 217 females with 10 unspecified cases. Four hundred and eight (98.6%) were by open method while 6 (1.4%) underwent laparoscopic appendicectomy. Senior registrars performed most appendectomies 255 (59%) while consultant surgeons performed 83 (19.0%) cases. Conclusions: Surgical trainees perform most of the emergency operations for acute appendicitis. The open method is routinely used however a structured training in laparoscopic appendicectomy especially for surgical trainees is recommended.

Acute appendicitis is the most common surgical emergency in our environment and other parts of the world [1,2]. The common underlying pathology is occlusion of the narrow lumen which may result from the following: lymphoid hyperplasia, faecolith, adhesions and kinking from repeated episodes of catarrhal appendicitis, foreign bodies, worms and carcinoma of the base of the appendix. This inflammatory condition of the vestigial appendix remains a significant cause of morbidity and occasional mortality despite extensive studies. A diagnosis can be made by clinical assessment however accuracy is aided by additional laboratory tests, scoring systems, radiological imaging and laparoscopy.

Laparoscopic appendicectomy is gaining prominence as a preferred operative method especially with uncomplicated appendicitis. Metaanalysis of randomized controlled trials concluded that laparoscopic appendicectomy was better than the open method in terms of postoperative pain, recovery, length of hospital stay and wound infection [3-6]. Aesthetics is better achieved with the small scars of port site incisions. In addition laparoscopy allows a panoramic examination of the abdominal viscera. This is especially important in the female patient where gynecological disease can present diagnostic dilemma.

In the general surgery practice of our institution, laparoscopic intervention has commenced but is not yet routine practice. The high prevalence of acute appendicitis with the need for appendicectomy provides a valuable opportunity to gain proficiency in basic therapeutic laparoscopy principles before graduating to advanced laparoscopic procedures. This study in the tertiary hospital of a developing country aims to study who performs appendicectomy, when and how?

This study was conducted in the University Teaching Hospital of the metropolitan city of Port Harcourt in Nigeria-an 840 bed tertiary health care facility that serves states of the South- south region of Nigeria especially Rivers and Bayelsa states.

All consecutive cases of appendectomy for acute appendicitis performed during the study period were included.

This is a retrospective study of all appendicectomies for acute appendicitis in University of Port Harcourt Teaching Hospital Port Harcourt Rivers State performed between January 2007 and December 2012. The theatre records of the hospital were used to extract data on cases. Data included demographics, date/time of surgery, cadre of performing surgeon, anaesthesia, method of operation and operating time.

A total of 432 appendicectomies for acute appendicitis were performed during the study period. There were 205 male patients and 220 female patients with 7 unspecified cases (Table 1), giving a male to female ratio of 1:1.1.

Table 1: Age and sex distribution of cases of acute appendicitis

The incidence of acute appendicitis was highest in the third decade of life 182 (42.1%) followed by the second decade of life 106 (24.5%).There was a mean age of 26.18 years SD 10.8. There was an average of 72 appendicectomies per annum mostly performed during the evening shift (Table 2).

Table 2: Yearly incidence of acute appendicitis and time of surgery.

Three hundred and forty nine cases (81.0%) were performed by surgical trainees with senior registrars performing over half of the case load (Figure 1). There is no record of a House officer as the performing surgeon. General anaesthesia with endotracheal intubation was predominantly used. 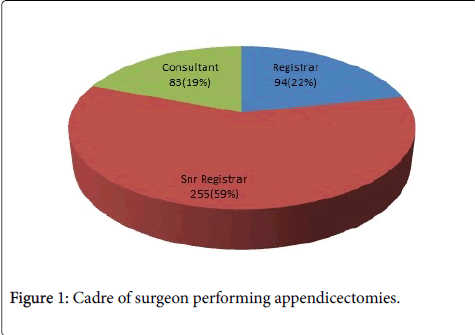 Appendicectomy for acute appendicectomy is one of the most common emergency surgical procedures performed worldwide. In our study there is an average annual incidence of 72 cases in comparison to studies on acute appendicitis showing 38.2 and 49.3 from tertiary hospitals in Northern and South-western parts of Nigeria respectively. The peak age incidence of acute appendicitis observed was the third decade followed by the second decade. This peak age incidence was not observed to vary with the sex of the patient however varying reports have been documented from different parts of the country [7,8]. A slight predilection for females of 1.1: 1 was observed in this study. This is however dissimilar to the trend of male predominance widely documented [7,9,10].

Worthy of note, is that trainee surgeons performed the highest number of appendectomies in this study with senior registrars accounting for 59% and registrars 22%. There was no record of a House Officer (Intern) as a performing surgeon but as an assistant surgeon. A UK audit of 557 hospitals also showed that appendicectomies in adults were delegated to junior doctors and 53% were performed by senior house officers and 42% by registrars [11]. It was observed that one quarter of all appendectomies in this study were performed during the night shift (Table II) when consultants are unlikely to be present. This may explain the long mean operating time as junior residents try to gain competency.

Appendicectomies were traditionally performed by the open method in 98.6% of cases. The practice of laparoscopic appendectomy is new in our environment. A pilot study of 6 (1.4%) cases was successfully performed during the study period with extracorporeal ligation of appendix base. None was performed during the night shift. A major reason for this was the logistic challenge of nurses shift duty. In the face of competing need of emergency cases for limited theatre space, daytime shifts which are better staffed are more convenient for laparoscopic appendectomy. A dedicated theatre space for laparoscopy is ideal [12].

This study suggests the need to emphasize laparoscopy in the postgraduate training curriculum of trainee surgeons. A structured training program involves a competency framework design for preoperative assessment of a surgeon’s skills before an independent laparoscopic surgery. This training includes learning anatomy specific to laparoscopic surgery for each organ, physiology of pneumoperitoneum, hand–eye coordination using a two-dimensional monitor and knowledge of instruments and equipment specific to laparoscopic surgery. The use of virtual reality simulator, porcine in vivo or ex vivo set ups and trainer boxes play vital roles in overcoming the crux of the learning curve [13,14]. It has been observed that simultaneous training of open and endoscopic surgery has a synergistic effect in the education of surgical residents as fine anatomy is learned through the magnified image on the monitor [15].

Appendectomy for acute appendicitis is a common abdominal surgery in our environment with trainee surgeons performing the bulk of surgeries. A well-structured training in laparoscopic appendicectomy for trainee surgeons in line with current standard in developed countries is recommended.