Background and objective: Non-motor symptoms (NMS) of Parkinson's disease (PD) are still underestimated and causative of disability and poor quality of life. Recently, it has been suggested that hearing impairment could be included into the spectrum of NMS, although both mechanisms and phenomenology are unclear. In this study we investigated the peripheral auditory pathway of PD, in patients with asymmetric rest tremor (ART) without dopaminergic denervation, and comparison with healthy controls (HC), aiming to detect differential alterations of cochlear functioning and medial olivocochlear system (MOC).
Methods: 23 PD patients, 9 with ART and 19 HC were assessed for auditory functions with clinical examination and Transient-evoked otoacoustic emissions (TEOAEs). PD and ART groups were also evaluated with Unified Parkinson's Disease Rating Scale (UPDRS) II-III and Hoehn and Yahr scale. One-way ANOVA analysis and Pearson's test were performed to measure differences between groups and correlations.
Results: TEOAE responses in PD patients were significantly lower compared to HC at 3 and 4 kHz, bilaterally. PD patients showed statistically significant lower TEOAEs at the same frequencies compared to ARTs. In addition, a MOC dysfunction in PD patients was observed. Conversely, no difference was found between ART and HC in all tests performed.
Conclusion: PD patients, differently from both ART patients and HC, show abnormalities of basal TEOAEs at the highest frequencies. Auditory dysfunction correlates to motor disturbances, suggesting an underlying dopaminergic pathogenic mechanism. Early recognition of hearing impairment may represent a tool for patient assessment and help in the differential diagnosis in ART patients.

Parkinson’s disease (PD) is a common neurodegenerative disorder, characterized by both motor and non-motor features. Non-motor symptoms (NMS) encompass a huge number of conditions, including cognitive, psychiatric, autonomic and sensorial disturbances, often occurring before the cardinal motor signs, difficult to treat and directly contributing to disability, poor quality of life and shortened expectancy in PD patients [1-3]. Therefore, an early recognition of NMS is fundamental in the diagnostic process. However, a better comprehension of the underling mechanisms is crucial to conceive novel therapeutic options for patients. Recent evidence included hearing loss into the wide spectrum of PD NMS [4]. The origin of hearing loss in PD has not been clarified yet; indeed it may be related to the physiological hypoacusis of aging, reaching 62% of population at the age of 85 [5]. Alternatively, it may also be determined by a specific impairment of neurotransmission of PD, resulting from the imbalance between glutamatergic and dopaminergic signaling [6]. Hearing loss could thus represent a peculiar sign of PD, being a candidate biomarker for the diagnosis and the progression of the disease.

The study involved a total of 51 subjects referring to the Department of Neurology of Tor Vergata University General Hospital in Rome, between January 2015 and December 2016. Subjects were divided into 3 groups: PD (n=23), ARTs (n=9), HC (n=19). Idiopathic PD was diagnosed in accordance with the British Parkinson’s Disease Society Brain Bank criteria [7] and confirmed with DaTscan. ART patients were enrolled from a cohort of subjects [8,9], previously referred to as “SWEDD” (scans without evidence of dopaminergic deficit) [10- 12]. As the nomenclature and definition of this group of patients is still unclear, we refer to this population as ART. ARTs had adult onset (>40 years) of asymmetric arm tremor with a rest component, normal DaTscan and MRI and at least 3-4 years of clinical and radiological follow-up. HC were healthy age-matched control subjects recruited from non-blood relatives of PD and ART patients who did not show any neurological signs. Exclusion criteria were: cognitive decline (Mini Mental State Evaluation, MMSE score<24), improper neck movements that could interfere with audiological assessment, previous history of otological/labyrinthic disorders, exposure to excessive noise, ototoxic drug consumption and diabetes. At the time of enrollment, all subjects signed an informed consent and underwent a clinical and neurological evaluation with a movement disorders expert. PD patients in “ON therapy” and ARTs were further assessed with Unified Parkinson’s Disease Rating Scale (UPDRS) pars II (considering daily living activities), UPDRS pars III (measuring motor performances) and Hoehn and Yahr scale (H&Y).

Enrolled subjects underwent an otolaryngological evaluation to exclude middle ear disorders, including the compilation of a survey on hearing problems in everyday life, otoscopic examination, acoustic impedance test and Pure-tone audiometry (PTA). Hearing loss was calculated considering each ear separately and for each pure tone frequency stimulation (from 125 to 8000 Hz). The intensity threshold of the acoustic reflex was determined for each ear using 500 Hz, 1.000 Hz, 2.000 Hz and 4000 Hz stimulus tones. The stimulus was presented either to the same ear as a compliance probe (ipsilateral reflex) or to the opposite ear (contralateral reflex).

In the same session TEOAEs in both ears of all subjects were also recorded, using Otodynamics ILO analyzer software (MAICO MI 34; Berlin, Germany). TEOAEs used a standard non-linear click stimulus of 80 μsec duration that was presented at a repetition rate of 50 Hz and a sound level 80 (± 3) peak equivalent dB SPL. The level of random noise was controlled by setting the automatic noise rejection at 47.3 dB in all tested subjects. All measurements were performed in a quiet environment. The otoacoustic emission probe was placed and calibrated using an automated measurement system before each test, then positioned in the external ear canal. Frequencies of 1, 1.5, 2, 3, 4, 6 and 8 kHz were studied.

Assessment of the MOC-induced effect (MOC inhibition) was performed on the basis of changes in OAE levels during contralateral acoustic stimulation (CAS). The size of the MOC effect was measured using the relative subtraction method (e.g. The MOC effect was given by level difference of OAE waveforms in dB between no-noise and noise conditions) [13]. Negative values reflect suppression of the MOC system (contralateral suppression), whereas positive values indicate otoacoustic emissions level enhancement during CAS.

The study was conducted in accordance with ethical principles of Helsinki declaration. All subjects signed informed consent. The study protocol was approved by the local Ethical Committee.

The auditory evaluation was conducted by considering both ears and all collected data were used for statistical analysis.

Differences in categorical and continuous variables were respectively calculated with the chi-square test and the one-way ANOVA test. The Bonferroni correction was used to counteract the problem of multiple comparisons (different frequencies for TEOAEs).

Correlations between audiological measurements and clinical data were assessed using parametric and non-parametric test as required. Pearson’s correlation was used to assess relationships between frequency and neurological scores.

Demographic and clinical data were presented as mean ± standard deviations for variables with a normal distribution (confirmed by histograms and Kolmogorov-Smirnov test) or frequencies (%) for categorical ones.

Demographics parameters of study samples are showed in Table 1.

Table 1: Demographic and clinical features of our study population.

The auditory evaluation was conducted by considering both ears and all collected data were used for statistical analysis.

The medial hearing threshold of patients and controls are showed in Table 2. No statistically significant differences were found.

Table 2: Median hearing threshold by PTA of the overall patients and controls (p=0.99).

Otoscopic examination and acoustic impedance test revealed that all subjects had a normal tympanogram (type “A”).

Table 3A: Left TEOAEs of patients and controls.

PD patients showed statistically significant differences at 3 and 4 KHz as compared to ARTs and HCs, bilaterally. ARTs did not differ from healthy subjects

Table 3B: Right TEOAEs of patients and controls.

Table 4A: Left TEOAEs with CAS of patients and controls.

Table 4B: Right TEOAEs with CAS of patients and controls. 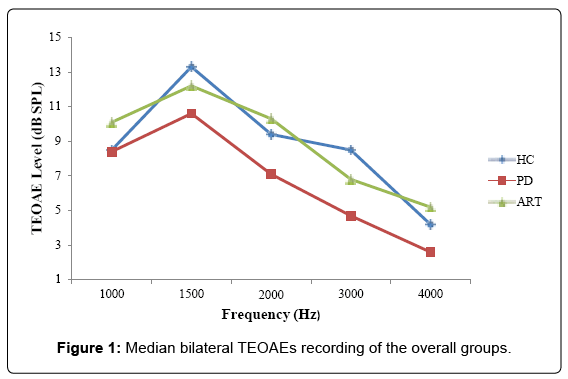 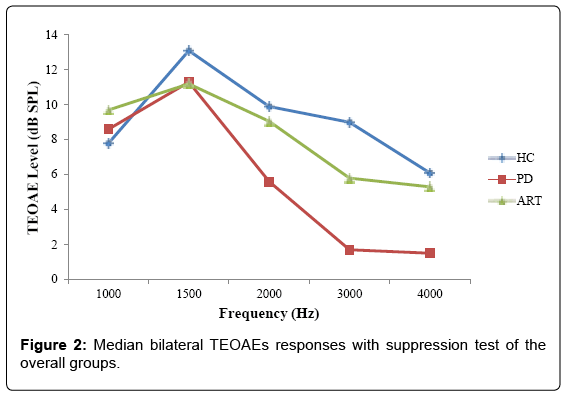 The MOC effect was calculated for the tested groups, using the relative subtraction method. In PD patient’s assessment of the MOC inhibition revealed a dysfunction of the MOC system supported by an increase in TEOAEs levels during CAS. Conversely, in the ART group, the MOC suppression was found to decline with frequency increase. These findings pointed out a well-functioning MOC effect during the contralateral suppression.

Hearing impairment frequently occurs in PD patients, and may therefore be considered in the wide spectrum of NMS [4]. Several lines of evidence suggest that hearing impairment may not only be due to the physiological presbycusis that occurs with aging, but could instead originate from a damage involving either the cochlea or the MOC, with a consequent impairment between dopaminergic and glutamatergic neurotransmission below the inner hair cells (IHC) [14].

Dopamine, released from lateral olivocochlear (LOC) efferent fibers, plays a crucial role in the modulation of glutamate release. Consequently, dopamine denervation would disinhibit glutamate exocytosis from synaptic terminals that in turn might exert a cytotoxic effect on primary auditory neurons. Dopamine receptors are also expressed on cholinergic medial olivocochlear system, that controls the motility of outer hair cells (OHC) and decrease the gain of the cochlear amplifier, but its role in hearing disorders is still unclear [15]. Indeed it has been recently shown that both cochlear dysfunction and hearing loss are levodopa-sensitive in PD patients [6].

In this study, we expanded our analysis on this yet poorly explored feature of PD, showing abnormalities of basal TEOAEs at the highest frequencies. This pattern of auditory dysfunction reveals a subclinical cochlear impairment and abnormal MOC suppression, which could indicate a lesion at any level of the medial olivocochlear reflex arc, including the cochlear OHCs or other afferent and efferent structures of the brainstem [13]. Indeed, accumulation of Lewy bodies, the abnormal aggregates of α-synuclein, has been demonstrated at brainstem level of PD patients [16], suggesting that central neurodegeneration may contribute to PD auditory dysfunction. Moreover, in accordance with previous findings [6], we also observed a significant association between basal TEOAE and UPDRS III, which supports the idea of a common pathogenic mechanism underlying motor features and hearing impairment.

Our comparative analysis involved a group of patients with ART, a condition often misdiagnosed with PD in the clinical setting, and previously referred to as “SWEDD” (“Scans without evidence of dopaminergic denervation”). This acronym was introduced to describe a set of patients initially diagnosed with PD, but in the absence of dopaminergic denervation and pharmacological response to levodopa or other dopaminergic agents. A correct diagnosis, however, is obtained after long period of ineffective treatments and a number of further examinations [17]. Here, we demonstrate that ART patients, conversely to PD patients, do not show significant alterations of TEOAEs levels and MOC system, thus presenting a normal reflex. More importantly, this finding further supports the dopaminergic origin of the hearing dysfunction observed in the PD group of interest. Hearing loss is significantly associated with depression and cognitive decline [4,18], which are two of the main NMS affecting the quality of life of PD patients [19] and therefore deserve an accurate picture in the clinical setting.

This study confirms the occurrence of hearing impairment in PD patients. It suggest that hearing loss falls within the spectrum of PD NMS, being the probable result of a dopaminergic dysfunction, which progresses along the disease course, in parallel with main motor signs. Differently from PD patients, hearing tests exclude a major cochlear dopaminergic involvement in patients with ART, providing supportive elements for the differential and early diagnosis between these two disorders.

OAEs and its suppression study represent valid, objective and accurate instruments for the analysis of afferent and efferent auditory functions in clinical practice of PD.

Copyright: © 2017 Di Mauro R, et al. This is an open-access article distributed under the terms of the Creative Commons Attribution License, which permits unrestricted use, distribution, and reproduction in any medium, provided the original author and source are credited.