Copyright: © 2017 Samira J, et al. This is an open-access article distributed under the terms of the Creative Commons Attribution License, which permits unrestricted use, distribution, and reproduction in any medium, provided the original author and source are credited.

Since the reflectors are favourable in the seismic records, and most of these records are impaired due to presence of noise particularly surface waves, therefore, applying the proper way to remove or weaken the noise with minimal damage to the reflectors in seismic data processing steps is important and undeniable. Attenuation of ground roll data with co-core trace transform method is the purpose of this article so that a two-dimensional image is converted into another one with the ρ and Ð¤ parameters. In the following the co-core trace transform method was applied on the synthetic and real data in an area in southern Iran. This method is able to decrease the noise by reducing the amplitude and increasing the signalto noise ratio. The results were compared with F-K finally.

Raw seismic data are always included unwanted energies. These undesirable energies known as noise in seismology. Presence of these noises in seismic data cause to damage an important part of the information about the signal reflection (reflector) and if that are not attenuated, would be a barrier to provide a good image of the subsurface. The presence of this noise can cause problems in the next stages of processing and reduces the quality of final image. Therefore, the attenuation of noises from the acquired data is one of the most important steps in seismic data processing in order to increase the signal to noise ratio.

The most common methods to reduce the surface noises have been introduced in seismic records which can transfer the data to a new space to create a separation between the reflection and the noise. Accordingly, the most important viewpoint in reducing the noise is to find a space in which the signal to noise can be separated in an appropriate manner. As the surface waves are the most important and most complex noises in seismic data, the attenuation of these noises effect well on the quality of the final processed data. Despite this importance, because of differences in noise data in different areas, different ways develop to decrease the noises. In this study, for the first time the co-core trace transform method was applied on the synthetic and real data in an area in southern Iran.

Functions on the trace lines are calculated in the co-core trace transform method. In addition to propagation path, power distribution [1]. Domain differences in calculation and trying to separate the accurate surface waves is performed within a trace transform and in this study and finally leads to use the co-core trace function (CCT). A two-dimensional seismic record u (x, t) is considered (Figure 1) where x and t indicates the distance and time respectively. 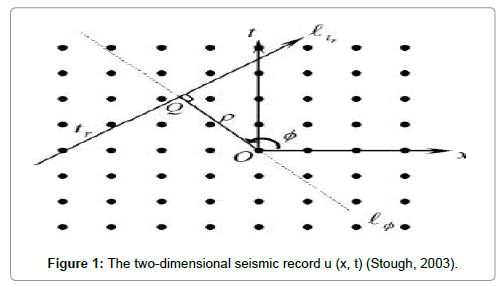 O start point is located at the center of the seismic record in trace transform. Trace line

is a straight line that passes the two-dimensional record and

is the distance from trace line

According to the seismic signals u (

) along the trace line

, the midpoint of line (barycenter) are defined as follows

The co-core weight coefficient are defined as follows

Then consider as a weight of Radon function and we introduce the operator CCT as follows:

The above Equations have been defined on the trace line

which are both ρ and Ф such as

and based on the two-dimensional seismic data u(x,t), CCT transformer

and the co-core weight coefficient which are displayed like CCT(ρ,ɸ) and

respectively [3] So we have:

Using equation (5), equality (4) can be written as follows

CCT(ρ,Φ) is considered as an image of u (x, t), CCT(ρ,Φ) is a one-dimensional Fourier transform (1DFT) in image CCT(ρ,Φ) and

is a two-dimensional Fourier transform (2DFT) in image u(x, t). Then we have:

Where ɸ can be any desired angle, we have:

If certain forms of Fourier transform are replaced to the equation (7), we have:

Eventually the reverse co-core trace transform is obtained as follows:

Using equation (11), the original data with the matrix of co-core weight coefficient

are recovered [4]. The above equations were loaded in MATLAB and have been applied on synthetic and real data eventually.

To check out the benefit of using co-core trace transform method, synthetic data have been analyzed. Synthetic data includes reflection events and surface waves which were first made separately and identified all shapes by applying co-core trace transform method, then we take action to remove noises by merging both reflection events and surface waves (Figure 2).

Figure 2: (a): Synthetic data (b and c): after applying the reverse co-core trace transform.

In part (a) reflection data have appeared in the form of hyperbolic and surface waves have been in the form of linear. In part (b) after applying the co-core trace transform method, the noises have been gathered in dark areas which should be removed.

In part (c) by applying the reverse co-core trace transform, part (b) is restored and the surface waves are weakened.

In this section, the way which was did on the synthetic data, applied on the real data in one of oil fields in southern Iran as well. In this sampling, the sampling rate is 2 ms and the distance of receivers is 25 m in a plain. (Figure 3). In part (a) Input data which includes reflection events and surface noises are shown. In part (b) a significant amount of noises are weakened by applying the co-core trace transform and inverse transformation on this data. In part (c) F-K filtering method has been applied on real data which compared with the co-core trace transform method, not only the noises were weekend, but some new noises are observed [5].

In this study, Attenuation of ground roll data with co-core trace transform method has been carried out by keeping the reflection events and the following results were obtained:

1. The concentration of reflection events in arched sections of sine curves and the ground roll data in sine graph were as a point which were removed by applying the reverse cocore trace transform.

3. Comparing the amplitude spectrum shows that SNR Co-core approach is more than FK. In other words, the co-core trace transform method is a good way to attenuate the noises.