Copyright: © 2017 Renata Turska-Malińska, et al. This is an open-access article distributed under the terms of the Creative Commons Attribution License, which permits unrestricted use, distribution, and reproduction in any medium, provided the original author and source are credited.

Introduction: Cleidocranial dysplasia CCD is a rare genetic disorder connected with mutation in the gene RUNX2. The characteristic feature of this syndrome is a triad of symptoms: hypoplasia or aplasia of clavicles, cranial defects, persistent decidous teeth and multiple supernumerary teeth with consecutive failure in succedaneous teeth eruption. Objective: The aim of the study is to present a CCD patient, in which during orthodontic treatment there was performed a comprehensive hearing test. Case report: The paper presents a 15-year-old patient in whom intraorally there were stated only 4 first permanent molars and 1 lower central incisor while all the remaining teeth were decidous. The CBCT showed 11 impacted supernumerary teeth. Treatment started by surgical exposure and orthodontic traction of the upper incisors into the arch. The introduced fixed appliance seems to be a good solution to pull down impacted anterior teeth. An audiological examination of the patient with CCD revealed normal hearing on the border of norm, however tympanometry may suggest a defect of the auditory ossicles. Conclusion: Active long-term treatment that requires cooperation of many specialists is the correct procedure in CCD cases.

Cleidocranial dysplasia CCD is a rare congenital syndrome (1: 200 000 or 1: 1 000 000), in 30 - 40% it occurs as a spontaneous new mutation. CCD has an autosomal dominantly inheritance, due to the mutation of RUNX2 gene, localized on the short ramus of 6p21 chromosome. This gene is responsible among others for proper teeth morphogenesis, however study of the pathway from gene mutation to the phenotype is still under intensive investigation. There is a hypothesis that PDL cells in CCD patients have impaired capacity to influence osteoclastogenesis connected with the lack of alveolar bone resorption and delayed permanent teeth eruption [1-3]. Hyperdontia in permanent dentition in CCD is typical. Dental anomalies are present in more than 93% of cases. The decidous dentition is usually normal while numerous supernumerary teeth delay or make impossible the eruption of permanent teeth [3-5]. CCD is also connected with disorder of ossification both intramembraneous and endochondral [6]. The degree and kind of anomalies in the phenotype depends on the mutation degree. Pathognomic is a triad of features: aplastic or hypoplastic clavicles, supranumerary and impacted permanent teeth and delayed closure of cranial sutures. Moreover clinically CCD is characterised by short stature and often defects of other anatomical structures as paranasal sinuses or middle ear. Impaired hearing is mentioned in the literature as a symptom due to disturbed structure of auditory trumpets but also to narrowing of the external auditory canal which may influence on recurrent upper airway, sinuses and ears infections. Recurrent ear infections may lead to hearing impairment. The lack of ventilation of the tympanic cavity in the middle ear is is a direct cause of conductive hearing loss and this type of defect may occur in CCD patients [7].

The aim of the study is to present a CCD patient in whom during active orthodontic treatment there were performed extensive audiologic studies because of clinically observed decreased sensitivity of hearing. Audiological diagnostics and treatment of craniofacial abnormalities in cleidocranial dysplasia is recommended.

A 15-year-old patient reported to the university clinic for orthodontic treatment. Anamnesis, clinical and radiological testing were conducted. A plan for surgical and orthodontic treatment and treatment stages. The plan assumed staged removal of persistent deciduous and supernumerary teeth in individual quadrants and the further orthodontic movement of proper permanent teeth starting from the upper incisors.

Persistent deciduous incisors were extracted under local anaesthesia. After detachment of the mucoperiosteal flap, two supernumerary teeth on the palatal side were removed; the incisal edge of one of them was pointed towards the nasal cavity. Adhesive orthodontic buttons with hooks bent from thin ligature wire were attached to the teeth 11 and 21 positioned high in the vestibulum and the wound was closed – a closed technique was performed. A rigid maxillary arch with ball clasps in its labial part pointing downwards and forwards was used to bring the teeth into their correct positions. On the palatal side the Nance button was applied to anchor the braces. The teeth were brought into alignment using an elastic traction. After five months, the incisal edges approached the arch (Figure 3). During the orthodontic treatment, hearing impairment was diagnosed clinically and the child was referred to the Hearing Care Unit at Poznan University of Medical Science. 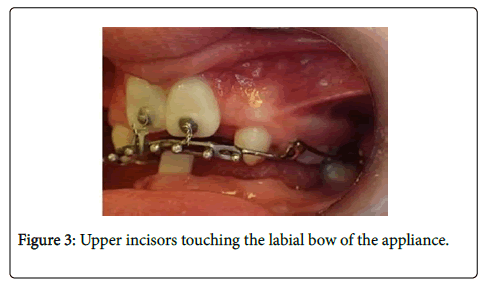 Figure 3: Upper incisors touching the labial bow of the appliance.

Audiological tests were conducted based on Jerger’s cross check principle [8]. In practice, this means that the result of one test is confirmed by the results of successive tests. Only the results that were convergent were relevant. Prior to the testing, otoscopy was performed to assess the patency of the internal auditory meatus, test the condition of the tympanic membrane and exclude contraindications to testing, i.e., the audiological testing was preceded by laryngological examination. Subjective testing included tonal audiometry, which was performed to assess air and bone conduction hearing threshold levels. Objective testing involved tympanometry and acoustic reflex test, distortion product otoacoustic emissions (DPOAE) and auditory brainstem response (ABR). Tonal audiometry revealed mild, symmetrical, bilateral conductive hearing loss. The average hearing loss measured at 500 Hz, 1000 Hz, 2000 Hz and 4000 Hz was 15 dB HL in the right and left ears for air conduction, with a measurement accuracy of ± 5 dB. The average bone conduction hearing threshold level was 0 dB HL in both ears (Tables 1 and 2).

Tympanometry was performed to assess the condition of the middle ear – the mobility of the eardrum and the ossicles. The As gradients obtained were 0.23 in the left ear and 0.31 in the right ear.

Acoustic reflexes recorded at 500, 1000 and 2000 Hz were within the normal range. The results of DPOAE recorded for both ears were normal – pass.

The hearing threshold in ABR for a click-type stimulus of 2-4 kHz (2-4 kHz) was 20 dB HL with elongated latency of 7.5 dB; 8.3 UL, which confirmed the results of tonal audiometry.

The audiological examination of the CCD patient indicates borderline hearing loss, but tympanometry may suggest defects of the auditory ossicles, which are likely to occur in the skeletal defect syndrome in CCD patients [9,10].

The primary problem in the treatment of DCC patients is the presence of multiple supernumerary teeth and associated dislocation of permanent teeth along with delayed dental age. There are also decreased amounts of calcium and phosphorus in the enamel promoting tooth decay [1], which was confirmed by the condition of the teeth in the case presented. Radiological examination, and CBCT in particular, is invaluable in the diagnosis of CCD as it allows for accurate localization of persistent teeth and an assessment of bone structure which usually has dense bone trabeculae. CBCT is preferred in young patients due to lower radiation doses than in conventional tomography and excellent image quality [11,12].

By the middle of the twentieth century, deciduous teeth were left and prosthetic restorations were used [13]. At present, the treatment plan involves the removal of retained deciduous teeth and persistent supernumeraries [14,15]; a closed technique simulating natural tooth eruption is preferred [16]. After removal of retained deciduous and supernumerary teeth, various orthodontic methods can be used to bring impacted teeth into their correct positions, such as removable braces with elastic tractions of 60-90 g [11], fixed transpalatal arches, thin-wire braces with elastic tractions and skeletal anchorage [14]. The common upper jaw hypoplasia implies the need to use headgear and/or expanders in orthodontic treatment [17]. In the case described in this work, retained deciduous and supernumerary teeth were removed and the remaining teeth were corrected using a fixed rigid arch similar to that described by Bechtold [13] yet in an individually modified version.

Developmental disorders of the jaw and dental anomalies may affect hearing sensitivity. Literature contains little information about hearing loss in CCD children. The disorder is most often detected in casual situations in young people [18]. In the case described in this paper, hearing loss was clinically revealed, but a detailed examination showed mild conductive hearing loss not exceeding 20 dB HL. This kind of hearing loss does not require hearing aids. Hearing aids are required in children when the hearing loss exceeds an average of 30 dB HL. The patient and her parents did not notice a significant hearing impairment, impeding the functioning of the patient, but the orthodontist clinically observed impaired hearing and diagnostic tests were therefore performed. An interesting finding is suspected otosclerosis – a disease that affects the ossicles and most often occurs in adult females. Hearing loss of up to 20 dB HL, regardless of age, requires regular monitoring of hearing status, which was recommended to the patient's parents.

1. Orthodontic treatment in CCD patients involves the removal of supernumerary teeth and bringing teeth into alignment.

2. Monitoring of hearing status should be a standard diagnostic procedure in CCD children, since hearing is extremely important in child development.