Copyright: © 2016 Ramakrishnan P, et al. This is an open-access article distributed under the terms of the Creative Commons Attribution License, which permits unrestricted use, distribution, and reproduction in any medium, provided the original author and source are credited.</

A case diagnosed as Cleidocranial dysplasia recently reported to the Oral and maxillofacial radiology clinic at our institution here for radiographic evaluation. The patient was exposed for a true lateral view of the skull which revealed a “beaten copper appearance” involving his skull.

The beaten copper appearance is usually associated with premature craniosynostosis and increased intracranial pressure [1]. Cleidocranial dysplasia has always been attributed with features like patent, persistent fontanelles and/or delayed closure of the sutures. Hence, the appearance of a beaten copper appearance associated with craniosynosotosis and increased ICP is usually not possible in cleidocranial dysplasia and has never been reported and demands documentation. In our case we have noted a radiographic “beaten copper appearance” in the calvaria in addition to other commonly reported clinical features of cleidocranial dysplasia like aplastic clavicles, prominent chin because of an underdeveloped maxilla and a relatively prognathic mandible (Pseudoprognathism),in addition to an unusual hypermobility of the shoulders (Figure 1). 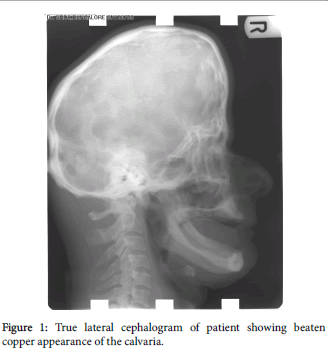 The skull was brachycephalic and macrocephalic, with turricephaly (tower-shaped head) and exhibited frontal, parietal and occipital bossing giving the skull a large globular shape. He also showed madarosis, hypertelorism, apoptosis of the right eye and a depressed nasal bridge. The midface was depressed. Intraoral examination revealed completely edentulous upper and lower jaws with a narrow high arched palate and fissured tongue. Orthopantomographic examination of the maxillomandibular complex revealed, excessive deepening the sigmoid notch causing an elongated appearance of the coronoid process with a slight upward and posterior curvature (Figure 2). 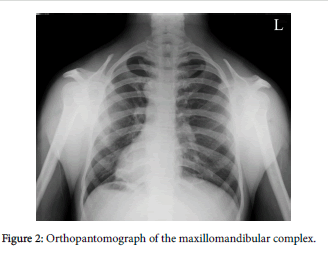 Figure 2: Orthopantomograph of the maxillomandibular complex.

A narrow ascending ramus with nearly parallel borders and coarse trabeculation of the bone was appreciated. A downward curvature of the zygomatic arch is noticed, best seen on the left side. Also increased density of the ascending ramus is noted between the anterior border of the mandible and the inferior dental canal. On a true lateral skull radiograph, the appearance of wormian bones are seen and a deepening of the sigmoid notch is noted. Thickening of the calvaria of the skull is observed and in addition to it, the hypoplastic appearance of maxilla was clearly noted on the radiograph. Chest X-Ray revealed a narrow thorax with complete aplasia of the clavicles. The ribs appeared normal with a normal vertebral component. A routine blood profile was performed and revealed normal renal and liver function tests, Electrolytes, Hemoglobin and blood cell counts. In addition serum and 24 hr urine examination of phosphorus, calcium, creatinine and uric acid were also found to be normal. The thryroid profile also did not reveal any abnormalities (Figures 3 and 4). The 54 year old patient underwent total extraction 30 years ago and has been a denture wearer ever since. He only wanted his dentures replaced for wear and tear and is otherwise asymptomatic.