Copyright: © 2012 Hsin G, et al. This is an open-access article distributed under the terms of the Creative Commons Attribution License, which permits unrestricted use, distribution, and reproduction in any medium, provided the original author and source are credited.

Background: Institutional autopsy rates have fallen in recent years. Significant variability in autopsy rates by venue of care has been described.

Objectives: To compare institutional autopsy rates by treatment specialty and venue in the Department of Veterans Affairs and to the community. To explore the role of palliative care in autopsy inquiries.

Conclusions: VA autopsy rates show significant variation across venues and specialties, but are still generally higher than in the private sector, although still low against historic norms. Significant changes in education and processes regarding autopsy inquiry must take place.

In recent decades autopsy rates have declined dramatically and numerous writers have lamented the “death” of the autopsy [1-6]. In this paper we compare autopsy rates for veterans dying in Veterans Affairs (VA) facilities by treating specialty and venue. Our primary purposes in doing so are:

1. To compare institutional autopsy rates across venues and treating specialties in terms of the probability of receiving an autopsy including hospice.

2. To compare these rates to published rates in the private sector.

3. To determine if autopsy rates have stabilized or are continuing to decline in recent years.

A major argument for the declining autopsy rate in the literature has been that the costs of autopsies to families and hospitals are generally uncompensated [4,7,8]. In the VA, where costs are borne by the Department of Veterans Affairs, this is not an issue for patients and families. Barriers such as cost or coordination with community pathologists that might exist in the private sector to obtaining autopsies in nursing homes are also minimized in the VA, which functions as an integrated healthcare system. The VA provides a unique opportunity to make such comparisons. As a healthcare system the VA is strongly supportive of autopsies. VA policy formally requires that “permission to perform an autopsy must be requested in every instance when a patient dies while an inpatient at a VHA facility.” [9]. Thus, we might expect higher autopsy rates in the VA with less variance in rates among institutional venues as compared to the private sector.

Hospice and palliative care physicians working inside and outside the VA are frequently called upon to care for those at the end-oflife. The request for and consent of autopsies is certainly a part of the practice for many palliative care professionals. The findings open an opportunity for further discussion about autopsies and end-of-life care, and what role should palliative care clinicians have in terms of communication with patients and families regarding autopsies.

A retrospective analysis was conducted of institutional deaths in the VA during fiscal years 2006 and 2007 (Oct 1, 2005-September 30, 2007), as classified by venue (acute care or nursing home) and treating specialty, using data available through the VHA Support Services Center (VSSC), a VA intranet database of patient workload. The acute care treating specialties analyzed included general medicine, general surgery, medical, and surgical critical care, as most acute care deaths occurred in these specialties and their respective venues of care, inpatient medical wards and ICU’s. Other treating specialties and venues (such as rehabilitative medicine and spinal cord injury units) which are also included in the same VA acute hospital database were excluded from our analysis because few deaths occurred in them and because they would not generally be considered acute hospital care workload in the private sector. In the VA’s Community Living Center (CLC) venue, which is analogous to community nursing homes, nursing home treating specialties included the general classification of nursing home patients and a treating specialty identifying patients as meeting hospice criteria. General medicine was treated as the reference group, as the greatest percentage of institutional deaths (28%) was in this group. Study population accounted for 92.4% of all deaths during the study period.

All deaths were classified as being with or without autopsy. A chisquared analysis was used to compare autopsy rates among treating specialties and odds ratios were calculated, comparing treating specialties to autopsy rates on the general medicine treating specialty. (Primer of Biostatistics 5.0 software) National VA institutional autopsy rates from 1998-2007 were also determined using this database, subsequently trended, and tested for significance using linear regression. (SPSS 15.0 software) Two different softwares were used for data analysis since the chi-squared analysis was easily accomplished with a basic biostatistics program, while the regression analysis required the use of more powerful statics software. As this study analyzed decedent data, commonly available to VA practitioners, which includes no personal identifying information, our Institutional Review Board (IRB) determined that IRB approval was not required. Approval was obtained from our VA Research and Development Committee.

Autopsies were recorded for 7.4% of all deaths studied. Autopsy rates by treating specialty ranged from a high of 15.7% for the surgery ward to a low of 3.7% for nursing home patients classified by the hospice treating specialty. 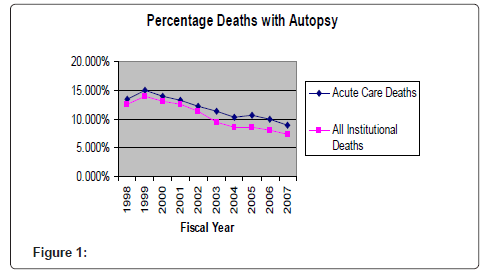 These results are not surprising. Higher autopsy rates have been correlated with unexpected death and younger age [10,11] and thus one would expect to find higher rates in acute care as compared to the nursing home. In a system like the VA which encourages/requires autopsy requests and in which autopsies are performed at no cost to families, one would expect to find higher autopsy rates than in the private sector. The hospital autopsy rate is still remarkably low relative to historic norms. In 1964 the national hospital autopsy rate was 41%, falling to 15% in 1983 [12]. By 1994 a survey of national hospitals revealed that 50% had autopsy rates at or below 8.5% [13].

These results suggest that having an autopsy performed appears to be highly dependent upon where a person dies, despite the facts that in the VA system access to autopsy services is readily available to all patients dying as inpatients. While not surprising, this is disturbing. We do not presume to know what proper autopsy rates might be. The literature reviewed, while largely calling for more autopsies, is remarkably lacking in providing any standards by which autopsy rates might be evaluated in terms of appropriateness. From a palliative care perspective, we would hope that rates obtained by facilities would reflect first and foremost patient and family preferences for autopsies and secondarily the potential value of autopsies to contribute to medical knowledge. Both of these factors would seem only weakly correlated with where a person dies.

While much attention has focused on why individuals might decline autopsies, inadequate attention has been paid to reasons why patients and families might desire an autopsy. Three major reasons patients and families might desire autopsies stand out: 1) to resolve any diagnostic uncertainty and to confirm the appropriateness of actions taken [14], 2) to evaluate for occult disease, such as heart disease, dementia, and cancer, that might suggest a genetic risk to descendents [14,15], and 3) as an altruistic contribution to medical science [9]. From this perspective inquiry about autopsy is less a matter of consent for something the physician desires and more a matter of eliciting personal and family care preferences, a tenant to which palliative care strongly subscribes.

This study is limited in that we did not attempt to control for other variables that might influence the probability of having an autopsy performed - disease process, circumstances of death, decedent demographics, academic status of medical centers, and patient and family preferences regarding autopsy [10,11]. More importantly, we have no idea how many patients or families were actually counseled regarding autopsy as an option. Most relevant literature cites only autopsy rates, not the percentage of patients or families who were approached and counseled, even though permission for an autopsy must be granted, except where required by a medical examiner [10]. While some studies cite reasons families might decline an autopsy, arguably the more important statistic is how often they were actually asked and accepted and perhaps even how they were asked [14,16]. A recent study by Combes and colleagues suggests that, when asked, a high percentage of families actually agree to autopsies [17].

Three major reasons have been suggested for declining rates of inquiry regarding autopsy - a change in accreditation requirements for autopsies, associated cost burdens, and the changing role of pathologists [4,7,8,10,18]. While acknowledging the probable importance of these factors, we believe greater attention to education and system issues regarding autopsy inquiries could make a significant difference in ensuring that preferences are respected and autopsies remain a vital component of medical care. Palliative care clinicians can and should play an important role in this.

Studies of medical students and residents have generally found that trainees acknowledge the value of autopsies, but also are reluctant to make inquiries. Attitude surveys have found that trainees find the task unpleasant, are concerned with upsetting families, and believe they have been inadequately prepared to conduct inquiries and answer family questions [19,20]. Sherwood and colleagues in a survey of practicing physicians found that few had any formal instruction in how to inquire about an autopsy [21].

Significant efforts have been made in the hospice and palliative care literature regarding how best to communicate bad news and deal with other difficult encounters with patients and families at the end-of-life. However, the topic of communication skills regarding inquires about autopsies has been almost completely neglected [22]. Further curriculum development in this area is clearly needed and further research is needed on the impact of training on autopsies both quantitatively and qualitatively.

If inquiry about autopsy as a patient and family option should be the standard of care (as compared to pushing for or obtaining some percentage of autopsies as previously required by the JCAH), then, as McPhee noted in an article over a decade ago, this will only happen if major changes occur in processes surrounding inquiries, autopsy procedures, and family follow-up [23]. While a detailed discussion of such changes is beyond the scope of this report, we highlight below some specific issues that would need to be addressed:

• When should an inquiry be made? Must inquiries be postmortem? Given that most modern deaths can be anticipated, should inquiries be made to the extent possible prior to death?

• Who should be asked? Should competent, terminally ill patients be asked about autopsy as an option or should permission remain the responsibility of next-of-kin?

• Establish standards by venue for autopsy inquiries and track the percentage of deaths in which an inquiry was possible and made through quality assurance activity.

• Development of educational materials, which would summarize potential benefits (and possible burdens) of autopsies both to the family and the healthcare system in a balanced manner.

• Establish a mechanism for communicating and interpreting autopsy results to family members and answering their questions.

• Ensure that both inquirers regarding autopsy and clinicians (pathologists and others) who will communicate results to family members are competent in their communication skills.

The authors’ work is supported by the VA Palo Alto Health Care System.