Availability of Pain Medication for Patients in the Middle East: Status of the Problem and the Role of the Middle East Cancer Consortium (MECC): Implications for other Regions

Copyright: © 2012 Silbermann M. This is an open-access article distributed under the terms of the Creative Commons Attribution License, which permits unrestricted use, distribution, and reproduction in any medium, provided the original author and source are credited.

In the Middle East the majority of cancer patients (70%) are diagnosed with advanced stage disease- LATE PRESENTATION.

For these patients, the only realistic treatment option is pain relief and palliative care, except for Israel and Turkey, in all other Middle Eastern countries there is still a lack of governmental policies recognizing palliative care. As a result in most Middle Eastern countries the consumption of opioids is either virtually negligent or very low (Table 1). By and large, Fentanyl is currently the opioid of choice whereby its consumption comprises 60-80% of all opioids consumed, whereas that of Morphine is negligible (Table 2). While comparing the most recent data with those of a decade ago, it can be noted that there is an increase in the consumption of opioid, but it is still far behind that of those of the USA (Figure 1). It is, therefore, clear that there are large disparities in the consumption levels of opioids in Middle Eastern countries, versus developed countries.

The ACM is a morbidity level corrected measure for the adequacy of the consumption of opioid analgesics with an arbitrary standard, the average consumption in the top 20 countries of the Human Development Index, whereas this average is set equal to 1. 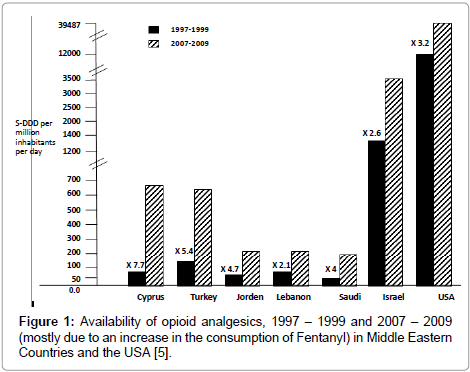 Taking these facts in consideration, I fully support Foley’s statement that the issue of cancer pain prevention ought to be addressed as an integral part of a comprehensive cancer control program [1]. Further, in this meeting Holland clearly indicated to the very close association between cancer and mental disorders such as depression and/or anxiety; and added the need to monitor the levels of distress in cancer patients [2]. Therefore, one should not disassociate physical pains from emotional distress, as both contribute to the overall suffering of the patient. And indeed, Benzodiazepines are being used in an increasing quantities; both auxiolytics as well as sedative-hypnotics, in Middle Eastern countries (Figures 2 and 3). The latter are used in larger quantities in Cyprus and Israel which have the largest population of elderly people. 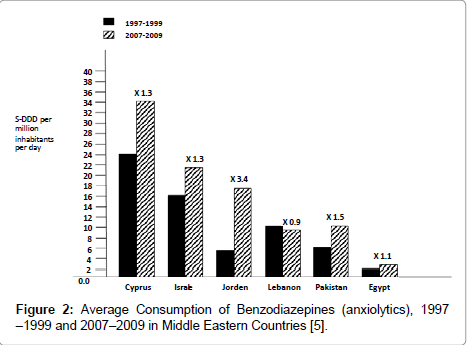 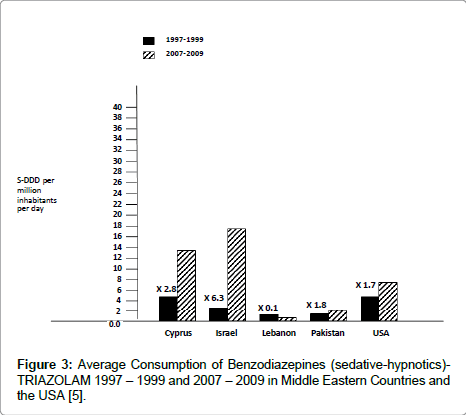 In the Middle East it is not uncommon that terminal cancer patients suffering from bone metastases; don’t complain about pains but appear to internalize the fact that pains are part of the disease and accept it. In these countries non-pharmacological modalities are being used to control physical pains, but not always emotional suffering. It is; therefore, clear that the assessment of both pains as well as distress should become a routine practice by recording these 5th and 6th vital signs respectively.

Barriers to Palliative Care and Pain Management in the Middle East

1. Lack of health policies in support of palliative care. MECC is instrumental in promoting processes leading to positive decisions in Parliaments by Regulators & Policy Makers; thereafter, implemented by the Ministries of Health.

2. Lack of relevant training to health care professionals – at all levels: Undergraduate, postgraduate and during specialty training of oncologists and nurses. This barrier, however, is not unique to the Middle East.

3. Poor accessibility of essential palliative care drugs. These are at least in part; available in Tertiary Care Facilities, but not in Primary Health Care Facilities in the community, and that is what concerns us most.

Therefore, Physicians and nurses not only in hospitals, but also in the community should be trained with at least the basic principles of palliative care.

To further illustrate the above problem, let us take as an example pediatric oncology patients in various Middle Eastern countries:

6. Pediatric Patients in Turkey treated in the Pediatric Oncology Services in Ankara, Istanbul and Izmir

In all these countries, pediatric cancer patients receive very good treatment in the above mentioned institutes. However, following their return to their communities, the local pediatricians or family physicians refrain from treating complications such as febrile neutropenia.

Moreover, in the region, because of multiple traditional and social reasons, most patients prefer to die at home – not in Medical Centers. Therefore, taking into account the above situation along with local cultural practices, and the fact that most countries have limited resources; we feel that home-based services should become a high priority.

Additional Barriers to Palliative Care in the Middle East

1. Education of the public, while trying to overcome the opioidphobia that still prevails in the region.

2. The Issue of the perceptions of cancer and opioids, faces us with a double taboos and stigmatization.

These barriers existed in the US 20 years ago, but are still valid in most countries in the Middle East.

To the best of our knowledge and understanding these existing taboos and stigmas are not solely culturally- related, and, therefore, should be dealt with by an ongoing process of education; since, the public, at large, still considers cancer an inherited - lethal disease. Another example of stigmatization that one experiences in the Middle East refers to the feature of late presentation:

While visiting a young female patient who was at a terminal stage of breast cancer, she was asked as to why she had waited so long prior to seeking the advice of a doctor.

Her response was: “if my neighbors would have known that I have cancer, my daughters would not have a chance to marry”.

3. Protective attitude of the patient’s family- disclosure issues. In order to promote the consumption of opioids, care givers need to improve communication with patients and families, thereby explaining the advantage of using these drugs.

We feel that the most urgent task in the Middle East is to educate and train physicians and nurses about pain assessment and management.

So, where is MECC standing with regard to this situation?

MECC is involved in promoting the consumption of pain medication through the following measures:

1. Regional didactic courses which are aimed at Hospital Staff of the following services: Oncology, Anesthesiology, Internal Medicine and Pediatrics.

MECC activities are not confined to its original member states:

But involves countries expanding from the Maghreb (North Africa) via the Mashraq (Middle East) and the Gulf States to Central Asia (Pakistan, Afghanistan).

New palliative care initiatives have been recently established in:

The Middle East is currently undergoing unprecedented historical social turnabout; yet, these geopolitical changes do not deter professionals from seeking training and education in order to either develop new supportive care services, in hospitals and communities; or upgrade existing ones.

Such cross-border collaborations in the region take place regardless of cultural, ethnic or political differences.

It is, therefore, our conviction, that the MECC model can serve as a case example for other regions globally.