Introduction: Parapharyngeal space (PPS) is one of potential confined fascial planes of head and neck that may be involved by various pathological processes. Being rare, they represent an ominous challenge in its clinical assessment and appropriate surgical intervention.
Material and methods: A study of 14 cases of parapharngeal space tumors (PPST) which presented to our tertiary care Institute from January 2013 to January 2015, were included in this study. All cases were studied by their clinical examination, fine needle aspiration cytology, radiology (computerized tomography and magnetic resonance imaging), extent of excision, postoperative complications and definitive biopsy. All patients underwent surgery by transcervical approach and were followed up for a minimum period of 6 months.
Results: The most common tumour of the parapharyngeal space was pleomorphic adenoma (n=7), followed by schwannomas (n=5), and carotid body tumour (paraganglioma) (n=2). Twelve patients were operated via extracapsular dissection (ECD), and two patients with intracapsular dissection (ICD). Post-operative complications were vocal cord palsy in two cases, marginal mandibular palsy, horner’s syndrome, hypoglossal palsy in one case respectively.
Conclusion: The transcervical approach is a versatile approach for complete excision of tumours with excellent surgical exposure and minimum morbidity. It can also be combined with excision of submandibular gland in order to improve exposure. In cases of large schwannomas, ICD is recommended to favor a complete excision.

Parapharyngeal space (PPS) is an inverted pyramidal space with its apex towards the hyoid bone. It is bounded medially by buccopharyngeal fascia, posteriorly by the prevertebral fascia and laterally by the medial pterygoid muscle and mandible. The tensor styloid vascular fascia divides the parapharyngeal space into pre-styloid and post-styloid compartment. The prestyloid space contains the retromandibular portion of deep lobe of parotid, minor or ectopic salivary gland, 5th cranial nerve supplying the tensor veli palitini, ascending pharyngeal artery along with venous plexus and fat. The postsyloid space is potential because of its major neurovascular contents like carotid sheath and cranial nerves 9th to 12th. According to its location the differential diagnosis of the pathology of this space are considered as: prestyloid: salivary gland neoplasm, lipoma, neurogenic tumours; poststyloid: schwannoma, paraganglioma, neurofibroma [1-3]. Primary tumours of PPS are rare and account for 0.5% of head and neck neoplasms [1-3]. Because of the location of this space, the clinical examination as well as the appropriate surgical approach is a considerable challenge. Computerized Tomography (CT) and Magnetic Resonance Imaging with MRA- MR Angiography both are important in preoperative diagnosis. Preservation of the fat plane between the mass and the parotid gland strongly suggests an extraparotid origin of tumour. Poststyloid tumours will push the carotid sheath anteromedially; whie posterolateral displacement of carotid sheath is seen in prestyloid tumours [3,4]. The surgical approaches to access parapharyngeal space tumours (PPST) are traditionally transoral-transcervical, transcervical, transcervical transparotid with and without mandibulotomy [5]. Recent advances have considered the use of endoscopes, microdebriders, neuronavigation, and robotic surgery to facilitate better tumour removal [6]. The experience of PPST in our institiute via transcervical approach is highlighted in this study.

A retrospective study of 14 patients, who were primarily diagnosed as PPST and underwent excision via transcervical approach between January 2013 to January 2015 was done. The data obtained were reviewed on basis of patients clinical details, presenting symptoms, imaging characteristics, fine needle aspiration cytology, surgical approach, postoperative complications, and histological confirmation (Table 1).

A curvilinear skin crease incision was given 2.5 cm below the lower border of mandible. In cases of large tumours some modification in the incision was done as shown in (Figures 1 and 2). Subplatysmal skin flaps were elevated. Cervical fascia was incised and sternocleidomastoid muscle was delineated. Great vessels of neck were identified (secured with loops). Posterior belly of digastric was identified and retracted posteriorly. Facial vessels were ligated, if required. Lower cranial nerves were identified (Figure 3). The tumour once identified was dissected extracapsularly and freed from its surrounding attachments (Figure 4). In cases of large or high positioned tumours, the posterior belly of digastric, stylohyoid muscle and stylomandibular ligament were transected for wider exposure. Submandibular gland was also mobilized anteriorly, if required. In three cases, the submandibular gland was removed completely for better visualization. For posteriormedial dissection the tumour was dissected bimanually with one finger intraorally in the parapharyngeal space and the other hand separating the capsule from the operative field. In one case, the sternocleidomastoid muscle was cut below Erb’s point for better visualization. Hemostasis was achieved and a drain was inserted. The final view of intraoperative site after tumour removal is shown in (Figure 5) and the removed specimen (schwannoma) is shown in (Figure 6). If the tumour was at the carotid bifurcation and causing splaying of the carotids, careful dissection was done in the carotid sheath and the tumour was followed extracapsularly, with special considerations, not to injure lower cranial nerves. If the capsule was adherent to the carotids, adventitial dissection was carried out. Intracapsular enucleation was done in two cases of suspected cystic schwannomas which were difficult to approach superiorly and medially (Figures 7-9).

Most common presenting complaint was a unilateral neck mass (92.8%). The mean age at presentation was 42.4 years (Range: 28-67 years). The study group had five males (35%) and nine females (65%). FNAC (Fine Needle Aspiration Cytology) was done in all cases. Positive Predictive Value (PPV) of FNAC was 57.14%. Three patients had CT alone, two had both CT and MRI scanning, and the remaining 9 were investigated by MRI imaging. All patients had tumour size greater than 4 cm on imaging studies. Displacement of great vessels is as described (Table 1). All patients underwent tumour excision via transcervical approach. Submandibular gland was removed to improve exposure in four cases and in one case it was retracted anteriorly. Extracapsular dissection was done in twelve (85.71%) cases, while intracapsular debulking was required in two cases (14.28%).Complete tumour excision was done in all cases. Intraoperative blood transfusion was not required in any case. Post-operative complications included marginal mandibular weakness in one case, vocal cord palsy in two cases (14.28%), horner syndrome in one case and hypoglossal palsy in one case (Table 1). None of the patients developed wound infection or hematoma. Histopathological diagnosis confirmed plemorphic adenoma in seven cases, schwanomma in five cases, paraganglioma in two cases. No cases have tumour recurrences till present.

Histologically and anatomically, the most common tumour of the parapharyngeal space is parotid pleomorphic adenoma [7,8]. Our study shows similar finding, with schwannoma being the second most common tumour, followed by paraganglioma. Pleomorphic adenoma occurs in the prestyloid compartment, and arises from either the deep lobe of parotid gland or minor salivary ectopic tissues [9,10]. Schwannomas in PPS arise from lower cranial nerves or from the sympathetic plexus. Paragangliomas, however, are rare; and slow growing tumours of neural crest origin. The other tumors in PPS are neurofibroma, meningioma and lymphoma. The PPV of FNAC was 57.14% in our study which is quite lower than found in literature [11]. One of the reasons of low accuracy of FNAC in our study is the fear of complex anatomy of this region and situation of tumours surrounding the great vessels. Both CT and MRI are highly useful for diagnosis and planning surgical intervention in PPST. The imaging modality of choice according to our study is MRI as it better delineates origin (prestyloid/ poststyloid compartment), character (benign/malignant), vascularity, and also shows relation with the deep lobe of parotid and the great vessels. ICA being a component of post styloid space, all tumours in pre-styloid compartment has a tendency to displace it posteriorly. Any tumour inside the carotid sheath may cause splaying of carotids, as seen in our study. High index of suspicion should be kept to rule out schwannoma vs carotid body tumour as FNAC is highly inconclusive. We advise MR with angiography for suspicious tumours in carotid sheeth. Vagal schwannomas have a tendency to splay carotids while cervical sympathetic schwannoma will cause anterior displacement of carotids. Transcervical approach not only gives excellent exposure both in pre-styloid and post-styloid spaces, but also prevents any undue injury to vessels and nerves. The trans-parotid approach for tumours of deep lobe of parotid are considered having a higher risk of facial palsy and the transoral approach is not useful for large tumours with extention into neck. However, if required, the trancervical approach can always be combined with parotidectomy and mandibulotomy. Table 2 summarizes the various approaches to PPS and its advantages of transcervical approach over other approaches. The key to prevent any complications during surgery is to perform blunt dissection along the tumour capsule (extracapsular dissection) and avoid its rupture. However in cases with large suspected schwannomas with difficult dissection superiorly and medially, internal enucleation and debulking of tumour is recommended by us to avoid mandibulotomy. Functional preservation of peripheral nerves by intracapsular enucleation has been reported in literature [12,13]. In our study we encountered two vagal, one hypoglossal and one cervical sympathetic schwannoma. We were able to preserve vagal nerve function in one patient. A nerve monitor can also be a useful tool to preserve the nerve of origin. Kim et al. concluded that no significant difference in the recurrence rate between the total tumour removal including nerve fibers and intracapsular enucleation exists [14]. In cases of tumours splaying the carotids, high index of suspicion for carotid body tumour should be kept in mind and careful dissection from the adventitial layer of the carotids should be carried out. 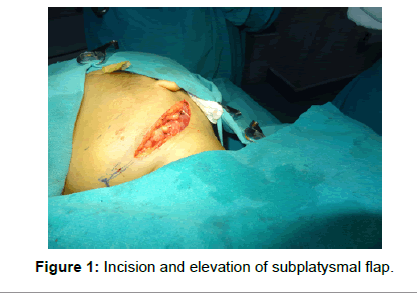 Figure 2: Modification in incision according to the extention of tumour in parapharyngeal space. Figure 7 a, b: Coronal CT showing a prestyloid parapharyngeal mass on left side, displacing the pharyngeal mucosa medially. Note the linear displacement of fat surrounding the tumour on axial scan (b). Figure 8 a, b, c, d: Mri Imaging with Angiography showing a parapharyngeal schwannoma between the two forks of carotid causing its splaying in post styloid space. Fig c showing the intaoperative dissection of tumour, taking control of the great vessels. Also note the hypoglossal nerve overlying the tumour. Fig d showing the tumour which was delivered out. Figure 9: a, b, c: Preoperative Imaging findings in Schwannoma of post styloid space from skull base till carotid bifurcation causing splaying of carotids. Also note a posterolateral extention of the lesion into left c2 foramen. Here the ICA is displaced laterally

Tumours of parapharyngeal space are challenging and have important surgical considerations due to their close relation to neurovascular structures and deep lobe of parotid gland. Imaging plays a crucial role to delineate origin, vascularity and relation with the great vessels. The transcervical approach is a versatile approach for complete excision of tumours with excellent exposure and minimum morbidity. It can also be combined with excision of submandibular gland in order to improve exposure. Intracapsular debulking is recommended in cases of schwannomas, which can provide better neural preservation rate.

Copyright: © 2016 Patadia S, et al. This is an open-access article distributed under the terms of the Creative Commons Attribution License, which permits unrestricted use, distribution, and reproduction in any medium, provided the original author and source are credited.