Beware More than Just the Yellow Snow! A Norovirus Outbreak Associated with a Ski Resort

A laboratory-confirmed Norovirus outbreak occurred at an Arizona ski resort February 2013. A case-control study was performed by the University of Arizona’s student outbreak response team (SAFER) in collaboration with county and state health departments. 46 cases and 25 controls were interviewed quickly. Having eaten at a restaurant at the ski resort was significantly associated with being a case (odds ratio [OR]=9.7) and in particular, the base restaurant (OR=24.9). While the outbreak was likely the result of environmental contamination in the restaurant, the consumption of French fries may have played a significant role. This investigation highlights a successful collaboration between academic and applied public health.

Each year norovirus accounts for 90% of all non-bacterial gastrointestinal illnesses and 50% of acute outbreaks worldwide [1-3]. Norovirus is spread through the fecal-oral route [4], and transmission can occur person-to-person, through consumption of contaminated food or beverages, or from contact with fomites [5].

Transmission commonly occurs in closed environments such as cruise ships, day care centers, hospitals, nursing homes, and restaurants [2,6]. Symptoms generally last one to three days, and include nausea, vomiting, diarrhea, and headaches [4,7-9]. Annually in the United States (U.S.), norovirus causes an estimated 21 million cases of gastroenteritis, more than 70,000 hospitalizations, and 800 deaths across all age groups [2,10].

The estimated annual cost in the U.S. is $2 billion, with a quarter of those costs being attributed to hospitalizations [2].

Each February, schools in Tucson, Arizona close observe “Rodeo break”. During this time, many families opt to spend the five day break (Wed-Sun) at winter resorts upstate. In February 2013, there was a laboratory-confirmed norovirus outbreak linked to eateries at a ski resort.

Stool specimens collected from five people tested positive for norovirus GII + at the Arizona State Public Health Laboratory. Interviews for this outbreak investigation were conducted, in large part, by the Student Aid for Field Epidemiology Response (SAFER) team at the Mel and Enid Zuckerman College of Public Health [11], led by Pima County Health Department (PCHD), the primary jurisdiction of the cases.

This outbreak is an example the successful partnership between academic and applied public health and highlights the type of surge capacity, both for interviewing and data analysis, available to health departments when these relationships exist.

The SAFER team was contacted by PCHD on Wednesday, February 27 after they received numerous calls from citizens self-reporting acute symptoms of vomiting, diarrhea and nausea. All cases reported travel history to a local ski resort the previous week. PCHD provided SAFER with an initial line list and outbreak questionnaire.

Within four hours of the request for assistance, the team had identified and interviewed 13 cases and 8 controls. By Monday, March 4, 46 cases and 25 controls, had been interviewed. On Friday, March 8, the Arizona Department of Health Services (ADHS) and PCHD closed the investigation.

To determine if secondary transmission was taking place, indicated by an onset time longer than the initial 24-48 incubation period for norovirus, case onset times were converted to hours since the onset of the earliest case. This was necessary because initial analyses did not indicate a particular point source of exposure (such as one common shared meal) and it was uncertain when during the five days the first exposure occurred. Summary statistics were calculated for both cases and controls including: onset date; restaurant exposure; lodging type and occupancy; illness duration; onset time relative to the first case; and age.

Basic univariate analyses were performed, including student’s t-test or ANOVA (or their non-parametric equivalent) or simple logistic or linear regressions. For the multivariate analyses, logistic models were built using the case definition dependent variable, while for the onset time and illness duration dependent variables, multiple linear regressions was used.

Due to the communicability of norovirus, all multivariate models were adjusted for clustering by shared lodging. When selecting the multivariate models, potential interaction variables and confounders were considered and tested for using standard techniques. Diagnostics and assumptions were tested on all models using goodness-of-fit tests. All analyses were performed using State versions 11 and 12 (Statacorp, College Station, Texas). For analyses of food items, combination foods, such as chili fries, were analyzed for each separate component as well as combined. All food analyses were also adjusted for food and shared lodging.

More than half (59.2%) of people reported having eaten at the base restaurant, while less than ten people reported eating at each of the other restaurants. The mean onset time following the first case was 47.3 hours with average illness duration of 47.8 hours (range 5-72). The mean age was 27.3 years, the median age of all people interviewed was17 years (Table 1).

Table 1: Summary statistics. Some people at ate multiple restaurants; counts are number of people who did eat at a given restaurant. *Onset date missing for one case. Percentages based on n=45 cases. 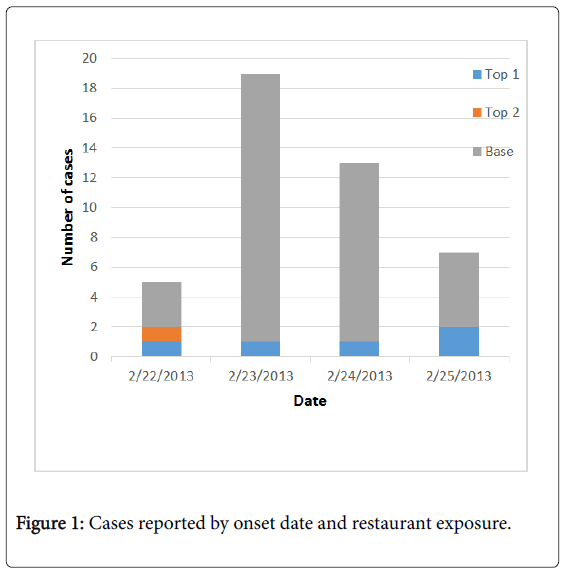 There were seven major food items reported by patrons of these restaurants (hamburgers, cheeseburgers, chili, French fries, cheesesteak, fry bread, and pizza). Analyses of foods found only one food to be statistically significant. Consumption of French fries was found to significant in the univariate (OR=4.36; 95% CI: 1.27-17.1) and when adjusted for both lodging and age (OR=4.25; 95% CI: 1.15-15.8). Only cases reported eating hot dogs (n=8), but the proportion of cases with this exposure was low (17%).

When the assumptions for logistic regression were assessed, we found the linearity of the log-odds assumption to be questionable, as the plot of the log-odds against age had a parabolic shape. The required sample size to include a quadratic term was not available. The small sample size made it difficult to judge the other diagnostics normally used for logistic regression. Linear models related to illness duration and onset time were found to meet the linearity assumption. Neither the constant variance nor the normality assumptions were met, but this may have been a product of the small sample size.

Cases peaked on Friday and Saturday, with 80 percent of cases occurring on those two days. Eating at a restaurant was found to be a statistically significant risk factor for illness. Age was negatively, significantly associated with onset time. Eating at a restaurant was significantly associated with shorter illness durations; however this may only be anomaly in the data. It could also be that people who ate at restaurants developed symptoms and transmitted the illness at higher dosages (through environmental contamination of a shared bathroom/living space) to people staying in the same places. As mentioned in the methods section, due to the nature of pathogens such as norovirus, the multivariate models adjusted for clustering by lodging type, which improves the robustness of the standard errors of the parameters, without including lodging type as a covariate.

The small sample size limited the (scope) of the analysis, including: making it difficult to test individual foods; affecting the statistical power, including by forcing the use of non-parametric alternatives to commonly-used tests; and making the assumptions for regression models difficult to check.

Unfortunately, as is common in many foodborne outbreaks, analyses of food items were not available for laboratory testing. Results found there to be a high odds of illness associated with consumption of French fries, although this could be due to the handling practices or an environmental contaminant near the food area, rather than the food itself given its cooking procedures.

This outbreak investigation is an example of a timely response of a health department working with a student response team. The time from notification to the completion of the interviews was five days from Wednesday, February 27, to Monday, March 4 with the vast majority of interviews being conducted by the students on a voluntary basis. Students also volunteered to clean and analyze the data, submitting their results to the health department such that action could be taken as deemed appropriate by environmental services.

The analyses found the source of the outbreak was likely the base restaurant at the ski resort, followed by secondary transmission. French fries were identified as a possible source, but could not be confirmed through laboratory analyses. While at least one previous study [12] has found an outbreak of Staphylococcus aureus associated with fried chicken, it is more likely that the association with French fries found in our analysis was the result of environmental contamination, e.g., a sick food worker.

We would like to thank the epidemiologists at the Pima County Health Department and Arizona State Health Department for working so closely with our team and directing the response efforts. Thank you to all the students in SAFER who worked on this investigation and conducted the interviews for the analyses.

Copyright: © 2016 Pope B, et al. This is an open-access article distributed under the terms of the Creative Commons Attribution License, which permits unrestricted use, distribution, and reproduction in any medium, provided the original author and source are credited.