Copyright: © 2015 Claudia G et al. This is an open-access article distributed under the terms of the Creative Commons Attribution License, which permits unrestricted use, distribution, and reproduction in any medium, provided the original author and source are credited.

Bioactive coatings were obtained via the sol gel method and deposited on stainless steel AISI 316L using a pneumatic spray. TEOS and MTES were used as precursors, obtaining a hybrid sol; wollastonite bioactive particles were dispersed inside the sol. The corrosion resistance of the coatings was tested with potentiodynamic curves after immersion of the coatings in SBF for 7 and 40 days. It was possible to obtain coatings with a thickness of 47.7 ± 8 μm. In comparison with other methods of deposition, it was possible to obtain thicker coatings with the pneumatic spray deposition technique, giving the substrate a better protection factor against corrosion. After immersion in SBF (simulated physiologic fluid), the formation of an appetite film on the surface and inside the pores was observed. Deposition of the apatite film helps to promote Osseo integration, and the product formation inside the pores helps to improve corrosion resistance of the substrate.

The most common causes of failure of an orthopedic implant are biological incompatibility and degradation of the piece. Metals are used due to their mechanical properties, but a risk of metallic debris produced by wear and ion release produced by chemical degradation exists, which could lead to early removal of the implant [1-5]. Also, most metals are not able to create a natural bond with the mineralized bone. One way to avoid ion release by the metal of the implant is to coat the metallic implant with a protective film, which in turn could be functionalized with the addition of bioactive particles. That way, the coating acts as a barrier, preventing the release of metal ions and aiding the formation of a bond with the old bone through formation of hydroxyapatite (HAp) [6-8]. Wollastonite particles have generated much interest due to its promise as a potential implantable material because it can form bonds with bone tissue through the development of a biological apatite layer on the surface [9,10]. The formation of apatite on wollastonite ceramics is faster than that on other bioglass and glass-ceramics in Simulated Body fluids (SBF) [11]. Sol gel coatings have been successfully used on diverse substrates and have improved their oxidation and corrosion resistance; also sol gel technique is versatile and allows the synthesis of many oxides using high-purity precursors [12-14]. Dip coating and pneumatic spray are two techniques that can be used to deposit bioactive coatings on metal substrates. With the dip coating technique, very uniform and thin coatings (<4μm) can be obtained [14-16]. Regarding to the spray technique it has been found good results with bioactive coatings applied by airbrush, with thickness in the 50-500 μm range and with adhesion strength of 25 MPa [17]. As well as in others electronic and industry applications, the spray technique has been used, and the main advantage of this technique is that the access to very irregular zones is possible, making pneumatic spraying an affordable and versatile technique that can be used in many applications [17-22]. The main goals of this study were to synthetize bioactive coatings via the sol gel method, obtain coatings with significant thickness by pneumatic spray, and compare the electrochemical behavior of an stainless steel 316L substrate using two different techniques: spray and dip coating.

The sol was prepared using TEOS (Tetraethyl orthosilicate, Merck) and MTES (Methyltrietoxysilane, Merck) as silica precursors, absolute ethanol (J.T Baker 99.7%) as a solvent, and acetic acid and 0.1 N nitric acid as catalysts. The molar ratio of TEOS/MTES was 40:60, H2O:SiO2 was 2:1, and H2O:acetic acid was 10:1. The sol was prepared by mixing the alkoxides and the ethanol at room temperature inside a balloon glass. A magnetic mixer was used during the synthesis process. Then water and acetic acid were added. Once the reactants were mixed, the balloon glass was placed in a thermostatic bath for 3 hours at 40°C, obtaining a transparent sol with a pH of 6. For the suspensions, an ester phosphate dispersant was added to the solution and stirred using a high-shear rotor-stator (Silverson L2R) for 3 minutes; the proportion of dispersant was 3% by weight with respect to wollastonite particles. Finally, Wollastonite (10% by weight) particles were added to the solution and stirred using the high rotator for 3 minutes. Mirrorpolished metal plates with a size of 2.5 x 2.5 x 1 (mm) of 316L alloy were used as substrates. Samples were degreased, hand washed with distilled water, and rinsed in ethanol. Coatings were obtained via pneumatic spray using a spraying distance of 60 cm, a nozzle diameter of 1.5 mm and air pressure of 50 psi. After each deposition, the coatings were treated at 450°C for 30 minutes. After ten depositions, the coating’s thickness was measured by viewing a cross-section scanning electron microscope (SEM) image of the sample. The electrochemical behavior was tested using an electrochemical unit (GAMRY 600) in a Simulated Body Fluid (SBF) at pH 7.3 after 7 and 40 days of immersion at 37°C. The bioactivity of the coatings was tested according to the capacity of the coated materials to induce apatite films on their surface after different periods of immersion in SBF [21,22]. The analysis of the surface and the determination of the presence of the apatitic phases were carried out by means of a scanning electron microscope (JEOL JSM5910LV) equipped with a microanalysis EDS and WDS system, used to detect the composition of the apatitic phase. 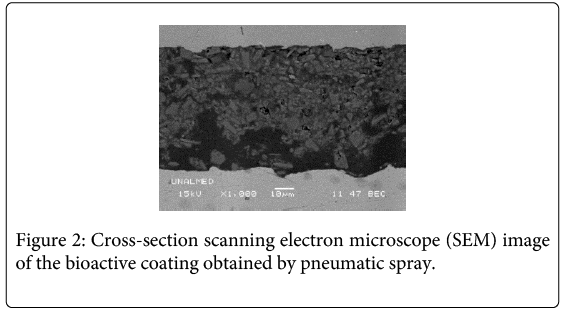 The sol gel method was introduced to generate nanoscale coatings with appropriate pore size and structures for improving osseointegration [24]. Some deposition methods used with the sol technique to obtain bioactive coatings are: dip coating [25,26], spin coating [27], and reactive magnetron sputtering [28]. All of these methods are used to obtain nanoscale coatings. However, with the pneumatic spray technique it is possible to obtain thicker coatings without any cracks. Figure 4: EDX of the apatite film formed after 7 days of immersion on the surface of the coatings.

In the present study, the pneumatic spray technique was used for coating a stainless steel 316L used in implants and hip prosthesis. This technique allows multiple depositions (ten depositions in our case). During the spray deposition, ethanol evaporation took place before the solution reached the substrate; this helped to minimize internal stresses during the drying and sintering stages. Also, the sprayed solution reached the substrate with high velocity and moderate pressure, which was enough to overcome the superficial tension of the substrate. Residual stresses generated during deposition and sintering were not significant; thus a porous coating without any cracks was obtained. A free crack and thicker bioactive coating was obtained with the pneumatic spray deposition technique. This was very different to what happens with the thickness of the coating obtained by dip technique; although the dip coating technique allows the fabrication of very uniform and crack-free sol gel bioactive coatings, there is a restriction with respect to the thickness; the thickness obtained in previous investigations was not greater than 2 μm because the dip coating technique has a critical thickness, due to the evaporation of the solvents [23].

The thickness of the coating obtained with airbrush spraying and pneumatic spray method is only dependent on the number of spraying cycles; Francesco Baino et al. prepared Wollastonite coatings with thickness in the 50-500 μm range and conclude that this technique is suitable to manufacture homogeneous and continuous coatings on model curved ceramic surfaces [15]. Other authors have developed coatings on metals including particles as hydroxyapatite, zircon, bioglass, etc. [23,24]. However, coatings including wollastonite particles, not only show better bioactivity than others do [25,26], but also have interesting mechanical properties because the particles form [27] and distribution of the bioactive particles on the surface of the coating.

The electrochemical in vitro assays revealed that the presence of the coating improved the corrosion resistance of the stainless steel substrate after immersion in SBF, indicating that the coating acts as a barrier to prevent the electrolyte from reaching the substrate at 7 and 40 days of immersion in SBF. All the potentiodynamic data showed a decrease of the passivation current density (ipass), which is the current density at which the metal remains passive, and a shift to positive potentials of the breakdown potential compared to the bare material. Coatings obtained through dip coating had less corrosion resistance compared with coatings obtained through pneumatic spray. The difference between thicknesses could be responsible for the improvement in resistance.

Electrochemical tests showed an interesting protective behavior of the bioactive coatings applied via spray. Corrosion resistance was proportional to the immersion time of the coatings in SBF. This behavior could indicate that although coatings exhibited pores and defects after immersion in SBF, these defects could be blocked by corrosion products from the metal or by degradation of the particles present in the coating [13,26,30].

The presence of Mg and Na in the EDX spectra of the apatite film formed after 7 days immersed in SBF can be attributed to the SBF where the samples were immersed. The EDX results indicate that the chemical composition of the deposited materials on the wollastonite surface consists of P, Ca and a small quantity of Si, which suggests that the deposited material is a type of apatite. The presence of apatitic phases indicates that the tested coatings are potentially bioactive [31-33]. Previous in vitro studies have also reported that materials containing calcium oxide (CaO) and SiO2 (silicon dioxide) are bioactive and the formation of apatite is faster than on other bioglasses or glass-ceramics in the SBF solution [11].

An in vivo study about bioactive coatings using wollastonite has been demonstrated that the bioactive sol–gel/wollastonite coating on surgical grade stainless steel promotes formation and growth of a new bone in the periphery of the implant, both in contact with the old bone (remodellation zone) and the marrow [23].

The pneumatic spray technique is a versatile and economic technique for use in applying bioactive coatings on metal substrates; this method was used to obtain thicker bioactive coatings synthetized by the sol gel process. With this technique, it is possible to obtain crack-free coatings. Since the thickness of the coatings is higher, the protective behavior of the coatings obtained using the pneumatic spray technique is better than the coatings obtained through dip coating. Wollastonite dispersed in the sol matrix is compatible with the physiological environment and the composition of SiO and CaO helps to accelerate the osteointegration forming an apatite layer in a short period. This fast bioactive response allows to the implant to have a good fixation to the bond.

This paper was supported by the Universidad Nacional of Colombia sede Medellín.