Copyright: © 2012 Zeroual Y, et al. This is an open-access article distributed under the terms of the Creative Commons Attribution License, which permits unrestricted use, distribution, and reproduction in any medium, provided the original author and source are credited.

The authors discuss the ever increasing role of biological renewable resources in energy, nutrition, and pharmaceuticals; specifically those potentially available deep within the oceans. They provide a list of products already gleaned from this vastly untapped marine environment; discuss the innovations in technology required to effectively explore and prospect the deeper reaches of the ocean; expose the impressive contribution to the economy; and expound the paramount importance of protecting the oceans to ensure the future. Already many new proteins, enzymes, and pharmaceuticals are being developed from the fauna and flora of the forests and relatively shallow economic zones of the ocean. With much of the ocean still an unexplored frontier, the authors hope to promote increased interest in research and development in this arena.

The ability of microorganisms to solubilize different forms of calcium phosphate has been reported [6-8]. The solubilization of inorganic phosphates by microorganisms supplies phosphates for plant nutrition and increases their growth [9,10]. The attractive approach of microbially mediated solubilization of phosphate has been successfully proved in soil conditions which resulted in agriculture production similar or better than achieved with soluble phosphate [11,12].

A substantial number of microorganism species, mostly those associated with the plant rhizosphere have been isolated and characterized for their ability to solubilize unavailable reduced phosphorus to available forms exerting a beneficial effect upon plant growth [6-8]. It was assumed that phosphate-solubilizing activity was greater for filamentous fungi than for bacteria [18].

Immobilization of living microorganisms has been described by several investigators [19,20] to be useful in several biotechnological applications. It is widely known that immobilized cells offer a lot of advantages: reusability of the same biocatalyst, control of reactions, and the no contamination of products [21].

The main objective of this study was to examine the abilities of Aspergillus niger, isolated from agricultural soil, to solubilize different insoluble phosphate substrates (DCP, TCP and Rock phosphates) at different culture conditions.

All plates were incubated at 30°C for 1 week. Colonies surrounded by solubilized clear zone were picked and streaked onto NBRIP plates containing 5g/l of TCP. Plates were again incubated at the same conditions to confirm their abilities to solubilize insoluble phosphate. Stock cultures were routinely maintained on LB agar supplemented with 1% of glucose.

Among the isolated strains, Aspergillus niger showing higher phosphate solubilization ability (larger solubilization halo surrounding the colony) in NBRIP plate was selected for further study. It was identified based on the visual observation of isolates grown on PDA plates, micro-morphological studies in slide culture [23] at room temperature, and the taxonomic keys described by Hoog and Guarro [24] as well as the compendium of soil fungi [25]. Stock cultures of isolated strain were routinely maintained on a potato dextrose agar (PDA).

One fungal isolate with higher phosphate solubilization abilities was selected. Abilities of the isolated fungus to solubilize different kind of insoluble phosphates were investigated. For this, the NBRIP plates supplemented with DCP, TCP or natural rock phosphates PR1, PR2, PR3and PR4 at 5g/l were used. The plates were inoculated with the selected fungus and incubated at 30°C. The diameter of clear zone (halo) surrounding the fungal growth as well as diameter of the colony were measured after 10 days of incubation

Precultures of the fungus were prepared by inoculating plugs (diameter 0.5 cm) from the growing zone of fungus on agar plate to 50 ml of nutrient broth (NB). Then, cells were cultivated statically at 30°C for 3 days. Afterward, the precultures were homogenized aseptically using a homogenizer. Aliquots of 1.5 ml of homogenized precultures were used to inoculate volumes of 150 ml of NBRIP containing 5 g/l of tested insoluble phosphates (DCP, TCP, PR1, PR2, PR3 or PR4) in 250-ml Erlenmeyer flasks. The cultures were incubated aerobically at 30°C on a rotary shaker at 150 rpm for 7 days. At several time intervals 4 ml aliquots of fungal cultures were sampled and centrifuged at 15,000 rpm for 15 min.

The clear supernatant was used for determination of the pH and the soluble phosphorus released into the solution. Phosphorus was determined colorimetrically by using the vanado-molybdate method [26]. The pellets were washed with 0.5 N HCl solutions to dissolve the residual insoluble phosphate and then dried at 105°C for 24 h to determine the biomass dry weight. All experiments were performed in duplicates.

Aliquots of 1.5 ml of homogenized preculture of isolated fungus, prepared as described above, were used to inoculate 250-ml Erlenmeyer flasks containing 150 ml of NB. The cultures were incubated aerobically at 30°C on a rotary shaker at 150 rpm for 5 days. After cultivation the fungal biomass was harvested by filtration and then rinsed with sterile sodium chloride water (0.9%).

Entrapment in calcium gel: 100 ml of sterile sodium alginate solution (2% w/v) was mixed, until homogenous, with 2 g of fungal biomass. The mixture was extruded into 150 mM CaCl2, forming beads of 5 mm diameter. The beads were allowed to harden in the CaCl2 solution at room temperature for 30 min, and rinsed with sterile sodium chloride water (0.9%).

At several time intervals, 1-ml aliquots were collected from the bioreactors and centrifuged at 15,000 rpm for 15 min. The supernatants were analyzed spectrophotometrically to determine the amount of soluble phosphorus and to determine the pH of the reactional media. The selected isolate was cultivated, in first time, in NBRIP solid medium containing DCP, TCP or rock phosphates PR1, PR2, PR3 and PR4 as sole insoluble phosphate sources. The obtained results shown as the ratio of halo/colony diameters were represented in (Figure 2). 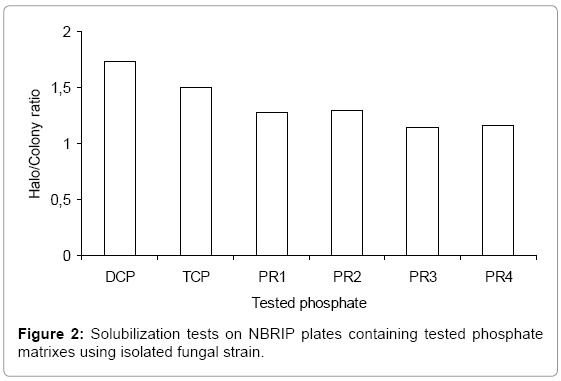 It is generally accepted that phosphate solubilizing microorganisms convert insoluble phosphates into soluble forms through the process of acidification, by producing of organic acids, chelation and exchange reaction [15,27-29]. However, the absence of the halo of solubilization or its reduced diameter can be explained by the diffusion limitation of secreted organic acids [30]. Consequently the phosphate solubilization abilities of isolated fungal strain were screened in NBRIP liquid medium containing the same phosphate substrates at 5g/l. The pH of the culture, the fungal biomass evolution and the concentration of the released orthophosphates were monitored according to time for each tested phosphate. 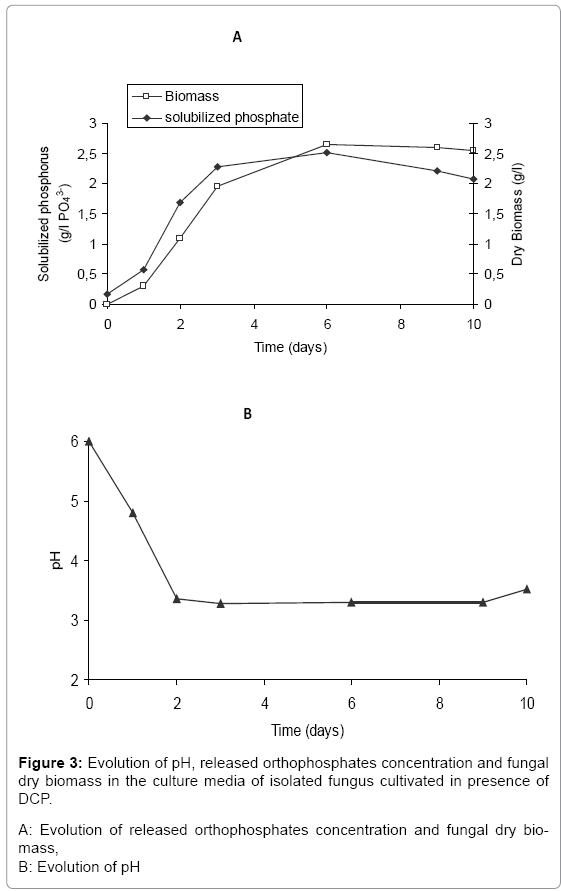 Table 2: The Solubilization efficiency and specific solubilization rate of DCP recorded by free and immobilized biomass of isolated fungus.

The obtained results indicate that isolated fungal strain is able to mobilize phosphorus from inorganic source and may serve as a good rock phosphate solubilizer when inoculated into soils where rock phosphate is used as phosphatic fertilizers. Encapsulated microbial systems could be adopted for different application: solubilization of inorganic phosphate in bioreactors; preparation of microbial inoculants for introduction in soils enriched with untreated rock phosphate and pre-treatment of ores. 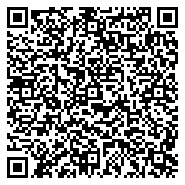