Copyright: © 2015 Jaafar R, et al. This is an open-access article distributed under the terms of the Creative Commons Attribution License, which permits unrestricted use, distribution, and reproduction in any medium, provided the original author and source are credited.

The bacterium Deinococcus radiodurans has been isolated from soil. On the basis of morphological, biochemical, 16S rRNA gene sequencing and phylogeny analysis revealed that, the isolates were authentically identified as D. radiodurans.

D. radiodurans is one of the most known radiation resistant organisms. It can live in cold, dehydration, vacuum and acid, and is therefore known as a polyextremophile. It is found in habitats rich in organic materials, such as soil, feces, meat, or sewage, in addition to that, it’s isolated from dried foods, room dust, medical instruments and textiles [1].

The manufacturing of energy from nuclear power factories, uranium mining, nuclear weapons production and nuclear accidents are the major cause of release of radionuclide's into the environment. The nuclear wastes typically contain inorganic and organic contaminants that include radionuclide's, heavy metals, acids/base and solvents. The high radiation level, in combination with the chemical hazards cause intensive damage to ecosystem and living organisms. The clean –up of nuclear waste by physiochemical methods is impractical and the cost is prohibitive. As a result a less costly in situ bioremediation technology is being investigated as a potential substitute method for treating such contaminated sites. The development of bioremediation strategies using Deinococcus spp, is therefore vital for the clean up of contaminated sites with radioactive waste. As these sites rarely contaminated by a single chemical, it is necessary to developed strain to be multi- resistant to various toxic agents [2].

Bioremediation is a natural process which depends on bacteria, fungi, and plants to altering pollutants as these organisms perform their normal life functions. These organisms have the ability of exploiting chemical contaminants as an energy source in their metabolic processes. Therefore, bioremediation affords alternative tool to destroy or reduce the risky contaminants through biological activity and this method has an effective cost [3].

Among the different methods, bioaccumulation and biosorption are potential for the removal of metals [4]. The active mode of metal accumulation of living cells is in most cases referred to bioaccumulation which relys on intrinsic biochemical and structural properties, physiological and genetic adaptation, environmental modification of metal specification, availability and toxicity [5]. Bioaccumulation is defined as the uptake of toxicant by living cells and transports it into the cell [6] and is a growth dependent process mediated only by living biomass [7]. The process of biosorption is possible by both living and dead biomasses [8]. The ability of certain species of bacteria in accumulating heavy metals was investigated inclusively [9,10]. Hence the natural organisms, either indigenous or extraneous can be used for bioremediation of heavy metals [11].

The present study aimed to isolate Deinococcus radiodurans from soil and identifying it biochemically and molecularly, in addition to determining their ability to remediation Pb and Cd through bioaccumulation and biosorption processes.

Three soil samples (30 gm each) were collected from Um- Qasr district, south of Basra city- Iraq during the January (2013). The samples were collected using a sterile plastic bag and transferred within 2 h to laboratory for analysis. For isolation of Deinococcus radiodurans, one gram of air dried soil sample was serially diluted using distilled water and spread over Tryptone Glucose Yeast extract (TGY) medium (0.5% tryptone, 0.1% glucose and 0.3% yeast extract) agar solid plates. The plates were incubated at 30ºC for 24 h.

Determination of minimum inhibitory concentrations (MIC) for Cd and Pb The MIC of Cd and Pb of bacteria were determined by disc diffusion method [15]. The concentrations of Cd and Pb were between 100 to 1000 mgl-1. Filter paper disks were saturated with heavy metals for 30 min, and then added to nutrient agar plates which incubated for 24h at 30ºC. The salts of CdCl2 and Pb (NO3)2 were used to prepare mother solution of these metals in sterile distilled water.

Bioaccumulation of heavy metals by Bacteria

Bacteria were grown in TGY broth containing different concentrations of lead (5, 10, 25, 50) mgl-1 and for cadmium 10, 20, 50, 100 mgl-1 for 2, 4, 6, 24 and 48 h and incubated at 30ºC in a shaker incubator at 180 rpm. Two replicates for each concentration have been done plus, one as a control. The bacterial cells were harvested by centrifugation at 6000 rpm for 15 min and suspended in 1 ml of distilled water, oven - dried and weighed. The dried biomass were then digested as follow: 100 ml beaker containing the dried cells, 5 ml concentrated nitric acid was added; the beaker was placed on a hot plate, stirred continuously, and heated initially at a medium rate for 5 min. Then, the beaker was heated on maximum setting until nitrogen oxide fumes were given off for a short time and a white residue was left. The beaker was left to cool for about 2 min and digestion was repeated with an additional 2 ml of concentrated nitric acid; this time it was heated until brown nitrogen oxide fumes almost ceased to appear. The beaker was cooled again for about 2 min and then 2 ml of 1:1 hydrochloric acid (35- 37%) was added. The mixture was heated at a medium rate for 3 min. After that it was cooled to room temperature and made up to 25 ml or bigger volume with distilled water.

Where E. Con = the concentration of heavy metals in (mg/g)

A= Concentration of heavy metals from calibration curve

B= final concentration of sample (mg/l)

The equilibrium, kinetics data of the biosorbent D. radiodurans were obtained by performing batch experiments. The experiments were carried out in 250 ml flasks to which 100 ml of single ion metals solution of Cd and Pb, and l ml of biomass (exponential phase) was added. The mixture was stirred at 180 rpm at 30ºC and 15 ml of sample was collected at interval times (2, 4, 6, 24, and 48 h) centrifuged at 6000 rpm for 15 min in a centrifuge. The remaining concentration of metals was analyzed by the atomic absorbance spectrophotometer. An experiment was carried out twice and the mean values were reported. The difference between the initial metal ion concentration and the final metal ion concentration was considered as metal bound to the biosorbent [17].

The data obtained on the Bioaccumulation and biosorption of different metals at different concentration and time interval, by the bacterium D. radiodurans subjected to Statistical analysis using the SPSS program (SPSS Inc., Chicago, IL Version 15.0). The data were analyzed through analysis of variance (ANOVA). To detect the statistical significance of differences (P<0.05) between means.

The selected bacterium was characterized and identified by using morphological, physiological and biochemical tests (Table 1). Bacteria were presumptively identified as Deinococcus sp. According to Chaturvedi [18]. Also the bacteria were subjected to 16S rRNA gene sequence analysis. The sequence of 16S rRNA of bacteria was submitted to Blastn (database 16S ribosomal RNA sequences (Bacteria and Archaea); Megablast) (www.ncbi.nlm.nih.gov/blast). That indicated a close genetic relatedness of bacteria with the rRNA sequence of D. radiodurans.

The MIC is the lowest concentration of the heavy metals that completely inhibited bacterial growth [19]. D. radiodurans showed significant resistance to high concentrations of Pb and Cd, but it was more tolerant to Cd than Pb. MIC was 400 mgl-1 for Pb, while it was 600 mgl-1 for Cd. Chaturvedi [18] reported different results in his study, he reported that the different isolated of Deinococcus (GrK2, Grk4, GrK5 and DR1) were sensitive to Cd+2, but they exhibited varying levels of tolerance. Grk2 was being extremely sensitive to Cd+2, DR1 is moderately tolerant, while Grk4 and Grk5 showed comparable tolerance, and also he mentioned that the toxicity of Cd affected by growth state, with stationary phase cells being more sensitive than the exponential phase. Hua et al. [20] reported that D. radiodurans R1 does not exhibit strong resistance to heavy metal Hg (II), Ag (I), Cr (VI) and Pb (IV), and recorded MIC (300 , 1600 300 and 3200 μM) for these metals respectively.

From the results of the present study there is a difference in results recorded in comparison with other studies results recorded previously, and this can be explained as the isolated strains was different and the growing conditions such as growth stage also different. In addition to the high concentration of heavy metals in the study soil, which enhance the ability of tolerant to these bacteria. Those can be supported by the result of Chaturvedi [18], who reported that, the growth phase depending differences in tolerance. Qi and Hulett [21] reported that, the tolerance of growing B. thuringiensis DM55 cells has been shown to vary at different growth stages, supporting the existing evidence that the structural features of gram positive bacterial cell walls are affected by the developmental state of the cell. Another reason for these results differences is the variance in design of experiment, such as growth media composition as clarified by Kumar et al. [22]. Complex media such as LB precipitate Pb as a result of sequestration with organic moieties thus reduce the bioavailability of Pb to the bacterial strains [23]. 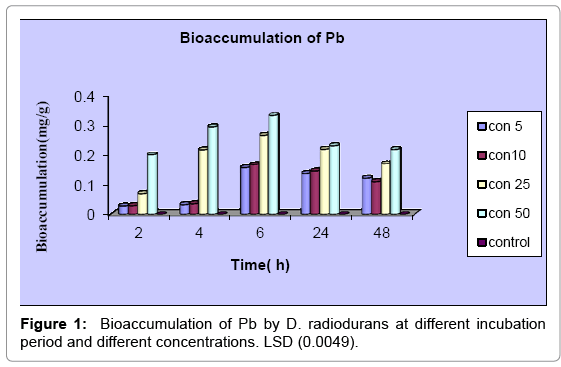 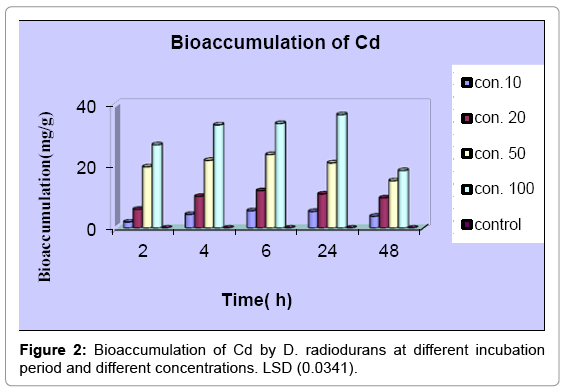 The results of Pb and Cd accumulation showed that, this bacterium was able to accumulate high amounts of Cd 36.86 ± 0.007 mgg-1 in comparison to 0.33 ± 0.0007 mgg-1 for Pb. This may be due to difference in toxicity of these metals to this bacterium and to its intrinsic properties which help it in occupying varying tolerance, also the history of pollution of the soils from which bacterium isolated by these metals play critical tool in development ability of these bacteria to deal with such contaminations, this which agrees with the results of the present study where it show high MIC value for Cd than this for Pb for this bacterium.

Table 3: Biosorption (%) of Lead and Cadmium at different period of incubations and different concentrations by D. radiodurans.