Objectives: We studied the characteristics of a cohort of HIV/ TB Infection co-infected patients in a HIV Outpatient Clinic in New Orleans to identify the methodology of screening, diagnosis and treatment of TB Infection (TBI).
Methods: A three-year retrospective review of 1,937 HIV-infected subjects co-infected with Mycobacterium tuberculosis (MTB) in which a T-SPOT®.TB test was done, and a borderline or positive T-SPOT®.TB result was found, were selected. HIV status, adherence to HIV antiretroviral therapy (ART), and clinic follow-up information were abstracted from provider notes. When repeat T-SPOT®.TB tests were performed, the results were abstracted to determine concordance and rates of conversion and reversion.
Results: Out of 1,937 HIV-infected subjects reviewed from 1/2012 to 12/2014, 68 (3.5%) showed a positive or borderline T-SPOT®.TB test. The cumulative prevalence of positive T-SPOT®.TB tests was 2.4%. In 19 subjects who were initially T-SPOT®.TB-test positive and had serial testing done, 11 tests (58%) reverted to negative. In 15 subjects with borderline test results the first time, tests in 10 subjects (67%) changed to negative; 2 changed to positive, and these subjects then progressed to active TB during the following 14 months. Eighty-seven percent of patients in this clinic were treated for TBI.
Conclusion: Other than HIV viral load and CD4-cell count, maintenance of normal weight and adherence to medical care may have also played a part in preventing the progression of TBI to active TB in this cohort. The propensity for change in the T-SPOT®.TB from borderline to negative and the rate of reversion from positive to negative confirms the importance of the test’s borderline category. The reasons for these variations warrant further understanding and review. Although the variations observed in some test results may impede screening for TBI with its limitations notwithstanding, targeted screening, especially in this cohort, remains the backbone of TB control.

Human immunodeficiency virus (HIV) infection is an important risk factor for the progression or reactivation of latent tuberculosis infection (TBI) [1]. In the US, the incidence of tuberculosis (TB) disease among HIV-infected subjects is more than double the rate of non-HIV infected patients (6.8 versus 3.0 per 100,000 population) and is a prevalent cause of death [2,3].

Screening for and treating TBI play an important role in helping to control TB [4]. The progression of TBI to active TB disease is more common among the elderly and in immune-compromised patients whose TBI is undiagnosed and who are therefore not receiving preventive therapy [4-8]. Among HIV patients receiving treatment for TBI, the expected incidence of TB disease is 5.2/100 p-y (95% CI: 3.4- 7.8) [9]; however, without treatment the progression of LTB to disease ranges from 7% to 20% [10-12]. The progression to active disease is also higher among those patients with poor adherence to medical care, erratic compliance to antiretroviral therapy (ART) for HIV, and/ or intermittent adherence to TBI prophylaxis [13]. The rate of noncompletion of isoniazid preventive therapy (IPT) among patients with HIV was reported being as high as 41% [14]. This non-adherence to therapy is associated with double the rate of TBI’s progression to active TB disease [9].

The T-helper cell count (CD4) is considered a marker of clinical evolution for the progression of TBI to active disease, and the development of active TB is a criterion for the definition of AIDS [15]. However, there is evidence that although CD4 T-cells play a significant role in the immune defense against Mycobacterium tuberculosis (MTB), TBI may progress to primary/lymph node mediastinal TB in patients with a CD4 T-cell count higher than 200 cells/mL [6,16] and to parenchymal pulmonary TB among HIV patients with a CD4 T-cell count between 171 and 962 cells/mL [6,17,18]. Furthermore, a higher CD4 T-cell count was found to be associated with previous tuberculosis infection and a lower CD4 T-cell count associated with the recurrence of TB in high-prevalent settings [13]. These findings suggest that there may be concomitant factors other than cell-mediated immunity and CD4 T-cell count involved in the progression or non-progression of TBI to active TB in HIV populations.

Clinical and laboratory information was abstracted from the first documented positive or borderline IGRA test and continued to be abstracted until September 2015. Data on demographics, including age, race, sex and country of origin, as well as history of BCG vaccination, history of treatment for TBI and/or active TB. Clinical status was assessed by abstracting health parameters at the time of the first TB screening showing either a positive or borderline T-SPOT®.TB result. These parameters included CD4 count, viral load (VL), height and weight on the first and last visits, and the highest and lowest values of VL and CD4 T-cells between the date of the first positive or borderline IGRA result and the last visit before September 2015. Concurrent medical conditions that may have affected the progression of TBI to active TB were also identified.

Adherence to medical care was defined as the patient’s attending the HIV outpatient clinic. Compliance with medication was assessed as positive if it was documented in the physicians’ assessment notes [19-21].

Follow-up times and subjects lost to follow-up were assessed by collecting dates of the first and last visit attended. Minimal time of follow-up after a TBI diagnosis was set at 9 months to include patients in the analysis of data. The time between the date of the HIV diagnosis and the first T-SPOT®.TB test date was defined as length of time being HIV infected.

Statistical analyses were conducted using SAS version 9.3 (SAS Institute Inc. Cary, NC). Continuous variables were summarized by median, mean, and range; proportions were compared using chi-square or Fisher’s exact tests, and t-statistic was used to test for group mean differences. Multivariable linear regression was used to test for the association of continuous outcomes with predictor variables; p values were two tailed, and statistical significance was set at 0.05. The study was approved by the University Medical Center and the Louisiana State University Health Sciences Center IRB.

A total of 1,937 HIV-infected patients was analyzed to select those with a positive or borderline T-SPOT®.TB test during the study period (n=68) (3.5%). The other 1,869 (96.5%) patients remained with a negative T-SPOT®.TB test or were not tested with the T-SPOT®.TB test throughout the observation period.

The average time of patient follow-up was 2.4 years and varied between 9 months and 3 years. Most subjects were males (72%) of African-American (AA the) race (75%) who were US born (97%) and had a median age of 51 years and an average of 12 years since being diagnosed with HIV. Adherence to HIV medication was 67%, based on provider documentation. Adherence to HIV care, as determined by HIV medical visits, was 90%. The median CD4 cell count at the time of first TB test was 482 cells/mL, and the median VL was 198 copies/ mL; the median of highest VL test during the observed period was 424 copies/mL, and the median of lowest CD4 T-cell values was 379 (Tables 1 and 2). 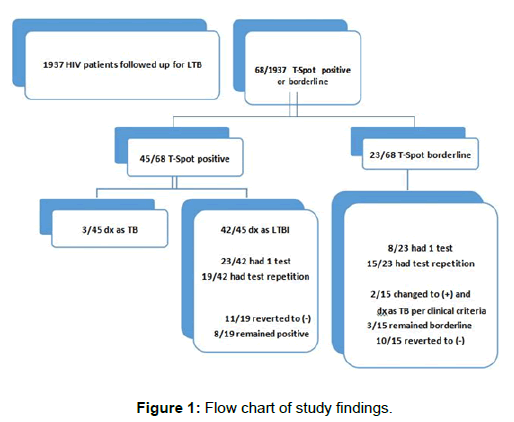 Thirty-four (50%) of the 68 patients analyzed with either a positive or borderline initial test had a T-SPOT®.TB test repeated during the observed period. The median time that elapsed between tests varied between 299 and 360 days; mean intervals between tests were shorter when the results were borderline than when they were initially positive (312 vs. 490 days, p=0.06).

** By Medical History; b= borderline

Table 4: Initial characteristics of study population related to stage/diagnosis of TB and test change rate from initial positive and borderline on repeat testing.

At the first T-SPOT®.TB test, laboratory readings were higher among active TB patients (median: 48 spots), followed by those with prior TBI disease (median 24 spots). Those subjects diagnosed as having current TBI showed the least number (median 12 spots). On serial testing, the percentage of T-SPOT®.TB test result changes was highest among patients with prior TB disease and treatment (100%) (Table 4, Group B) and was 50% and 42% among subjects with current or prior diagnoses of TBI, respectively. In total, 21/34 (62%) showed change in readings on serial testing irrespective of clinical classification (Tables 3 and 4).

The clinic-practice pattern of TBI treatment in this cohort is shown in Figure 2. Of the 23 patients diagnosed as TBI based on an initial and the only positive T-SPOT®.TB test, 21 were treated; 11 had repeat testing and reverted to negative, and of these one was treated. Eight remained positive on repeat testing, and 6 of those 8 were treated for TBI. Thus 27/31 patients with defined TBI were treated. 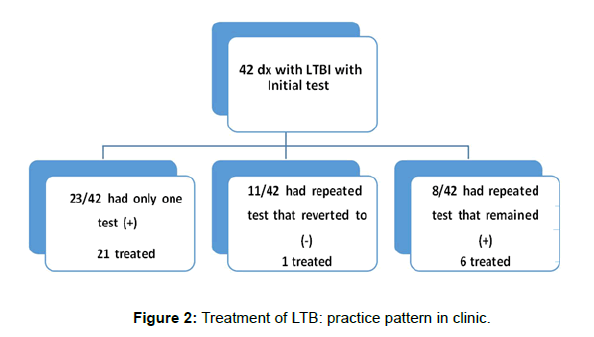 Table 5: Clinical characteristics of patients with LTBI diagnosis by TB status and association between SPOT®.TB test and CD4 T-cell count.

These findings align with previously published reports [19], which found a 10% rate of progression of TBI to active TB among HIV patients over an observation period of 12 months. In our study, the follow-up time may not have been long enough for TBI to progress to active TB. In those cases which progressed to TB after TBI diagnosis, the time elapsed between the diagnosis of TBI and the appearance of TB signs or symptoms varied between 4 and 14 months (n=2).

T-SPOT®.TB test repetitions serve as a surrogate for the confirmation of infection with Mycobacterium TB, with increased test sensitivity to 85.2% [18]. The rate of T-SPOT®.TB test reversion from positive to negative was noted to be 58%. Eighty percent of the borderline tests resulted in either a positive or a negative result upon repeat testing, with a change to negative in 67% of cases and to positive in 13% of subjects. Similar findings were noted in previously reported publications [18,20-22].

We also observed that the higher T-SPOT®.TB test readings (spot numbers) correlated more strongly with patients’ history of TB disease than to their current TBI status. This observation needs to be validated further.

The pre-analytical process and analytical phases of the T-SPOT®.TB test used in this study were constant. During the observation period, the phlebotomist team was the same, blood-sample handling and routine for the preparation of blood tubes was standardized, and blood samples arrived at the main laboratory in Memphis, TN (Oxford Diagnostic Laboratory) within 36 hours. However, reproducibility of the test could be influenced by lot-to-lot variability, intrinsic immunomodulation due to patient comorbidities, variable release of interferon-gamma, microbial contamination of blood samples, or blood-storagetemperature variation and other factors. [23-26]. The reasons for the variability in results thus remain to be yet fully understood.

As observed by others, the analysis of the effect of CD4 T-cell counts on the quantification of the T-SPOT®. A TB result was not statistically significant [19,22,27]. It is important to note that this cohort of HIVinfected patients was not in an advanced stage of their HIV/AIDS disease and had medium to elevated levels of CD4 cell counts (90% >200 cells/mL).

The results of our study showed that the T-SPOT®.TB results were independent of the level of immunosuppression status in HIVpositive patients. This was different from previous observations where that led to the conclusion that TB screening test performance is only meaningful in HIV patients with a cell count >300 [28-30]. Thus, there may be other factors that affect the test performance.

T-SPOT®.TB test results are independent of the immunosuppression status of patients with HIV. Prognostic biomarkers other than HIV viral load and CD4 cell count may explain the progression or lack thereof of TBI to TB disease in this endemic setting. Clinicians specializing in HIV/AIDS and TB may repeat the T-SPOT®.TB test as means of determining true sensitivity in selected cases and better identifying patients with unequivocal TBI. The propensity for change in the T-SPOT®.TB from borderline to negative and the rate of reversion from positive to negative validates the importance of the test’s borderline category. The variations observed in some test results may impede screening for TBI at a clinical level. The reasons for these variations in interferon-gamma release assays warrant further understanding and review. Nevertheless, its limitations notwithstanding, targeted screening with IGRA, especially in this cohort, remains the backbone of TB control.

The authors wish to acknowledge Dr. Lynn Besch, LSUHSC Section of Infectious Diseases, for her review and suggestions related to the preparation of this manuscript.

Copyright: © 2017 Frontini M, et al. This is an open-access article distributed under the terms of the Creative Commons Attribution License, which permits unrestricted use, distribution, and reproduction in any medium, provided the original author and source are credited.