Collection, Isolation and Proliferation of Bone Marrow Cells of Rat

Copyright: © 2015 Sánchez-Robles MJ, et al. This is an open-access article distributed under the terms of the Creative Commons Attribution License, which permits unrestricted use, distribution, and reproduction in any medium, provided the original author and source are credited.

Today it is known that bone marrow cells are a potential for treatment a wide variety of diseases, among which stand those of hematological origin and neurologic. They are regarded as a valuable source for the treatment of affections neurological. The present work is related with obtaining bone cells (osteoblasts) and its proliferation. The fact is emphasized the extraction of the femur´s cells of a Wistar male rat of exocrianza with a practical method developed from Laboratory Animal Unit Experimentation, and the obtaining cells was performed in the Laboratory of Health Research Center, both laboratories belong to the Faculty of Medicine of the Autonomous University of Coahuila, Saltillo Unit.

The cell tissue culture has its origins in the nineteenth century as a method for studying the behavior of animal free cell systematic changes occurred within the organisms during normal homeostasis and under the stress of an experiment. These techniques started with growing not disaggregated tissue fragments, which restricted the mitosis of cultured cells and therefore growth. After the cultures were performed with tissue disintegrated fragments, which increased the cell growth in culture used as dispersed cells.

The development of vertebrate cell culture began with observations Roux [1] chicken embryo cells, later nerve tissue frog was cultured which later was replaced by chicken plasma; subsequently, this technique was applied for the study of warm-blooded animals.

A series of innovations, the use of antibiotics, trypsinization techniques for the transportation of cells and the supplementation of the medium with fetal bovine serum, allowed the development of cell cultures of vertebrate origin.

Nowadays, can be cultured in the laboratory cells from a wide range of different tissues and organisms which today have a high scientific interest, e.g., in relation to investigations on the cell cycle. The controlling growth of tumor cells and the modulation of gene expression [1].

The cell culture is very suitable as a model for the study of development and differentiation, so the cell lines that preserves the ability to differentiate in vitro they are the subject of intense study. There are also certain types of research that cannot be performed without cell culture e.g., working with transgenic animals, which leads to mature organisms express new genes [2,3].

Bone marrow cells (osteoblasts) are an important alternative source, with a high level of reliability for cell transplantation, where needed generation of damaged tissue. In the last decade it has been used embryonic cell material as a source of stem cells, but the disadvantage use of stem cells is their limited availability [4,5]. Another source of stem cells or progenitor cells is bone marrow which it is a composed tissue of immature cells called stem cells which are designed to form the blood, and transform in one of three types blood cells: white blood cells attacking infections; red blood cells transporting oxygen in the body and platelets that help the blood from coagulating.

Chopp et al. demonstrated that transplantation of bone marrow cells into rats after spinal injury, resulting in higher recovery from the second week of transplantation, by demonstrating cells from bone marrow have already been implemented successfully in the handling of spinal cord injury.

Several isolation protocols and culture osteoblastic cells have been used successfully in rats and rabbits, but mostly use very expensive reagents and sometimes it is hard to find in existence [6-8]. This study has the objective to establish a procedure of isolation, survival and growth osteoblasts from a Wistar rat.

For extraction of the femur cannula was used, pentobarbital to anesthetize the rat, depilatory cream to remove hair in the area extracting the femur, tube with conical bottom with screw cap and saline solution to maintain fresh the joint.

The equipment used for surgery femur was the laminar flow hood with UV lamp, (Veco). For sterilization of surgical material it was used an autoclave (All American, 25X-1). Centrifuge (Eppendorf 5402) to wash the cells; for observation and counting of cells an optical microscope (Zeiss, Standard 25). Culture, proliferation and survival an incubator with air / CO2 (95/5%vol, Isotemp, Fisher Scientific), and inverted microscope platen (Nikon, ELWD 0.3/0075) to observe cells.

This activity was performed in a laminar flow hood with aseptic techniques necessary according to the following procedure:

Is anesthetized the rat with 5 mL of pentobarbital in segments of 1 mL supplied each 5 min intraperitoneally; depilatory cream is applied to remove the hair in the area using aseptic and antisepsis techniques; It shaves the area that covers the femur and iodine foam is applied to disinfect the area. Subsequently an incision of about 2 cm in length is performed. The joint is located and is done manually the disarticulation; the distal joint is identified, also performed manually for complete extraction dislocation of the femur, placing it in a tube with saline for preservation. The same procedure for the contralateral side is performed (Figure 1). 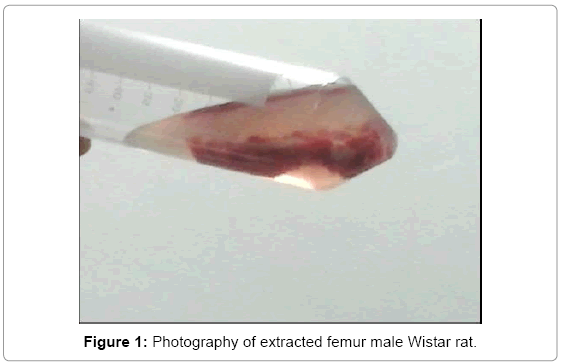 Once removed the two parts, the cutting is performed both epiphysis and bone marrow extraction is performed with cannula and finally per sweep with PBS 1X, for direct placement on PBS. After having bone marrow immersed in serum, it is washed 3 times with PBS 1X, using the centrifugation technique at the temperature of 4ºC during a time of 10 min at 2000 rpm.

The supernatant is discarded, and the precipitated is resuspended in culture medium Dubelco´s Modified Eagles (DMEM), complimented with antibiotic-antimycotic at 1% in a culture bottle type Roux to which were added 7 mL of culture containing 6.93 mL DMEM and 0.7 mL of antibiotic-antimycotic plus cellular precipitated. Ten bottles were cultured in an incubator with CO2 in dry and sterile conditions with a proportion of 5% of CO2 and a constant temperature at 35°C during 18 hr.

The presence of cells in the culture was verified, and the absence of bacteria and fungi was revised micro and macroscopically, then proceed to change the culture medium in each bottle. Bottles are labeled 1 to 10. For do the change of culture medium, it is removed; the cells are washed with buffer solution PBS 1X, pH 7.3; and new, fresh media is added (DMEM + 1% antibiotic).

After of removed medium is centrifuged to see if there is the presence of living cells without adhering to the bottle, and the presence of precipitate was observed in each tube. The precipitate from the same primary culture is recovered of 5 tubes and placed each separately in sterile culture bottles containing 7 mL of medium. Secondary Roux bottles are labeled from 1.1 to 1.5.

A change of medium it is performed again in the primary bottles (1 to 10) and secondary (1.1 to 1.5), and incubated with the same technique during 5 days and the next phase the medium is removed, cells were washed with PBS 1X to remove the residues of the medium and added 5 mL trypsin-EDTA, and incubated until the film it peel, which occurs normally between 7 y 10 min.

An aliquot of the suspended cells is taken for staining and the trypsinization process stops adding 2 mL of DMEM added with 1% of antibiotic-antimycotic and transferred again the bottle incubated. The aliquot taken is stained with trypan blue (4X) for further observation in a Neubauer chamber observed under an optical microscope at 40X the presence of isolated stained cells in the cell wall and nucleus. However, the number of cells observed it was not enough to carry out a count per quadrant. A medium change is performed every 5 days for the preservation of cells during 4 weeks.

At day 28 after this step, a changing culture medium it is performed adding Fetal Bovine Serum (in 1: 1 ratio compared to DMEM), being the ratio 3.5 mL of FBS, 3.5 mL DMEM + 1% antibiotic-antimycotic. With the aim of promoting a rapid cell proliferation, considering that the proportion must be 1:10, it was decided to use a 1:1. On day 35 after the first change of medium and 7 days after the addition of SBF it is trypsinised for cell counting with Neubauer chamber with trypan blue, observing high cellular proliferation over the surface of the Roux bottle (Figure 2). 2 drops (20 μL) trypan blue (dye ) were placed on a piece of parafilm. The aliquot was taken from the culture was mixed with the trypan blue and it was transferred a Neubauer chamber (hemocytometer). The hemocytometer was observed in the optic microscope, being counted as viable cells which were deposited in the 4 large squares in every corner of the hemocytometer (Figure 3). 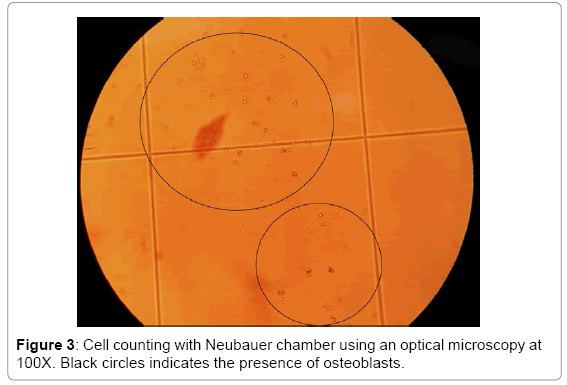 To determine the number of cells per unit volume (mL) the formula described by Aquiahuatl et al. was used [9].

In this study, cell viability was facilitated by using one of the methods particularly simple, and it is tested with trypan blue, which has the main characteristic to enter the cell when it is damaged and color it blue [10]. Figure 4, it is observed the identification of cells viable and non-viable where most cells are viable, because they are unstained (cytoplasm). It is also observed that cell morphology is spheroidal. 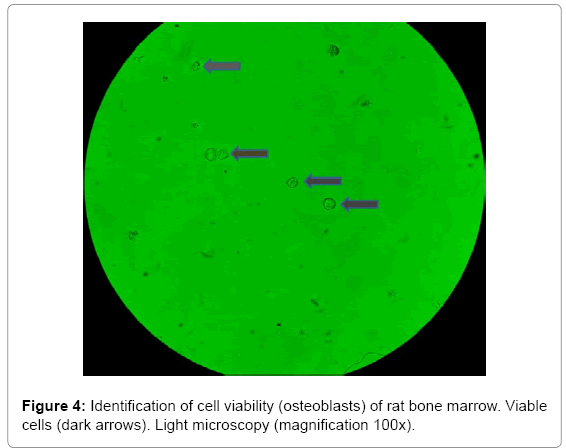 Culture, isolation and proliferation of cells

After identifying viable cells, the osteoblast culture was performed, during a time of 8, 14 y 27 days (Figure 3). These cells were cultured and proliferated on the surface of the Roux bottle, forming a thin film which is caused by protein secretion by the cells. The formation of this film indicates that the cells are anchored and dispersed in the glass or plastic are grown through slight negative charges [1].

After 8 days of survival of osteoblasts, the surface of the culture bottle was observed in the inverted platen microscope, where it was possible to see dispersed cells with a spheroidal morphology [5]. Nevertheless, cells not entirely covered the entire surface of the culture bottle, reason why they were kept in incubation and were fed for 6 days. During these 14 days of incubation, the cells were in a medium consisting of PBS, DMEM with antibiotic for survival and proliferation. After this time a thin film formed on the surface of the bottle, it is clearly observed against backlight. Using the inverted platen microscope an increase cell proliferation was observed with respect to that obtained during the first 8 days. At the same time, the anchored osteoblasts in that film not covering the entire surface of the bottle. Therefore, culture medium was added fetal bovine serum (SBF), which it was replaced every third day, to complete 13 days (additional 14 days mentioned above). Under the above, the thin film was found to be considerably notorious, also covering the walls of the bottle. This proliferation was confirmed by the inverted platen microscope. Later, it proceeded to trypsinization and staining of osteoblasts for cell counting with the Neubauer chamber which was a total of 29,500 cells/mL (Figure 5).

The technique for obtaining cells used Saltillo unit, proved to be effective and practical. The use of inverted platen microscope unequivocally identified the cells in culture media [11-13]. The study showed that osteoblast proliferation after 14 days an elevated cell proliferation is obtained. Besides, the use of fetal bovine serum and culture medium Dubelcco´s Modified Eagle’s (DMEM) are an important factor for the growth of bone marrow cells of rat.

The authors gratefully acknowledge the support of CONACyT-Mexico for the scholarship 34796. In addition, this work was supported by CONACyT-Mexico under the project CO2-44830.