Background: The aim of this study was to determine the level of knowledge about colorectal cancer (CRC) in adult healthy individuals in Eastern Province of Saudi Arabia. The main point of the current study was the need to increase the level of awareness of CRC to establish a link between the public, health centers and educational institutions to spread the awareness of CRC.
Setting and design: Survey/questionnaire.
Patients and methods: Random, adult individuals 18 years old or more in Al-Dammam, Saudi Araba. They were approach to participate in a questionnaire about CRC. The questionnaire (either paper or online), consent forms, and the questionnaire were developed in the Arabic language. Data were analyzed by demographic criteria, including age, gender, marital status, and level of education, to determine if there are any difference between them. Statistical analysis: Data were analyzed using Statistical Package for Social Sciences version 21 (SPSSv21).
Results: In total, 402 respondents completed the survey. Most respondents believe that screening for colorectal cancer should begin before the onset of the symptoms (70%). Less than 30% of all respondents believe that red meat is a risk factor for CRC, diabetes (18%), and family history (53%). Their answers were varied according to the education level. Even though, there were some misconceptions in more educated people.
Conclusion: Although older individuals and those with higher education tended to answer questions correctly more often, there is a need to improve the knowledge about the disease and its screening tools in order to encourage them to go through these tests. A national education program in Saudi Arabia is recommended to improve CRC knowledge.

Colorectal cancer (CRC) is a cancer that starts in the colon or the rectum. These cancers also can be named colon cancer or rectal cancer, depending on their site. Colon and rectal cancer are often grouped together because they have almost the same features [1]. The incidence of colorectal cancer has become an increasingly recognized disease and could lead to death or get unwanted side effects with chemotherapy [2,3]. In 2012, CRC was the third most common cancer globally with incidence close to 1.4 million cases [4]. It is the second and fourth most common cancer in females and males, respectively, worldwide [5]. In Saudi Arabia, it is the most common cancer among males (10.6%) and third among females (8.9%) [6]. The highest incidence rates found in Australia, North America, Western Europe and Japan [7]. The incidence was low in Africa, Asia and South America. Although the Kingdom of Saudi Arabia [KSA] considered a low incidence rate of CRC, the disease is second most common cancer in KSA after breast cancer [8].

While the incidence of CRC in Saudi Arabia was increased in the period between 2001 and 2006, the numbers of cases were increase for both genders and in different ages [9]. CRC can be easily prevented through CRC screening which can detect it in an early stage [10]. In order to create targeted messages and educational material aimed to increase the number of participants in the screening, it is required to understand the levels of knowledge, attitudes, behaviors and beliefs of the target population [11] poor knowledge about CRC risk factors and the benefits of screening programs are potential barriers for active participation in screening campaigns [12].

Geographic differences for CRC incidence explained by dietary and other environmental exposures [13]. This information is provided by some researches of migrants moving from low-risk to high-risk areas [14]. A higher risk of CRC was found in consuming a low fiber diet [15] and rich in meat [16] and fat, [17] physical inactivity, and excess body weight [18]. Non-dietary causes include genetic predisposition [19]. Since the incidence of CRC in Saudi Arabia is high, the aim of this work is to determine the level of knowledge and attitude of CRC and its risk factors among people who are living in Al-Dammam city, Kingdom of Saudi Arabia.

A quantitative, cross sectional study, carried out with random selection, adult individuals 18 years old or more in Al-Dammam, Saudi Araba. They were approach to participate in a questionnaire about CRC. The questionnaire (either paper or online), consent forms, and the questionnaire were developed in the Arabic language following a standard format [20]. The permission was taken from the College of Medicine, King Faisal University, in Saudi Arabia.

A total of 402 individuals participated from 434 for the study. The consent was taken from all of them. The including criteria for the current study were all adult individuals above 18 years old who were living in Al-Dammam city of Saudi Arabia. Individuals who were not able to provide written constant were excluded from study (Table 1).

Socio-demographic information was summarized in Table 1. Men constituted 40% while female constituted 60%. Mean age was 31 with standard deviation of 10.7. Age was ranged from 18 to 70 years. 67% of participant were married, while 53% had university degree or above. 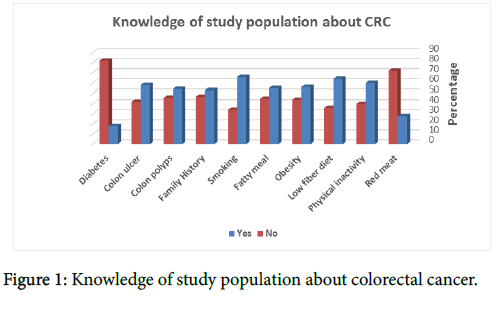 This study was in the period from July to November 2015. 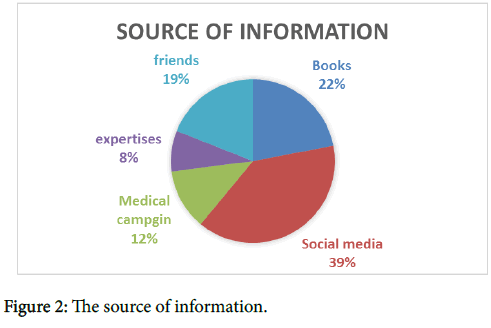 Figure 2: The source of information.

About 70% of respondents were agreeing to screen about CRC before the symptoms of the disease appear. About 82% of respondents have not been diagnosed or their families for CRC.

As regards the practice of screening for CRC; almost 90% of respondents did not do colonoscopy before. While 14% of them had fecal occult blood test as shown in Table 2.

We attempted in this study to evaluate awareness of CRC, including, risk factors, screening, in relation to age, gender, level of education, and marital status. This study focus on adult people who were living in Al-Dammam city of Kingdom of Saudi Arabia. It focuses on their awareness and attitude toward CRC. It could be crucial to policy, heath workers and educators who are responsible for preventable campaigns.

Generally, most respondents aware of the location of the colon and its function, but they knew little about its risk factors. However, more educated respondents and older age [statically] are more aware of risk factors (Figure 2).

Figure 2 shows the main sources of getting information. Most of the respondents choose the social media (39%) as the source of having new information about CRC.

Among respondents females are more aware than males. Almost all cases of CRC can be prevented with early detection [21] and postgraduates and those between the ages of 50 years and above responded correctly more than other groups. Most of the respondents choose social media as the main source to get new information. Globally, men are at higher risk to develop CRC in their life [22]. Married individuals have more information than single individuals. In addition to the difference of knowledge between males and females, we think that some knowledge of females imparting to males after marriage. Thus, educate both male and female important to improve the knowledge especially for whom at high risk.

Even more than half of the respondents have a good knowledge about CRC, their behavior does not reflect their knowledge in practice. Since about 60% of respondents were agreed that physical activity could reduce the risk of CRC, more than 65% of them were physically inactive (Table 2). Dietary habits have a major impact in developing CRC an evident among response mentioned questionnaires. Even though, less than 30% had changed their dietary to be healthier because of the fear of developing CRC.

These findings in this study showed that 82% of respondents believed that it is possible to prevent CRC if detected in early stage (Table 2), which is a good sign in encourage people especially who are at high risk of developing CRC and subjected to perform screening tests. This believes was significant in developing a positive attitude toward CRC screening tests. Further, current result showed that the respondents need more information about the disease to improve their attitude toward its screening.

Motivation to perform the screening in order to diagnose CRC at an early stage is very important. From our findings, there seems to be poor response to CRC screening that is unrelated to age or gender or involved in the early screening. Both screening tests Fecal Occult Blood Tests [FOBT] and Colonoscopy were adopted by less than half the respondents who had undergone screening, there was slight difference in doing FOBT or colonoscopy which may indicate that the current practice of CRC screening in Saudi Arabia needs more encouragement through the raise of awareness about the importance of these screening tools for disease prevention and its management. There is a need to make more effort to make the community screening of CRC through different ways with a hope that it will decrease the incidence of the disease in Saudi Arabia.

The data available from this study among people who were living in Al-Dammam on different levels of knowledge, attitude and screening of CRC, the more educated individuals, those who are aware of family history of CRC, its detection and prevention.

The main point of the current study was the need to increase the level of awareness of CRC to establish a link between the public, health centers and educational institutions to spread the awareness of CRC. Therefore, presentation of a clear picture of CRC, its detection, with more emphasis should be given on the screening tests of CRC required for the prevention of disease in early stage at all levels of individual.

I acknowledge with thanks to prof. Dr. Nirmal Baral for his valuable suggestions.

Copyright: © 2016 Alnuwaysir M, et al. This is an open-access article distributed under the terms of the Creative Commons Attribution License, which permits unrestricted use, distribution, and reproduction in any medium, provided the original author and source are credited.