Comparison of Short-Term Outcome between Laparoscopic and Open Appendectomy in Adults: A Meta-Analysis of Randomized Controlled Trials

Methods: We undertook a meta-analysis of randomized controlled trials comparing open appendectomy and laparoscopic appendectomy in adults. We searched the PubMed, EMBASE, and Cochrane Library databases up to June 20, 2017. Calculations were made of the effect sizes of short-term outcomes: wound infection, intra-abdominal abscess, postoperative complications, peritonitis, postoperative ileus, urinary tract infection, and reoperation, the effect sizes were then pooled by a fixed or random-effects model.

Results: Twenty-nine randomized controlled trials with 4311 participants were included. Meta-analysis of the available literature demonstrated that laparoscopic appendectomy in adults was associated with lower incidence of wound infection (OR=0.54, 95% CI: 0.42-0.70, P<0.00001), and fewer postoperative complications (OR=0.77, 95% CI: 0.66-0.90, P= 0.001). Further analysis did not reveal significant differences between the two surgery approaches in intra-abdominal abscess, peritonitis, postoperative ileus, urinary tract infection, and reoperation in adults.

Appendicitis is the most common cause for acute abdominal pain with a life-time incidence between 6.7% and 8.6% [1,2]. It is also the most common emergency in abdominal surgery [3]. Since 1889, when Mc Burney first reported appendectomy as the treatment for acute appendicitis, surgical intervention has been the standard treatment strategy for acute appendicitis [4]. Open appendectomy (OA) performed through the right lower quadrant incision was first described in 1894. It has become the standard treatment of choice for acute appendicitis, remaining mainly unchanged for 100 years due to its favorable efficacy and safety. The evolution of Endoscopic surgery led to the idea of performing appendectomy via laparoscopy; this was first described by Semm in 1983 [5]. It’s has gradually gained acceptance. However, there remains a continuing controversy in the literature regarding the most appropriate method of removing the inflamed appendix.

We conducted a search of PubMed, EMBASE, and Cochrane Library databases till August 25, 2017 using a mix of the following keywords: appendicitis, appendectomy, laparoscopic, and laparoscopic and open appendectomy/appendicectomy. Two investigators independently reviewed all relevant studies. Eligible trials were then selected according to the inclusion criteria below. Discrepancies were resolved, if necessary, by discussion and consulting a senior reviewer.

Inclusion and exclusion criteria: Published randomized controlled trials researches are going to be involved in the present meta-analysis on reaching the criteria as follows:

(a) A prospective randomized study format only. (b) A comparison of laparoscopic and open appendectomy. (c) The study reported at least one of the desirable outcomes mentioned below. (d) Studies with human adult participants.

(a) Non-randomized studies. (b) Pediatric participants. (c) When replicated researches were published, merely the research having huge specimen size was involved.

Data extraction and quality assessment: Two authors independently extracted data from all eligible studies: first author, country, year of publication, sex of subjects, age, size of the appendectomy (laparoscopic vs. open). The Jadad scale was used to evaluate the overall quality of all included articles [18]. According to Kjaergard et al. recommendation, low-quality studies have a score of ≤ 2 and highquality studies have a score of ≥ 3 (Table 1) [19].

Table 1: Main Characteristics of 29 studies included in our meta-analysis.

Statistical analysis: The strength of association was calculated by risk ratios (RRs) with 95% confidence interval (CI), comparing the laparoscopic appendectomy group with the open appendectomy group. Use of the Q-test and I2 statistics was made for quantifying statistical heterogeneity. The use of random-effect framework was made once the heterogeneity was significant (P<0.05) or else, the fixed effects framework was utilized. The sensitivity analysis performed by sequentially excluding any individual researches one by one, with an objective of examining the impact of each individual research or summarized findings. Furthermore, use of the Begg’s funnel plot and the Egger’s test was made for estimating the publication bias (P

The selection mechanism of entitled research works has been displayed in Figure 1. 1011 considerably significant research works were primarily attained from databases of the PubMed, EBMASE, and Cochrane Library. After eliminating duplicate articles, we evaluated the titles and abstracts of these studies according to the inclusion and exclusion criteria, after which 61 articles remained. After the full texts of these articles were read and the ineligible studies were excluded, 29 randomized controlled trials involving 2134 laparoscopic appendectomy (LA), in addition to 2177 open appendectomy (OA) [10-15,19-41]. The characteristics of these studies are listed in the Table 1. 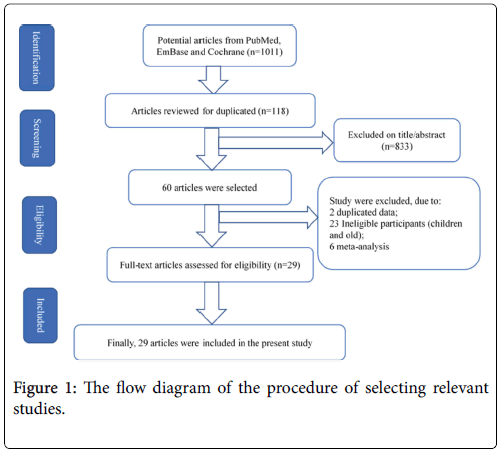 Figure 1: The flow diagram of the procedure of selecting relevant studies. 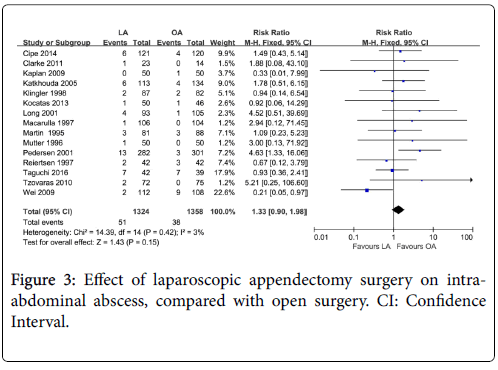 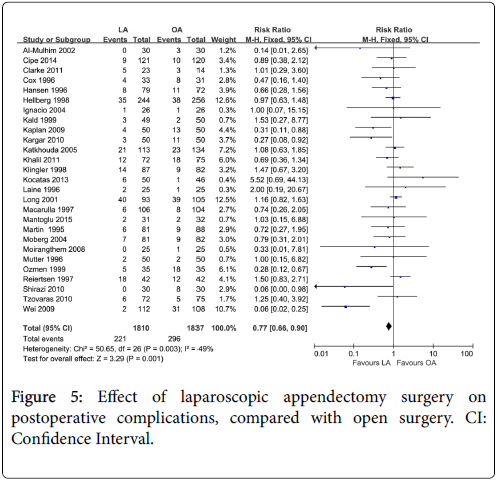 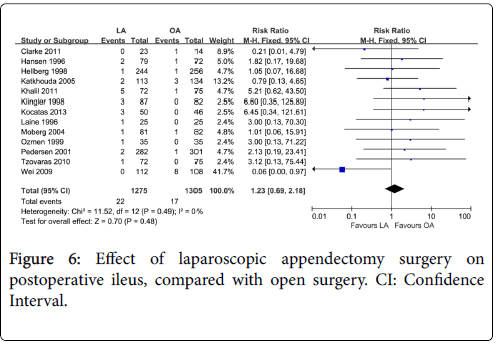 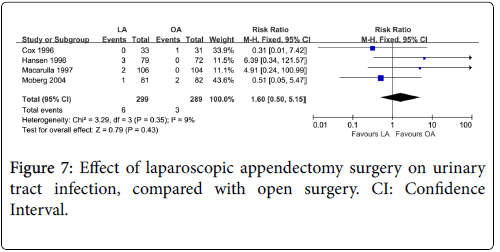 The sensitivity analysis was performed by sequentially excluding any individual researches individually, with an objective of examining the impact of every single research work on summarized findings. Consequently, as revealed by the findings of the sensitivity analysis, our findings exhibited statistical robustness and credibility (data not shown). The shapes of the funnel plot seemed symmetrical (Figure 9), suggesting that there was no obvious publication bias. 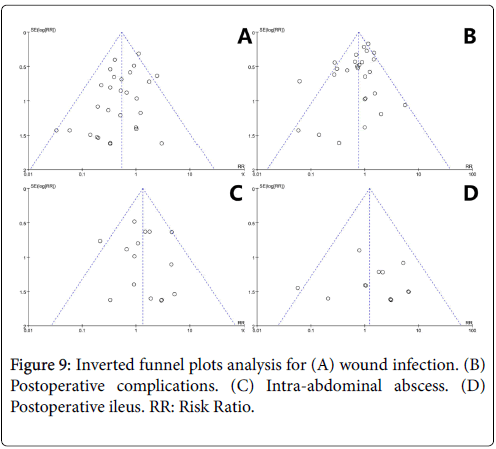 Meta-analysis is a useful statistical tool that can be used to evaluate the existing literature in both quantitative and qualitative ways by comparing and integrating the results of different studies, taking into account variations in characteristics that can influence the overall estimate of the outcome of interest. It is especially valuable when previous studies have been unable to show significant differences between treatments because of small sample sizes, or when there is no consensus of opinions. The results of the present meta-analysis demonstrated that, when compared with open appendectomy, laparoscopic appendectomy in adults was associated with lower incidence of wound infection, fewer postoperative complications, and there was significantly statistical difference between the two groups. However, laparoscopic appendectomy in adults was associated with slightly higher incidence of intra-abdominal abscess, peritonitis,postoperative ileus, urinary tract infection, and reoperation, and there was not statistical difference between the two groups.

This study has several limitations. First, the different operation methods were performed by different surgeons in different countries; thus different learning curves may have contributed to the reported difference between the two procedures. Second, not all the studies measured data based on a double-blind. In the absence of a doubleblind, subjective variables could be considerably influenced by the enthusiasm for a novel technique. Third, there was variation in surgical techniques and treatment protocols amongst the studies, and therefore heterogeneity in the studies might exist.

In conclusion, the present meta-analysis demonstrated that laparoscopic appendectomy provides considerable benefits over open appendectomy, including lower incidence of wound infections, and fewer postoperative complications. Therefore, the laparoscopic is a useful tool in the treatment of acute appendicitis and worth recommending as effective and safe procedures for adults.

The authors claim to have no conflict of interest.

Copyright: ©2017 Zhang H, et al. This is an open-access article distributed under the terms of the Creative Commons Attribution License, which permits unrestricted use, distribution, and reproduction in any medium, provided the original author and source are credited.