The study aimed to characterize the major cardiovascular risk factors using Framingham Risk Score (FRS) among Saudis. A cross-sectional study was conducted to investigate the expected 10 years FRS for cardiovascular diseases (CVD) among Saudi subjects. In the present study there was a significant association between the 10 years risk of developing CHD and BMI. The results revealed an increase in BMI contributing to significant increase in the 10 years risk of CHD among males. The overall distribution of FRS among males regardless the BMI category as a percentage of the total male subjects revealed that males were at low, medium and high CHD risk of 71.4%, 14.27% and 14.3%, respectively. However, female subjects showed 91.5%, 4.8% and 3.6% at low, medium and high FRS, respectively. Moreover, significant increases in the Odd ratio amounting to 4.58 and 5.24 among intermediate and high risk males in comparison with female ones, respectively. BMI strongly correlates with the expected 10 years FRS for CVD. Also there is a gender specific susceptablity for CVD risk among Saudi males compared to female ones. Socioeconomic, behavioral, awareness about healthy choices and genetic characteristics of obesity should be taken in consideration since extrapolating other population&rsquo;s studies to Saudi one might be misleading.

One of the most widely used 10-years risk assessment methods for the prediction of coronary heart disease is the Framingham risk score (FRS). High frequency of sedentarism and overweight/obesity might increase the CHD risk prevalence. The aim of the study was to characterize the major cardiovascular risk factors using FRS among Saudi outpatients attending King Fahd hospital at Madina, Saudi Arabia.

A cross-sectional study was conducted in Madinah, Saudi Arabia. Adult Saudi outpatients attending King Fahd hospital at Madinah, aged 20-70 years were recruited randomly and spontaneously agreed to take part of the study. The study was performed on 167 individuals (83 female and 84 male). The study was approved by the Ethics Committee of the King Fahd Hospital, Madinah, Saudi Arabia for collecting the sample. All participants signed the free and clarified consent term according to Helsinki declaration. A questionnaire was checked prior to the participant leaving the study centre. Demographic data, anthropometric assessment, disease history and FRS parameters were determined. Inclusion criteria include self-identity as Saudis. Pregnant and/or breastfeeding, chronic diseases (cancer, heart disease, stroke and renal) subjects as well as those treated with hormonal replacement therapy, steroids and hypolipidemic agents were excluded.

The FRS sheets were used to determine the 10-year risk of CHD [14]. For each subject included in the present study, a separate sheet was used to determine the FRS. The total score was calculated by summation of the points associated with the patient's age, cholesterol, HDL, smoking status, systolic blood pressure and diabetes mellitus either treated or untreated. The total points were computed by summing all the points for the risk factor profile. Then 10-year CHD risk was determined according to the score points. The required parameters were included and the correlation of risk of developing CHD and obesity has been analyzed and calculated [14].

Subjects who were currently smoking or had quit less than one year previously were classified as smokers. Non-smokers were classified as those who had never smoked or who had quit more than one year previously. Height was recorded in centimeters on a calibrated height board; weight was recorded in kilo-grams by means of a standard calibrated weighing scale and body mass index (BMI) was calculated and expressed as kg/m2. Obesity was defined as a BMI P30. Blood pressure and pulse rates were measured by automatic dynamap. Hypertension was defined as systolic blood pressure P140 mmHg or diastolic.

Statistical analysis was performed using Statistical Package for the Social Sciences (SPSS) version 21 software (SPSS Inc., Chicago, IL, USA) which was used for statistical analysis. We used Kolmogorov- Smirnov test of normality to check if data of BMI and FRS were normally distributed or not? Data is not normally distributed, so the non-parametric Mann-Whitney test was used to compare between males and females. Statistically significant difference is considered at a P-value of less than 0.05.

Regarding the cardiovascular risk factors among male and female subjects, the results showed 31% and 23.8% smokers, 21.4% and 16.7% with diabetes mellitus (DM), 20.2% and 15.5% with hypertension (HTN) and 8.3% and 2.4% for diabetic/hypertensive ones, respectively (Table 1). Based on six risk factors: gender, age, total cholesterol and HDL levels, systolic blood pressure (BP), smoking habit and diabetes, the FRS was calculated for each subject included in the present study. The BMI distribution among the enrolled subjects revealed 14% for normal healthy weight and 43% for either overweight or obese depending on their BMI calculation (Figures 1, 2 and Table 2). 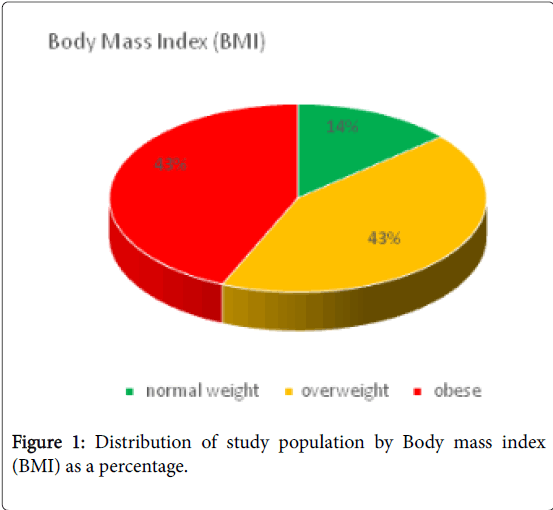 Figure 1: Distribution of study population by Body mass index (BMI) as a percentage. 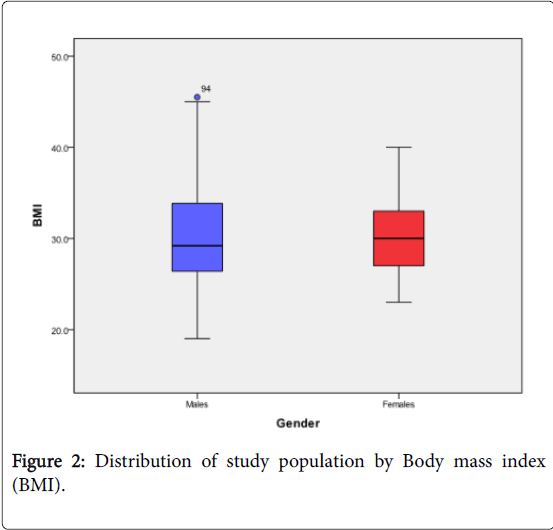 Table1: Prevalence of risk factors by percentage among Saudis by gender, current smoking, diabetes and/or hypertension.

Our results revealed that there was a significant increase in the cardiovascular disease risk among males showing overweight and obese amounting to 5.95% and 8.32% for intermediate risk and 4.76% and 7.14% for high risk ones, respectively. Moreover, obese males showed significant increase in the percentage of those with high FRS. In parallel, the female subjects showed the same pattern regarding increase in low FRS percent with the increase in BMI. Also, the probability of high cardiovascular disease risk increased among female obese subjects amounting to 3.6% which was significantly lower than that reported for the high risk obese male ones. Interestingly, intermediate and high FRS was significantly higher among those overweight and obese males compared with those females of the same BMI category (Figures 3 and 4). 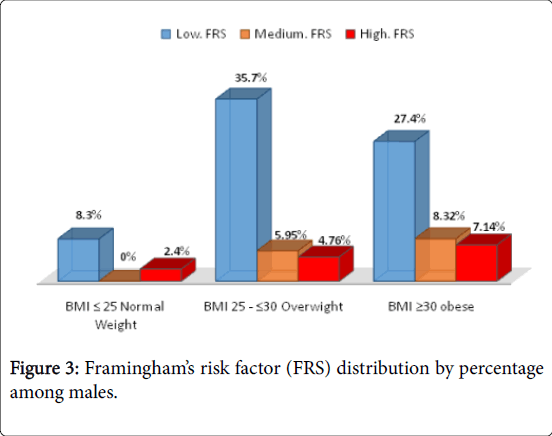 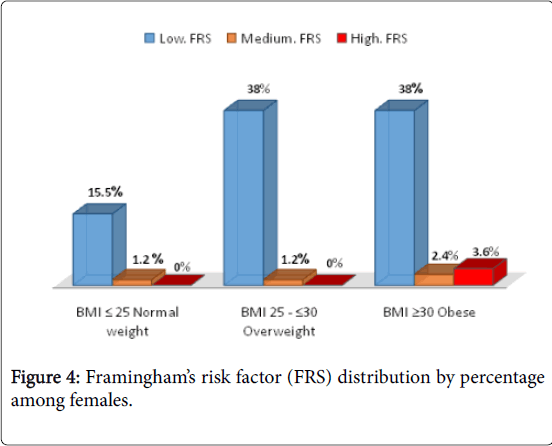 Table 5: Correlation between FRS and BMI among subjected included in the present study.

Moreover, remarkable significant increase in the median FRS among males compared to females over all BMI distribution categories.

Cardiovascular disease (CVD) is the leading cause of mortality and morbidity worldwide, and developing countries representing the main contributors to this increase [15]. As CHD is considered a global health problem and has an association with hypertension, obesity and physical inactivity as preventable contributory risk factors [16]. Abate [10] reported that individuals need to try to reduce their obesity risk so that they may reduce the risk of a number of chronic diseases, including diabetes, hypertension and CVD.

Saudi Arabia, considered a rapidly developing country, faces progressive urbanization and the fast adoption of a western lifestyle contributing to rise CVD burden [17]. Significant proportion among younger aged population is at increased risk for the development of hard coronary heart events [3,18]. Our results revealed that there was a significant increase in the cardiovascular disease risk among males showing overweight and physically inactive obese [19].

Moreover, the present study showed that obese males showed significant increase in the percentage of those with high FRS which are in accordance with those reported by Ford et al. [20]. In parallel, the female subjects showed the same pattern regarding increase in low FRS percent with increase in BMI.

Interestingly, intermediate and high FRS was significantly higher among those overweight and obese males compared with those females of the same BMI category. This could be attributed to the clustering of either diabetes and/or hypertension among Saudi males. Our results are in accordance with those reported by Hetari et al. [9]. Obese adults without CVD may already have a clustering of traditional cardiovascular risk factors [9,21].

The prevalence of obesity among subjects of the present study represents 43% which is in accordance with that reported previously [22,23], emphasizing the importance of changing the lifestyle to reduce the CVD risk among Saudi population. Our results revealed that the vast majority of Saudi females were at a low risk for the 10 years risk of CHD. However, the increase in male’s BMI significantly increased low, medium and high 10 years risk of CHD among males. Table 3 showed significant high risk of developing CVD at intermediate and.

Table 3 showed significant high risk for developing CVD at intermediate and high FRS levels (P<0.001), in addition to significant correlation with the relevant BMI (p=0.006) among Saudi male subjects in comparison with those female ones. Thus gender variable showed preferential risk for the 10 years risk of CHD among Saudis requiring validation of FRS to be suited for Saudi population. In the present study male subjects had a significantly higher CVD risk than did the female ones. These results are in accordance with those reported by Huang et al. [24]. The present study revealed a significant increase in the Odd ratio amounting to 4.58 and 5.24 among intermediate and high risk males in comparison with female ones, respectively.

It is proposed that acculturation contributes to excess weight gain due to adaptation of dietary patterns [25] and physical inactivity habits towards unhealthier choices. Acculturation might contribute to exacerbating chronic disease conditions at a greater rate among men in comparison with women. Gender disparities revealed the effect of acculturation on health which could be attributed to the lower tendency of men to use health care services [26]. These findings are in accordance with our results figures 2 and 3. Body mass index (BMI) provides a measure of obesity, and is a predictor of fatness-related health risks [27].

Using the risk stratification approach as an indicator rather than emphasizing results of each individual cardiovascular risk factor will help in improving the awareness of health workers and beneficiaries on the joint adverse effects of clustering cardiovascular risk factors on cardiovascular health, and the importance of addressing all of them as a package [28]. Poor physical activity level of adult Saudis negatively impacts their health related-quality of life [12,21]. Hussein et al. [29] addressed a significant association between CHD risk and physical activity as well as BMI. High and increasing prevalence is probably the result of interacting genetic, environmental and behavioral factors notably diet and lack of exercise. Regrettably, no information on either of them was obtained in the present study.

It seems to focus intervention on younger generations who appear to have higher risks than their parents. This could be due to survival of healthier elderly, but more likely reflects the impact of the new affluent “Western” lifestyle experienced by the young generations whose parents grew up in less affluent. The FRS in this population is a cause of concern provided that it is validated for this population [30,31]. Tools and strategies designed to aid obese individuals to encourage weight loss or prevention of further weight gain may be more effective if better tailored to be gender oriented programs and policies. Efforts should be made to establish comprehensive national policies regarding cardiovascular risk factor screening, especially earlier screenings for diabetes and hypertension aiming to reduce the economic burden [32].

In conclusion, this study highlights the clustering of many traditional preventable risk factors that require lifestyle modification to jeopardize the increased risk of CHD. Holistic health promotion’s programs should be considered when planning strategies to raise awareness about the preventive measures aiming to reduce the CHD risk among Saudis.

Moreover, continue to validate the FRS among Saudis since extrapolating other studies among non-Saudi populations might reveal misleading results taking in consideration the socioeconomic and behavioral and awareness about healthy choices as well as genetic characteristics of obesity. Awareness about the benefits of physical activity as a preventive measure might ameliorate clustering of traditional risk factors contributing CHD risk. The high proportion of risk factors mandates the conduct of community based surveys for early recognition and prevention of CHD and associated risk factors to reduce their impact.

The authors thank all individuals at King Fahd Hospital, Madina, Saudi Arabia for providing access to the patients' information used in this study.

Copyright: © 2017 Saad SY, et al. This is an open-access article distributed under the terms of the Creative Commons Attribution License, which permits unrestricted use, distribution, and reproduction in any medium, provided the original author and source are credited. 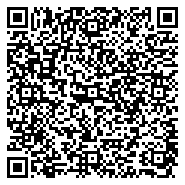